Starring Chris Evans as the titular patriotic superhero, Captain America: The Winter Soldier is that rare sequel that's, frankly, better than its predecessor, thanks to a strong, intelligent plot. The 4K Ultra HD Blu-ray arrives with a great-looking 4K HDR10 presentation and a fantastic Dolby Atmos soundtrack, but the same set of supplements as previously. Nevertheless, the overall UHD package is Recommended for loyal fans.

For me, bringing in the Russo Brothers to helm a superhero film was possibly one of the smartest things Marvel Studios did. Before their directorial involvement, the Marvel Cinematic Universe was a simple family-fare popcorn yearly event. But with Captain America: The Winter Soldier, the filmmakers steered the MCU in a new direction, elevating the blockbuster series into a more thoughtful and culturally aware action franchise with complex, weighty plots. In this ninth entry to the MCU, the script by Christopher Markus and Stephen McFeely (Avengers: Infinity War, Avengers: Endgame) took inspiration from classic espionage and conspiracy films to tell a story about our hero, the otherwise blindingly patriotic Steve Rogers (Chris Evans), discovering government machinations violating the ideals he defends. Basically, I rank this sequel as one of the best and surprisingly most intelligent installments of the entire MCU, along with Black Panther and Thor: Ragnarok, while also being terrifically entertaining. 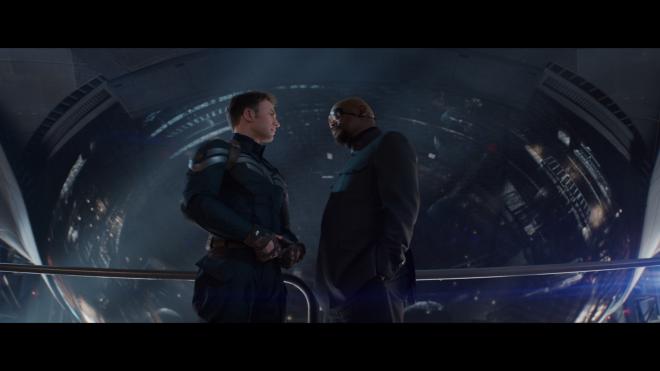 For a more in-depth take on Captain America: The Winter Soldier, check out our original Blu-ray review HERE written by Michael S. Palmer.

Walt Disney Studios Home Entertainment brings Captain America: The Winter Soldier to Ultra HD Blu-ray as a two-disc combo pack with a flyer for a Disney Digital Copy. When redeeming said code via RedeemDigitalMovie.com or MoviesAnywhere, users should access to the 4K UHD digital version in Dolby Vision HDR with Dolby Atmos. The dual-layered UHD66 disc sits comfortably opposite a Region Free, BD50 disc. Both are housed inside a black, eco-vortex case with an embossed, glossy slipcover. At startup, viewers are taken directly to the start of the movie. 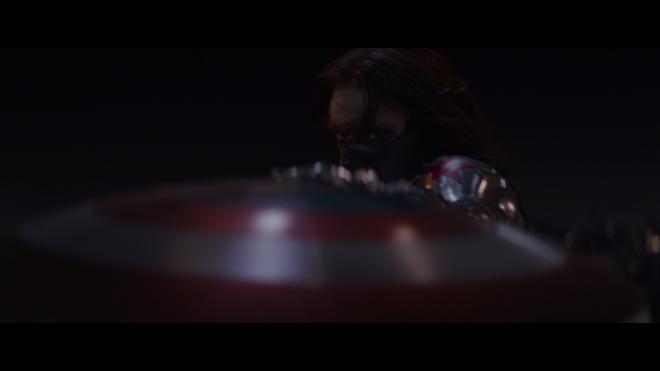 The Cap fights in the justice halls of Ultra HD with an excellent and often-stunning HEVC H.265 encode that greatly surpasses its Blu-ray predecessor in some areas while also seeming comparable in others.

Originally shot on digital HD cameras and later mastered to a 2K digital intermediate, the upscaled transfer enjoys an appreciable uptick in overall definition and clarity, which is most apparent during close-up shots that reveal pores, minute wrinkles and negligible blemishes in the cast. The thick, dense stitching and threading in the Cap's and Falcon's uniforms are plainly visible while the minor imperfections of several buildings, city streets, and various other locations are distinct. Tiny debris in the many action sequences is unmistakable, and individual strands of hair in the perfectly combed hairdos are sharp. However, the CG action sequences remain about the same as its HD peer, looking a tad softer than its best moments, and there are several instances of mild aliasing along the sharpest edges.

Still, the real win in this 2160p video is the improved contrast and brightness, displaying a slightly more vibrant and energetic picture overall. Admittedly, it's not a strikingly dramatic difference when comparing to the 1080p version, but generally, the photography enjoys crisper, more resplendently whites to give several moments that desired looking-through-a-window effect. More noteworthy are the brilliantly radiant specular highlights, supplying a tighter, dazzling glow in the hottest areas and reveal better fine details, such as the plume of every explosion and gunshot, while making light glisten off metallic surfaces with extraordinary realism, like Winter Soldier's mechanical arm. At the same time, black levels are extraordinarily dynamic with excellent gradational difference between the various shades, bathing the 2.40:1 image with rich, velvety shadows that never obscure the finer details in the darkest portions and providing a lovely cinematic quality from beginning to end.

Similar to the contrast, the 4K presentation equips the Cap's rebellion with enhanced colors, but the results don't necessarily offer a significant jump from its HD SDR counterpart, as the differences between the two are subtle and nuanced, furnishing the action with fuller and slightly more animated primaries. The Captain's iconic uniform is a darker navy color with a few shades of admiral and cobalt blues, but the central star is a sort of silvery, almost-reflective grey. Meanwhile, reds are of a candy rose and cherry ruby tone that pops, and the greens in surrounding foliage are more energetic and vivid. More appreciable are the secondary hues, which arguably, benefit the most from the HDR10 process, animating nearly every scene with a lovely, picture-perfect warmth and richness, especially in the fiery-red oranges of each explosion. Flesh tones are a bit more accurate, showing a better peachy-rosiness in the cast with lifelike complexions and textures throughout. (HDR10 Video Rating: 84/100) 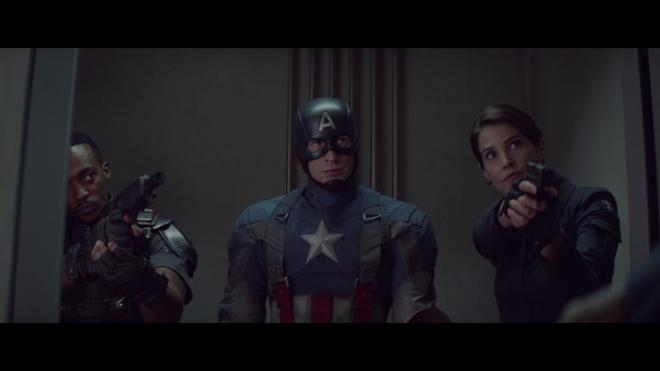 The fight for freedom crashes home theaters with an impressive and highly-satisfying Dolby Atmos soundtrack that nicely complements the action-packed visuals.

Similar to its DTS-HD MA 7.1 counterpart, imaging is terrifically engaging and expansive with lots of background activity that keeps much of the film within the front soundstage. A sharply detailed mid-range exhibits superb clarity and differentiation between the softest and loudest segments. However, compared to the lossless mix, the extra-breathing room offers a slight improvement with a tad better channel separation and balance across the entire screen with marvelous off-screen effects while maintaining precise, well-prioritized vocals in the center. Several moments come with effects that discretely move into the top heights, creating an awesome half-dome wall of sound. The low-end is powerful and responsive with a couple authoritative, wall-rattling moments, providing the various explosions with ample, reverberating presence.

On the whole, rear activity is often more silent than not, which is not an entirely bad thing since the fronts and top heights do much of the heavy lifting with the focus on character interaction and dialogue. Nevertheless, the surrounds and ceiling channels burst to life when debris rains down everywhere and the shotgun blasts ring all around. As would be expected, the climactic battle delivers some demo-quality material as Falcon flies from the front to back and from one side of the room to the other while the Helicarriers drone overhead. This same action sequence reveals superb directionality and flawless panning, generating an immersive hemispheric soundfield. Quieter moments come with subtle atmospherics, like birds chirping in the distance or the commotion of busy city streets. Henry Jackman's score arguably makes the best use of the format, lightly bleeding into the front heights and sides for expanding the soundscape and ultimately making for a fantastic listen at home. (Dolby Atmos Audio Rating: 88/100) 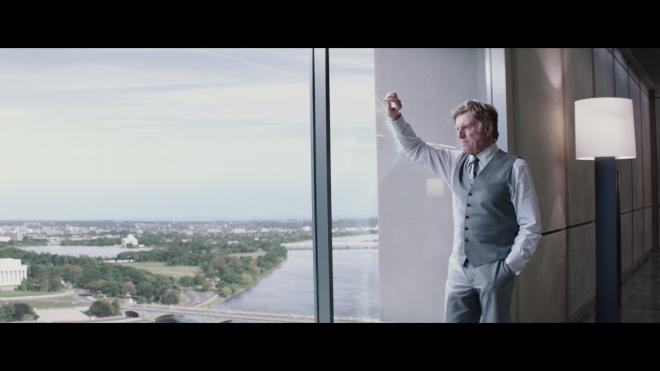 The Ultra HD arrives with the same collection of bonus material as the Blu-ray, which can be read in more detail HERE. 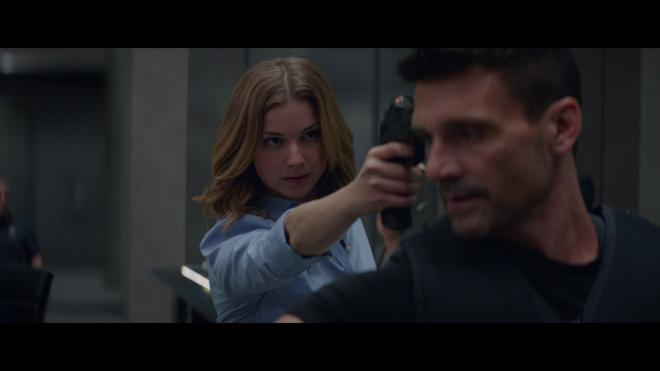 The Russo Bros.' Captain America: The Winter Soldier remains one of the best and smartest installments in the entire MCU. Starring Chris Evans as the titular, blindly patriotic good ol' boy, this follow-up is the rare sequel that surpasses its predecessor, a superhero entry that transcends genre trappings and expectations with an intelligent, espionage-inspired plot galvanized by sociopolitical commentary.

The 4K Ultra HD Blu-ray fights for freedom with a great-looking 4K HDR10 presentation that notably improves on its Blu-ray counterpart, and a fantastic, near-reference Dolby Atmos soundtrack. With the same set of supplements as the previous release, the overall UHD package is nonetheless Recommended for loyal fans.