Growing a bit long in the tooth after sixteen films, Thor: Ragnarok takes a small detour from the MCU by turning in one of the funniest and most satisfying entries within the franchise, full of vibrant color and animated humor that essentially feels every bit like a comic book movie without also seeming schlocky. The second sequel in the Thor storyline enters the Ultra HD arena with a great-looking 4K HDR presentation, an excellent Dolby Atmos soundtrack and a small, entertaining set of supplements, making the overall package Recommended for fans and UHD collectors.

Thor: Ragnarok marks the seventeenth motion picture within the Marvel Cinematic Universe while also being the third entry in the standalone Thor storyline. And part of the film's sheer awesomeness is that it feels fresh, novel, and wholly separate from the other movies making up the MCU. It is especially a massive improvement after the lukewarm, if not somewhat disappointing, The Dark World. When a franchise starts becoming predictable and growing fairly long in the tooth, we need something of this caliber, a production willing to takes risks with the material and transporting audiences, particularly those fans intimately familiar with the original source, into unexpected territory. Sporting a new hairdo, this Thor (Chris Hemsworth) sees his mighty hammer Mjolnir destroyed, his father Odin (Anthony Hopkins) lost, and learns he has an older sister named Hela (Cate Blanchett), the goddess of death. There are lots to unravel and confront, made all the worst by being stuck on an alien planet while evil dear old sister now rules Asgard.

From New Zealand-born filmmaker Taika Waititi, who gave us the splendidly hilarious horror comedy What We Do in the Shadows, Thor's desperate quest to escape the scavenger planet Sakaar and the twisted gladiator games of the Grandmaster (Jeff Goldblum) is showered with vibrantly animated and energetic colors that perfectly capture a cartoonish comic-book feel without being cheesy or schlocky. Working with the talented photographer Javier Aguirresarobe, Waititi deliberately goes for the shoddy visual stylings of 80s sci-fi films, reminiscent perhaps of The Ice Pirates, Tron, The Last Starfighter or Flash Gordon, aided by the electro-sounds of Devo co-founder Mark Mothersbaugh. The director also makes excellent use of Hemsworth's comedic talents, unafraid of turning the hero either into a swaggering clown or making him the butt of the joke, be it in the witty banter with the Hulk/Bruce Banner (Mark Ruffalo) and the legendary Asgardian warrior Valkyrie (Tessa Thompson) or physical pratfalls. Ragnarok is an absolute joy! 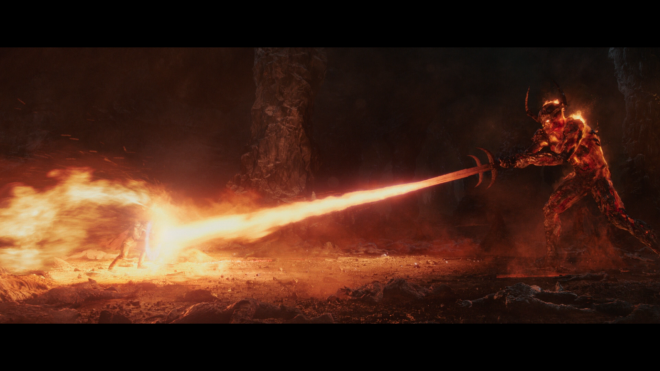 For a more in-depth take on the movie, you can read our review of the VUDU 4K UHD with Dolby Vision.

Walt Disney Studios Home Entertainment brings Thor: Ragnarok to 4K Ultra HD Blu-ray as a two-disc combo pack with an UltraViolet Digital Copy code, which can be redeemed via RedeemDigitalMovie.com or MoviesAnywhere for access to the HD SDR version while VUDU users can have the 4K digital version with Dolby Vision and Dolby Atmos. But as past experience has shown, this will vary between users. Inside the black, eco-vortex case with a glossy, embossed slipcover, the dual-layered UHD66 disc sits comfortably opposite a Region Free, BD50 copy. At startup, viewers are taken directly to a static screen with the usual selection along the bottom and music playing in the background.

While Hulk is like a raging inferno on Blu-ray, Thor is more like a quiet, smoldering fire on Ultra HD, which is still a good thing thanks to a great-looking HEVC H.265 encode that offers some noteworthy improvements while taking a few less-than-stellar hits along the way.

Immediately apparent, viewers will quickly note the uptick in definition and overall resolution. It's not always consistently razor-sharp, like its HD counterpart, but there is better clarity of the individual threads in Thor's cape, the depressions and pockmarks of Skurge's armor, and the extra-fine stitching in Hela's skin-tight outfit. One can really appreciate the amount of work and creativity that went into building some of the architecture on Asgard and Sakaar, exposing the tiniest features and imperfections of the elaborately-decorated palaces and the littered streets. Some of the CG work, sadly, looks a tad softer than the live-action footage while the green and blue screen effects are made more apparent. There are also many instances of mild aliasing along the edges of buildings and stairs, some more blatant and distracting than others, and occasionally, the outline of characters against a bright background in wide shots can look somewhat noisy. Not too bad to score it down any further, but it is visibly there nonetheless.

Presented in its original 2.40:1 aspect ratio, the freshly-minted digital transfer was likely taken from the same 2K digital intermediate source used for the Blu-ray although the film was shot on cameras capable of 4K and 6K resolutions. Contrast is spot-on with immaculate, pitch-perfect whites, but the 2160p video isn't really any brighter overall. In fact, it's about the same as the HD SDR version. On the flip side, specular highlights gain a notable boost with the hottest spots looking tighter and narrower, allowing for a bit more detailing in the fluffy clouds and a clearer distinction within each laser fired while also giving the Asgardian armor a nice silver shine that realistically gleams in the light. Meanwhile, the rest of the 4K presentation enjoys richer, inkier blacks throughout with outstanding gradational differences between Hela's silky hair, her lustrous outfit and her thorny, almost onyx-like helmet. Shadow detailing is equally superb, exposing the tiniest object within the darkest scenes corners, such as the opening sequence with the fire demon Surtur in Muspelheim.

However, the real winner in this grand battle for Asgard is the amazingly colorful visuals and beautiful photography of Javier Aguirresarobe, bringing the cartoon-like wackiness and action to a mesmerizing effect. The cinematography comes with a vast, extensive palette that animates every scene, from Thor's red cape showing a deeper, fuller shade to the neon greens of Hela's skintight costume having an emerald-like shine. The baby blue of the Grandmaster's flashy outfit is of a more noticeably different shade than the slightly darker colors used for the buildings or the sunny bright sky. Sumptuous secondary hues provide another layer of animation, lavishing certain sequences and conversations with the golden yellows of palaces or showering faces with a fuscia glow from lights when the walls are actually more magenta. The Sarkaar portals are a combination of hot pink and violet, some of the garbage is a vibrant cerulean cyan, the Aurora borealis-inspired light display of the Bifröst Bridge is a feast for the eyes, and Surtur's lava-like body now reveals shades of fiery orange fading into buttery yellows with brilliant, radiant white at the center.

Thor struts into the Contest of Champions with a solid Dolby Atmos soundtrack, but once again, the lord of sparkly fingers doesn't walk out the arena as the champion. He holds his own, for sure, swinging a few sound effects discretely through the ceiling channels, occasionally generating a welcomed dome-like immersion fans are sure to find thrilling. But for an action-packed Marvel movie, the overheads and surrounds are, at times, somewhat lackluster, which was also an issue on its DTS-HD counterpart.

There are several great moments where certain atmospherics flawlessly pan from the sides to rears and across the overheads, such as when Thor waits for his hammer to travel from a distance just before battling Surtur or when he waits for his umbrella to crash through every room in Dr. Strange's house. The sudden thundering bursts of lightning also fill the space above the listener, expanding the soundfield nicely, but such moments are ultimately far and few in between, leaving behind noticeable pockets of silence. In the end, much of the action seems largely reserved for the soundstage and surrounds, filling the room with the cheers, applause and sighs from the crowd in the arena while the space above remains fairly quiet, leaving the music to do much of the real work.

Similar to the DTS-HD track, the low-end doesn't leave much of an impression, especially when compared to the first Thor movie, leaving a couple action sequences a bit wanting. Overall, bass is adequately responsive with an appreciable weighty punch, staying focused within the mid-bass range with a couple minor moments that dig a tad deeper but at very low decibels (bass chart). The design exhibits excellent clarity and distinction, but weirdly, it doesn't feel as though the upper frequencies are pushed very hard and the overall volume seems low. After raising the volume to -5 from reference, the entire front soundstage feels broader and more expansive. Various sound effects convincingly fill the off-screen space and fluidly move between the three-channels without fail while also never drowning out the vocals, which maintain top priority.

The overall quality of this lossless spatial mix is still highly engaging and loads of fun, in spite of the small aforementioned drawbacks.

Audio Commentary: Director Taika Waititi can't seem to help himself being the endless comedian, providing one of the funniest commentaries in a long while, making it a definite listen for fans.

Director Intro (HD, 2 min): Viewers have the option of enjoying a bit of Waititi's silly humor before starting the movie where he sarcastically explains his creative intentions and the film's unexpected influences.

Finding Korg (HD, 8 min): Waititi returns for another comedic piece on his creative choices, praise for his work behind the camera, providing the voice for Korg and the character's role in the film.

Sakaar: On the Edge of the Known and Unknown (HD, 8 min): Piece dedicated to discussing the planet, its unique attributes and any relevant information related to the plot.

Getting in Touch with Your Inner Thor (HD, 7 min): Star Chris Hemsworth talks a bit about the character, his evolution through the films, the changes made for this second sequel and Hemsworth's performance.

Journey into Mystery (HD, 6 min): Quick breakdown on how the plot fits into the MCU timeline, the original sources that influenced this film and the intent behind the 1980s visual style.

Team Darryl (HD, 6 min): Next in a series of comedic shorts with Thor's ex-roommate bunking with the Granmaster.

Marvel Studios: The First Ten Years - The Evolution of Heroes (HD, 5 min): Series of interviews providing a brief history on the MCU, the characters and lead up to the new Infinity Wars.

Thor: Ragnarok takes a risk by deviating from the Marvel Cinematic Universe with one of its biggest franchise heroes. And the gamble pays off, delivering barrels of laughs along with mesmerizing visuals. With an ensemble cast reprising their roles from previous films while also introducing several new characters, director Taika Waititi excellently balances the witty comedy with imaginative action in a straightforward story that doesn't detour from its objective, making it one of the most satisfying entries in the MCU. Although the Ultra HD doesn't quite deliver the knockout punch expected, the 4K HDR presentation and Dolby Atmos soundtrack are nonetheless a visual and aural treat that will keep owners absorbed. With a small but still entertaining set of supplements, the overall package is Recommended for fans and UHD collectors.

Sale Price 17.99
List Price 39.99
Buy Now
3rd Party 13.84
In Stock.
See what people are saying about this story or others
See Comments in Forum
Previous Next
Pre-Orders
Tomorrow's latest releases