In Avengers: Endgame, directors Anthony and Joe Russo accomplish the impossible, assembling an ensemble cast from various story threads of the MCU into a single coherent, surprisingly emotional plot that satisfyingly concludes an epically ambitious saga. The final chapter in the Infinity Saga comes to a close on Ultra HD with a beautiful 4K HDR10 presentation, an enjoyable Dolby Atmos soundtrack but a somewhat light set of supplements. Nevertheless, the overall package is Highly Recommended for the UHD film library.

We have also reviewed the Blu-ray Disc HERE.

What Marvel Studios has accomplished with Avengers: Endgame is nothing short of phenomenal, a remarkable feat in filmmaking and cinematic history. Over the course of several films, starting with Joss Whedon's The Avengers, each entry to the Marvel Cinematic Universe not only expanded on an incredibly engaging fantasy of superheroes into a massively inflated world where those same superheroes interact with one another -- but they have also been patiently and meticulously building towards this moment, with each installment upping the stakes of its predecessor and persuading audiences into expectations that could not possibly be met. Yet directors Anthony and Joe Russo, working from a script by Christopher Markus and Stephen McFeely, miraculously pull off the impossible and satisfy those expectations marvelously. Realistically, a movie of this magnitude with such a vast ensemble cast of characters should not exist let alone be as terrifically entertaining as it genuinely is.

Of more interest and fascination, for me, is seeing the MCU become a gigantic mainstream cultural phenomenon, significantly impacting storytelling expectations while reigniting a love for the Hollywood blockbuster. These films have once again turned the theater experience into a cinema event, an outing with friends to revel in the newest Tinseltown attraction that's fodder for the watercooler chitchat the following day. More fascinating still, this ambitious fantasy epic is essentially a return to the classic film serial of old, the weekend matinee where devoted fans relish with giddy delight at the latest adventure of their larger-than-life screen hero. MCU movies are greeted by excited audiences dressed in costume eager for another action-packed escapade, teased about the next episode by a post-credits scene that's really the modern-day cliffhanger, and they cheer, laugh, clap, yell and even shed a tear. I will admit to suddenly feeling like a feverishly thrilled child when a certain someone unexpectedly wielded a certain magical hammer and when that same certain someone finally said, "Avengers, assemble!" 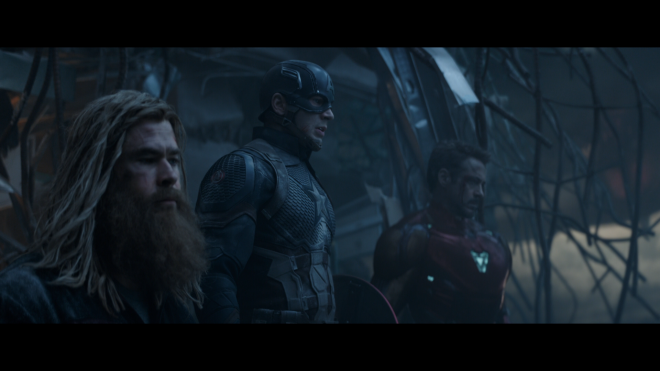 At the center of this monumental endeavor is Tony Stark (Robert Downey, Jr.), a second-tier comic character who over the last ten years, has risen as the face and emotional marrow of the entire franchise. Without realizing it until these last two installments, this has been Stark's journey -- a pompous, egotistical industrialist who also happens to be a genius navigating and negotiation his way through the repercussions of his arrogance, greed, and decisions. Through the course of several movies, he has been haunted by his past and challenged by the consequences of a hubris clouding his judgment. And his Iron Man alter ego is basically a metaphor for masking his fragile psyche and his reluctance to make the tough choices, as Captain America (Chris Evans) pointed out in The Avengers. This is what ultimately makes the climactic conclusion so heartbreaking because we've been with him on this journey to becoming a better person from the beginning, and he's earned a well-deserved rest.

Other characters also enjoy a moment of closure and a sense of redemption in their respective hero journeys, particularly that of Evans' Cap, Thor (Chris Hemsworth) and Hulk (Mark Ruffalo), making the Endgame title all the more on point and poignant. The premise of our heroes doing a time heist allows them this opportunity in the most ingeniously imaginative and effective ways, both hilarious and surprisingly moving. And as per Marvel formula, the grand finale to the aptly-named Infinity Saga is littered with allusions subtly recalling a decades-worth of movies leading up this point while hysterically brushing away the logic of the plot by name-dropping other time-traveling movies. Along with bathing the screen with spectacularly stunning visuals beautifully photographed by Trent Opaloch, the Russo brothers successfully turn a three-hour behemoth into an emotionally exhaustive spectacle that feels like a genuinely satisfying end, as the thud of hammering fades away in the distance.

Walt Disney Studios Home Entertainment and Marvel Studios bring Avengers: Endgame to Ultra HD Blu-ray as a three-disc combo pack with a flyer for a Disney Digital Copy. When redeeming said code via RedeemDigitalMovie.com or MoviesAnywhere, owners unlock the 4K UHD digital versions in Dolby Vision HDR and Dolby Atmos audio. The dual-layered UHD66 disc sits comfortably opposite a Region Free, BD50 disc containing the movie and a second Region Free, BD25 disc with all the special features. All three discs are housed inside a black, eco-vortex case with an embossed, glossy slipcover. At startup, viewers are taken directly to a menu screen with full-motion clips and music playing in the background.

The Avengers heist time through the Ultra HD realm with an excellent and largely satisfying HEVC H.265 encode, offering several welcomed tweaks to an already marvelous Blu-ray. However, this 2160p version isn't quite the dramatic or significant jump expected, coming with a few poorly-resolved, very mildly noisy moments that are most apparent in wide shots. The movie is the first to be entirely shot on the Arri Alexa 65, capable of 6.5K resolution, but those elements were later mastered to a 2K Digital Intermediate, which was used for this home video edition. Nevertheless, the upscaled transfer comes with an appreciable uptick in overall definition and slightly sharper details in buildings and spaceships. There is also a bit more clarity of background information, and the stitching in costumes is a tad more distinct. The CG visuals maintain strong clarity as well, but they also tend to stand out a bit softer.

Interestingly, contrast levels don't receive much of a noteworthy boost over the HD version and are comparatively average to some of the best UHD releases. This may have something to do with the way Trent Opaloch photographed the movie, but contrast is lightly subdued and restrained, giving the visuals a grayish, somber overtone and making some scenes look rather flat. Yet whites are brighter and more vivid, popping with a radiant intensity in some spots. Better still, specular highlights glow with a crisper, tighter luminosity, allowing for slightly better detailing. Likewise, blacks are markedly inkier with great gradational variations in the various shades, providing the 2.39:1 image with a lovely cinematic appeal. Shadow delineation, on the other hand, can be a bit of a mixed bag, as much of the 4K video is notably darker. Occasionally, the murkiest corner can obscure the finer details during poorly-lit conversations.

The biggest and most appreciable upgrade in this HDR10 presentation is certainly the better palette, boasting a wider and more lavish array of colors. Granted, the difference between this and its HD SDR counterpart is a bit more nuanced than dramatic, but it's easy to see the improvement when our heroes visit Thanos at his idyllic cabin. The lilac purple tone in his face is fuller and distinctly dissimilar to the rich violet stripe down Nebula's face and the dark mauve of her outfit, and she also shows a dynamic arctic teal shade that's eye-catching. Captain Marvel is perhaps even more arresting as she glows an animated mix of electrifying blues and fiery oranges, and reds are a lush meld of ruby, crimson and metallic cherry rose depending on the character. And the climactic battle is just a smorgasbord of mesmerizing hues that make the action feel like a comic book come to life. (HDR10 Video Rating: 82/100)

The Avengers also assemble with an awesome Dolby Atmos soundtrack that provides a few welcomed enhancements over its DTS-HD MA counterpart fans will surely appreciate.

Similar to that lossless version, the movie opens with the soft, subtle sounds of rustling leaves and the wind blowing through trees while visiting with the Barton family, and Thanos's idyllic planet fills the room with the local wildlife fluttering and chirping all around. However, it doesn't take long to notice the surrounds perform much of the leg work, nicely enveloping the listening area with those aforementioned atmospherics. Occasionally, some of those effects bleed and travel through the overheads, generating a decently satisfying soundfield, but it never really comes across as convincingly natural or immersive. Still, the distant noise of a busy military base, the echoes inside space ships and the psychedelic noise when traveling through the quantum realm are pretty effective. And of course, the climactic battle is the best moment, as it erupts with debris scattering everywhere while heroes and monsters flying in every direction.

The strongest and best aspect of this object-based mix is in the front soundstage, as tons of background activity fluidly moves across the off-screen space and into the top heights, creating an awesome half-dome wall of sound. Imaging displays outstanding directionality and placement with notable clarity, feeling spacious and expansive throughout. The only area of complaint is a mid-range that comes off too bright in some spots and almost shrill in the upper ranges. Although action sequences maintain strong separation and details, the higher frequencies can be somewhat piercing and too sharp. Nevertheless, Alan Silvestri's score exhibits plenty of warmth and clean distinction within the orchestration, and the dialogue and character interactions remain precise and intelligible amid the chaos. Also, a powerfully robust low-end provides each explosion, gunfire and time jump with a wall-rattling impact and palpable presence that terrifically complement the visuals. (Dolby Atmos Audio Rating: 88/100)

For this Ultra HD edition of Avengers: Endgame, Disney and Marvel port over the same set of supplements as the Blu-ray and are spread out between two BD discs.

Directors Anthony and Joe Russo accomplished the impossible in Avengers: Endgame, assembling the largest ensemble cast of characters ever seen in a single movie while amazingly delivering a coherent, terrifically engaging and fantastically satisfying plot. Uniting several stories threads from various other movies of the Marvel Cinematic Universe into one gargantuan yarn, the final chapter to the Infinity Saga feels like a genuine, well-deserved conclusion to an epic fantasy adventure and to a host of characters audiences have come to admire, grow up with and see evolve over the last decade.

The epic saga comes to a close on Ultra HD with a beautiful and largely satisfying 4K HDR10 presentation and an enjoyable Dolby Atmos soundtrack, providing fans with a welcomed step up and a few nice enhancements over its Blu-ray counterpart. Considering the size and scope of this history-making production, the bonus features are disappointingly small, if not also somewhat lacking, but the overall UHD package is nonetheless highly recommended for the completist and makes for an awesome addition to any collector's film library.

Sale Price 17.99
List Price 39.99
Buy Now
3rd Party 27.99
In Stock.
See what people are saying about this story or others
See Comments in Forum
Previous Next
Pre-Orders
Tomorrow's latest releases