Peter Parker just wants to take a break from Spider-Man, as he travels with friends across the ocean in hopes of wooing a love interest in Spider-Man: Far From Home. It's too bad, though, because a new villain shows up to cause destruction and a kink in Peter's plans. With a wonderful 4K Ultra High Definition transfer, but a soft-sounding Dolby Atmos track - this film lacks originality even if some of the performances are good. Quite a few quick extras round out this release, making this new MCU film Worth A Look! 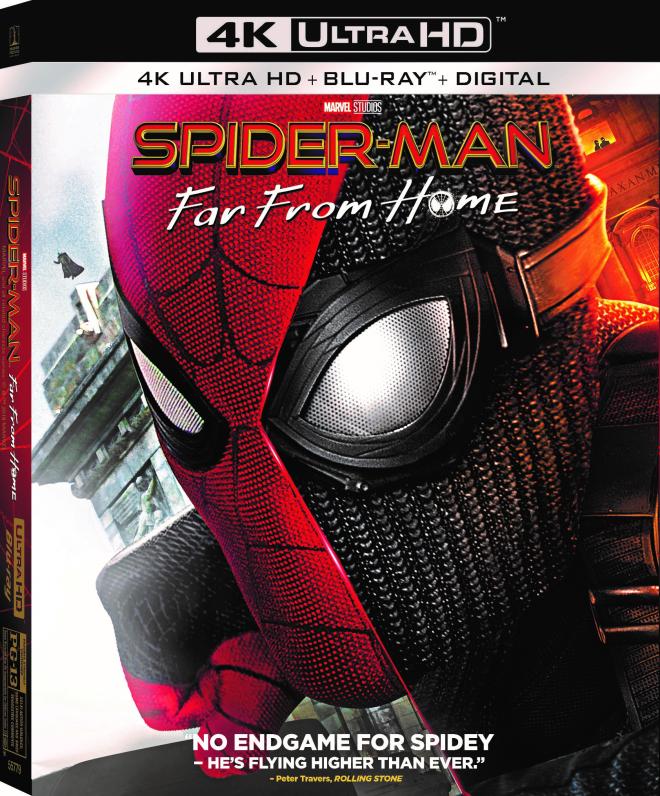 The uncomfortable romantic adventures of adolescent teenagers are where Spider-Man: Far From Home succeeds the most. This sequel to the most recent live-action Spider-Man reboot has everyone's favorite web-slinger, flying through decayed old buildings in Europe with a ton of shoddy and weak-willed action sequences. Where Tom Holland (Peter Parker) and MJ (Zendaya) play up their young awkwardness in revealing their feelings for one another, a new serious threat is on the horizon to make trouble for Spider-Man and a few other familiar faces from the MCU. The young couple have some humorous moments throughout that keep this coming-of-age action film moving forward, but without a good villain and, let's face it, Tony Stark, there is something major missing here, that makes everything less than stellar.

Spider-Man (Tom Holland) made his first MCU appearance in Civil War. Without going through the usual origin story, the masses took to Holland's portrayal of Spider-Man like ducks to water. After Endgame, Peter Parker just wants a nice vacation overseas with his best friend Ned (Jacob Batalon) and MJ, who he wants to take the next step with. As Parker travels with his classmates to Europe, Nicky Fury (Samuel L. Jackson) and Happy (John Favreau) try to enlist his help for another big mission, which Peter declines, even leaving his Spider suit at home with Aunt May.

Once in Venice, things kick into high gear when a giant storm takes the shape of a monster and starts to destroy everyone and everything in its path. Spider-Man tries the best he can to stop these major events, but it turns out this is just the start of something much bigger. Enter Quentin Beck (Jake Gyllenhaal), who goes by Mysterio. He flies around, has super strength, and easily stops the bad guys. He even has a cape. It's no secret either that Beck is behind this destruction, but for odd reasons.

Additionally, there are other misfires abound in the visual effects. You'd think that, with 22 films under their belt, the studio can make big CGI effects look interesting or real, but in Far From Home, they appear quite silly, including the elemental storms and destruction that they cause. With Mysterio as the film's central villain, there needs to be some sort of motive or connection that makes this character relatable. The reasons he gives never go beyond the surface level, rendering him boring and inconsequential, despite a good performance from Gyllenhaal.

The outcome of all this has some satisfying comedy and mild thrills with another great performance from Holland. The charm of the students' relationships and inept teacher chaperones make for some delightful scenes. It's only when the action segments pop up where things nose dive into the monotone territory. Samuel L. Jackson doesn't even seem to be enjoying himself anymore. A hero is only as good as their villain and in Spider-Man: Far From Home, both can't hack it. 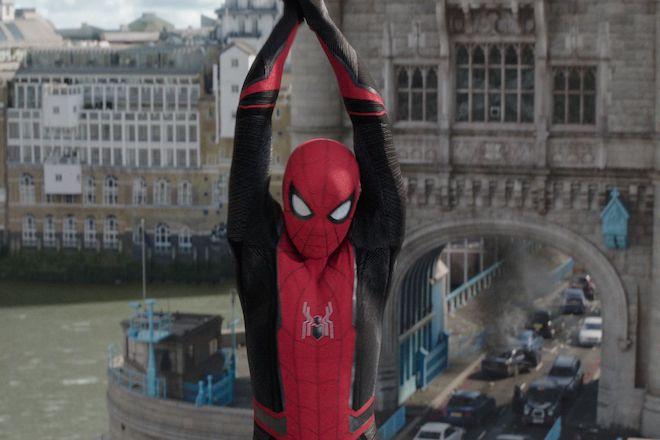 Sony's 4K UHD transfer of Spider-Man: Far From Home swings through the city with Dolby Vision HDR that, despite being a 2K upscale, offers distinct improvements over the standard Blu-ray.

The Dolby Vision presentation is often spectacular, revealing more nuanced colors that are rich and flavorful. Spider-Man's new suit has a bolder red that contrasts nicely with the decaying colors of Venice. The orange and yellow are crisper in the fire monster as Mysterio's neon green powers have a wonderful glow. Outdoor sequences in the light of day show the beautiful blue skies and green trees with varying shades of earthy tones. Black levels are strong at night time and in the new Spider-Man suit, while the skin tones are always natural.

The uptick in detail gives way to authentic facial features on all of the actor's faces. You can more clearly see the scars on Nicky Fury's face, along with intricate textures in each costume. The level of stitching and some of the CGI looks incredible here. Background buildings have all of the necessary attributes, such as cracked walls and dirt. And when the large elemental storms wreak havoc, the CGI detail whips up something fierce.

There were no major issues with banding or video noise, but a small hint of aliasing cropped up around the halfway mark, but quickly went away. With apparent upgrades in both color and detail, due to this amazing Dolby Vision option, the 4K version is the web you want to sling.

Spider-Man's Dolby Atmos track is certainly not at home. Like many Disney tracks, this Sony-released audio mix sounds soft, forcing me to turn up the volume higher than I should ever need to adjust it. Even when at an increased volume, this Dolby Atmos mix is far from satisfying.

Like most of the visual effects, this audio track is pedestrian and unimaginative without any sonic pleasantries. The big action segments where Spider-Man is slinging his way through bridges and avoiding debris should be full of atmospherics and big noises. That's not the case though. Everything is bland and without a powerful presence. There are a couple of times where big sounds with bass must be heard, such as a crane falling from the sky or a big explosion of hundreds of drones simultaneously blowing up, but instead, we get a fainter racket that never does the chaos on screen any justice. "With great power comes great responsibility." Someone missed that memo in the audio department here.

That all being said, the directionality and movement of voices and ambient noises of people on the street all sound robust and come through the rear speakers often. Again, you'll have to turn up the volume a bit to hear any of it. The height speakers add only a couple of audio effects here and there, mostly from a couple of pieces of falling debris and when Mysterio uses his magic to disguise his voice in multiple places.

Lastly, the dialogue and musical cues never approach a reasonable volume at a normal level, but when cranked up, you'll be able to hear these audio characteristics just fine, though you'll always be wanting something bigger, given this is part of the MCU. 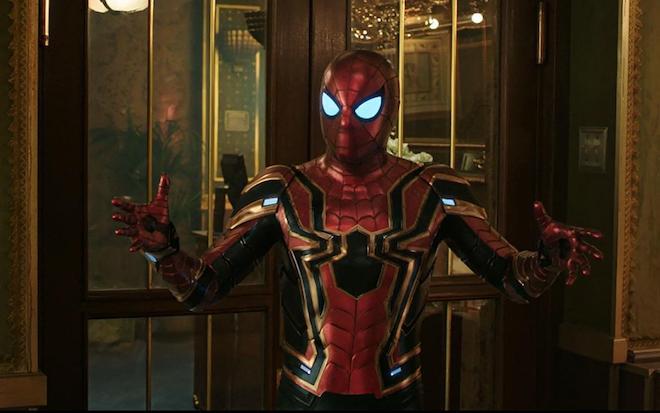 There are about 86 minutes of bonus feature included on this 4K Ultra-High Definition release. Most are just promo pieces of fun with no real insight or information available. A lot of these short segments could have been combined into one big extra. 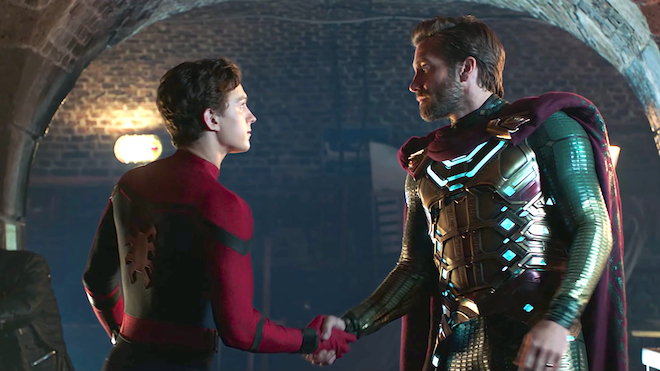 Spider-Man: Far From Home isn't the sequel we were hoping for. It feels lazy, uninspired, and not on par with the rest of the MCU. It seems like Endgame was indeed the end and Far From Home is the last gasp of air of something great, which is unfortunate. It's still nice to see Holland take care of this beloved superhero character and find him in love, but other than that, everything falls flat on its face, when it should be swinging for the skyscrapers. The 4K Ultra-High Definition transfer is gorgeous, but the Dolby Atmos track is something less than to be desired. There is a hefty helping of extras, none of which are important to the story or mythos. Worth A Look!

Sale Price 18.89
Buy Now
3rd Party 7.48
In Stock.
See what people are saying about this story or others
See Comments in Forum
Previous Next
Pre-Orders
Tomorrow's latest releases