Despite feeling rushed and somewhat piecemealed together, Captain Marvel is nonetheless wildly funny and visually dazzling with a marvelously inspiring plot at its core. The 4K Ultra HD Blu-ray crash lands into home theater shelves with a gorgeous 4K HDR10 presentation and an awesome Dolby Atmos soundtrack, but a disappointingly small set of bonuses. Nevertheless, the overall UHD package is Recommended for fans everywhere, making a nice addition to the MCU library.

For those who have been paying attention to the entire Marvel Cinematic Universe and the various threads interconnecting the many storylines, seeing Djimon Hounsou's Korath the Pursuer in Captain Marvel is a dead giveaway of the plot's direction and unsurprising twists. It is also evidence of what is both right and wrong with this latest installment to the ever-expanding franchise. But there is definitely more right outweighing the admittedly trifling wrong in this otherwise wildly entertaining prequel. Hounsou's cameo appearance follows Marvel's fondness for intertextual allusions as both a source of comedy and a means for affixing our heroes to a larger established universe, and for the most part, such in-joke references are clever enough to warrant a chuckle. The new logo intro with Stan Lee's many cameos and finding the legendary comics writer reading the script to Mallrats earns a heartfelt smile along with a tear.

However, this devotion to the company's tradition of nods and winks makes Korath's presence feel like a tacked-on addition, shoehorned into the plot to forcibly root it into the MCU. Given Brie Larson shot all her scenes as the titular intergalactic superheroine in Avengers: Endgame before there was a completed script for Captain Marvel, this origin story can feel a bit hurried. Nevertheless, the central theme of discovering her true potential and unleashing the inherent powers others, namely Yon-Rogg (Jude Law), have discouraged makes for a strong, engaging story. Set in 1995, watching her maneuvering through a male-dominated world like the Air Force is a joy, balancing the gravity with appreciable humor. Even while in badass mode, the metaphor of bounded and restrained, such her escape from Skrull leader Talos (Ben Mendelsohn), is used as a source of comedy. 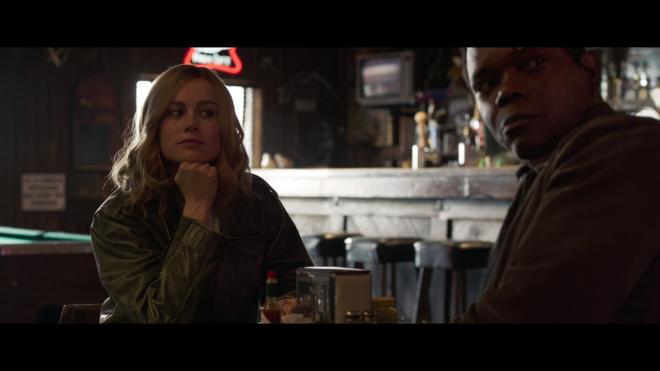 Still, her indestructibility from the onset poses a small and admittedly negligible problem in her arc, as it leaves little time for growth from Vers to Danvers to Captain Marvel. Neither our hero nor the audience is allowed to fully reflect on the betrayal she experiences during a key pivotal moment meant to be deeply emotional, quickly rushing us to choosing a costume and to a spirited climax. On the other hand, her sarcastic personality could be said to essentially hide her vulnerability, and in the highly-talented hands of Brie Larson, her quick wit is absolutely charming, immediately making her likable and relatable. Larson terrifically holds her own against such prominent MCU staples as Samuel L. Jackson, whose performance as a CG younger version of Nick Fury is a genuine highlight. Playing the sidekick comedic relief is a welcomed change of pace to his usual hardened, cynical super-spy. It's even more hilarious seeing Fury — don't call him by any other name — suddenly turn all soft and gushy for the adorable feline stowaway Goose.

Amazingly, in spite of that aforementioned character-arc quibble, directors Anna Boden and Ryan Fleck manage to deliver a fun piece of popcorn escapism, marvelously balancing the comedy with thrilling spectacle and some sensationally dazzling visuals. Overlooking the minor issues in the plot, the first female-led Marvel installment is a great deal of fun with an admirably inspiring heart, ranking somewhere in the middle of the massively 22-film franchise. Frankly, along with Black Panther and Thor: Ragnarok, this latest prequel installment to the MCU is a good start in the right direction for the series as a whole. And ultimately, Goose is the real memorable showstopper, a reference to Top Gun — perhaps this live-action Danvers' favorite movie, seeing as how she's a pilot — much in the same way Chewie from the original comics was inspired by Star Wars, Carol Danvers' favorite movie. The little furball also plays a pivotal role in the history of the MCU.

Walt Disney Studios Home Entertainment brings Captain Marvel to 4K Ultra HD Blu-ray as a two-disc combo pack with a flyer for a Disney Digital Copy. When redeeming said code via RedeemDigitalMovie.com, MoviesAnywhere or VUDU, it unlocks a 4K Dolby Vision HDR version with Dolby Atmos. The dual-layered UHD66 disc sits comfortably opposite a Region Free, BD50 disc. Both are housed inside a black, eco-vortex case with an embossed, glossy slipcover. At startup, viewers are taken directly to a menu screen with full-motion clips and music playing in the background. 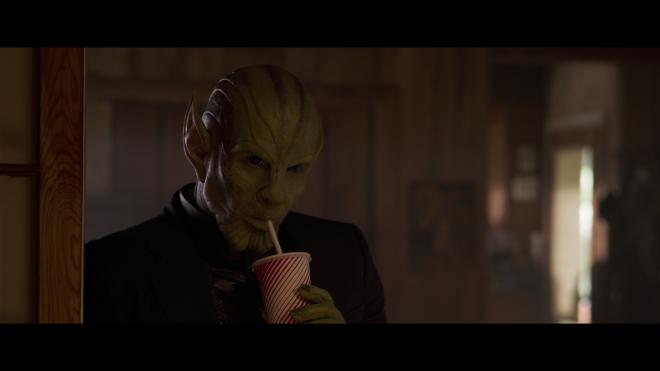 The Avengers' Mightiest Hero finds a home on 4K Ultra HD Blu-ray with a marvelous, near-reference HEVC H.265 encode that surpasses its Blu-ray peer in several areas, making it the preferred way to enjoy this latest entry to the MCU.

Shot on a trio of high-quality digital cameras capable of 6.5K and 8K resolutions, it's unclear if this was a 2K or 4K DI (feel free to link us a source below if you have one). Historically, Disney finishes their movies in 2K and upscales them for Ultra HD Blu-ray and streaming. Regardless, the freshly-minted transfer showcases a welcomed uptick in overall definition compared to the standard Blu, most notably during daylight exteriors. The small details and imperfections of buildings, streets, and various vehicles are distinct, and the elaborate stitchwork of the Kree uniforms are sharply defined. However, some of the CG action tends to be a tad blurrier than its best moments, and some interior shots fall on the softer side of things.

Notwithstanding, the 4K video lands with impressive and balanced contrast, boasting a brighter and more upbeat picture to better complement the story's comedic elements. With crisper, pitch-perfect whites from beginning to end, the sensational action and visuals seem more mesmerizing and eye-catching. The excellent specular highlights afford a tighter bloom and brilliance around the hottest, most intense spots, such as the shimmering glow around Captain Marvel's powers, the plumes of fiery explosions or the picturesque views of the sun's radiant rays. Brightness levels also enjoy an appreciable boost, delivering inkier blacks, for the most part, but a couple of interior shots, again, are slightly but still noticeably restrained. Nevertheless, rich, velvety shadows penetrate deep into the screen, providing the 2.39:1 image with a beautiful cinematic appeal.

The most impressive aspect of the HDR10 presentation, however, has to be the dazzling display of colors in the many action sequences, gaining a notable, often striking jump over its HD SDR counterpart. The most dramatic improvement is in the secondary hues, as particular palette combinations are associated with our heroine and the two warring alien species. While the Skrull clothing comes with shades of dark eggplant, blasts from their weapons are vibrant lilac purple and their skin is deep emerald green. On the other hand, the Kree uniforms and their weapons glow a vivid cyan, but the planet is bathed in buttery yellows and marigold amber tones. Meanwhile, our galactic hero is continuously showered in richly-saturated reds and intense navy blues with animated golden yellow highlights, and the teal-orange look of Planet C-53 (aka, Earth) shows full-bodied primaries while flesh tones appear more true-to-life with lifelike textures, revealing every pore, wrinkle, and minor blemish. (HDR10 Video Rating: 92/100) 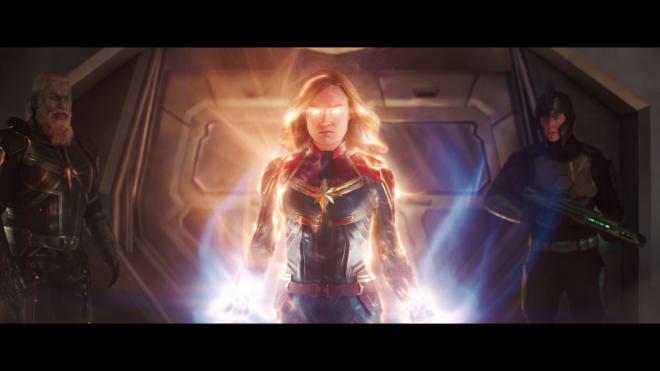 Granted, much of the action remains spread out across the fronts, but at least, the surrounds are put to better use and employed more often for enhancing the wild, chaotic blockbuster visuals. On several occasions, atmospherics discretely travel to various channels for a welcomed sense of envelopment, such as the blasts from alien weapons shooting past either side of the room or some aircraft flawlessly zooming overhead. Outside of such action sequences, a good chunk of the design is on the quiet side and somewhat inconsistent. However, it's strong enough to generate an immersive hemispheric soundfield, convincingly engaging the listener without needing to also raise the volume.

As mentioned in the Blu-ray review, this is a front-heavy presentation layered with plenty of background activity to generate a wide and spacious soundstage, and some of those effects expand into the top heights with excellent room-penetrating clarity, creating an impressive half-dome soundscape. The mid-range also benefits from the upgrade, exhibiting improved definition and extension into the upper frequencies, and Pinar Toprak's score displays better warmth and fidelity while the loudest, most bombastic moments maintain good separation. Unlike its lossless brethren, this object-based mix is more dynamic, effectively enveloping the listening area while the dialogue remains crystal-clear and precise amid the rowdy mayhem. The low-end still could be a tad stronger and more aggressive, but the mid-bass levels are nonetheless adequately responsive with plenty of rumbling weight and oomph to provide the visuals and song selections some depth and presence. (Dolby Atmos Audio Rating: 88/100) 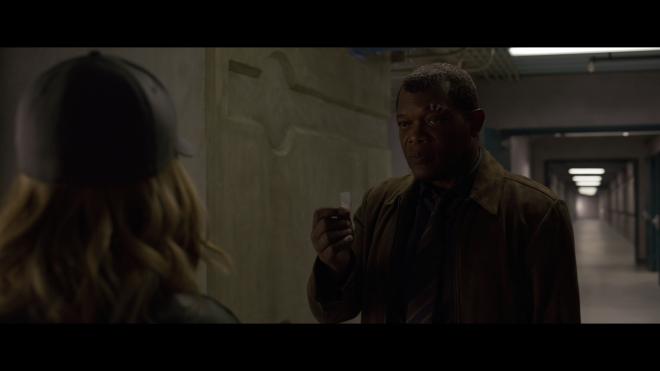 The entire collection of supplements are available on the accompanying Blu-ray and/or via the included Digital Copy. 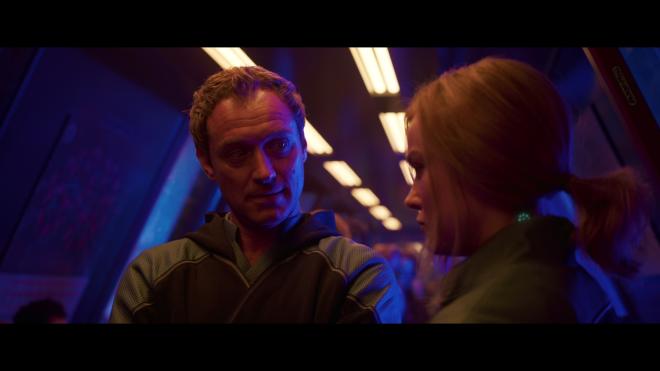 While I may have found a few of Captain Marvel's story and character choices rushed and unemotional, the movie is wildly entertaining, funny, full of spectacle, visually dazzling, and marvelously inspiring. The 4K Ultra HD Blu-ray boasts a gorgeous 4K HDR10 presentation and an awesome Dolby Atmos soundtrack, both of which easily surpass their counterparts on Blu-ray. Supplements are sadly on the disappointing side, but still decently informative. Nevertheless, the overall UHD package is recommended for fans everywhere and the preferred way to enjoy this Marvel prequel.

Sale Price 12.29
List Price 39.99
Buy Now
3rd Party 8.99
In Stock.
See what people are saying about this story or others
See Comments in Forum
Previous Next
Pre-Orders
Tomorrow's latest releases