A rare cinematic sequel, Pixar's Toy Story 4 is a brilliantly insightful film, a worthy successor and richly satisfying conclusion to the franchise. Finding new meaning and purpose on Ultra HD, the film comes with a gorgeous 4K HDR10 presentation, a great Dolby Atmos soundtrack and the same set of supplements. This UHD edition makes for a Highly Recommended addition to the 4K library.

Pixar's Toy Story 4, the fourth, and possibly final, installment in the CG-animated franchise, is the sequel we didn't know we wanted or needed. We never took into account whether Woody (Tom Hanks returning to the iconic role guaranteeing him a permanent place in the halls of American legends) achieved the same satisfying conclusion as the other toys, of considering that perhaps his journey never really came full circle or was fully resolved. In Toy Story 3, the gang was allowed to come to terms with their fate, that toys eventually are either forgotten in storage, donated or simply lost — albeit not without its share of challenges and difficulties. Still, it's interesting to watch this latest entry while thinking back upon its predecessor with hindsight. Woody wasn't really offered the same opportunity as his friends. In fact, he has only ever understood his place and sense of purpose from a narrow, single-minded perspective: that of a toy or an object owned, meant only to bring joy and happy memories for said owners.

As noble and altruistic as that may be on the surface, this staunch belief, that again in retrospect, has surprisingly guided much of Woody's motivations throughout the series. At the heart of each entry's plot is our cowboy hero — the admired American mythological effigy of self-reliance and independence — continuously grappling to maintain his self worth as defined by another, a battle both within himself as much as against uncontrollable external forces. This is what makes his relationship with Forky (Tony Hale) deeply fascinating and poignantly perceptive. As a salvaged spork pieced together by Bonnie, the plastic eating utensil traditionally meant for one-time use is also struggling with its existence, caught between two worlds, both physically as a fork and spoon as well as a toy versus trash. Woody, too, is stuck between Bonnie's closet or being played with. Essentially, Forky is Woody's conscience, the little voice in his head taking physical shape and metaphoric visual of how Woody feels inside. 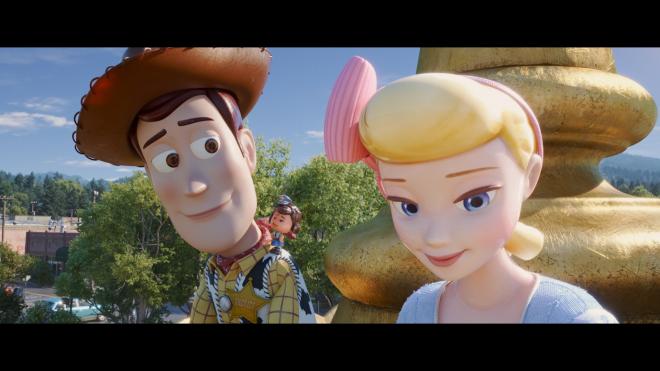 Heck, Woody's existential crisis — his journey for discovering and creating his own sense of purpose and meaning — even takes literal form as a dark, somber road where our hero's dilemma is directly addressed and after a montage sequence showing Forky as a heavy, exhausting burden. And the rootinest, tootinest sheriff is aided on this journey to forge his own path with the help of two other toys, one of which is not-so-coincidentally found living in an antique shop called "Second Chances." Gabby Gabby's (Christina Hendricks) belief of a toy only serving one purpose takes a darkly obsessive turn, to the point of creating a disturbingly creepy vibe straight out of Stanley Kubrick's The Shining. Of course, it doesn't help her goons are ventriloquist dummies. On the other hand, revealing a brighter and less-traveled road is the more animated and charmingly spirited Bo Beep (Annie Potts), who provides Woody and the audience with a new and more freeing understanding of the phrase "lost toy."

Toy Story 4 not only reunites the gang and Bo Beep for one final adventure through the world of toys, but it also delivers an unexpected yet much-deserved conclusion to Woody's journey, a final closing chapter in the life of a toy that battled with feeling lost in an always-changing and indifferent universe. Along the way, he makes new and terrifically memorable friends, like Keanu Reeves's  Duke Caboom, a motorcycle daredevil who ironically needs to be emotionally wound up before performing a dangerous stunt. Keegan-Michael Key and Jordan Peele are an absolute, scene-stealing highlight as Ducky and Bunny, and their twisted plans for stealing the keys to Gabby Gabby's wardrobe is one of the funniest sequences of the film. But as delightfully wonderful additions to the Toy Story family as they are, this particular story undoubtedly belongs to Woody finding his own happily-ever-after, and as an animated treatise on Sartrean existentialism, Toy Story 4 is arguably the best entry of the entire franchise.

Walt Disney Studios Home Entertainment brings Toy Story 4 to 4K Ultra HD Blu-ray as a three-disc combo pack with a flyer for a Disney Digital Copy. When redeeming said code via RedeemDigitalMovie.com or MoviesAnywhere, users have access to the 4K digital version in Dolby Vision HDR with Dolby Atmos audio. The dual-layered UHD66 disc sits comfortably opposite a Region Free, BD50 disc atop another BD25 disc containing all the bonus material. All three are housed inside a black, eco-vortex case with a glossy, lightly-embossed slipcover. At startup, viewers are taken to a static screen where owners can choose between the start of the movie or look through the menu. 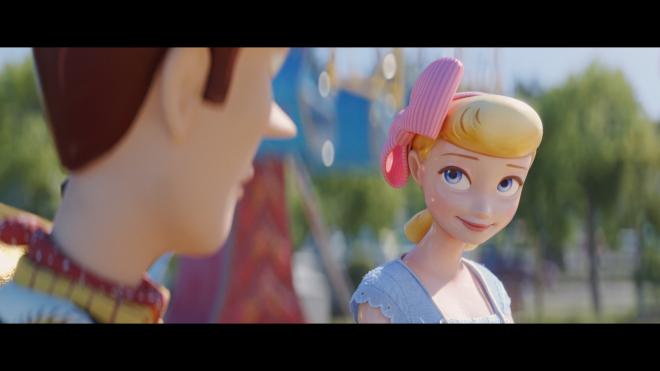 The toys battle an existential crisis on Ultra HD with a remarkable and often stunning-looking HEVC H.265 encode, and like the Blu-ray, the results make this the most beautiful and best-looking installment of the entire franchise on any format. It may not be a significant jump over the 1080p HD version, but the differences make for a noteworthy upgrade nonetheless.

As is customary, the movie was originally rendered in 2K, but a 4K DCP was made for cinema distribution and likely used for this UHD home edition. Whatever the case may be, the transfer overall shows better definition and clarity in the stitching of the toys' clothing, finer and more realistic textural details in the fabric and the tiny fuzzballs and hairs on the shoulders of some toys are a tad more distinct. Every minute feature is striking and highly detailed, and we can also plainly make out the fine lines in the wooden furniture decorating the dusty antique shop while the smallest, trivial blemish and scratch on Gabby Gabby and Forky are unmistakable. There are a couple instances where the sharpest edges waver and shimmer ever so slightly, but thankfully, it's nothing too egregious to distract from the film's enjoyment.

In terms of contrast and brightness, the improvements are a bit more understated and not quite as apparent, which likely has a lot to do with the creative intentions of the filmmakers. Faithful to those aesthetic choices, the 4K video nonetheless looks brighter and move vivid, making daylight exteriors livelier and bursting with energy from the lustrous sunshine. From the plastic of Forky and Duke Caboom to the polyester stuffing of plush toys, whites are notably crisper and cleaner throughout. Specular highlights, on the other hand, are subtler, displaying a slightly more intense and brilliant pop in the harsh but narrower rays beaming into the store. Likewise, the carnival lights have sparkle with a radiant intensity, and the twinkling glass of the chandeliers have a dazzling, realistic flickering snap to them, making them all the more attractive and mesmerizing when Bo Beep points it out.

At the same time, black levels are exceptionally richer and much truer than the BD, bathing the shop in velvetier, ebony shadows that add to the store's creepiness and rather morose vibe. Nighttime sequences and Duke's pinball juke-joint are awash in silky, inky darkness that penetrates deep into the background, providing the 2.39:1 image with a striking three-dimensional quality and a gorgeous cinematic feel. The 2160p picture shows outstanding gradational differences between the various shades while the many poorly-lit sequences maintain superb visibility and detailing in the darkest corners of the frame.

All the while, the HDR10 presentation will keep viewers spellbound and amazed by its gorgeous, hypnotic array of colors. In every scene and no matter the location or situation, the action is continuously permeated in absolutely sumptuous primaries, lavishing the carnival and Duke's nightclub in ecstatically glowing reds, electrifyingly incandescent blues and lively greens. However, most of the animation is a kaleidoscope of secondary hues, from the rich earthy browns and ambers of Woody's outfit and the antique shop to the vibrantly animated purples, pinks and tans showering the carnival and the scene when the sun's ray's glow through the chandeliers. At night, the carnival really comes to life with spirited, dynamic tiger oranges and warm marigold yellows, easily making this one of Pixar's most impressive, demo-worthy and spectacularly dazzling home releases yet. (HDR10 Video Rating: 96/100) 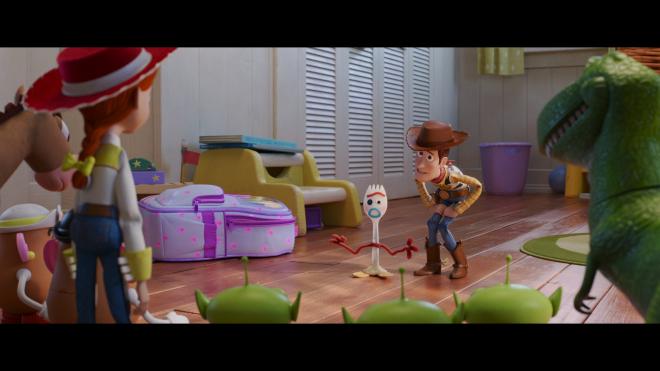 The third sequel debuts to 4K home theaters with an excellent and overall satisfying Dolby Atmos soundtrack that adds a couple welcomed enhancements but on the whole, is not much different or offers a significant upgrade over the DTS-HD MA 7.1 version.

Similar to its lossless counterpart, this is a pretty front-heavy presentation, maintaining much of our attention and focus on the on-screen action. This isn't necessarily a bad thing given that the story is very much a character-driven plot, meaning vocals are prioritized and intelligible with outstanding intonation in the more dramatic moments. All the while, a palpable low-end provides a hearty weight and presence to the action and music, and background activity smoothly travels between the front channels, creating a wide and spacious soundstage. From time to time, those effects faintly but convincingly travel into the top heights, nicely broadening the action for a strong, welcoming half-dome soundscape.

However, the bigger concern worth noting is the lack of rear activity, which was also an issue with the DTS-HD version. Admittedly, the sides and rears are better employed with stronger, more fluid panning on a few occasions, as a couple noises lightly bleed across the overheads with flawless ease. And like before, atmospherics are selectively used for very specific sequences, but such moments, this time around, generate a slightly more gratifyingly soundfield. The best and most satisfying scenes are the beginning flashback with the rain pouring from above, Duke's pinball-machine nightclub and the carnival sequence at the end.

Going back to the front activity, the otherwise wide and broad soundstage comes with a rather lackluster mid-range. Although providing plenty of clarity and admirable definition, in order to better appreciate it, the master volume needs to be raised to -5 from reference. And even then, imaging still comes across arguably flat and uniform while never really extending into the higher frequencies, making the loudest segments ultimately feel restrained. 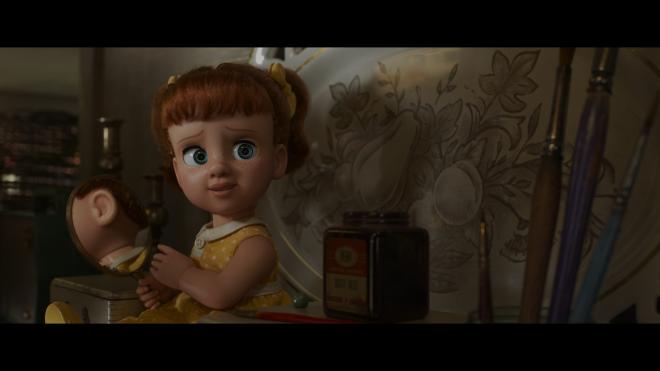 For this Ultra HD edition of Toy Story 4, Disney Studios ports over the same set of bonus material as the day-and-date Blu-ray release and spread across two BD discs. 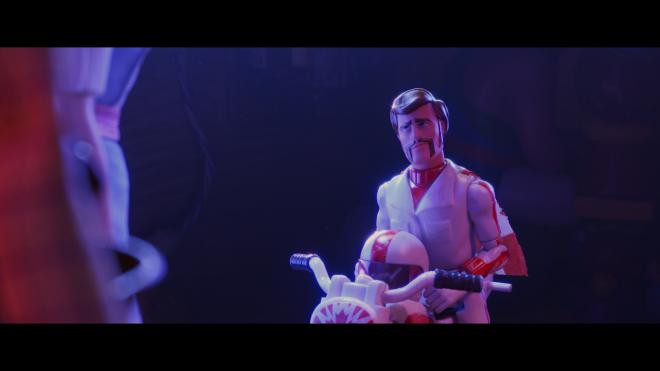 Pixar's Toy Story 4 is not only one of those rare cinematic sequels that's just as good if not better than its predecessors, but it is also a brilliantly insightful and intelligent conclusion to the entire franchise. With a host of new, memorably hilarious characters, this fourth installment is worthy successor sure to satisfy loyal fans. The film finds a new purpose on Ultra HD with a gorgeous 4K HDR10 presentation and great Dolby Atmos soundtrack, providing owners with welcomed step-up over its Blu-ray counterpart. Porting over the same set of supplements, the UHD edition makes for highly recommended to the 4K library.

Sale Price 9.45
List Price 39.99
Buy Now
3rd Party 2.99
In Stock.
See what people are saying about this story or others
See Comments in Forum
Previous Next
Pre-Orders
Tomorrow's latest releases