Nearly twenty-five years ago, Pixar's Toy Story changed the world of animation forever, being the first computer-animated feature-length film and becoming a box-office success. To this day, the original script, which was also co-penned by Joss Whedon and Andrew Stanton, remains just as entertaining while offering audiences a few thought-provoking, existential questions. Of course, these deeper queries are really more for engaging the parents while dazzling the kids with a simple fantasy tale about toys coming to life and some state-of-the-art visuals. When Woody (Tom Hanks) feels threatened by his potential replacement, Buzz Lightyear (Tim Allen), the cowboy toy struggles with his own sense of purpose in a world that might think him obsolete. More ingenious still is a plot that serves as a commentary on the evolution of film technology and the popularity of one genre (the western) giving way to the rise of another (science-fiction), which is, ultimately, at the heart of Woody's resentment towards Buzz. 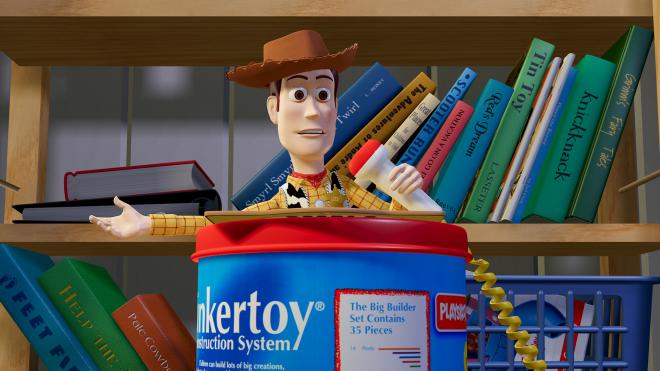 Walt Disney Studios Home Entertainment brings Pixar's Toy Story to Ultra HD Blu-ray as a two-disc combo pack with a flyer for a Disney Digital Copy. When redeeming said code via RedeemDigitalMovie.com or MoviesAnywhere, users should have access to the 4K digital version in Dolby Vision HDR with Dolby Atmos. The dual-layered UHD66 disc sits comfortably opposite a Region Free, BD50 disc, which is identical to the 2010 release. Both are housed inside a black, eco-vortex case with a glossy slipcover. At startup, viewers are taken to a static screen where owners can choose between the start of the movie or look through the menu. 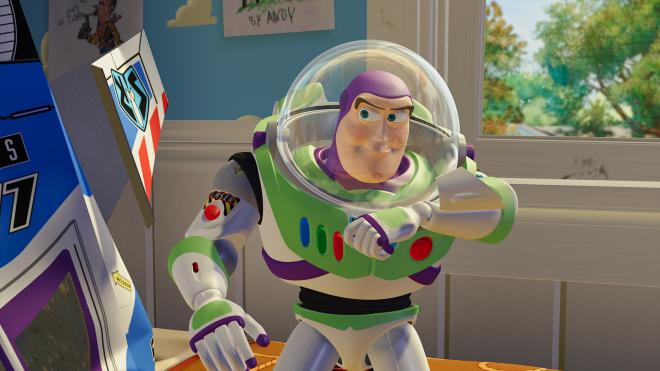 The toys come to life with an excellent HEVC H.265 encode that often astounds and amazes, giving fans a notable upgrade over the previous Blu-ray. However, on the resolution side, the 2160p picture remains comparably the same.

The animated fantasy comedy was originally rendered at 1536x922 resolution (an aspect ratio of 1.66:1), and those original files were later re-rendered and mastered into a 2K digital intermediate for the 2010 Blu-ray. So, it's safe to assume Disney recycled that same source for this Ultra HD edition, displaying slightly sharper details inside the house, the wood grain in the furniture, the stitching of clothing fabric and a tad better texture on the plastic bodies, such as Mr. Potato Head and Rex. On the other hand, the CG animation hasn't aged well considering how far technology has come over the years while revealing a few instances of very mild banding and aliasing in some areas.

Regardless of those small issues, the upscaled transfer still has a great deal to offer, namely the massive improvement in overall contrast, making the 4K video really pop with rejuvenated energy. Whites are resplendently brighter and crisper, giving the action in daylight exteriors a spirited verve while the fluorescent lights of the Dinoco gas station are beaming. The more dramatic enhancement though is the sparkling, vibrant specular highlights, supplying the hottest spots with a tighter, narrower glow while revealing finer details, such as in each puff of the clouds, the way sunshine sparkles off various surfaces and the realistic shine of metallic objects. Likewise, brightness levels enjoy a considerable boost, bathing the screen silky rich blacks and deep, velvety shadows that never obscure the sharper aspects within the darkest corners while providing the 1.78:1 image with a gorgeous cinematic appeal. 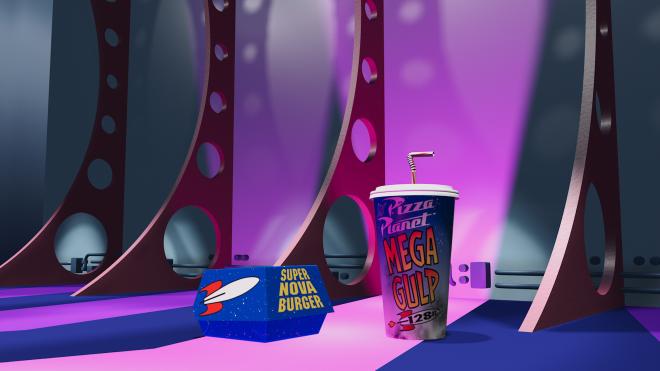 Better still, making this HDR10 presentation a hands-down winner is the strikingly vivid colors throughout, making this UHD a genuine feast for the eyes and its HD SDR counterpart surprisingly paler by comparison. The classic Pixar feature comes to life with a significantly wider and more spirited array of secondary hues, boasting richly-saturated golden yellows, marigold oranges and tawny, caramel browns in every scene. But the best and arguably most dramatic sequence takes place at Pizza Planet, showering the screen with dynamic cotton-candy pinks and fuschia neons that impressively fade into animated lilacs and deep violets against silver grey walls and electrifying indigo blues. At the same time, primaries are more sumptuous and mesmerizing, especially the lively greens of the foliage, the cerulean blues of the wallpaper and the candy rose reds of the furniture and various articles of clothing. (HDR10 Video Rating: 82/100) 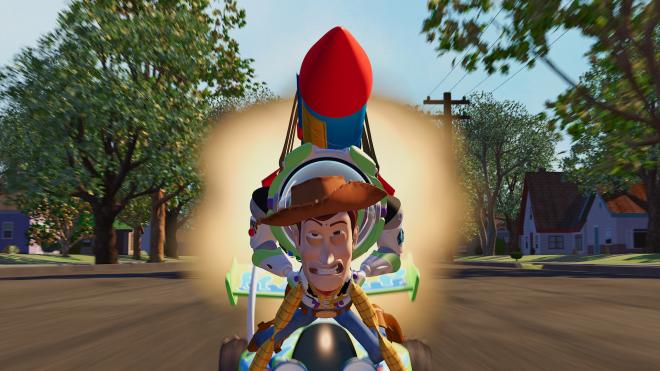 The toys make quite a ruckus when no one is looking, thanks to a splendidly good and overall satisfying Dolby Atmos soundtrack.

Likely taken from the same source as the above video, several sound effects have noticeably been repurposed for generating a wider soundscape, which for the most part, is excellent. The chatter of excited children during Andy's birthday party and at Pizza Planet is distinctly heard in the surrounds, sure to keep audiences engaged because it creates an immersive soundfield. A few times, some atmospherics pan overhead fluidly and convincingly, such as when Buzz falls with style early on, while at other times, it draws too much attention to itself and can distract a bit, such as when Buzz and Woody argue underneath the 18-wheeler. But overall, the surrounds and heights are employed well.

The design's greatest strength, however, comes from a broad and expansive soundstage, which is continuously kept busy with lots of background activity. Most of that ambient noise smoothly travels between all three channels while lightly bleeding into the top heights, creating a welcoming half-dome environ. Admittedly, the mid-range is not particularly dynamic or memorable, lacking some warmth or sharp distinction in the upper frequencies, but the loudest moments are nonetheless clean and detailed while the original score exhibits strong instrumentation. Vocals are precise and intelligible amid the most exciting bits of action. The low-end has noticeably been boosted but in a good way, providing plenty of appreciable weight and oomph to Sid's fireworks explosions, making this a great listen for fans. (Dolby Atmos Audio Rating: 84/100) 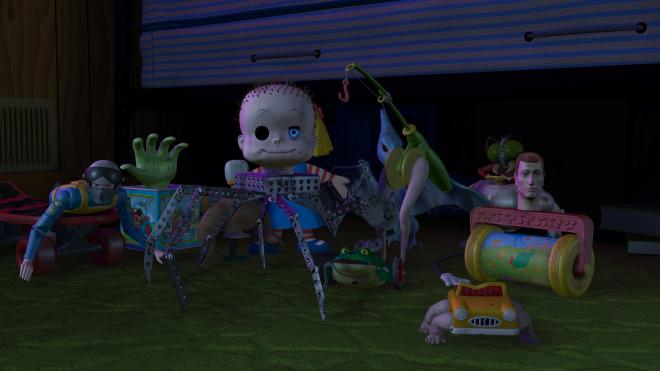 The same set of supplements are ported over and only available on the accompanying Blu-ray. 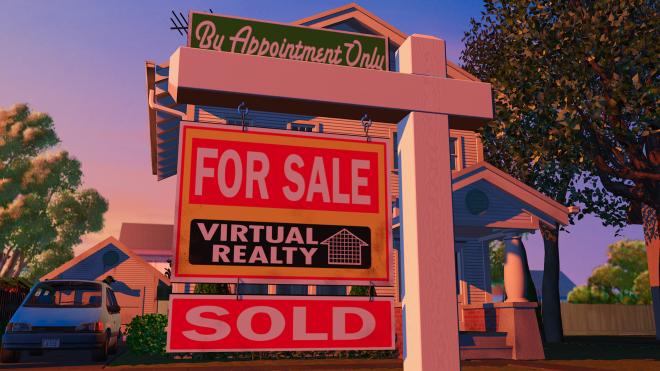 Toy Story changed the world of animation forever and explored some existential questions about life while dazzling the imagination of children everywhere. The classic CG-animated film bursts out the Disney toy chest with a gorgeous 4K HDR10 presentation and an excellent Dolby Atmos soundtrack. Porting over the same set of supplements as the previous release, this Ultra HD edition is nonetheless recommended.

Sale Price 17.99
List Price 39.99
Buy Now
3rd Party 9.78
In Stock.
See what people are saying about this story or others
See Comments in Forum
Previous Next
Pre-Orders
Tomorrow's latest releases