Stanley Kubrick's horrifying adaptation of Stephen King's terrifying novel returns to home video after a full 4K restoration with Dolby Vision, HDR10+, and HDR10 grading included. Although the bonus features and 5.1 audio are identical the original 2007 Blu-ray release (has it really been 12 years?), The Shining has never looked better, boasting improved colors, contrast, and overall sharpness. In short, it's a stunning catalog release. Must Own.

The Shining is one of the most famous movies of the 20th Century, spurning critical essays, conspiracy theories, and even a creative clash between a perfectionist filmmaker and best-selling author. It's a movie that introduced the world to the gliding-camera feeling of Steadicam cinematography, and one that still terrifies almost 40 years after its debut. It's so iconic, in fact, that despite Stephen King's creative objections to the changes made during its adaptation, the filmmakers behind the upcoming Doctor Sleep sequel have repurposed the imagery from this movie rather than going back to King's original novel. (It was also heavily featured in Steven Spielberg's Ready Player One, not to mention a few decades worth of parodies.)

In that sense, even though I'm a huge Stephen King fan -- his latest novel The Institute is a nail-biting gut-punch of a yarn -- and while I adore The Shining novel too, my heart lies with Stanley Kubrick's incarnation. It's one of the first horror movies I can remember, a movie I grew up watching in bits and pieces on TV when my parents thought I was sleeping. Hiding behind the couch and under the covers. In those days, and through the DVD era, it was in the open matte 4:3 aspect ratio before Blu-ray, and now 4K, returned the crop to something closer to Kubrick's original intention.

Revisiting the film in its restored form, it's like coming home again to late-night nightmares of my childhood. I hear the movie is also getting a limited theatrical release as well. No matter how, find a way to see this new 4K restoration, especially if you're planning to see Doctor Sleep.

For a more in-depth take on the movie itself, check out Peter Bracke's 2007 Blu-ray review HERE. 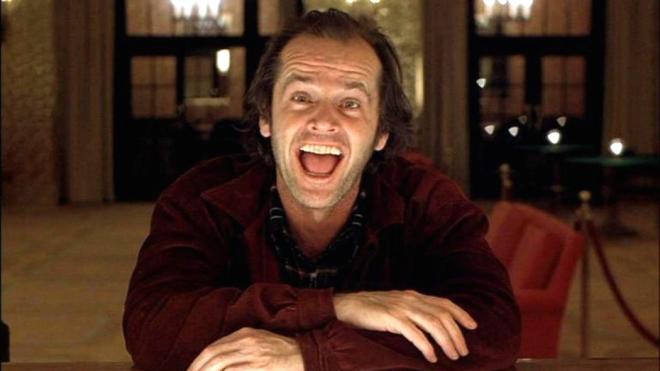 The Shining was always here on home video as part of a two-disc 4K Ultra HD + Blu-ray + Digital combo pack. Both discs are housed in a standard black eco case. Digital Copy redemption works through Movies Anywhere and is valid until 12/31/2021. While we're unable to redeem our code at this time, historically, Warner discs include 4K streaming rights when unlocked. There are no pre-menu trailers, but FYI the Warner Bros. Home Entertainment logo plays in Dolby Atmos even though no other content features Atmos.

When High-Def Digest originally reviewed The Shining at the dawn of the Blu-ray format, we rated that HD transfer at 4.5 stars, which goes to show you how far home video has come in the last 12 years.

If you own that 2007 Blu-ray, throw it away immediately because it lost its shine.

Restored from the original 35mm negative and presented in Dolby Vision, HDR10, and HDR10+, The Shining on 4K Ultra HD Blu-ray takes a glorious leap forward in every technical respect. For this review, I spent most of my time with the new Epson 5050UB projector, which boasts HDR10 compatibility and full P3 color space reproduction, and a 100" screen (review coming soon!). I also sampled scenes with a 65" Dolby Vision-enabled VIZIO 4K TV.

Most obviously, the whole movie is sharper thanks to the added resolution. Film grain is clear and natural, revealing fine details on the yellow Volkswagon driving through the mountains, costume fabrics, Jack Nicholson's thinning hair, the gory makeup effects, and, of course, in the rivers of cascading blood dumping out of the elevator.

By comparison, the original Blu-ray is a fuzzy, murky mess.

In addition to the added sharpness, HDR adds more vibrant colors to the mix. To be fair, the movie's palette primarily consists of neutral metal and earth tones, and lots of whites and off whites. But most scenes also feature a pop of crimson. Sometimes it's just a small toy or a sweater. Sometimes it's an entire bathroom or the aforementioned elevator of blood. Either way, these red tones are vivid and sumptuous. The green maze, gold ballroom, blue skies, and Ullman's pink office also have a bit more pop compared to the SDR incarnations.

In terms of contrast and dynamic range, The Shining doesn't offer the specular highlights we see in more modern HDR, nor does it differ too much from the new standard dynamic range transfer (more about this in a moment). There are also some lower-lit scenes where black levels aren't quite perfect. Still, compared to the first Blu-ray, the new 4K HDR transfer boasts much crisper contrast and black levels without crushing the darker sequences.

In terms of flaws, I found a few instances of dirt specs (maybe around 10 total?) sprinkled throughout, but, again, compared to the 2007 Blu, it's much cleaner with fewer encoding issues. Other issues -- lower contrast moments and/or softness -- are minor and appear inherent to the film stock and lenses used during production. None of the issues are a big deal; they just exist because filmmaking is an imperfect process, especially when one compares older film stocks/lenses to modern digital sensors/lenses.

Which brings me to our final technical grading. I was torn between a 4.5 and 5-star rating, but selected 4.5 because there are other 4K releases out there with a little more objective wow factor. Regardless, this is a glorious catalog title release that breathes new life into one of cinema's greatest movies.

Also worth noting, the included Blu-ray also features the new 4K restoration as its source and much of what we've written applies to that transfer as well. It's noticeably sharper than the 2007 transfer, with less dirt, more color, and improved contrast. If you don't own a 4K TV and you love this movie, you might want to pick up this set just for the Blu-ray.

Still, the 4K Ultra HD Blu-ray is sharper and more colorful than the new Blu-ray and is currently the best way to enjoy this film at home. If you have a big 4K TV or a 4K projector, add The Shining to your collection ASAP.

Outside of the transition from 5.1 PCM to 5.1 DTS-HD MA, this appears to be the same audio mix as the 2007 Blu-ray. There's no Dolby Atmos or DTS:X option, nor will you find the original Mono mix.

In preparing to write this review, I went back to Peter Bracke's 2007 coverage of the original Blu-ray and was surprised to see he graded this soundtrack at 2.5 stars. In reading his words and listening to this track on the ultra-transparent Klipsch RF-7 III floorstanders, however, I've come to agree with his analysis. To quote Peter, ''Dynamics range from decent to anemic. Bass never extends deep enough, while high-end feels compressed and flat. Although there are no source issues or obvious harshness, the mix never feels particularly realistic or expansive."

In short, the track's original elements sounded dated, lacking fidelity and dynamic range. There's also no chest-thumping LFE presence. And, as we'd expect, there's no articulation in any of the sound placement or movement. On the plus side, dialog remains clean and clear and, of course, this track recreates mostly what Mr. Kubrick and his team crafted in 1980. Obviously, the theatrical mix wasn't 5.1, but even now, the track is very front heavy. All of the dialog and sound effects emanate from the center or front channels; it's only the musical elements that swing a little wider. Even with DTS:Neural:X up-mixing engaged, the experience felt like I was sitting in an older mono or stereo cinema with just really tall speakers.

In a technical sense, it's a pretty middle-of-the-road sound mix despite all of the love I have for Wendy Carlos' iconic score and the movie in general. Still, it gets the job done and sounds the way The Shining has always sounded to my ears. And, thanks to those RF-7 III towers, I heard a lots of little details in the music (voices and instruments) that I've never heard again, which goes to show you that, even when a mix isn't as dynamic or articulate as a particular format would allow, you can still marvel at the artistry and craftsmanship involved. As such, I'm going to bump this up from 2.5 stars to 3.0 stars.

Nothing new to report here. The included bonus materials are nearly identical to the 2007 Blu-ray, save for Warners dropping the 4:3 full-screen DVD-quality trailer from the mix. Here's what you'll find and where:

One of my all-time favorite movies, The Shining answers the question, what would happen if a cinematic genius adapted a blockbuster horror novel about a hotel with a haunted past? The results are moody and creepy and unforgettable, as Kubrick and his collaborators set an instant mood and then ratchet the tension up and up and up until the film's riveting climax and spine-chilling final image.

As a 4K Ultra HD Blu-ray, the 5.1 audio and special features may come directly from the previous Blu-ray, but both the 4K HDR and HD SDR video transfers are based on a new 4K restoration that absolutely murders all previous releases. If you're a fan of Stanley Kubrick's The Shining and own a large display, this 4K Ultra HD Blu-ray is Must Own. Even if you don't own a 4K TV, pick this one up for the new Blu-ray transfer.