Toy Story 3 follows the gang to a daycare center controlled by an authoritarian dictator while also searching for a new home as Andy goes off to college. The toys create new memories on 4K Ultra HD Blu-ray with lovely HDR10 video and an outstanding Dolby Atmos mix, but port over the same collection of bonuses. Nevertheless, this UHD edition is Recommended for the whole family.

In Toy Story 3, Pixar expands on the ideas of how the inevitable march of time affects our beloved toys on a deeply emotional level, making this third installment of the franchise that rare sequel that is better than its predecessor and personally, ranks as the best in the series. Taking place ten years after the events of the second entry, which is also the length of time between the two movies, a college-bound Andy must decide which toys will go to college and which will be stored in the attic. A case of a mistaken garbage bag, unfortunately, results in the gang being donated to the Sunnyside Daycare where a big, plush teddy bear, named Lotso (Ned Beatty), rules like an authoritarian dictator. From a story by John Lasseter and Andrew Stanton, director Lee Unkrich carefully treads this political allegory with a great deal of humor while inspired by classic heist and prison films. However, at heart, this is a poignant tale of cherishing childhood memories into adulthood while looking forward to making new ones. 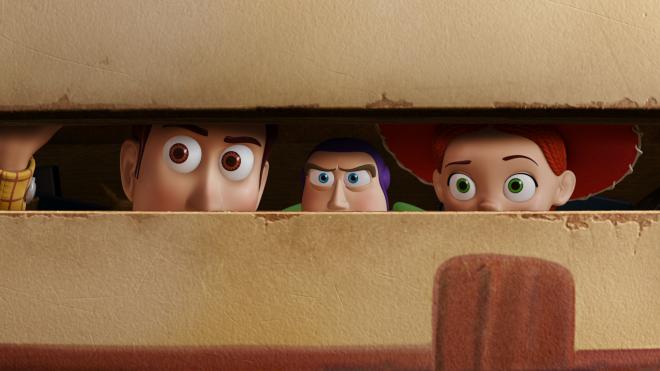 Walt Disney Studios Home Entertainment brings Pixar's Toy Story 3 to Ultra HD Blu-ray as a two-disc combo pack with a flyer for a Disney Digital Copy. When redeeming said code via RedeemDigitalMovie.com or MoviesAnywhere, users should have access to the 4K digital version in Dolby Vision HDR with Dolby Atmos. The dual-layered UHD66 disc sits comfortably opposite a Region Free, BD50 disc, which is identical to the 2010 release. Both are housed inside a black, eco-vortex case with a glossy slipcover. At startup, viewers are taken to a static screen where owners can choose between the start of the movie or look through the menu. 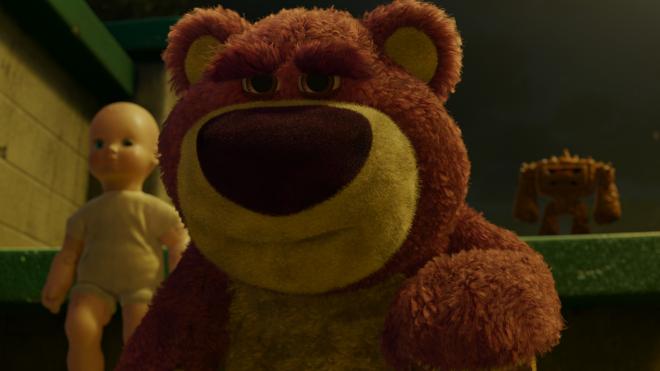 The toys plan a jailbreak on 4K Ultra HD Blu-ray, equipped with a generally appealing HEVC H.265 encode that, on the whole, outshines its Blu-ray brethren in some areas but still looks comparatively similar with a few notable drawbacks. The CG-animated film was likely rendered at around or less than 1080p resolution, and those elements were later mastered to a 2K digital intermediate, which is the same source used for this UHD edition.

With that in mind, the upscaled transfer doesn't show a significant jump in overall definition, but the small uptick is nonetheless welcomed, aided by the noticeable boost in contrast levels. The good about this boost is a drastically brighter 2160p picture with cleaner, crisper whites and strong specular highlights throughout, allowing for better visibility of the background details in the far distance. The individual hairs on Lotso are a tad sharper, Ken's wardrobe sparkles with flamboyant intensity and the minor imperfections and flaws on some toys are slightly more detailed. The bad is a contrast that also feels hotter than it should be or pushed beyond what the source is capable of, making a few scenes appear moderately washed out and pale. At the same time, there is a bit of banding in some areas and evidence of negligible aliasing.

Although a decent portion of the action packs a notable punch, such as the opening train robbery, much of the 4K video also tends to look a bit faded due to the enhanced contrast, such as daylight sequences at Sunnyside. The overall palette doesn't really show as much of an improvement as its two predecessors, with much of it looking surprisingly comparable to its HD SDR counterpart. That's not to say colors don't appear fuller and moderately more dynamic because they definitely benefit from the wider gamut, such as the amber-brownish lighting of Sunnyside. But honestly, the upgrade isn't as dramatic of a change as we've come to expect from the format or would assume from a Pixar production. The same goes for brightness levels, as the HDR10 presentation displays comparable blacks, providing the 1.78:1 image with shadow detailing is that's relatively similar to the HD version. (4K HDR10 Video Rating: 72/100) 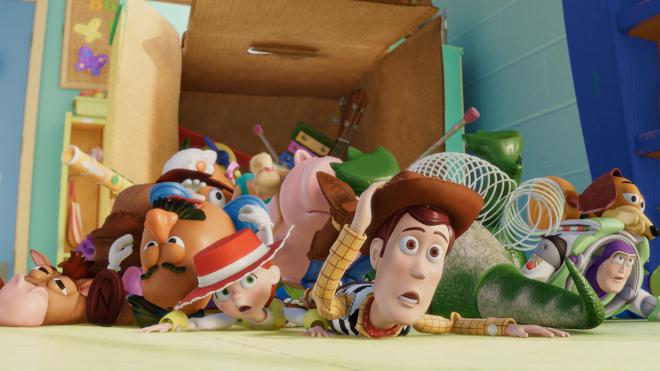 The beloved toys bring fans to tears but create new memories thanks to an outstanding and highly satisfying Dolby Atmos soundtrack that surpasses its DTS-HD predecessor.

The design breaks into home theaters with excellent directionality, as various atmospherics move from speaker to speaker with flawless panning. The room fills with the manic hustle and bustle chaos of the Caterpillar Room or the thrilling, white-knuckle mayhem of the landfill while other, quieter moments are layered with the subtle effects of local wildlife. On a few occasions, some of those sounds spread into the ceiling channels, especially when the action erupts on screen. The best moments take place when toddlers mistreat the toys or on the landfill conveyor belt as various noises and screams discretely move and echo overhead, generating an amusingly effective hemispheric soundfield.

Of course, as is often the case with animated films, a majority of the action takes place in the front soundstage, lightly bleeding into the top heights with convincing off-screen effectiveness. Imaging is broad and spacious with an extensive and superbly detailed mid-range, creating an awesomely engaging half-dome wall of sound. At the same time, vocals are pristine and well-prioritized, intelligible even during the loudest, most action-packed moments. Although the bass is not quite as earth-shattering and pounding as its lossless counterpart, which was a similar issue with the UHD edition of Toy Story 2, the low-end is nonetheless palpable and adequate, providing the action and music with appreciable weight and presence. (Dolby Atmos Audio Rating: 88/100) 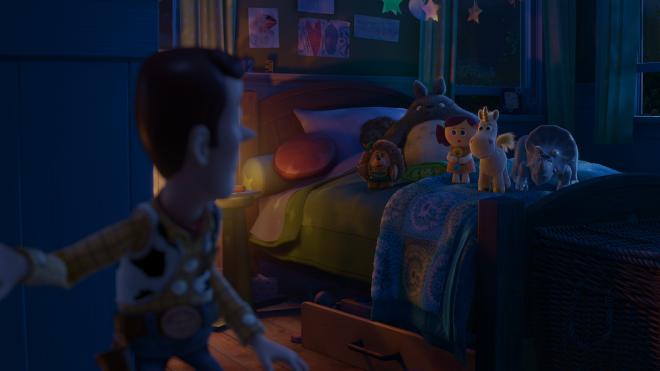 All the same bonus features are ported over and spread between two Blu-ray discs. 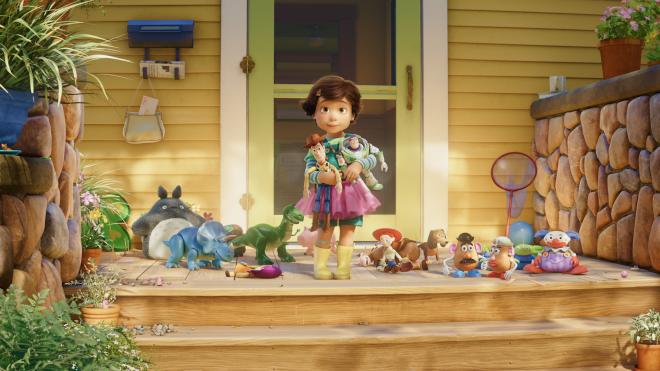 Personally, Toy Story 3 is the best entry of the franchise with a story that follows our beloved toys overthrowing an authoritarian dictator of a children's daycare center while at the same time, the gang struggles with searching for a new home in a constantly changing world. The toys break into Ultra HD with a lovely 4K HDR10 presentation and an outstanding Dolby Atmos soundtrack, making this a welcomed improvement over its Blu-ray counterpart. Porting over the same collection of bonuses, this UHD edition is a Recommended addition to the library.

Sale Price 14.49
List Price 39.99
Buy Now
3rd Party 7.68
In Stock.
See what people are saying about this story or others
See Comments in Forum
Previous Next
Pre-Orders
Tomorrow's latest releases