Wrapped in stunning visuals, white-knuckle action and cringe-inducing fight choreography, Chad Stahelski's John Wick: Chapter 3 - Parabellum delivers another thrilling entry in the series that engagingly expands on the titular antihero's mythology. The descent into the inferno crashes on 4K Ultra HD with a gorgeous Dolby Vision HDR presentation, a demo-worthy Dolby Atmos soundtrack and a small set of bonuses. The overall package is Highly Recommended.

Picking up a few minutes where Chapter 2 left off, John Wick: Chapter 3 - Parabellum sees our titular antihero hitman running through the streets of New York City desperately searching for a way out, both literally from the $14 million bounty on his head and figuratively from the chaos he created. The seemingly undemanding and straightforward plot of a ronin warrior without direction or purpose except to remain alive is, in fact, permeated in a complicated theme about confronting the consequences of one's decisions. The choices we make in our lives come with repercussions, be they positive or negative, that could potentially affect others around us. In the case of the legendary retired assassin John Wick (Keanu Reeves), the killing of Santino D'Antonio brought the unwanted attention of an Adjudicator (Asia Kate Dillon), putting the manager of the New York Continental Hotel (Ian McShane) and the Bowery King (Laurence Fishburne) at risk of losing their positions within the criminal underworld.

This being the central theme of Chapter 3 is brought up later with more blatant emphasis when Wick reunites with a former associate now turned manager of the Casablanca Continental Hotel, Sofia (a wonderful Halle Berry). However, the importance of their exchange extends beyond that as the frenemies discuss Sofia's marker — a debt owed to Wick — and briefly touch on a past event, further expanding on this one-time lethal and cold-hearted killing machine whose name alone demands respect and strikes fear in others. Their conversation works effectively well in conjunction with a previous back and forth with the Director (Angelica Huston) of a Russian ballet theater and whose name obviously carries a double meaning. As with its two predecessors, this sequel broadens the mythology of John Wick, his genesis and gives some backstory to a legend that even killers like Zero (Mark Dacascos) can't help but act the fanboy, and it does so creatively through a short tour of the aforementioned theater. 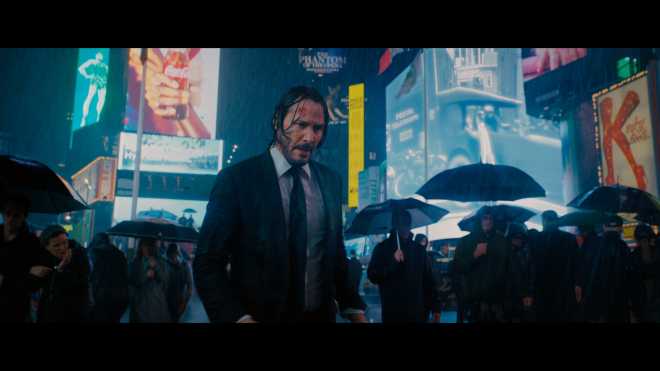 In this third installment of the phenomenally excellent franchise, audiences are not only traveling with Wick in search of forgiveness from the Elder, but we also join in his trek for redemption, of salvation from the ghosts of his past haunting his desire to mourn his wife. The real beauty and brilliance of the script is the cunningly subtle incorporation of various allusions that necessitate multiple viewings — a masterly crafted display of intertextuality. In the library, Wick opens Alexander Afanasyev's book to the Russian folktale of Vasilisa the Beautiful, a clear reference to his epithet: the Baba Yaga. Better still is a killer interrupting our hero by reading Canto XXVI from Dante's Inferno, which immediately suggests a comparative reading of both the film and the classic literary epic. This is further solidified when Huston's Director makes a vague, passing remark about the road to paradise — think salvation — is through hell before branding Wick with an upside-down cross and sending him off to Morocco.

Essentially, Chapter 3 sets the stage for future installments, but this journey follows Wick into the hellish depths of the underworld, much like in Dante's grisly feverish nightmare. The city of Casablanca is so deeply etched in our cinematic conscious as well that we can't help but think of the 1942 Bogart-Bergman classic where souls are caught in between the hell of Nazi Germany and the American paradise, turning that part of Wick's trek into Purgatory. Similarly, director Chad Stahelski wants his audience always thinking of other texts, like Reeves quoting directly from The Matrix to McShane or the Adjudicator staying in room 217 from Stephen King's novel The Shining. More importantly is the understated nod to Sergio Leone's The Good, the Bad and the Ugly when Wick puts together a six-shooter, which simultaneously makes known this film is a modern-day samurai western in the spirit of Akira Kurosawa. Then, there's the homage to Buster Keaton as a shrewd commentary on our knee-jerk reaction to laugh at cringe-inducing bodily violence and old-school stunt choreography.

When it's all said and done, however, the John Wick series is a true rarity in cinema history. No other movie franchise has managed to consistently be this good with each installment, as in every entry to the series is just as entertaining, engaging and skillfully made as to the one which preceded it. Even rarer and more impressive is each sequel surprisingly becoming bigger box-office hits than its predecessor, and I personally can't wait for Chapter 4.

Lionsgate Home Entertainment brings John Wick: Chapter 2 - Parabellum to 4K Ultra HD Blu-ray as a two-disc combo pack. The package includes a flyer for a downloadable game from Epic Games and a Digital HD Copy code, which can be redeemed via the studio's new scanning app and LionsgateVIP.com, ideally unlocking the 4K Dolby Vision version with Dolby Atmos audio. Inside a black, eco-cutout case with a glossy slipcover, a triple-layered UHD100 disc sits comfortably opposite a Region A locked, BD50 disc. At startup, the disc goes straight to an animated menu with full-motion clips, the usual options and music playing.

The third chapter of John Wick's descent into the inferno shoots its way through the Ultra HD underworld with a luxuriously beautiful HEVC H.265 encode that surpasses its day-and-date Blu-ray brethren.

Outfitted in Dolby Vision HDR, our ronin warrior runs through the streets boasting dramatically improved brightness levels, which is arguably the best part of this UHD edition. Much of the action is continuously soaked in opulent, stygian blacks with pleasing gradational differences between the various shades, bathing nighttime sequences in richer, silkier shadows that penetrate deep into the screen with strong visibility of background information. However, the poorly-lit interiors come with some very mild crush in the darkest spots, but this may be intentional. Regardless, the 2.40:1 image remains excellent with a gorgeous cinematic appeal and appreciable depth.

The 2160p picture also comes equipped with a welcomed boost in contrast, which at first, may not appear as big of a jump. This is likely due to cinematographer Dan Laustsen's aesthetic approach to create a dark, somber atmosphere and mood. Nevertheless, the action is a tad brighter and displays snappier, pitch-perfect whites, most notably in daylight exteriors and the various light fixtures when indoors. The more appreciable upgrade is the noteworthy specular highlights, looking much crisper and radiant with a strikingly tighter, narrower glow, allowing for significantly better detailing within the hottest spots, which was a slight problem in the 1080p HD version. The best comparative example of this is the conversation with Berrada where we can practically make out each individual LED bulb in the rope lights.

Continuing in pure awesomeness, the Dolby Vision presentation also boasts a near-cartoonish array of vibrant, spirited colors, showering the graphic violence and hand-to-hand brutality with an amazing variation of full-bodied secondary hues. The streets of New York City are awash in hot fuschia pinks, deep lilac purples and flamboyant cyans while the Morocco sequences are layered in earthy browns, mocha and radiant sunny ambers. The orange-and-teal palette is also teeming in a wide gamut of golden yellows, vivid canary shades, fiery marigold oranges and animated reds that range from a deep crimson in the blood to neon rose in the lights. The on-screen carnage is continuously awash in sumptuous primaries, especially the richly-saturated blues lavishing the nights and dark interiors in lively teals, tense cobalt tones and strong indigo shadows. The best demo-worthy sequence is when the ninjas raid the Ruska Roma ballet house.

Although sourced from a 2K digital intermediate, the upscaled 4K transfer appears fairly similar in terms of overall definition and clarity, but it nonetheless enjoys a welcomed uptick throughout. There are a few soft, mildly blurry spots sprinkled here and there, mostly related to the cinematography and the high-speed action mixed with CGI, and there are a couple instances of the sharpest edges shimmering and wobbling. Nevertheless, the architectural features of the Continental, the minute imperfections of the Casablanca buildings and the griminess of the Bowery King's lair are a bit sharper than its HD SDR counterpart. We can also plainly make out every detail in the coins, clothes and the intricate design of the Elder's tapestry haven. Facial complexions appear healthier with a more natural peachy-reddish hue in the entire cast while revealing wrinkles, pores and negligible blemishes with lifelike textures. (Dolby Vision Video Rating: 88/100)

Chapter 3 splendidly serves and is of outstanding service to home theaters thanks to an exceptional, demo-quality Dolby Atmos soundtrack, making this the best track in the series.

Right from the start, the design makes excellent use of the entire soundscape with action sequences being the most memorable, as would be expected. Whether we're outside in the city streets, making a harrowing escape from the kasbah or caught in the crossfire of a wild shootout inside the Continental, the surrounds and ceiling speakers are frequently put to work, immersing viewers with a sensational hemispheric soundfield, making those aforementioned moments great go-to demo material. Rain pours down from overhead, drops of water drip from the above, bullets smoothly pan in every direction and the echo of motorcycle engines reverberate all around the listening area. Although very light, several subtle atmospherics keep quieter scenes enveloping.

At the same time, the front soundstage is continuously busy and highly-engaging, allowing the score of Tyler Bates and Joel J. Richard plenty of room to breathe and generate an awesome half-dome wall of sound. Bleeding wide and evenly across the three front channels and top heights with excellent warmth and clean fidelity, the music makes the action feel spacious, exhibiting outstanding clarity and sharp details between the various frequencies. Background activity is a near-constant, delivering a wealth of sounds and several understated noises that convincingly occupy the entire screen while vocals are always precise and well-prioritized. Meanwhile, the low-end supplies a powerfully robust and palpable oomph to the music, gunfire and to every cringe-inducing damage to the body with excellent depth and weight (bass chart), making this a fantastic object-based mix that'll have fans feeling every moment. (Dolby Atmos Audio Rating: 96/100)

The same set of supplements are shared between the Ultra HD and the accompanying Blu-ray.

Chad Stahelski's John Wick: Chapter 3 - Parabellum is a true gem and rarity in cinema by delivering the same level of quality and action-packed excitement as its predecessors. Expanding on the mythology of the former assassin and the criminal underworld from which he keeps trying to escape, the third entry is also a brilliantly crafted tale on redemption wrapped in stunning visuals, white-knuckle action thrills and cringe-inducing fight choreography. Our favorite antihero's descent into the inferno crashes on 4K Ultra HD with a strikingly beautiful Dolby Vision HDR presentation that surpasses its Blu-ray counterpart, accompanied by the same reference-quality Dolby Atmos soundtrack. With a passable collection of supplements to boot, the overall UHD package is highly recommended.

Sale Price 10.78
List Price 22.99
Buy Now
3rd Party 6.57
In Stock.
See what people are saying about this story or others
See Comments in Forum
Previous Next
Pre-Orders
Tomorrow's latest releases