In this next chapter following the 2014 hit, legendary hitman John Wick (Keanu Reeves) is forced back out of retirement by a former associate plotting to seize control of a shadowy international assassins' guild. Bound by a blood oath to help him, John travels to Rome where he squares off against some of the world's deadliest killers.

Staying true to the title's connotation, John Wick: Chapter 2 picks up soon after the events of the first movie. These are the repercussions of the preceding mayhem. Our titular antihero John Wick (Keanu Reeves) even appears on screen, coming out the shadows like a ghostly nightmare, with a far more focused determination as he once again leaves a trail of chaos and death. This time, he is in pursuit of his cherished '69 Ford Mustang, kept at a chop shop owned by Abram Tarasov (Peter Stormare), Viggo's brother and Iosef's uncle. The whole sequence, full of ear-piercing, crunching metal mixed with the dull thumps of fists, unfolds with knowing intentions, as Tarasov puffs on his cigar while dramatically narrating the legend of John Wick to his tattooed henchman.

It's an amusing pause for summarizing everything that preceded it, but anyone coming into this sequel already knows this and the infamous tale of the pencil killing, allowing said henchman to interrupt like some kind of audience surrogate. We just want to arrive at the point of this follow-up, which director Chad Stahelski and writer Derek Kolstad are more than happy to provide when Italian crime boss Santino D'Antonio (Riccardo Scamarcio) appears at John's house. Lightly dipping his toes into the crime world he left behind has garnered some unintended attention, particularly a blood-oath promise made to D'Antonio called a Marker. If the first movie was John's focused pursuit of vengeance, an emotional journey to regain a semblance of hope that was taken away from him after his wife's death, then this sequel is a pilgrimage for atonement, to find some sort of absolution for his sins. As hinted by Winston (Ian McShane), a woman brought John out the darkness and gave him a taste of goodness, but the ghosts of his former life will forever haunt him, like a thorn in the back of the mind that can never be removed. 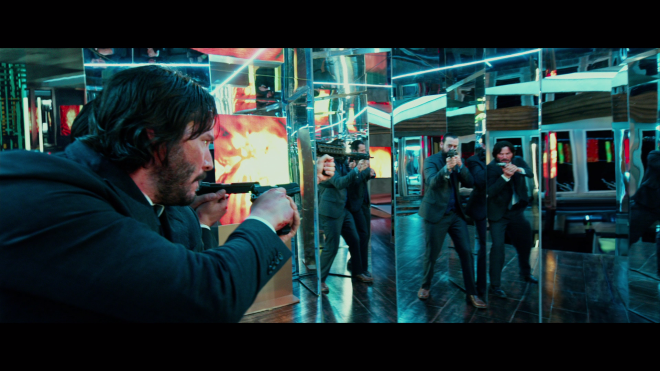 But in order to gain deliverance, our gloomy hero must return to that dark world he renounced and abandoned. Like the statues inside D'Antonio's museum pitting the Olympians against the Titans, Kolstad's plot fascinatingly blossoms into an ancient mythological tale, something akin to the Orpheus and Eurydice legend. John must travel back into the underworld to save his own soul, and rather than music or singing being his talent, it is in a supernatural-like ballet of violence. For Stahelski, this is an opportunity to expand on the mythology vaguely implied in the first chapter, revealing the inner workings of this elaborately complex society. There is a leadership and governmental-like system with strictly obeyed rules and laws, but as it turns out, even this complicated but rigidly followed network is not without its intrigue, corruption and double-crosses. For fans of the previous film, this guided tour through the clandestine world of crime lords and assassins is a more than satisfying highlight in an action neo-noir thriller that is much smarter and knowing than it initially leads on.

Like its predecessor, John Wick: Chapter 2 is a return to the basics, a throwback of sorts to old-fashioned action movies without feeling retro or as if intentionally being nostalgic. Stahelski and editor Evan Schiff allowed viewers to actually be mesmerized by the carefully choreographed fights, to grasp that the actors and stuntpersons worked really hard at accomplishing much of what we see on screen and not disguised in the flashy, dizzying, rapid-fire editing of late. One my favorite yet deceptively simple sequences are those with the tattooed switchboard operators where the ladies work in antiquated fashion. In this mythological underground crime world, there is a continued, sentimental value in doing things the old-fashioned way while still taking advantage of new, digital machines. There is something more organic and fulfilling of the old-school methods for communication while not denying the usefulness of modern technologies, such as the final fight sequence being an allusion to Orson Welles's The Lady from Shanghai. Along with the lush, beautifully hypnotic cinematography of Dan Laustsen to make the violence ironically spellbinding, the real success of this neo-noir series is in its desire to mix the past with the new in cleverly innovative ways.

Lionsgate Home Entertainment brings John Wick: Chapter 2 to 4K Ultra HD Blu-ray as a two-disc combo pack with a flyer for a Digital HD Copy. Inside a black, eco-cutout case with a glossy slipcover, a triple-layered UHD100 disc sits comfortably opposite a Region A locked, BD50 disc. At startup, the disc goes straight to an animated menu with John Wick looking like a graphic novel character and music.

John Wick charges into the assassin underworld with a high-class, top-drawer HEVC H.265 encode in HDR10 that turns every violent action sequence into a classy ballet of guns, fists and knives.

Shot digitally using the Arri Alexa camera system up to 3K resolution, the upconversion isn't significantly sharper than its HD counterpart, but it is nonetheless more revealing with appreciably better definition of the most minute detail. From the individual bricks of the buildings in New York or the catacomb ruins to every hair and fiber in the costumes, fine lines are consistently distinct and resolute, exposing the tiniest imperfection in the ancient buildings of Rome while making Wick's house and the Continental look all the more immaculate because nothing seems out of place. Even in medium shots of cast members, viewers can make out the tiniest pore, scratch and wrinkle, making every nick and wound on our antihero's face clearer while everyone else comes with incredible lifelike textures.

Considering Dan Laustsen's heavily-stylized, neo-noir photography, contrast isn't dramatically improved, but the overall cinematography is nonetheless enhanced, showing brighter, sparkling whites in every scene. This not only makes button-down shirts appear cleaner and clean-cut than before while now revealing minor creases, but it also makes the subway sequence during Wick's return home more exciting because the immaculate walls pop more. The more noteworthy improvement, however, comes by way of specular highlights, allowing noticeably better clarity in various light sources, such as being able to see the filament inside antique light bulbs or seeing a bit more detailing through the windows during aerial shots of the city skyline or of the Vatican.

By far, black levels are richer and more luxurious than before, providing the clothing and vehicles with a mesmerizing silkiness and lush inkiness. The darkest portions of the frame never engulf the finer details while maintaining exceptional gradational differences between the various shades. The palette also reveals this 2160p video a massive upgrade over the Blu-ray, dazzling the screen on various occasions with fuller, more passionate reds and intensely electrifying blues. Here, owners have their choice of action sequence to demo because they all come with a wider array of vividly bold colors while the richly-saturated neon lights glow more energetically and with a bit more enthusiasm. Even in the distance, advertisements twinkle and glitter with a passionate intensity.

The 4K presentation is simply gorgeous, as if watching it again in theaters, and it is the definitive way of enjoying the awesome action sequel.

As enjoyed on the Blu-ray, the emotionally-driven assassin revisits his ghosts with the same subtle and aggressive Dolby Atmos soundtrack sure to leave the house tired and weary in the end.

Immediately in the opening moments, the design erupts with the muffled, throaty growls of a 1970 Chevrolet Chevelle roaring through the city streets. The entire room fills with the echoes of screeching tires as the muscle car skids across tight turns, and much of that reverberates into the ceiling channels, further pulling viewers into Mr. Wick's focused reality. Things only get better, I mean demo-worthy better, during the two major shootouts at the catacombs and the museums. In those incredibly immersive moments, the blasts of gunfire bounce off the walls and resonate into every speaker, generating an awesomely satisfying soundfield that fully immerses the listener into the action. Meanwhile, bullets ricochet off walls and debris flies into the sides and rears. Quieter scenes are not quite as active or immersive, but the occasional ambient effect is subtly heard to keep things from falling into complete silence.

Most of the object-based mix crowds the front soundstage with lots of background activity. Whether it's the endless commotion of city traffic, the loud cheers of spectators at a concert or Wick walking around the rubble of his house, imaging continuously feels spacious and broad as a variety of noise litters and moves convincingly between all the three channels. A very dynamic mid-range exhibits extraordinary detailing in the loudest, most tumultuous segments, delivering exceptional clarity in every crunch of metal on metal and in every gunshot fired. In fact, tiny bits of glass shower everywhere with crystalline directionality, cars grind against one another with ear-piercing precision, and debris from bullets ricocheting off walls and statues land on the floor with incredible realism. Amid all the mayhem, dialogue remains distinct and intelligible. Meanwhile, a commanding low-end digs deep with authority on several occasions, providing action sequences with a powerful palpability and a room-energizing oomph in the music.

Audio Commentary: Director Chad Stahelski is joined by star Keanu Reeves where the two men talk extensively about the production and sharing various memories from the set. Although much of the conversation is scene specific with several pockets of silence, there is much to glean from their chat.

Friends, Confidantes: The Keanu/Chad Partnership (HD, 10 min): A discussion on the relationship of the two men, how they originally met and the camaraderie that makes them a good team.

Wick's Toolbox (HD, 8 min): A closer look at the weapons with a detailed education on a few of the guns.

Retro Wick: Exploring the Unexpected Success of John Wick (HD, 5 min): As the title implies, the piece is an assortment of cast & crew interviews expressing their thoughts on the first movie.

WICK-vizzed (HD, 5 min): A look at how pre-visualization assisted in the stunt, fight and gun choreography.

As Above, So Below: The Underworld of John Wick (HD, 5 min): The work and attention to detail that went into expanding the mythology of the film's crime world and shooting on location.

Kill Count (HD, 3 min): A couple minutes recounting the kills with a mix of BTS footage and film clips.

A Museum Tour with Sir Jonathan Wick (HD, 2 min): A somewhat comical guided tour through some of the rooms of the museum spliced with violent scenes from the movie.

Staying true to the title's connotations, John Wick: Chapter 2 picks up soon after the events of the first movie, forcing our titular antihero back into the criminal underworld he wanted to leave behind. Expanding on the mythology and lore established in the previous film, John Wick's battle against the ghosts of his past delivers a straightforward, old-fashioned actioner, but can also be enjoyed as a poignant tale of self-discovery and absolution. The Ultra HD Blu-ray arrives with a gorgeous 4K video presentation and the same reference-quality Dolby Atmos soundtrack that'll leave the house exhausted from the beautifully choreographed action. A mild collection of supplements are informative though still a bit wanting. Nevertheless, the overall package is recommended.

Sale Price 10.73
List Price 22.99
Buy Now
3rd Party 5.74
In Stock.
See what people are saying about this story or others
See Comments in Forum
Previous Next
Pre-Orders
Tomorrow's latest releases