There is, within 'John Wick,' not one ounce of wasted action. The entire movie is a masterclass in efficiency. It's actually startling how precise the entire movie is. From the dialogue, to the action sequences, to the way John Wick (Keanu Reeves) dispatches bad guys with brutal effectiveness, it's all about completing an action in the most efficient and memorable way possible. If there were an action director university, one of the first courses of study should be 'John Wick' 101: The Art of Efficient Action.

The club sequence in 'John Wick' epitomizes what I'm talking about. I feel, if I had sufficient time, that I could write thousands of glowing, hyperbolic words on how that sequence makes me feel as an action movie aficionado. Since I don't have the time, and you most likely don't have the patience, I'll distill gushing into a few succinct thoughts. The aforementioned club scene is meticulously planned, expertly choreographed, and flawlessly edited. Wick, an ex-hitman brought back into the fold under extenuating circumstances, is a ferocious fighter, but he doesn't waste a single movement or bullet. As he storms through a nightclub, killing Russian mafia with calculated martial arts and ruthless double-taps, the whole arrangement turns into a sort of bloody ballet. The editing never betrays the abilities of the stuntmen, or Reeves. This isn't an action sequence where rapid-fire cuts blur the reality of what's happening. The camera is steady. Cuts are judicious. It's so perfectly constructed, so flawlessly executed that I'm unsure if there was a better action sequence in all of 2014 (although, 'The Raid 2's car chase is pretty astounding also).

However, it isn't just the action in 'John Wick' that makes it one of the most imaginative and entertaining movies from last year. The script is just as devastatingly precise. There's another moment in the movie that illustrates this perfectly. We've established that Wick is an ex-hitman. What we haven't discussed is why he goes on his gun-toting rampage of revenge. A few Russian gangsters break in one night, steal his prized Mustang, and kill his beloved dog. Once the dog is dead, all bets are off right? I mean, it's an open ticket for a man like John Wick to utterly lay waste to whomever is responsible. We never fault him for his decision, because it's so reasonable. Who kills a dog? I mean, really? Anyway, what I'm getting at is that without knowing anything about John Wick's past, the movie describes exactly who he is by a two-letter response uttered by the movie's mob boss Viggo Tarasov (Michael Nyqvist). Tarasov is on the phone with an associate who tells him that Tarasov's son (Alfie Allen), stole John Wick's car, and killed his dog. In one of the best delivered lines in all of 2014, Tarasov responds with a decisively frightened "Oh!" and hangs up. 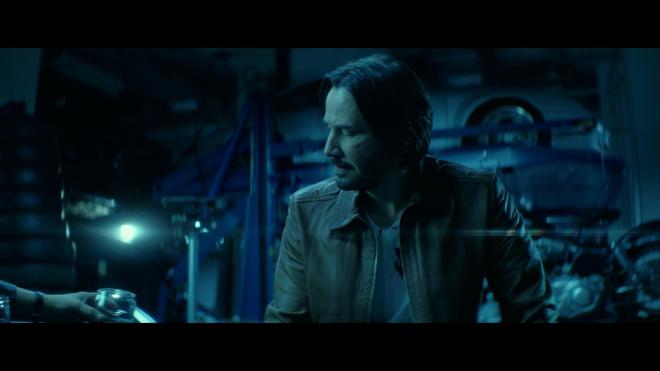 That "oh," impressively describes exactly who John Wick is, who he was, and what he will do to those responsible. I can't think of another movie that has packed so much characterization into such a small utterance. Like the movie's action, the movie's dialogue is all about efficiency. Like I said, never a wasted moment. Never a wasted movement.

Reeves' physical ability here is startling. The action choreography appears to be grueling to say the least. The result is gun-fu gunplay which is viciously artistic. He's perfect for this part. A loner, with a depressing past, who isn't asked to say a whole lot, but is asked to do a ton.

Finally, adding to the overall ambiance is the complete world-building creation of a criminal underworld that operates seemingly separated from regular society. When Wick returns to the world of hitmen, his currency is gold coins and he checks into The Continental. A swanky criminal-only hotel that caters to those of Wick's ilk. The hotel is supposed to be neutral ground. Even criminals have a code, and here the possibilities are endless. I suspect that an entire cable TV show could be based on the occupants of The Continental.

'John Wick' was truly one of the great surprises of 2014. It gets even better with subsequent viewings. Observing how quick and precise the action scenes are is intoxicating. There's nothing like well-choreographed, expertly edited action to bring a run-of-the-mill movie out of the doldrums of been-there-done-than and into the light. And, 'John Wick' certainly is a light among its peers.

Lionsgate Home Entertainment brings 'John Wick' to 4K Ultra HD Blu-ray as a two-disc combo pack with a flyer for a Digital HD Copy. At the moment, we are unable to verify the correct size of the content, but the dual-layered UHD66 disc sits comfortably opposite a Region A locked, BD50 disc inside a black, eco-cutout case with a glossy slipcover. At startup, the disc goes straight to the main menu with full-motion clips and music.

At first glance, the jump to UHD seems minor, but the subtle differences over its HD counterpart are worthwhile and make this an excellent improvement. The details in the clothing and furniture are significantly sharper, showing every minute wrinkle, crease and furrow in the leather and Wick's suits. Facial complexions are extraordinarily revealing and lifelike, exposing the tiniest pore and blemish in the faces of the entire cast. Background information is plainly visible in the distance, and the little pock marks in the brick and stone architecture of the city is distinct. Unfortunately, I noted a few instances of minor aliasing and even a couple scenes showed mild banding in the sky. It's not too damaging or distracting, but it's there all the same.

On the other hand, these slight, arguably trivial, artifacts can be overlooked in favor of the improved contrast levels. The overall, noticeably brighter 4K presentation is showered with brilliant, pitch-perfect whites. Specular highlights radiate with dazzling luminosity, providing the fluffy clouds an enthusiastic glow while the metallic edges of guns and chrome trim of cars show a true-to-life sparkle. Better yet, brightness are amazingly dynamic with precise gradational difference between the various shades, delivering pitch-black shadows and a lovely cinematic appeal to the 2.40:1 image. Although largely limited and deliberately restrained, Jonathan Sela's cinematography displays a wide and varied teal-orange palette with primaries benefitting the most, making reds appreciably fuller, and flesh tones appear more realistic. Fans will also notice the teal and green-blues in the photography are more vibrant.

Our favorite, emotionally-driven assassin is back with the same impressive and terrifically satisfying Dolby Atmos soundtrack that was heard on the Blu-ray. The design is an awesome mix of subtle and aggressive.

Depending on which scene we're talking about, the movie is continuously showered with a variety of noises in the background. Whether it's the busy hubbub of city life, guys working on cars in a garage or the hullabaloo of a nightclub, imaging feels expansive with an appreciable sense of space and presence. The mid-range is extensive and highly dynamic, maintaining extraordinary clarity during the loudest, action-packed segments as well as the quieter, more dialogue-driven sequences. A robust and occasionally authoritative low-end delivers a palpable feel to each gunshot, a powerful rumble to explosions and a room-energizing oomph to the music. And vocals remain distinct and precise in the center amid the mayhem.

The same level of excitement continues in the surrounds, creating an awesomely immersive soundfield that pulls viewers into the midst of action. Various effects move into the sides and rears with discrete effectiveness and outstanding panning, along with many of those same aforementioned bits of activity. The sequence at the Red Circle club is one of the best moments while shootouts are layered with bullets whizzing by and echoing all around. The object-based format also allows for a good amount of activity spilling into the ceiling speakers, displaying fluid movement from the front to the back and vice versa, such as helicopters flying overhead or rain pouring down directly from above. The music participates in the fun by bleeding into the front heights in every scene, creating a sometimes overwhelming and highly engaging half-dome soundstage. It's a fantastic lossless mix that beautifully complements the visuals.

'John Wick' is one of the best action films in a very long time, driven by an emotionally gripping plot and a stylized, contemporary noir feel that's invigorating. Starring Keanu Reeves as a retired assassin on a vengeance trip, the film works on many levels, from an easily digestible actioner to an intelligently poignant twist on the five stages of grief. The Ultra HD Blu-ray arrives with an excellent 4K picture quality and the same outstanding Dolby Atmos soundtrack. Although the package features the same set of supplements as before, fans and early adopters will be more than happy with the upgrade to UHD.

Sale Price 10.73
List Price 22.99
Buy Now
3rd Party 7.38
In Stock.
See what people are saying about this story or others
See Comments in Forum
Previous Next
Pre-Orders
Tomorrow's latest releases