The Wachowskis' landmark cyberpunk kung-fu noir leaps, dodges, and hurls its way onto 4K Ultra HD Blu-ray with a dramatically improved Dolby Vision and HDR10 high dynamic range video presentation as well as a reference quality Dolby Atmos hemispherical soundtrack. This set also includes a newly remastered standard Blu-ray of the film along with tons of bonus materials created for previous home video releases. Highly Recommended for anyone who loves The Matrix.

She jumped in the air and the camera swirled around her. At that one moment, everything about big-budget moviemaking changed. While many late-1990s science fiction films such as Dark City and Strange Days embraced a similar grim, urban aesthetic, The Matrix absorbed it, internalized it, and expanded upon it. The original film would be seminal in stretching the boundaries of computer-generated imagery -- literally. Characters run along walls before delivering a kick. Bullets visibly ripple through the air, moving slowly enough for their intended targets to move out of the way. Neo (Keanu Reeves) and Trinity (Carrie-Anne Moss), wearing black trench coats and black sunglasses, shoot their way through an office lobby leaving heroic amounts of shattered concrete and dead bodies. By the time it was over, audiences had a new benchmark for what constituted cool.

It's been nearly two decades since The Matrix first ripped through the pop culture consciousness, and two sequels and over a billion dollars in worldwide box office later, the dust has finally settled long enough that it's possible to look back and better assess the film's place in the sci-fi cinematic pantheon. It's clear now that, as filmmakers, The Wachowskis were not content to just drape everyone in black and call it style. Nor did they simply rely on their extraordinary visual sense. The Matrix depends on obvious religious parallels (Neo has been interpreted to be a spiritual stand-in for everyone from Jesus Christ to Buddha) to give it a familiar, universal feel and a philosophical bent.

But, like the outlet embedded in the back of Neo's head, the real power of The Matrix is its ability to plug into the psyche of its target audience: young males. The idea that our world is an elaborate simulation meant to divert us from the knowledge that our bodies are being enslaved and harvested for energy by sentient computers is at once heady, ridiculous and supremely clever. As such, it played right into the hearts and minds of a generation. Much as Crouching Tiger, Hidden Dragon introduced mainstream American audiences to the Chinese martial arts films, The Matrix introduced us to the kinetic visuals of Japanimation, John Woo-inspired violence and the Cyberpunk ethos pioneered in the novels of William Gibson.

At its core, The Matrix embodies a delicious paradox: using state-of-the-art technology, it tells its story of mankind's near destruction brought about by our reliance on state-of-the-art technology. In the dark ages of the late 1990s, with society reaching a point of no return in its dependence upon the internet, cell phones and global positioning systems, The Matrix asked moviegoers to think about the implications -- and to never underestimate the power of black leather. 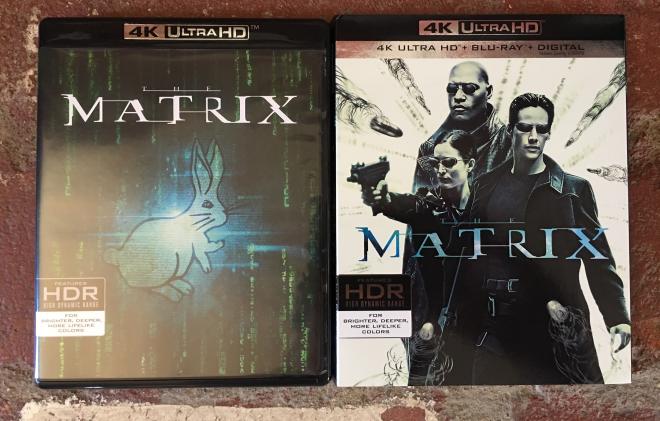 The Matrix takes the red pill to 4K Blu-ray as part of a three-disc + digital combo pack. As pictured above, beneath a white slipcover featuring three main cast members, you'll find a black case adorned with matrix code and a white rabbit. Inside, there is one UHD Blu-ray, two Blu-rays, and a Digital Copy code to access the movie via Movies Anywhere (and partners). At this time, The Matrix does not appear to be available to stream in 4K so we're waiting to redeem the code until release date to see if the code unlocks UHD streaming. Stay tuned.

5/22/18 UPDATE: Redeeming the provided code unlocks rights to stream the 4K version of the movie. At this time, The Matrix is available in 4K Dolby Vision via iTunes, 4K HDR10 via FandangoNow, and possibly other locations. Oddly enough, it is still in HD on VUDU.

In what might be a first (or, at least, a rarity) in the 4K era, Warner Bros. Home Entertainment used a new 4K restoration and Digital Intermediate to create both a 2160p HEVC-encoded Ultra HD Blu-ray with Dolby Vision (and HDR10) high dynamic range grading in the DCI P3 color space, AND a new 1080p AVC MPEG-4-encoded Blu-ray with standard dynamic range grading in the Rec.709 color space. At a time when studios simply include the old Blu-ray and call it a day, this is terrific news, but there's one catch. If you want to enjoy this new transfer or the new Dolby Atmos mix on Blu-ray disc, you have to purchase this 4K set. (NOTE: if this changes, do let us know.)

This is primarily a 4K review, but let's start with the new Blu-ray first because, in and of itself, it's a dramatic upgrade from the 2009-era Blu-ray. Even though our writer awarded that release a 5-star video grade at the time, in hindsight, and in comparing all three discs for this review, I'd call the original Matrix Blu-ray a 3.0 or 3.5 transfer at best. It's a mess of digital tinkering, poor detail rendering, smeared color grading, and banding galore.

Pop in this new Blu-ray and you are rewarded with more detail, improved contrast, and much less banding. In other words, the 1080p Blu-ray is an obvious upgrade that makes its older sibling look fugly by comparison. Also, I'd argue this new master looks much closer to the film's original theatrical presentation and less like the Reloaded/Revolutions green-everywhere color grading that was a bit like that first Fellowship of the Ring Blu-ray. Skin tones and contrast are on point and there's plenty of shadow detail, but without HDR, black levels hover somewhere just-above true black. The special and visual effects still look good, for the most part, save for the CGI-generated machines, which can seem a bit flat and cartoony when not drenched in shadows. There's also a touch of banding and haloing around contrasty subjects, but it's not severe. Despite a few flaws, The Matrix has never looked better in HD.

That said, if you own a 4K TV with Dolby Vision or HDR10 capability, forget the new Blu-ray because THIS 4K Blu-ray is the ultimate way to watch The Matrix.

Perceivable resolution takes another step forward, revealing fine details in the costuming, actor faces, and production design. The film grain structure is also more prevalent, alluding to the movie's Super 35mm origins. Yet, despite these improvements, I couldn't help but notice that overall sharpness isn't always consistent. As an example, look at Chapter 13, which begins with a Neo-Morpheus conversation. Neo's clothing and Morpheus' face are crisp and detailed while Neo's face seems a touch waxy. Perhaps it's a depth of field issue in the original photography or perhaps some digital smoothing has been applied, I can't quite tell.

However, that's the only fault I found. Colors are bolder and more vivid, naturally -- look at the greens as we dive through computer screen numbers, the pure whites of the simulations, the deep blue skies, and the rich red tones of the TV in the scene where Morpheus reveals the post-apocalyptic truth to Neo. Contrast and shadow delineation are excellent as well; seriously, this disc might boast some of the inkiest black levels I've ever encountered in the HDR era. Black costumes cloaked in shadows cloaked in more shadows... except you can still see details in said shadows. There are no signs of banding or digital compression errors, and the visual effects work doesn't look any worse than the SDR Blu-ray (HDR + VFX can be problematic). In fact, some of the effects, most notably The Sentinels featured in the film's climax, remain convincingly, terrifyingly real.

It is worth noting that, for those with dimmer or entry-level HDR10-only TVs, you might consider using the standard Blu-ray because, without enough nits, the HDR10 grading may appear too dark (it's similar to Pacific Rim). In Dolby Vision, which uses dynamic metadata to make the image work with each TV's capabilities, this isn't a problem.

We've had one heck of a month for 4K catalog titles and, while I wouldn't call The Matrix 4K Blu-ray perfect, it's an impressive, obvious upgrade over both the original Blu-ray and the newly remastered one also included in this set.

There's only one problem with this new Dolby Atmos soundtrack: it's not the default audio option when you play or resume the movie. Other than the ergonomics of it all, The Matrix boasts one of the finest Dolby Atmos remixes we've ever heard and one that offers more object-based immersion than many newer, native mixes.

Available on both the 4K Ultra HD Blu-ray and Blu-ray (thank you, Warners!), The Matrix roars to life with an intense, reference quality Atmos mix that's sure to test the accuracy of any Dolby Atmos home theater system or sound bar. The movie has been a go-to demo disc since the days of DVD, but this is a whole other level.

If any of you read my recent Gladiator and Braveheart 4K reviews, you may recall that I enjoyed those mixes, but felt they were holding back in terms of overhead immersion. The Matrix, by comparison, is foot-to-the-floor wide open throttle the whole time. And the best part? Because the movie oozes kinetic, mind-bending visuals, aggressive overhead and surround panning fits the aesthetic perfectly. Rain and thunder cascade from above. When the camera pushes into The Matrix, it feels like you're falling into another world. When the bullets slow down to super slow motion, it sounds like they're just missing you. We're talking Fury Road levels of hemispherical immersion, folks, and this sound mix is shiny and chrome on the road to Valhalla -- oh, what a day, what a lovely day!

LFE effects are also impressive, punctuating gunshots and explosions with heart-pounding grunt. Dialogue is clean and intelligible. Don Davis' pulsating score also surrounds the audience as it helps build the movie's sensations of tension, horror, and wonder. Everything sounds clean and dynamic and like it was recorded in 2018, not 1999. Honestly, if Warners can make an older mix sound this good, Disney should be embarrassed by their new releases.

If you have a Dolby Atmos sound system, you're going to love The Matrix.

Warner Bros. Home Entertainment appears to have thrown the kitchen sink at this release. Here's what you'll find:

Written Introduction by The Wachowskis

Everything on the 4K Blu-ray plus:

At nearly 20 years old, The Matrix may seem a little quaint at times because of how much technology has evolved in the last two decades, but the film still plays as a wildly original blend of pop-culture and philosophy produced with jaw-dropping visuals. This 4K Ultra HD Blu-ray set is an absolute home run -- you get Dolby Vision and HDR10 on the 4K Blu-ray, a newly remastered Blu-ray, Dolby Atmos on BOTH, and just about every special feature ever produced about the movie.

Unless you're waiting for a full trilogy boxed set (which, to be clear, has not been announced), this 4K Blu-ray set is Highly Recommended for Matrix fans with 4K or HD setups. The 4K disc is perfect for anyone with Dolby Vision or a bright HDR10-only display, while the new Blu-ray is great for those with standard dynamic range displays or anyone with an entry-level HDR10 TV that doesn't do well with very dark scenes.

Sale Price 19.48
List Price 41.99
Buy Now
3rd Party 13.97
In Stock.
See what people are saying about this story or others
See Comments in Forum
Previous Next
Pre-Orders
Tomorrow's latest releases