One of the greatest heist films of all time - and a damn good film noir, too - The Killing makes its 4K UHD debut, as Kino Lorber continues to celebrate the early work of iconic director Stanley Kubrick. A brand new 4K remaster struck from the original camera negative yields a breathtaking transfer that's sweetened by the addition of Dolby Vision HDR. Kubrick's brash artistry, Jim Thompson's snappy dialogue, and terrific performances from an ensemble cast led by the strapping Sterling Hayden make The Killing a captivating thriller that never strikes a sour note. Solid audio and a dynamite commentary track enhance the appeal of this definitive release. Highly Recommended.

Heist films are a dime a dozen in Hollywood and crop up in almost every genre. Some are elegant (Ocean's Eleven), some are gritty (The Asphalt Jungle), some are comedic (A Fish Called Wanda), and some are romantic (The Thomas Crown Affair), but only one was directed by the great Stanley Kubrick, and it stands as one of the best heist movies of all time. Kubrick made The Killing when he was just 27 years old on a shoestring budget when he was still trying to get his foot in the door in the film industry. It didn't make money, but it made a huge impression, most notably on Kirk Douglas, who loved this taut noir thriller so much, he engaged Kubrick to helm his next feature, the devastating World War I drama Paths of Glory. The rest, as they say, is history.

I could watch The Killing over and over again and never tire of it, because there's so much to savor and absorb in this brisk, seductive, surprising, and stylish film. The craftsmanship alone is mind-blowing when one considers Kubrick's tender age and limited budget, and the performances he wrings from his accomplished cast are nothing short of extraordinary. Every element fits into the whole with the precision of a Swiss watch. Though the caper may get messy as it unfolds and unravels, the movie itself is sleek and clean. It brims with artistry and creativity, but it's not show-offy in the least. Kubrick respects his story and tells it with a refreshing forthrightness that increases its power and irony. Confidence is everywhere, but there's no bravado. The Killing is raw and real - or at least as real as a movie made in 1956 could be with the Motion Picture Production Code still in effect - and it's that authenticity that keeps it relevant and terrifically entertaining more than six decades after its premiere. 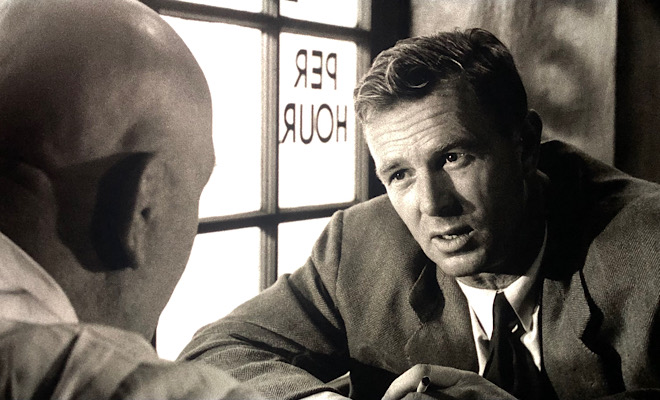 Distinguished by a brilliant non-linear structure that moves back and forth in time with remarkable agility, The Killing follows a ragtag group of average joes who plot to knock over a California racetrack. Johnny Clay (Sterling Hayden), who's just served a five-year stint in prison for petty robbery, masterminds the ambitious, seemingly airtight scheme that springs a leak when mild-mannered, insecure racetrack cashier George Peatty (Elisha Cook, Jr. in a career-defining performance) spills the beans to his sexy, manipulative wife Sherry (Marie Windsor). Little does George know, Sherry is two-timing him with Val Cannon (Vince Edwards), a hot-blooded hoodlum with mob connections, and the illicit lovers hope to hijack the heist and take the spoils.

Revealing any more would spoil the fun of this perfectly constructed and executed film that rivets attention from the first frame to the last. Gorgeous shot compositions and Lucien Ballard's lush yet naturalistic cinematography keep the eye engaged, while Jim Thompson's lively, lyrical dialogue and Gerald Fried's muscular score delight the ear. Plenty of location shooting, slick art direction by Ruth Sobotka (Kubrick's wife at the time), a palpable noir feel, and consistent tension also contribute to the movie's success. Kubrick only takes screen credit for direction and screenplay (though he should have shared the writing credit with Thompson, who supplied all the priceless dialogue), yet his influence is everywhere. His constant meddling and megalomania drove Ballard to distraction (he almost quit),  but on the flip side, Kubrick's vision, attention to detail, and unwillingness to settle for anything less than the best make The Killing the masterpiece that it is. 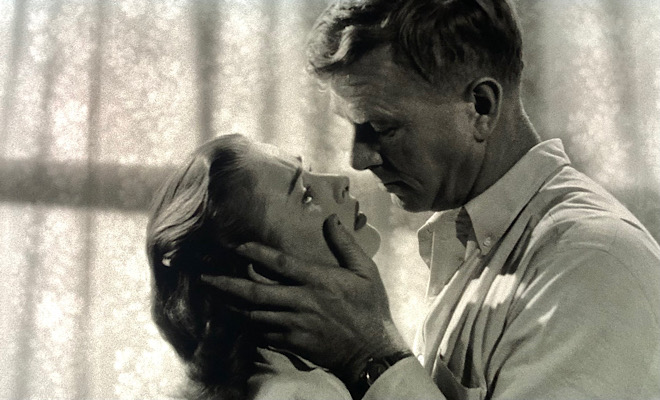 Hayden, who also starred in the other greatest heist film of all time, 1950's The Asphalt Jungle, carries the picture with a rock-solid, square-jawed portrayal laced with swagger and grit. Hayden's everyman persona instantly draws us into the tale, while his no-nonsense, all-business demeanor propels it. He and Coleen Gray, who plays Johnny's long-suffering, ultra-loyal girlfriend Fay, enjoy a tender yet sexy rapport, though it's a shame the lovely Gray only appears in the movie's first and last scenes.

Hayden's Johnny may be The Killing's most dominant character, but he's far from the most interesting. That distinction belongs to George and Sherry, one of the screen's most deliciously dysfunctional couples. Cook and Windsor, who always make strong impressions no matter how tiny the role, really get a chance to shine here, and both maximize the opportunity. With her slight Southern accent, blonde hair, and vain and flirtatious nature, Windsor's Sherry resembles a femme fatale version of A Streetcar Named Desire's Blanche DuBois. Her understated performance oozes allure and her line deliveries drip with honey-laced venom, so whether she's slyly manipulating her milquetoast husband or melting into the arms of the virile Val (played with lascivious glee by the swarthy Edwards), it's impossible to take your eyes off Windsor while she's on screen. 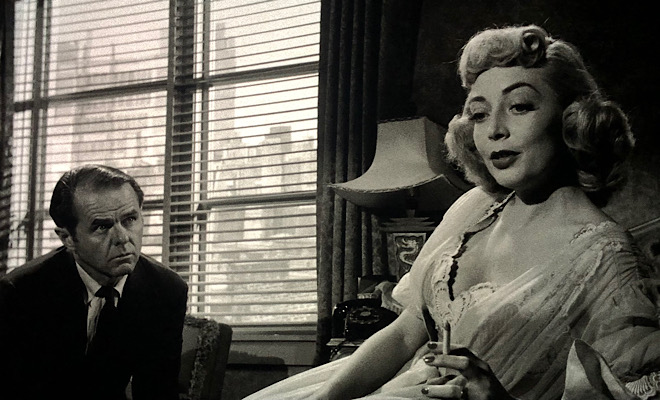 The same is true of Cook, who portrayed countless weasels and neurotic weaklings throughout his lengthy career, but none more fascinating than the soft-spoken, deeply insecure George, whose bug eyes convey shock, longing, disillusionment, and a deer-in-the-headlights naïveté. His combustible chemistry with Windsor creates a crackling tension that keeps us transfixed throughout their scenes together. (Take a gander at one of them below.) Cook reportedly cited The Killing as his favorite film - quite a statement considering his 220 movie and TV appearances - and it's easy to see why. It's just a shame neither he nor Windsor received Oscar nominations for their superior work.

All the roles in The Killing are perfectly cast and beautifully executed. The names Jay C. Flippen, Ted de Corsia, Joe Sawyer, James Edwards, Timothy Carey, Jay Adler, Tito Vuolo, and Dorothy Adams may not be familiar, but their faces sure are, thanks to their participation in hundreds of Hollywood classics. Much to his credit, Kubrick showcases them all with juicy scenes and lingering close-ups that allow each of them to fully delineate their respective characters. It's rare for a movie to fully develop so many supporting players, but that's just one of the components that makes The Killing such a rich and satisfying film.

Beyond its "crime doesn't pay" message, The Killing isn't very deep, although it briefly - and very effectively - addresses racism in one potent scene. It does, however, incisively depict how normal, upstanding people can turn to crime for reasons other than abject greed. As Johnny tells Fay, "None of these men are criminals in the usual sense. They've all got jobs. They all live seemingly normal, decent lives. But they've got their problems and they've all got a little larceny in them." Their humanity and respective plights earn our sympathy and make us root for this motley band of "bad" guys even though we know they're doomed from the start. Eighty thrilling minutes later, the terrific Treasure of the Sierra Madre-like finish ices this tough, brutal tale that's packed with gasp-inducing surprises and irony galore. 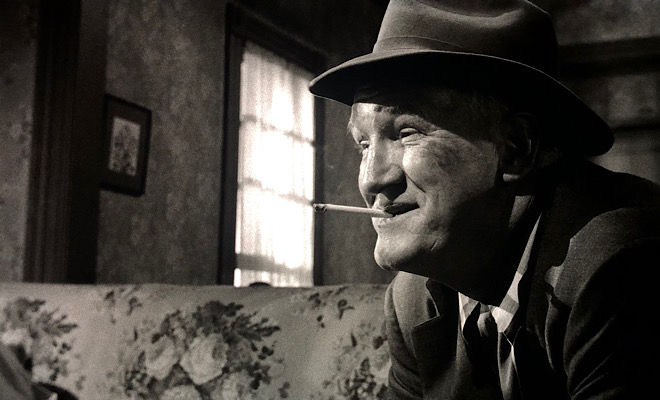 The modest nature of The Killing may diminish its stature when compared to such iconic Kubrick classics as Dr. Strangelove or: How I Learned to Stop Worrying and Love the Bomb, 2001: A Space Odyssey, A Clockwork Orange, and The Shining, but this deliriously entertaining film noir/heist hybrid looms large in the broader cinematic sphere and has influenced countless other movies, including Reservoir Dogs and The Dark Knight. It's a treat to watch Kubrick's genius coalesce before our eyes, but that's only one of The Killing's myriad joys. Watch it, and you'll discover all the others. 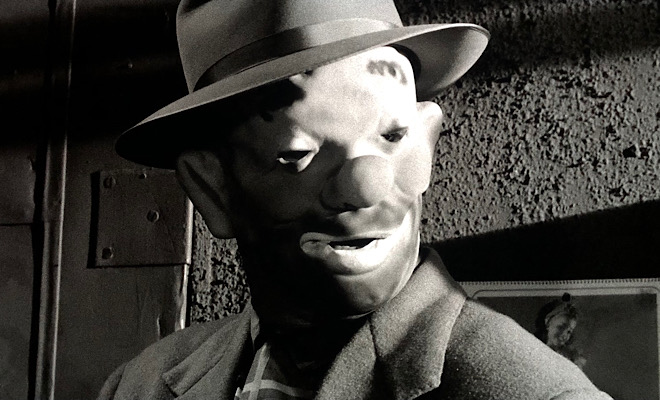 The Killing arrives on 4K UHD packaged in a standard case inside a sleeve. Video codec is 2160p/HEVC H.265 and audio is DTS-HD Master Audio 2.0 mono. Once the disc is inserted into the player, the static menu with music immediately pops up; no previews or promos precede it.

The second early Kubrick film to receive the 4K UHD treatment, The Killing looks fantastic in the format, thanks to a brand new 4K scan of the original camera negative. The 2160p/HEVC H.265 transfer with Dolby Vision HDR flaunts exceptional contrast, clarity, and shadow delineation (the nocturnal exteriors and dimly lit interiors are razor sharp) while maintaining a natural grain structure that provides a palpable film-like feel. Yes, there's noticeable digital noise in solid light backgrounds, but that's a small price to pay for such a vivid, brilliant picture.

The smallest details grab attention. You can see a fly buzzing around Jay Adler in an early scene, count the individual flakes of dandruff on Jay C. Flippen's suit jacket, pick out some of the graffiti etched into the metal plate of a police call box, and notice all the crinkles in the paper of a hand-rolled cigarette. Such noir staples as swirling cigarette smoke, filtered shafts of light, and bold shadow patterns are also quite crisp, and no motion blur or raggedness afflict the lengthy follow shots of the horse race. Lush blacks and bright, stable whites anchor the image, while beautifully varied grays enhance depth and contour. Crystalline close-ups show off Coleen Gray's glossy lips, Elisha Cook, Jr.'s wide, frightened eyes, Marie Windsor's silky complexion, Hayden's ruggedness, and the weathered faces of Flippen, Adler, and several other character actors, and nary a single nick, mark, or scratch dots the pristine print. 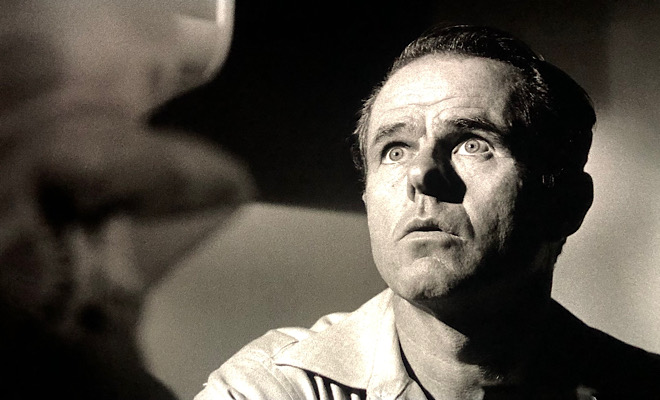 Though I can't compare this spectacular 4K UHD rendering of The Killing with Criterion's 2011 Blu-ray, it's difficult to imagine this Kubrick classic looking better than it does here. If you're a fan of this riveting heist film, you'll definitely want to grab this glorious upgrade.

The LPCM mono track from the 2011 Criterion Blu-ray has been replaced with a DTS-HD Master Audio 2.0 mono track that exhibits excellent fidelity and depth of tone. From the pounding of horse hooves against the dirt racetrack to the background noise at the betting booths and airport ticket counter to the soft jazz stylings underscoring the intimate scenes between Elisha Cook, Jr. and Marie Windsor, the sound is consistently bright, occasionally bold, and wonderfully nuanced.

Sonic accents like gunshots, fisticuffs, revving car engines, and the rumbling whir of plane propellers are distinct, and a wide dynamic scale handles the bombastic highs and sultry lows of Gerald Fried's music score without any distortion. All the dialogue, except for the heavily accented mumblings of Kola Kwariani, who plays the burly Maurice, is easy to comprehend, and though some surface noise is audible during a few quiet scenes, the bulk of the track is free of hiss, pops, and crackle.

The Killing audio track may not be perfect, but it serves the film well.

Just a couple of extras are included on the disc. None of the supplements from the 2011 Criterion Blu-ray have been ported over to this release, so if those are important to you, you'll need to hang onto that disc.