Stanley Kubrick channels his inner Mickey Spillane in his second movie, Killer's Kiss, a pulpy film noir about a second-rate boxer who falls for a dance hall dame who's trapped in an abusive relationship with her boss. Brimming with style, but not much else, this brisk, often fascinating bargain-basement feature provides glimpses of the master Kubrick soon would become. Kino gives this curio the 4K UHD treatment, and a remastered transfer culled from a 4K scan of the original camera negative thrusts us into the thick of the action and gritty New York City locations. Solid audio and an astute commentary track heighten the appeal of this welcome release that belongs in every Kubrick collection. Highly Recommended.

The early works of master filmmakers often are mediocre at best, but watching the evolution of a Hitchcock, Spielberg, or Scorsese as they sow their cinematic oats can be captivating, enlightening, and rewarding. Spotting the seeds of greatness and seeing talent and artistry blossom inspire a sense of wonder and increase our admiration for these iconic industry titans. Like many of his fellow legends, Stanley Kubrick's apprenticeship was brief but fruitful, and his sophomore feature, a dazzling exhibition of raw, unrestrained style called Killer's Kiss, makes us sit up and take notice as it previews what an innovative and influential cinematic force he would become.

The 27-year-old wunderkind not only directed this down-and-dirty pulpy noir thriller, he also co-produced, shot, and edited it and concocted the flimsy story. A conglomeration of classic noir tropes, Killer's Kiss chronicles a tense three-day period in the life of second-rate boxer Davey Gordon (Jamie Smith), who falls in love with damsel-in-distress Gloria Price (Irene Kane), a dance hall girl (1950s euphemism for prostitute) who lives across his apartment courtyard in New York City. 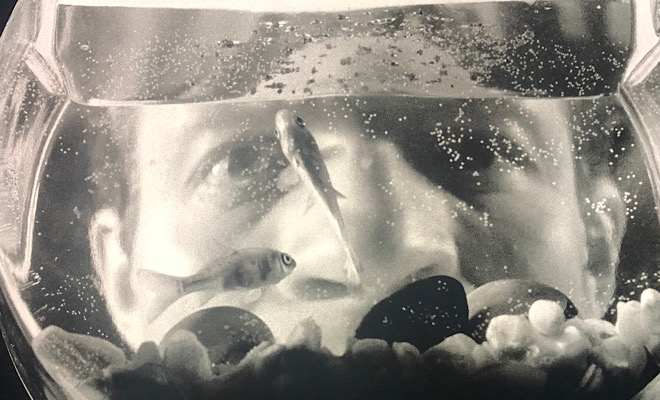 A sportscaster sums up Davey's career as “one long promise without fulfillment,” and after he loses a big bout to a brash up-and-comer, Davey feels beaten down not just by his opponent, but by the city itself. While licking his wounds at home later that night, he hears a scream and sees a man tussling with Gloria. Davey rushes to her aid, and as he and Gloria begin to bond, she reveals the brutish thug is Vinnie Rapallo (Frank Silvera), her boss and quasi-boyfriend. The next day, Davey decides to abandon the rough-and-tumble Big Apple and return to his kinder, gentler hometown of Seattle, and impulsively asks Gloria to join him. She accepts, but disentangling herself from Vinnie isn’t so easy, and her efforts to do so entangle Davey in a web of murder, deceit, and revenge.

With a measly budget of $75,000, Kubrick couldn't afford much of a crew, any big-name actors, or the fancy equipment required to photograph an elegant movie. When the sound man he hired couldn't keep the shadows of boom mikes out of the frame, Kubrick decided to dub in all the audio in post-production, just as he did on his first film, Fear and Desire. The lack of funds, though, works to the advantage of Killer’s Kiss, lending the 67-minute film a gritty, naturalistic look that mirrors the moral squalor threatening to engulf and destroy the characters. 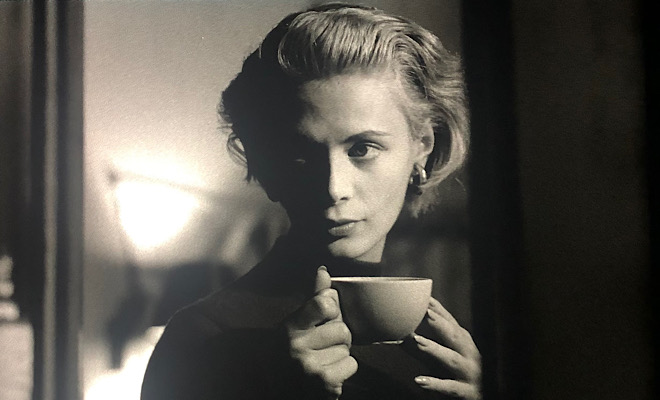 Kubrick’s technique may be unrefined and unfocused (you could call Killer's Kiss a student film on steroids), but it’s far more interesting than the story and characters. The use of negative film to depict a nightmare, myriad shots of mirrors and reflections, a dazzling fight sequence that surely inspired Martin Scorsese and rivals some of the in-your-face pummeling in Raging Bull (see clip below), and a wild-and-crazy climactic showdown in a mannequin factory that calls to mind the funhouse finale in The Lady from Shanghai all add visual spice, but the movie’s most compelling aspect just might be the dynamite location shooting in New York City, much of which was done on the fly without permits using a primitive handheld camera. Kubrick's brilliant juxtaposition of the blazing marquees, packed sidewalks, and traffic of Times Square with desolate, seedy alleys, tenement rooftops and fire escapes, and the grungy, clattering subway allows us to feel the city's pulse and revel in its raw, organic atmosphere.

The acting is as amateurish as the script, but the lack of polish adds to the film's semi-documentary feel. Despite his inexperience, Smith makes a strapping noir hero, mixing wounded pride with a sullen toughness and smoldering sexuality (other than Charlton Heston, I can't recall another actor so willing to brandish his hairy chest), while Silvera, who also led the Fear and Desire cast and would appear in countless films and TV shows over the next couple of decades, plays the ruthless villain with relish. The svelte, elegant Kane resembles a pencil-thin Inger Stevens, but the movie's flirtation with voyeurism also makes us think of Grace Kelly in Hitchcock's Rear Window, released the previous year. Sadly, Kane was unavailable to loop her dialogue, making it difficult to gauge the quality of her performance. Would she have recited her lines with more conviction than the actress who ended up recording them? We'll never know, but I have to believe the answer is yes.

Killer's Kiss is far from a great film and only a so-so noir. If it didn't have Kubrick's name on it, we probably wouldn't be talking about it today, yet when viewed within the context of the Kubrick oeuvre, it provides an endlessly fascinating glimpse into the director's artistic development. Forget the plot. Just absorb the visuals and marvel at the talent that in a few short years would produce Paths of Glory, Spartacus, Lolita, and Dr. Strangelove. Killer's Kiss may be messy, uneven, and raw, but it's also the prologue to a brilliant and enduring career. 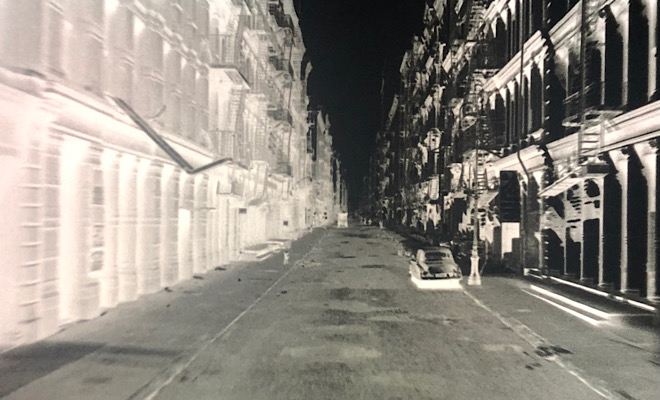 Vital Disc Stats: The 4K Ultra HD Blu-ray
Killer's Kiss arrives on 4K UHD packaged in a standard case inside a sleeve. Video codec is 2160p/HEVC H.265 with Dolby Vision HDR and audio is DTS-HD Master Audio 2.0 mono. Once the disc is inserted into the player, the static menu with music immediately pops up; no previews or promos precede it.

Killer's Kiss just might hold the distinction of being the first film with a budget of $75,000 or less to get a 4K UHD release, but don’t let the price tag fool you. This 2160p/HEVC H.265 transfer with Dolby Vision HDR, which was struck from a 4K scan of the original camera negative, makes Kubrick’s sophomore feature look like a million bucks. Incredibly film-like and brimming with fine details, the crystal-clear image thrusts us into New York's gritty concrete jungle. The boisterous Time Square atmosphere, garbage-strewn alleys and streets, and dingy interiors all seethe with life. Grain is very evident, but it’s also very organic, never exuding any annoying digital noise. The texture may not appeal to some viewers, but it heightens the movie’s realistic feel and sense of danger and unease.

Rich blacks, bright whites, and an excellent grayscale produce a balanced, pleasing picture that’s accented by superb contrast and breathtaking shadow delineation. Kubrick employs reflections to great effect throughout - in mirrors, windows, glossy marble, and on almost any shiny surface - and whether they’re faint or bold, they’re always crisp, as is a striking negative tracking shot down a city street during a brief dream sequence. Close-ups are sharp as well, highlighting facial scars and blemishes, sweat, Davey’s chest hair, and Vinnie’s oily mustache. Just a couple of errant nicks and marks dot the otherwise pristine source material, and no digital anomalies disrupt the mood.

Killer’s Kiss may not have a glamorous pedigree, but Kino’s impressive 4K UHD presentation elevates this early Kubrick curio to the highest possible level.

The DTS-HD Master Audio 2.0 mono track supplies robust sound that's completely devoid of any age-related hiss, pops, or crackle. Due to the film's shoestring budget and a conflict with the sound outfit Kubrick hired to record Killer's Kiss, all the dialogue and effects were looped in post-production. I didn't know this when I sat down to watch the movie, but began to suspect it early on. A distinct detached quality distinguishes the sound, which exudes more fidelity and depth of tone than other independent pictures of the period. The dialogue doesn't always sync up and at times can be a bit difficult to comprehend (Irene Kane was either unavailable or unwilling to do the looping, so another actress supplies her voice), but the effects are quite crisp, most likely because they were carefully manufactured later. The myriad train station noises over the opening credits, footsteps crunching on asphalt, running water, the boisterous boxing crowd, the Times Square traffic, fisticuffs, and screams all exude a pleasing vitality, and a wide dynamic scale handles all the highs and lows of the jazzy music score without any distortion. Though this track always will be somewhat problematic, I can't imagine it ever sounding any better than it does here.

A couple of extras are included on the disc.

There are better film noirs and better Stanley Kubrick movies, but Killer’s Kiss remains a fascinating specimen that provides a glimpse of the vision, innovation, and artistry that would later define one of cinema’s greatest directors. Brisk, rough, and stylish, Killer’s Kiss may lack a soul, but thanks to Kino’s top-notch 4K UHD presentation, it looks and sounds great, and makes a marvelous addition to any cinephile’s Kubrick collection. Highly Recommended.