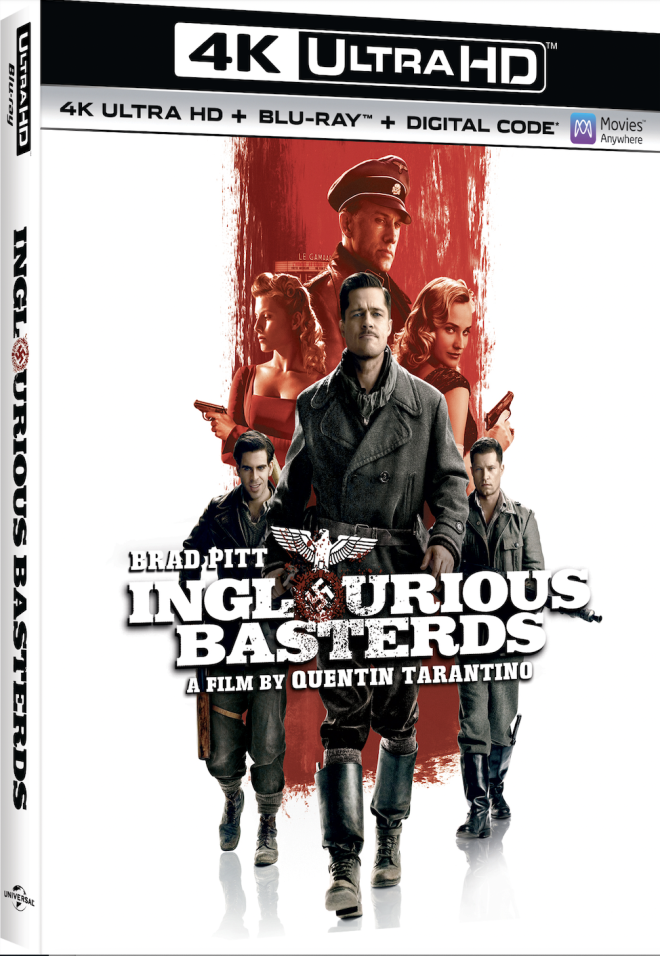 Unfortunately, not a lot of technical information was included in the press release. So we don't know if this is getting a Dolby Vision pass, or an Atmos upgrade or anything of the like. We've reached out for clarification so as soon as we know we'll pass that info along.

We do know it's coming packed with bonus features and the current planned release date of October 12th. As of now we haven't seen any hint of any retailer exclusives or SteelBook options yet, but we'll keep our eyes peeled and let you know ASAP.

BRING HOME THE STAR-STUDDED, ACTION-PACKED WAR THRILLER IN ULTRA HIGH DEFINITION QUALITY, AS IT WAS MEANT TO BE SEEN

Inglourious Basterds. As war rages in Europe, a Nazi-scalping squad of American soldiers, known to their enemy as "The Basterds," is on a daring mission to take down the leaders of the Third Reich.

⦁ The Making of Nation’s Pride

⦁ A Conversation with Rod Taylor

Inglourious Basterds will be available on 4K, Blu-ray™ and Digital.

⦁ Blu-ray™ unleashes the power of your HDTV and is the best way to watch movies at home, featuring 6X the picture resolution of DVD, exclusive extras and theater-quality surround sound.

⦁ The Movies Anywhere Digital App simplifies and enhances the digital movie collection and viewing experience by allowing consumers to access their favorite digital movies in one place when purchased or redeemed through participating digital retailers. Consumers can also redeem digital copy codes found in eligible Blu-rayTM and DVD disc packages from participating studios and stream or download them through Movies Anywhere.  Movies Anywhere is available only in the United States.