"I bring you these Fifteen...CRASH... Ten!! Ten Commandments!"

Quite timely after a literal plague hit the planet - the 1956 epic The Ten Commandments starring Charlton Heston and Yule Brynner comes to 4K UHD Blu-ray on March 30th, 2021 for the first time featuring a Native 4K transfer with Dolby Vision HDR! This three-disc set features the film on one single BD-100 4K UHD disc, with 2 BD-50 discs offering the film in 1080p SDR and extra bonus features.

Unfortunately, this set does not appear to include all of the bonus features of the DigiBook set that came out last year which were carried over from the 2011 set. The biggest omission would be the original 1923 version of the film. Specs may not be 100% finalized so that and some of the other bonus content could make its way to the set before street date, but just in case, don't go trading in that older release just yet. 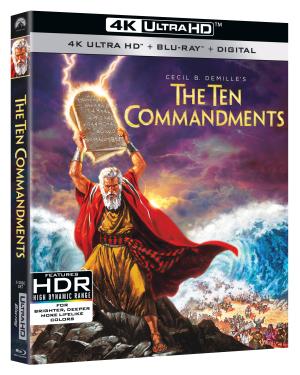 The Ten Commandments - so far - is only up for Pre-Order at Target, but we anticipate Amazon and Best Buy to add it soon now that it's been officially announced.

Check out the full press release from Paramount:

Bringing to life the inspiring story of Moses in all its stunning glory, THE TEN COMMANDMENTS has withstood the test of time.  To commemorate the film’s 65th anniversary in 2021, DeMille’s groundbreaking cinematic triumph will be available to watch at home in time for Easter in sparkling 4K Ultra HD with High Dynamic Range.

As part of the restoration done in 2010, the film was scanned in 6K and those files were the basis for this brand-new Dolby Vision version, which shows off the full beauty of the original VistaVision negative. The VistaVision format used special cameras to feed 35mm film into the camera horizontally in order to capture a wider image spread over two 35mm film frames, giving VistaVision twice the resolution of regular 35mm film.  In addition, Paramount spent well over 150 hours doing new color work and clean-up on the scan.  The move to Dolby Vision created the opportunity to further improve the look of the film:  blacks are enhanced and improvements were made to smooth out special effects mattes to create the most vibrant and pristine image possible.

The 4K film presentation contains an introduction by DeMille, an intermission, an overture/exit music card, and an entr’acte card, along with a DTS-HD 5.1 lossless soundtrack.

The new set includes a 4K Ultra HD disc, two Blu-ray discs, and access to a Digital copy of the film.  Following is a breakdown of the disc contents:

·       Theatrical trailers, including at 10-minute “making of” trailer

For sheer pageantry and spectacle, few motion pictures can claim to equal the splendor of THE TEN COMMANDMENTS. DeMille’s last motion picture made Charlton Heston a superstar and remains an unprecedented achievement and perennial fan favorite.  Filmed in Egypt and the Sinai with one of the biggest sets ever constructed for a motion picture, THE TEN COMMANDMENTS tells the story of the life of Moses (Heston).  Once favored in the Pharaoh's (Yul Brynner) household, Moses turned his back on a privileged life to lead his people to freedom.