It may be a year late, but the 1956 version of The Ten Commandments at last arrives on 4K UHD, and the crystal clarity, impeccable contrast, and eye-popping color of its glorious Dolby Vision/HDR10 transfer make director Cecil B. DeMille's gargantuan epic more immersive and lovelier to look at than ever before. If you're looking for upgraded audio, new extras, and the 1923 silent version, you won't find them here, but the ultra high-def video is so sublime, it's easy to forgive the omissions. Devotees of this inspirational blockbuster shouldn't hesitate to grab this 4K UHD release that dazzles the senses and stirs the soul. Highly Recommended.

A year ago, I began my review of a brand new digibook edition of The Ten Commandments with these words: "When Paramount decided to re-release The Ten Commandments in a digibook edition just in time for Easter, little did the studio know Cecil B. DeMille's classic Biblical epic might also provide some much-needed comfort for a nation struggling to deal with an unexpected health crisis of monumental and frightening proportions." And sadly, little did I know such a statement would still ring true a very long 12 months later as we celebrate the long-awaited debut of The Ten Commandments in the 4K UHD format. COVID continues to impact our lives, and though the future seems brighter, we still have a long way to go before we permanently emerge from its massive shadow.

The Ten Commandments certainly won't cure our ills, but as I wrote in March of 2020, "The inspirational story of Moses (famously played with strength and stoicism by Charlton Heston), who heroically fights to free an enslaved people and shows boundless courage and unshakable conviction in the face of oppression, persecution, and a devastating and insidious pestilence, never ceases to lift our collective spirits and renew our faith in humanity. And in this moment of fear and uncertainty, it's especially reassuring." And so it remains today. 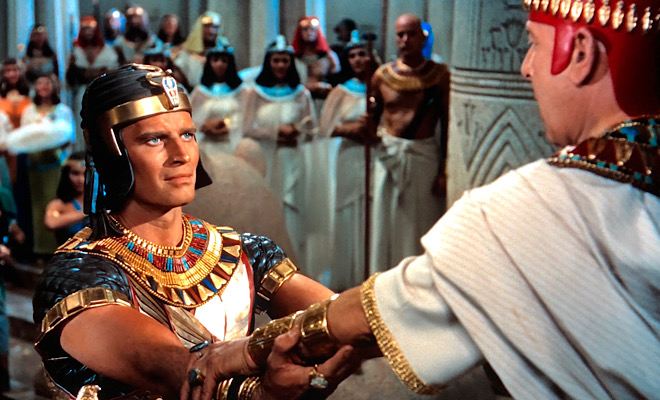 "Say what you will about DeMille's treatment of this stirring and uplifting tale. Impressive, Oscar-winning special effects and sumptuous production values aside, the film flaunts a bombastic tone, features an array of shamelessly hammy performances, and frequently flirts with camp. It's classy one moment and cheesy the next. It dwells on trivial matters and zips through important, meaningful events. The stodgy, stilted script and DeMille's heavy-handed direction weigh the picture down and slow its pace. Somehow, though, the overall magnitude of this elephantine production eclipses such deficiencies and inspires a sense of admiration and respect, if not for the film itself, then for the story it tells and the vital themes of perseverance, courage, solidarity, faith, love, and selflessness it so sincerely espouses.

"Though not as dazzling or emotionally affecting as Ben-Hur, The Ten Commandments remains a monumental cinematic achievement and one of Hollywood's most iconic and beloved epics...For many, The Ten Commandments is an Easter tradition, but this year," and again in 2021, "DeMille's film resonates more strongly, and its sober yet hopeful message might provide some consolation during these tough, uncertain times." 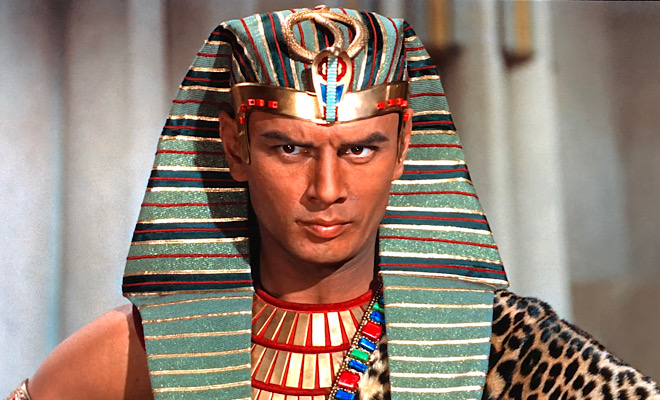 And it certainly resonates more strongly in the splendor of Dolby Vision and HDR10. It's been a decade since we've gotten a new transfer of The Ten Commandments and high time this blockbuster received the 4K UHD treatment. Last year, I bemoaned the missed opportunity of releasing DeMille's signature film in the Ultra High-Def format, and though it's a shame so many fans purchased the 2020 digibook when this edition already must have been in the pipeline, its belated arrival is no less welcome. In years past, I might have tried to be clever and called the 4K release of The Ten Commandments a gift from God. This year, though, there are so many more vital gifts we'd rather receive instead.

For a more in-depth look at The Ten Commandments, check out my colleague Aaron Peck's review of the 2011 limited edition gift set. 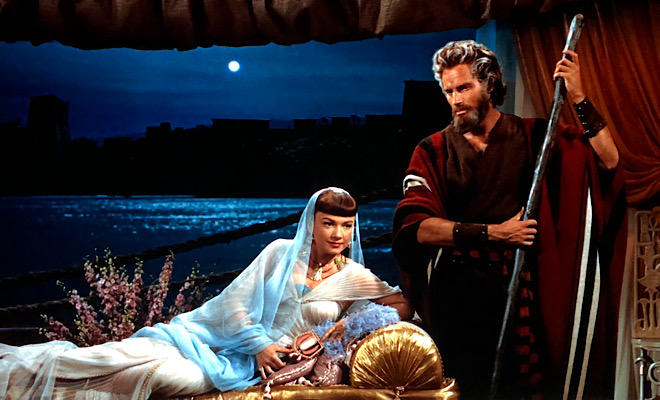 The 4K UHD edition of The Ten Commandments arrives packaged in a standard clear case inside a glossy sleeve. The 4K UHD disc features a 2160p/HEVC H.265 encode in both Dolby Vision and HDR10, while a 1080p/AVC MPEG-4 version of the film is spread across the two included Blu-ray discs. A leaflet containing a code to access the digital copy is tucked inside the front cover of the case. Once the disc is inserted into the player, the full-motion menu with music immediately pops up; no previews or promos precede it.

The previous 1080p Blu-ray transfer of The Ten Commandments, which is included in this edition, is quite impressive (for a complete review of it, click here), but this 2160p/HEVC H.265 encode, which is struck from the same 2010 restoration, improves upon it just enough to make this 4K UHD release worthy of an upgrade. At first glance, the wow factor seems to be lacking, but upon closer examination and especially when compared head-to-head with the standard Blu-ray, the enhancements become easier to discern and appreciate. A more vivid picture, deeper and more varied color (especially with Dolby Vision engaged), and better integrated special effects are the most palpable improvements in this Dolby Vision/HDR10 presentation.

According to the press release accompanying the disc, "As part of the restoration done in 2010, the film was scanned in 6K and those files were the basis for this brand-new Dolby Vision version...Paramount spent well over 150 hours doing new color work and clean-up on the scan. The move to Dolby Vision created the opportunity to further improve the look of the film: blacks are enhanced and improvements were made to smooth out special effects mattes..." Of course, when your source material is the original VistaVision negative, you've got a leg up in the process. (Most film buffs would term VistaVision the high definition of the 1950s, and I certainly would not dispute that assessment.) Marrying VistaVision with Dolby Vision is a match made in movie heaven, and this transfer of The Ten Commandments showcases the attributes and maximizes the impact of both processes.

Faint grain preserves the film-like feel, but never compromises the crystalline clarity that enhances depth and helps even the finest details pop. The sandstone carvings, etched writing on the tablets, dancing torch flames, kernels of hail, shimmering seas, and all the individual faces in the cast-of-thousands crowd scenes are remarkably sharp, and combining that increased vibrancy with the greater color spectrum of Dolby Vision creates an arresting image, especially during the movie's effects-laden second half. The deep red sky at the climax, blood red water, orange firebombs, azure blue skies and water, peach-tinged sunsets, gray-speckled stones, and dusty desert landscape all look stunningly gorgeous, as do the turquoise, coral, and gold bejeweled bibs worn by the Egyptian royalty. Baxter's gold and silver lamé gowns sparkle and all the costume textures (especially the rough-hewn slave attire) are crisply rendered. 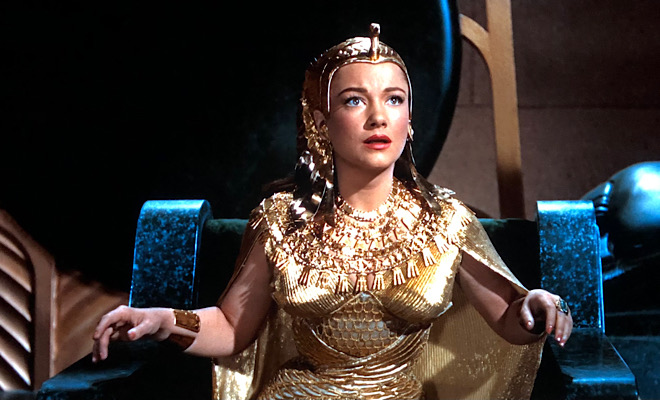 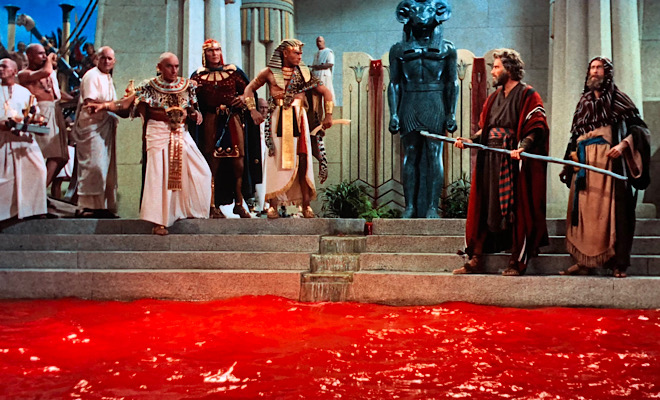 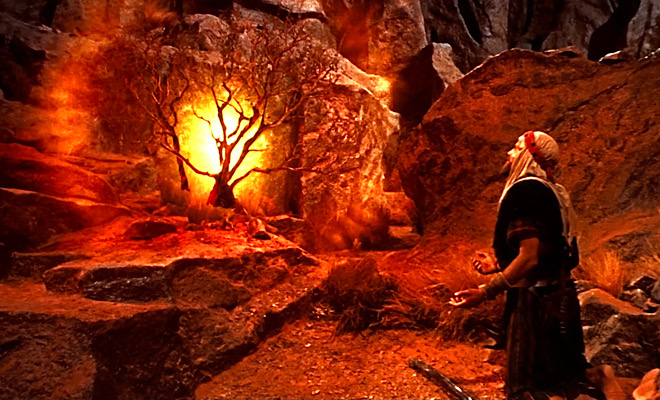 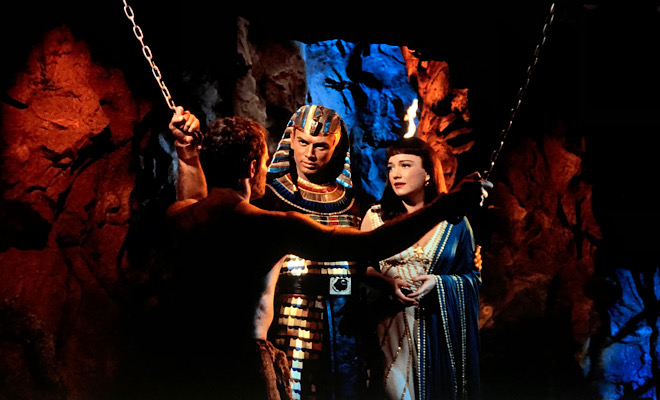 Lustrously rich blacks anchor the image, superb shadow delineation keeps crush at bay, and a breathtaking long-shot silhouette of camels crossing the desert makes an indelible impression. Whites are bright and resist blooming, the varying flesh tones - from alabaster and ruddy to olive and ebony - look natural and remain stable throughout, and all the razor-sharp close-ups showcase facial pores and hair, glistening sweat, and gritty grime. No nicks, marks, or scratches dot the pristine source, and no digital anomalies distract from the on-screen spectacle.

As advertised, this new transfer kicks the special effects up a notch, significantly smoothing out the rough edges of the processed shots and seamlessly integrating the animated fireballs and flame bolts. The staffs morphing into serpents look every bit as magical as they do to the agape characters, and while the parting of the Red Sea will never look realistic, the sequence feels far less cheesy here than it has in previous home video versions. Yes, some black outlines remain, but they appear less noticeable and the figures in the frame no longer resemble Colorforms pasted on a matte background. The pics below illustrate the improvements... 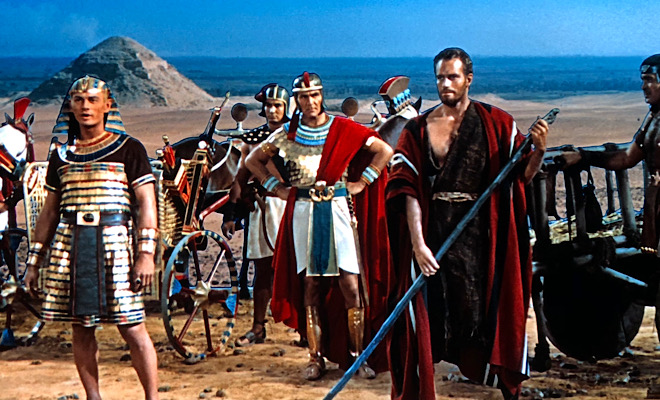 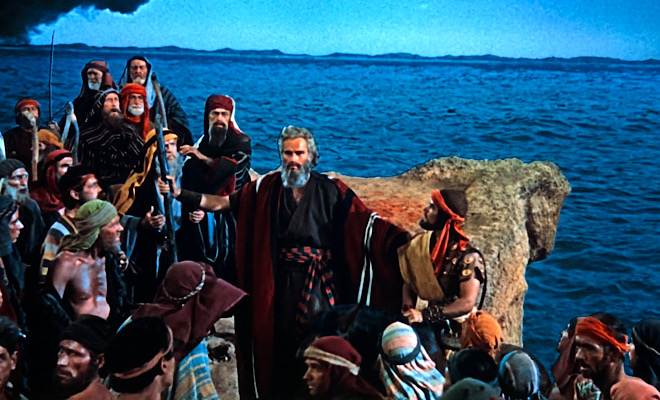 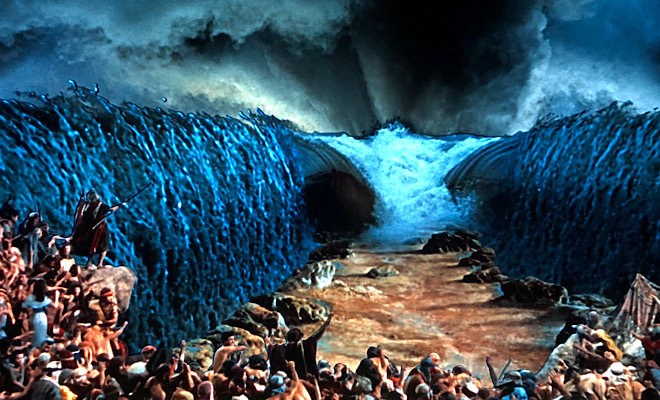 If you're a devotee of this monumental and inspiring epic, an upgrade is whole-heartedly recommended. I also hope this top-notch effort will spur Paramount to release more of its classic catalogue in 4K UHD. So many fans would be so grateful.

The DTS-HD Master Audio 5.1 track is the same one used for the 2020 digibook edition and 2011 limited edition gift set Blu-ray releases. While some scenes certainly would benefit from an Atmos mix, sadly one is not included. For a full review of the disc's audio quality, click here.

All the supplements pertaining to DeMille's 1956 version of The Ten Commandments have been ported over to this 4K UHD release. The commentary track is housed on both the 4K UHD and Blu-ray discs, but the newsreel footage and trailers are exclusive to the Blu-rays.

Sadly, the one element that's missing in this set that's been included on previous home video editions of the film is DeMille's original 1923 silent production and all the extras associated with it. So before you discard any previous release of The Ten Commandments, make sure you rescue that disc.

For a review of the audio commentary, newsreel footage, and trailers included on previous editions, click here.

The Ten Commandments at last comes to 4K UHD and boy, is it worth the wait! A spectacular Dolby Vision/HDR10 transfer featuring crystal clarity, impeccable contrast, and eye-popping color not only demands an upgrade, it also renders every other home video release of director Cecil B. DeMille's mammoth cast-of-thousands epic obsolete. The audio and extras may be the same as other editions and Paramount sadly omits DeMille's original 1923 silent version, but the video is so vivid and vibrant it's easy to forgive such missteps. The Ten Commandments is Hollywood entertainment at its bombastic best, and this 4K UHD release helps this larger-than-life blockbuster loom larger than ever before. Highly Recommended.