Loosely based on the novel of the same name, Joe Dante's The Howling remains a terrifically entertaining blend of horror, tongue-in-cheek humor and shocking special makeup effects. Imported from the UK, StudioCanal celebrates the 40th Anniversary of Dante's cult horror classic on Ultra HD with a gorgeous Dolby Vision HDR presentation that takes a gnarly bite out of its HD predecessors. The 4K transfer is also joined by a satisfying pair of lossless tracks, some familiar supplements mixed with a few welcomed surprises, postcards and a poster. The three-disc UHD Collector's Edition makes for a Highly Recommended addition to the 4K library.

Before being held captive inside a Ford Pinto by a crazed rabid dog, Dee Wallace was taken hostage by a ravenous, cult-like pack of maniacal werewolves in Joe Dante's cult-favorite The Howling. What starts as a week-long treatment of relaxation with her husband (Christopher Stone) after Wallace's Karen White's brutal attack inside an adult video store, quickly spirals into a nightmare of dark conspiracies, scary sex by the campfire, and the menacing howls of wolves. The creature feature is a cleverly deceiving and sly flick that seamlessly blends shock-horror special effects and an eerily ethereal atmosphere with a wicked, snickering sense of humor. One of the production's best aspects is how quickly it jumps into high gear right from the start and plunges audiences into the dark underbelly of society, namely the dark alleys and streets of Los Angeles where apparently Roger Corman, Forrest J. Ackerman, and grandma's corpse from the original Texas Chainsaw Massacre make sudden cameo appearances.

At the resort, the creepy, strangely oddball behavior of "The Colony" is also immediate within the first night, from Marsha Quist's (Elisabeth Brooks) sultry advances towards Karen's husband to her therapist Dr. Waggner (Patrick Macnee) and a wonderful character-actor John Carradine as the suicidal old kook Erle. Loosely inspired by Gary Brandner's novel of the same name, John Sayles' script takes a witty self-aware approach to the material, carrying an air of melodrama with a healthy dose of mystery and dialogue that takes shrewd jabs at itself. Smartly, Sayles, who also makes an appearance as a morgue attendant, leaves plenty of room for Dante to expand on this and throws in several tongue-in-cheek gags, similar to his Piranha and Gremlins. Littered with various wolf-related allusions throughout, the bizarre and warped sense of humor is further boosted by the amazing special makeup effects artistry of Rob Bottin (The Thing, Total Recall), working from notes and ideas developed by the legendary Rick Baker.

By and large, the most memorable aspect of The Howling is the transformation sequence when Karen confronts a ghost from her past, which remains just as amusingly startling and hilariously shocking as ever. Forty years later, Joe Dante's cult horror classic continues to be a howling good time, delivering a great balance of comedy and entertaining horror. 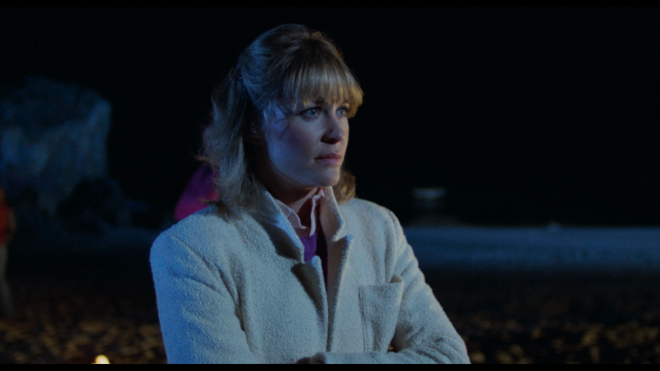 For a more in-depth take on the film, check out our review of Scream Factory's 2013 Collector's Edition Blu-ray HERE. Imported from the United Kingdom, StudioCanal celebrates the 40th Anniversary of Joe Dante's The Howling on 4K Ultra HD Blu-ray as a three-disc Collector's Edition box set. Housed inside a nice gatefold digipak with plastic trays and images from the film beneath each disc, a Region Free, triple-layered UHD100 disc sits comfortably opposite a pair of other discs: a Region B, BD50 copy of the film and a dual-layered DVD-9 copy of the documentary The Frankenstein Complex containing more supplements. They are joined by a folded poster with new artwork, a set of five production photo postcards and a 20-page booklet featuring a note from Joe Dante about the restoration, an exhaustive history on the production, cast & crew biographies and original press kit material. All the goodies come inside a sturdy, side-sliding cardboard slipcover featuring the same red artwork as the poster. At startup, the disc goes straight to an animated menu screen with music playing in the background and the usual options along the bottom. The Joe Dante horror favorite takes a gnarly bite out of Ultra HD, and the results are to die for, sure to leave fans of the previous Scream Factory Blu-ray watering at the mouth in favor of this Studio Canal release.

The HEVC H.265 encode comes from a brand-new restoration and remaster of the original 35mm camera negatives, which was reportedly supervised and approved by the director. The elements still show their age with several poorly-resolved moments sprinkled throughout, but they are nonetheless in relatively great condition. Also, worth noting, the picture falls on the softer side of things, but this is true to John Hora's photography and the heavy use of diffusers, meant to give the story a creepy and ethereal atmosphere. Nevertheless, the video enjoys a notable uptick in overall definition and clarity, revealing every hair in the creatures, every line in the surrounding foliage, every imperfection in the wood cabins and every thread in the clothing.

The 4K transfer also benefits greatly from the very subtle, nuanced application of HDR, showing an excellent balance in the contrast that lightly brightens much of the action and boosts the whites to great effect. The improved specular highlights allow for a dramatically vivid but still crisp, narrow glow from the various light fixtures, generating better visibility of the background information, in the lightbulbs and within the plumes of fire. Occasionally, brightness levels can seem iffy and fall slightly below expectations, making the picture suddenly feel a bit flat, but all in all, blacks are richer and truer than their HD SDR counterpart while shadow details remain strong and legible within the darkest corners of the frame. Awash in a consistently thin layer of natural grain, the 1.85:1 image has an attractive film-like quality that fans will appreciate.

Thanks to the wider color gamut, this UHD edition reveals a surprisingly colorful and vibrant production, giving the forty-year-old film a new lease on life. Looking more rejuvenated and regenerated, the Dolby Vision HDR presentation lavishes the visuals in bold, lively greens and energetic, spirited blues that display a great deal of variation in both nighttime and daylight sequences. Showing a more dramatic improvement is the dynamic, sumptuous array of reds throughout, from the candy-rose tones in some articles of clothing and the ruby shades of lipstick to the dark crimson of the blood. At the same time, secondary hues are richly saturated and animated, furnishing several interior scenes in a warm yellow tint or the night exteriors in a deep, fiery orange glow of the fire. Facial complexions have a lifelike peach-rosy tone to them while revealing the pores, smallest wrinkle and negligible blemish during close-ups, making for a beautiful 4K video to a horror favorite.
(Dolby Vision HDR Video Rating: 82/100) 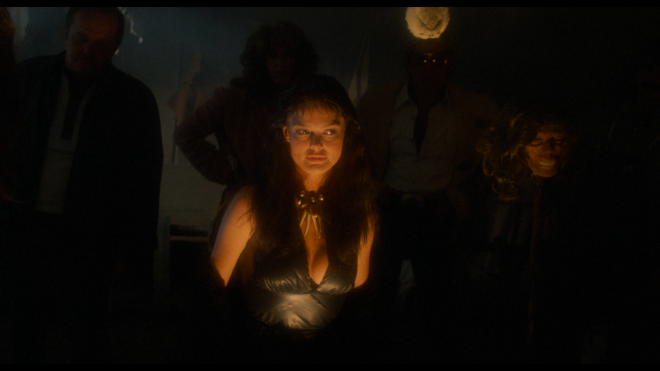 The werewolf classic howls at home theaters with a pair of lossless English audio options, neither of which, honestly, sounds much different or better than their predecessors. Between the uncompressed PCM 2.0 soundtrack and the DTS-HD Master Audio 5.1 upmix, I was pleasantly surprised to find myself enjoying the latter a great deal more than the former, but in either case, the two tracks are an excellent complementary addition to the visuals. Exhibiting a clean and well-defined mid-range with appreciable acoustical details throughout, the front-heavy presentation feels broad and spacious with impressively good channel separation and several great discrete off-screen effects. Some of those atmospherics convincingly extend into the surrounds, generating an engagingly satisfying soundfield, particularly during the moments of high-pitched howling. Pino Donaggio's displays excellent distinction and fidelity within the orchestration, and the vocals are precise and well-prioritized throughout. The low end is accurate and appropriate for providing the action with a bit of weight and some hefty depth to Donaggio's original score. (Audio Rating: 80/100) 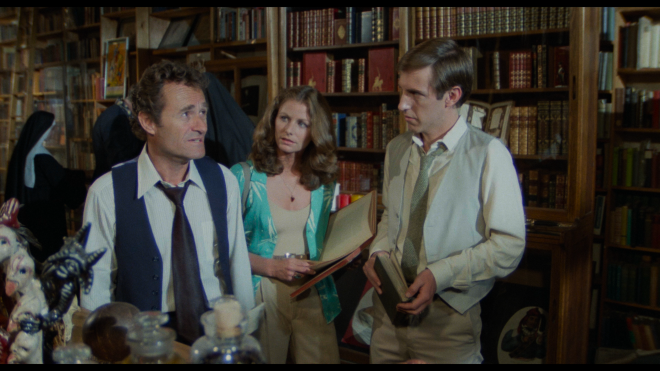 For this UHD three-disc box set, Studio Canal ports over some familiar material and mixes in one new surprise, all of which can also be found on the accompanying Blu-ray disc. The package also includes a DVD documentary to satiate the most ravenous fans. 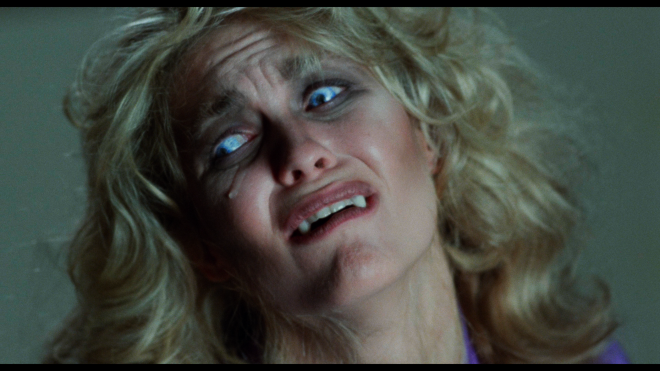 Loosely based on the novel of the same name by Gary Brandner, The Howling continues to entertain four decades later with its clever blend of horror, tongue-in-cheek humor and shocking special makeup effects. Starring Elliott's mom as a reporter caught in a nightmare about a pack of mainstreaming werewolves, Joe Dante's film, from a John Sayles script, is a memorable and highly amusing cult horror classic.

In Europe, StudioCanal celebrates the 40th Anniversary of Dante's werewolf favorite on 4K Ultra HD with a gorgeous Dolby Vision HDR presentation that delivers a massive improvement over its HD SDR predecessors. The transfer is also joined by a satisfying DTS-HD MA 5.1 soundtrack and some familiar supplements mixed with a few welcomed surprises, like an awesome 2015 documentary on a separate disc. The three-disc UHD Collector's Edition also includes postcards and a poster, making this box set a Highly Recommended import for loyal, pack-loving fans that will look great in the 4K collection.