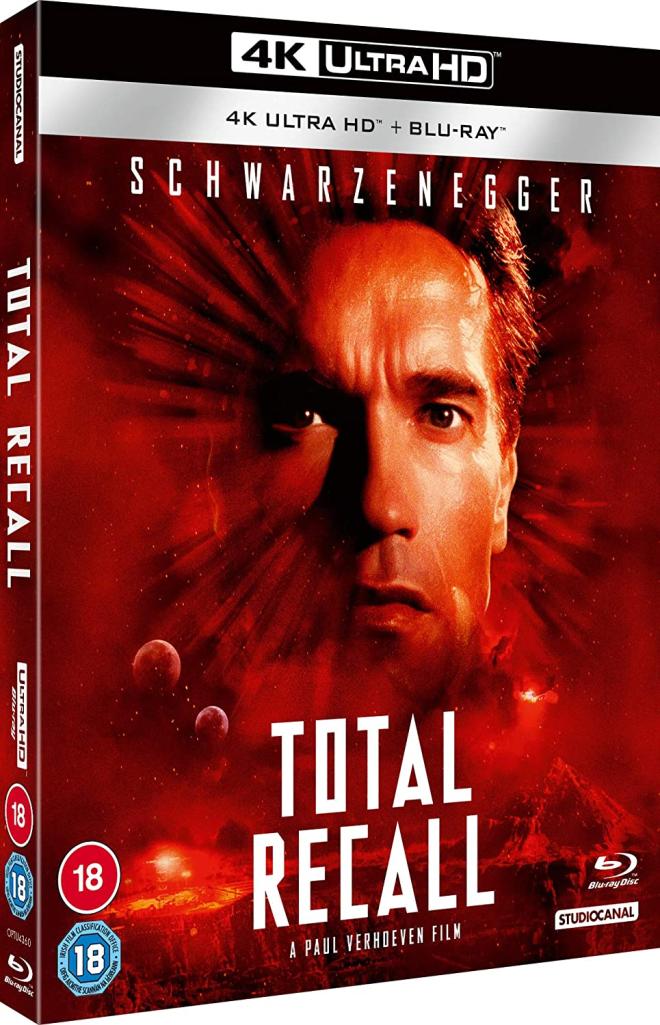 An excerpt from my recent review of the movie:

"Aside from the nostalgic fondness, the script by Dan O'Bannon and Ronald Shusett, the same pair that penned another sci-fi classic in Alien, also landed with some highly intriguing concepts. Most fascinating are a class struggle theme and secret desires for a meaningful life cleverly underscoring the violent mayhem moving the plot. Quaid is a regular Joe suddenly growing apathetic at the monotony in his bourgeoisie existence, possibly feeling it's all just an illusion. Arguably, the visit to Rekall, a company that implants fake memories, accidentally makes him conscious of this illusion. Investigating its origins reveals the manipulation of a major corporation by the wealthy elitist Cohaagen (Ronny Cox). He wields his power to suppress the lower class by controlling the basic essentials for a decent life, like oxygen, all of which is represented by the mutants of Mars, a lovely David Cronenberg contribution. In Quaid's fantasy for creating purpose out of the mundane, he is the ultimate working-class hero, defeating those who profit from the lives and material labor of others.

"I can keep going on and on and on about this highly entertaining sci-fi actioner, the type moviegoers like to call a "thinking man's action movie." There's a great deal more happening in Paul Verhoeven's Total Recall, and I can spend hours picking the whole thing apart. My favorite aspect still remains never knowing if it actually happened or if it's all part of Quaid's vacation fantasy. The bright light at the very end could mean something really did go wrong, and he's just been lobotomized. Or, Quaid did indeed get his money's worth by living the most realistic dream of his life, bringing up larger philosophical questions on the dilemma of appearance vs. reality. I could go on, but I'll just stop for now and instead watch Total Recall again because honestly, it's more fun to allow the mind to enjoy the journey through Quaid's possibly deluded fantasy of heroism, which coincidently plays out like an action spy thriller."

After watching Total Recall yet again for the n'teenth time, I simply love all the many different layers we can enjoy in this wonderful piece of cinema. To add to that last line in the previous paragraph, and we continue down that rabbit hole of the story being in our hero's deluded fantasy, Quaid models himself after the fictional heroes of blockbuster actioners where bullets conveniently miss him, but he seems to mow down goons without fail. He is also able to walk away from fights with barely scratch, even when confronted by knives or a monstrous vehicle designed for crushing rocks and digging underground tunnels.

Then, there is also Ray Baker's sleazy salesperson Bob McClane at Rekall literally spelling out the entirety of the film's plot like . . . Well, like the plot of a big action film. So, with the character fashioning himself after action stars, who better to play him than the biggest action star, which then, can serve as a sly critique on itself as well as other action movies. This, too, works as a subtle commentary on a willing audience paying to not only ride along in this fantasy but also pay for the opportunity for Schwarnegger's Quaid to be the audience's surrogate of those same repressed fantasies and desires for a more meaningful life.

For a more in-depth take on the film, check out our review of Lionsgate's 4K Ultra HD edition.

Imported from the United Kingdom, StudioCanal celebrates the 30th Anniversary of Paul Verhoeven's Total Recall on 4K Ultra HD Blu-ray as a five-disc Collector's Edition box set. A Region Free, triple-layered UHD100 disc sits comfortably opposite a pair of Region B locked Blu-rays: a BD50 disc copy of the film and a BD25 disc containing more supplements. They are joined by pair of CD soundtracks with Jerry Goldsmith's official film score on the first disc while the second disc features alternate takes and various source cues. At startup, the disc goes straight to an animated menu screen with music playing in the background and the usual options along the bottom.

All five discs are housed inside a nice gatefold plastic tray with images from the film beneath each disc. Also inside, the tray contains a folded, double-sided poster with new artwork, measuring approximately 16"x22," a set of six production photos postcards and a 48-page booklet featuring an except from an essay by author Kim Newman, various production notes, cast & crew biographies and a CD tracklisting. The package of goodies comes inside a sturdy, side-sliding cardboard slipcover showing an image of Schwarzenegger in deep crimson red. 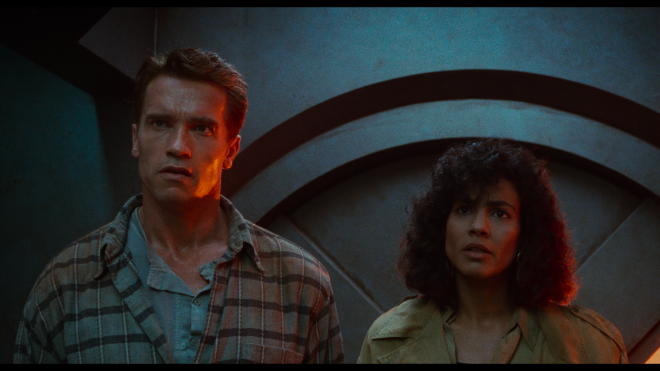 This is the same identical HEVC H.265 encode as the 4K Ultra HD edition in the U.S. by Lionsgate, so I'll simply repeat what I wrote for that release:

"Verhoeven's classic implants [...] on Ultra HD with by far the best video presentation the film has ever enjoyed on any format. Coming from a brand-new 4K restoration and remastering of the original 35mm camera negatives, [...] the HEVC H.265 encode is a massive improvement, making it the definitive way for savoring this Schwarzenegger favorite.

"Admittedly, the movie has never been much a looker and probably never will, so expectations should be reasonably softened in order to enjoy the many positives. With a consistent ultra-fine layer of grain present and coming in noticeably thicker in a few darker sequences, the native 4K transfer delivers an attractive film-like quality. From the individual hairs of the cast and the fine stitching of the clothing to the architectural design of each set and the rocky environment of Mars, overall definition is incredibly sharp and detailed, exposing every nook and cranny. It does, however, come with its fair share of softer and poorly-resolved moments, which stand out all the more given how good the rest of the movie looks. But to be honest, this seems likely inherent to the negative and due to the rough, gritty cinematography, making the results faithful to its source. [Sadly, there are also a couple instances of visible macroblocking at around the 43-minute mark when the spaceship lands on Mars. It is fairly mild and easy to miss even on a big screen, but it nonetheless is there with two or three frames looking the most severe, which again, are only apparent when pausing on that specific moment.]

"Arguably, the most impressive upgrade over its Blu-ray counterparts is the richer, more full-bodied blacks throughout, providing the 1.85:1 image with better dimensionality and a winning cinematic appeal sure to please long-time, loyal fans everywhere. Whether it's Melina's and Benny's dark hair or Richter's outfit or the deep ebony shadows of the Martian tunnels, visibility of the finer details in the clothing and the background is excellent. Going back to the deliberate photography of Jost Vacano and Verhoeven creating a dystopic, lifeless and morose future, contrast balance is largely kept in check and somewhat muted for the most part. However, the video nonetheless has a bit more pop and is comfortably bright with cleaner, more brilliant whites in the various light fixtures. Specular highlights offer the more notable improvement, as the hottest spots appear crisper, narrower yet more radiant without ruining the finer aspects or the blooming suffered in previous releases.

"Likewise, the Dolby Vision HDR presentation also lands with an improved array of colors, especially the reds ranging from the candy rose pop of neon lights and various shades of lipstick to the ruby scarlet of blood and the deep, crimson cherry glow of Mars. Remaining true to the filmmaker's creative aesthetic, the teal-orange palette is made all the more apparent in this UHD edition, particularly well-lit interiors constantly bathed in turquoise, sapphire tint, adding to the thematic dreary atmosphere. Meanwhile, Melina's outfit pops a vivid, buttery yellow, Venusville comes with lively splashes of royal purples and spirited lavender, and many articles of clothing are a rich, cotton-candy pink. Compared to previous releases, facial complexions are another notable upgrade, looking significantly healthier with a rosy-peach tone in the entire cast while also remaining highly revealing with lifelike textures in close-ups." 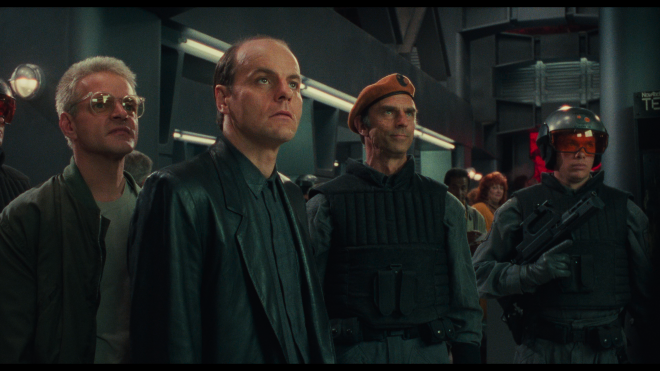 As with the video, the Dolby Atmos track is also identical, and here are my thoughts on that:

"Continuing with the upgrades is an excellent and highly-satisfying Dolby Atmos soundtrack that makes the high-rez tracks of previous Blu-ray releases a distant memory. It may not be the sort for putting one's system to the test, but this object-based option surprisingly feels fuller and more energetic than ever before without also seeming exaggerated or needlessly inflated.

"Largely remaining true to its original design, much of the action is a front-heavy presentation with fluid movement of background activity across the three channels and into the top heights, creating a convincingly broad and spacious half-dome soundstage. While delivering crystal-clear dialogue at all times, imaging comes with a great deal of presence and fidelity, exhibiting outstanding, room-penetrating acoustical details, giving each gunshot and explosion striking clarity without the slightest hint of distortion. Jerry Goldsmith's memorable score benefits most thanks to the extra breathing room, providing the visuals with a wonderfully robust feel while maintaining superb fidelity and accuracy in the instrumentation.

"The surrounds and ceiling channels are, for the most, silent and non-existent, save for Goldsmith's music lightly bleeding all around and creating a pleasing, enveloping soundfield. Occasionally, minor effects subtly travel into the top heights and sides, but not to any notable or convincing extent. However, combined with an appropriately responsive and hearty low-end, the Atmos mix sounds terrific, providing a long-time action favorite with a wider and fullers sense of presence that audiophiles will love." 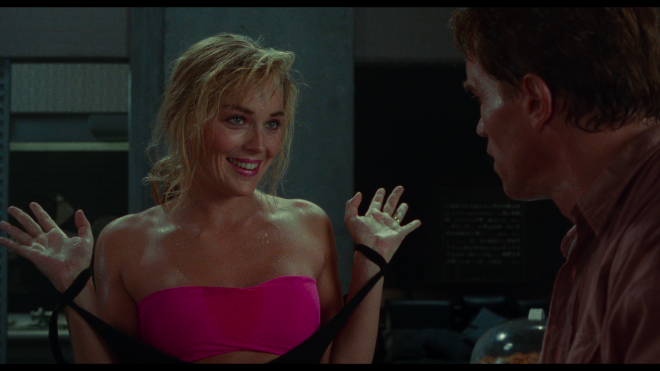 StudioCanal ups the ante for collectors with this Ultra HD edition of the film. The five-disc box set not only arrives with several goodies, like a pair of audio CDs, but they also throw in a trio of new supplements on the UHD disc while the two Blu-ray discs pack some familiar bonuses. 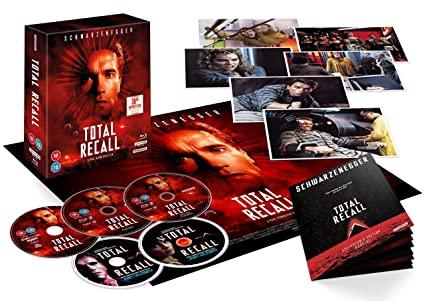 Aside from the nostalgia and the action-packed excitement, Paul Verhoeven's Total Recall is the sort of sci-fi spectacular some affectionately refer to as a "thinking man's action movie." With Arnold Schwarzenegger as the working-class everyman Doug Quaid, the movie has its place in cinema history and offers its audience something to think about while enjoying the ride through another man's heroic fantasies. In Europe, StudioCanal celebrates the 30th Anniversary of Verhoeven's sci-fi cult classic on 4K Ultra HD with an impressive Dolby Vision HDR presentation that delivers a satisfying improvement over its HD SDR predecessors. The 4K transfer is also joined by a highly engaging Dolby Atmos soundtrack and some familiar supplements mixed with a few welcomed surprises. The five-disc UHD Collector's Edition also includes a pair of audio CDs, postcards and a poster, making this box set a highly recommended import for hardened action fans and it will look great in the 4K collection.