While a flop upon first release - John Carpenter’s The Thing quickly gained cult status as one of the scariest horror/sci-fi films ever made. The chilling isolating location and a terrific cast headlined by Kurt Russell, Keith David, and Wilford Brimley make for a palpable potboiler thriller. Universal Studios Home Video delivers fans of Carpenter’s classic a 4K Ultra HD Blu-ray release featuring an excellent native 4K transfer with HDR10 and a new engaging DTS:X mix and a fine selection of legacy bonus features to match. After numerous releases, this is truly the best we’ve seen or heard The Thing on home video - Highly Recommended.

"What were they doing that low shooting at a dog, at us?"

After two men in a Norwegian helicopter flew into their camp trying to kill a single dog, the crew of a U.S. Antarctic research station encounters something from beyond the stars. An alien creature capable of infecting and perfectly imitating any living breathing organism. With any number of their team infected by the creature, helicopter pilot MacReady (Kurt Russell) and the survivors of the station must find a way of identifying and killing each imitation before it’s too late.

We’ve covered John Carpenter’s The Thing a few different times before now, so I encourage you to take a look at our reviews from 2008, the Collector's Edition from 2016, and for what drove a bit of controversy, our article in The Bonus View comparing the Scream Factory Collector’s Edition against Arrow’s release in 2017. 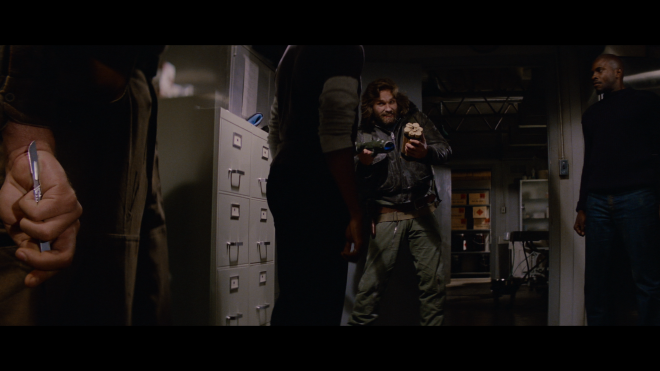 For my book, John Carpenter’s The Thing is essentially a perfect film. Combining science fiction and horror, Carpenter and his co-screenwriter the late Bill Lancaster struck a terrifying tone with the film. Rather than a straight remake of Howard Hawks’s classic The Thing from Another World starring James Arness as a blood-thirsty alien vegetable - Carpenter and Lancaster took more inspiration from John Campbell’s original chilling short story Who Goes There - if you haven’t read it add it to your list, it’s great! The scenarios are very similar, but these are two drastically different beasts. Both films are amazing in their own ways but stand apart enough that it’s pointless to compare them. 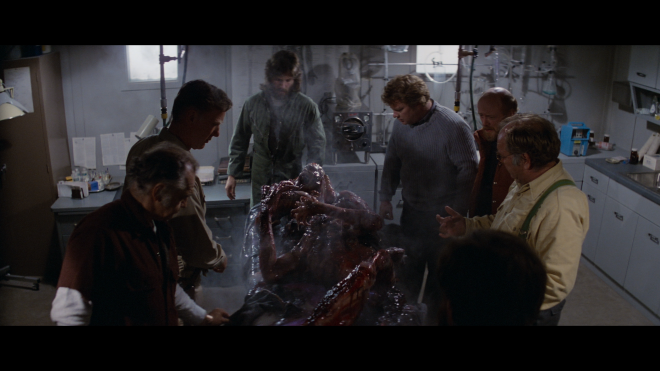 The reason why John Carpenter’s The Thing works so well is its nihilistic approach to the material. This is a dour and heavy film with only a few smattering moments of levity to ever so slightly break the tension. The vast majority of the time, you’re stuck in it waiting for the thing to be revealed. And just when you think you’ve got it figured out - it turns out to be someone completely different… and then another someone is revealed! Like the characters, you’re trapped in this constant state of distrust fearing the person standing right next to you. While in recent years Carpenter has tried to dispel any mystery to the ambiguous ending, the film works best when it’s not trying to give any answers. Leave the mystery hanging, that’s what makes the film terrifying.

The prequel The Thing tried to replicate this lightning in a bottle of tension, fear, and horror. While there are some clever moments to that film, it’s ultimately unsatisfying and unnecessary. Now, Blumhouse is apparently in the hunt to adapt John Campbell’s previously lost full-novel manuscript of the story originally titled Frozen Hell. In the right hands, this could be an interesting take on the story. It’s certainly material worth revisiting, but there’s got to be something unique about it to make it worth the time. I always thought an early 1930's period film with limited technology would be the best way to go. The last thing we need is another useless tired retread. Even if that’s all we get, nothing can take away from John Carpenter’s 1982 classic - or the badass 2002 video game.

Vital Disc Stats: The 4K Ultra Blu-ray
John Carpenter’s The Thing infects its first 4K Ultra HD Blu-ray release thanks to Universal Home Video in a two-disc 4K UHD + Blu-ray + Digital set. Pressed on a BD-100 disc, the discs are housed in a standard sturdy two-disc case. The included SDR Blu-ray is the exact same disc from 2008 without any updates in audio. The 4K disc loads to Universal’s standard static-image main menu with an animated bonus features menu along the righthand side.
A 4K Ultra HD Blu-ray SteelBook is also available 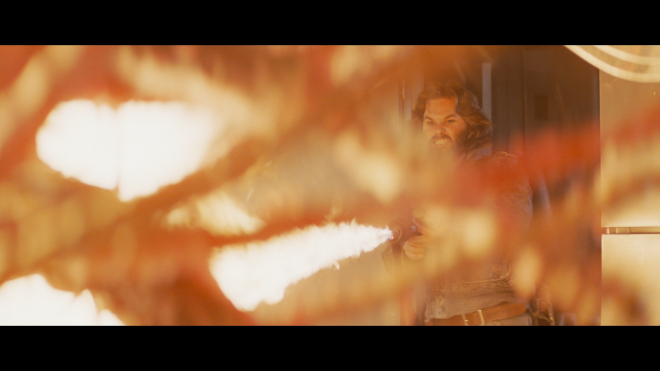 John Carpenter’s The Thing arrives on 4K Ultra HD Blu-ray with an excellent native 4K transfer with HDR10 grading. This is a film with a very passionate fanbase who needs to own this in every new and hopefully better version possible. I’m one of those, and with that devotion comes some heated discussion about benefits and detriments to any release. While few would argue that the 2008 disc lands anywhere near the top, the discussion between Scream Factory’s 2016 release and Arrow’s 2017 release certainly was tense, to say the least. Every release of this film has had some plusses and minuses often drawing some hard lines with fans.

The good news is this new 2160p 2.35:1 transfer offers up a fair and welcome middle-ground between the 2016 and 2017 releases. With a natural film grain texture, there are impressive fine point details in clothing, facial features, and set design work. I’ve seen this film countless times over the last 25 years or so and I felt like I was seeing small things I’d never noticed before. As mentioned, film grain is apparent but well-resolved without ever appearing too noisy, nor is there any sign of waxy DNR or other compression artifacts. Soft shots that have always looked soft - well, guess what, they’re still soft. That’s just the way they are. But close-ups and middles shots look terrific, the gnarly autopsy sequences are still grotesquely beautiful offering up even more fine detail in the fleshy bits. You can really fully appreciate all of the incredible Rob Bottin special effects. 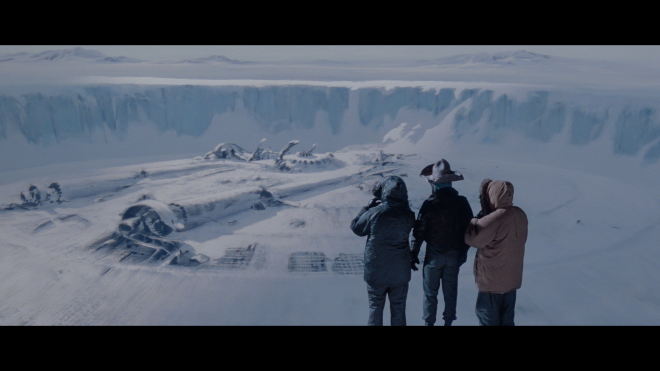 With HDR10, colors come to life nicely offering splendid primaries - blues and reds are a particular highlight. The overall tone of the film is a stop or two darker, but that’s a greater benefit to the black levels, contrast, and overall color timing. The Norwegian helicopter is a fine example of a coppery brown - it’s ranged everything from deep dark almost black to light tan/brown. Likewise, the main blue tones of the film strike a balance between the 2016 Scream Factory Collectors Edition sourced from the interpositive which could look almost too blue versus the 2017 edition from Arrow that was too bright while also popping more red into the mix.

Black levels are nice and inky giving the image a notable sense of depth and dimension at all times. Contrast is well resolved to allow for those bright snowy whites without blooming or whitening out finer details. Film elements are in excellent shape without signs of age-related issues or any visible wear and tear. 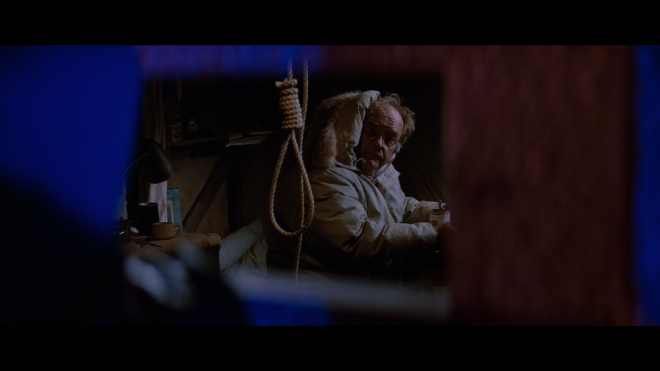 No doubt, there will be another 4K Ultra HD Blu-ray release of this film down the line - maybe with Dolby Vision or HDR10+ and we’ll have to reassess the whole thing again. But for now, this is genuinely an excellent presentation. We got an early preview of what this disc could be when digital streaming services like VUDU and iTunes upgraded to 4K HDR, but this disc offers much better black level balance without the troublesome bitrate caps those services push their product through. 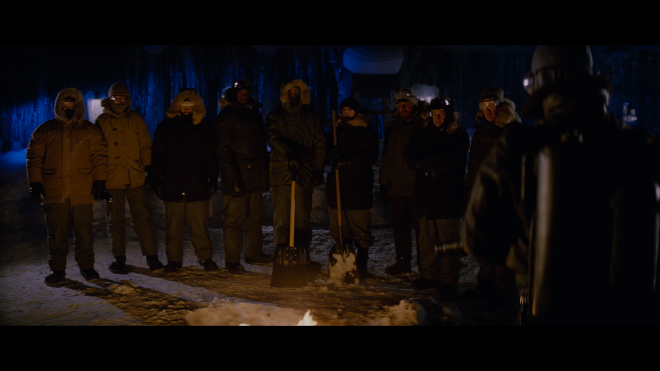 This new release of The Thing arrives with a nicely engaging DTS:X audio mix. While the full surround treatment doesn’t always come alive - there are still some quiet front-loaded scenes - the majority is active giving some impressive pinpoint object placement. The most notable effect is the rotors of the helicopters sitting nicely in the height channels while the chop coming off the blades kicks the side channels. But even in quieter conversational moments, I felt like there was more height and atmospheric effects than before. The way voices echoed around the rec room, or even when the dog is stalking down the hallway while Nauls rocks out to Stevie Wonder’s Superstition, I felt like there were more active side effects than the previous DTS-HD MA 5.1 mix or the 4.1 mix of the arrow release. When the big creature attack sequences hit, there’s a ton of great activity motivating some impressive surround effects throughout the channels.

Dialog is clean and clear throughout without any issues. If anything they actually resonate a little stronger than some of the past releases. Ennio Morricone’s score also punches the fronts a little stronger with the creepy bass-pulsing sounds moving through the channels nicely. All in all, this is a pretty solid audio upgrade that works to the benefit of the film’s subdued natural creepy tones. It may not be the most dynamic track ever, but when it's great it's really effective and atmospheric. 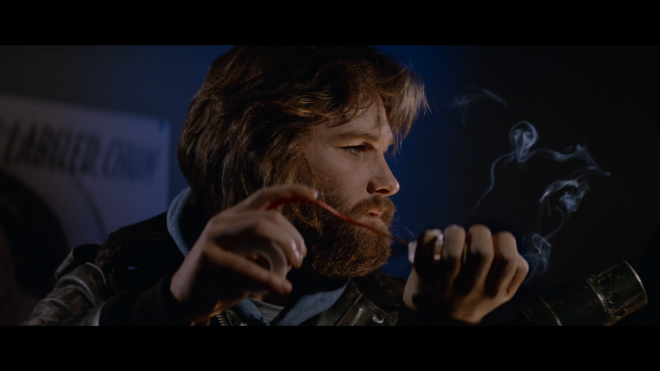 The Good News/Bad News of this release is there’s nothing new in the soup for bonus features. Everything that’s here was previously available at one time or another. The plus side of this compared to the old 2008 Blu-ray is you don’t have to use that stupid U-Control PiP function to watch the bonus features! If you’ve never seen these or heard that great audio commentary before, it’s well worth picking through everything here. Unfortunately, you don’t pick up some of the great bonuses found on the Scream Factory disc or the Arrow Collector’s Edition - so if you’re a hound for all of the bonus features, best keep your previous releases. 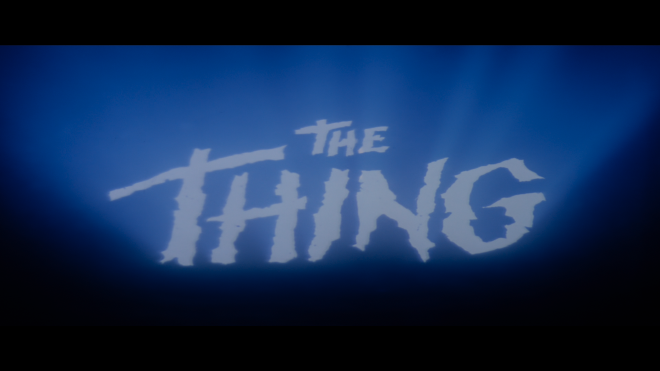 John Carpenter’s The Thing is a pure classic sci-fi horror flick. 1982 was a stacked year for science fiction classics. And while like Blade Runner it flopped hard at the box office, home video has been kind to this film ensuring it remains in the cultural lexicon. Now with a new 4K Ultra HD Blu-ray release from Universal, fans have another reason to add this terrifying creepfest to their collection. The new native 4K transfer with HDR10 gives the film a revitalized detailed appearance with a nicely active DTS:X mix to match. Bonus features are slim, but the audio commentary is an essential listen. Not that you needed any motivation to add this to your collection, but buy with confidence that it’s worth the upgrade - Highly Recommended