Joe Dante's Gremlins is a horror-comedy of pure awesomeness that continues to deliver the scares and laughs with festive cheer. Celebrating its 35th Anniversary, the cult classic wreaks havoc on Ultra HD with a gorgeous 4K HDR10 presentation, a DTS-HD Master Audio soundtrack but the same bonus material from the 2009 Blu-ray. Nevertheless, this UHD edition is a Recommended upgrade, making a worthy addition to the library.

Oh, those adorable, undeniably cute mogwais of Gremlins with their sweet, little smiles and how they roll their eyes at you. Who wouldn't want one in their house and record those lovable furballs for hours as they play toy trumpets, hum to their heart's content and model a Santa hat.

On the other hand, these same charmingly sweet critters come with a hidden dark side — like so many other things in life, right? One only needs to follow and abide by a certain set of rules so as to avoid unleashing a destructive evil upon the world: Don't feed them after midnight, don't let them come in contact with water and don't expose them to bright lights, especially sunlight. And most importantly for the audience, don't bother puzzling over the logic of these rules, like the question of time zones, the fact that beer contains water or point out that Billy (Zach Galligan) doesn't buy UV-protection curtains. Besides, imposing real-world logic to Chris Columbus's script is missing the point of this modern-day allegory entirely. And really, the rules are more like guidelines anyhow.

When breaking any of these rules, the thing that was once viewed as harmless, innocent and even good since the cuddly creature brings joy and a sense of security to a middle-class home can suddenly turn detrimental, heartlessly vicious and catastrophic. Living up to their species names — mogwai essentially translates to an evil sprite — the soft furballs transform into rough, reptilian gremlins, mischievously savage imps representing rampant, unchecked laissez-faire economics, like a physical metaphor for the cold-hearted callousness of Mrs. Deagle (Polly Holliday).

Feed the critter more than it needs, it develops an insatiable, greedy hunger that's never satisfied, and water only exacerbates things by multiplying and growing, like water to a plant. Mr. Futterman (Dick Miller), who blames them for killing the American manufacturing industry, falls victim to the little monsters, and Kate (Phoebe Cates), who has to work two jobs to make ends meet, is forced to cater to their every whim and only be of service to them instead of herself. Meanwhile, Billy's dad (Hoyt Axton) is a would-be inventor and aspiring entrepreneur, a hardworking and ambitious father who still believes in the ever-elusive American dream and also happens to be who introduces the mogwai into the home and names it Gizmo. Expose the truth of the creature's inherent, hidden evil to the sunlight, it dissolves and dies. 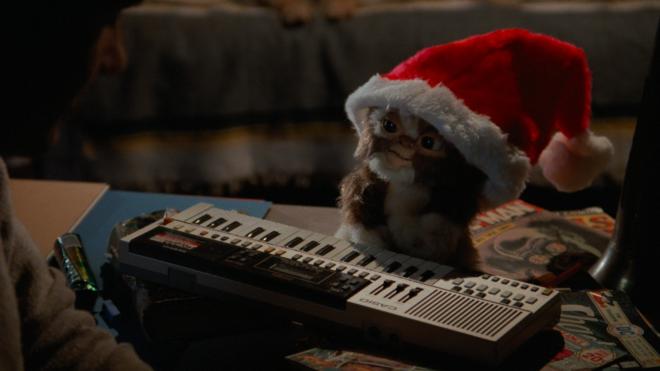 Warner Home Video brings Joe Dante's Gremlins to Ultra HD Blu-ray as a two-disc combo pack with a flyer for a Digital Copy. When redeeming said code via WB.com and Movies Anywhere, it includes a 4K UHD version with Dolby Vision and Dolby Digital Plus 5.1 audio. The triple-layered UHD100 disc sits comfortably opposite a Region Free, BD50 disc, and both are housed inside a black, eco-cutout case with a shiny, glossy slipcover. At startup, viewers are taken to a generic static screen with the usual options along the bottom and music playing in the background. 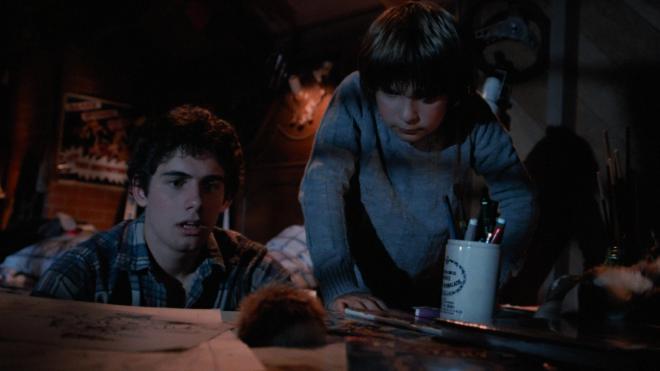 Joe Dante's cult classic wreaks havoc on Ultra HD with an exceptionally beautiful HEVC H.265 encode, delivering a marked improvement over previous Blu-ray predecessors and making this the best the movie has ever looked on any home video format.

To celebrate the 35th Anniversary of this horror-comedy favorite, Warner Bros. reportedly remastered the original 35mm camera negatives into a new 4K digital intermediate, from which this encode was sourced. The brand-new transfer showcases sharper lines and visibility of the minute features and particulars of the Peltzer household, exposing every funky, wacky gadget, trinket and invention decorating the background. The individual hairs of people, the mogwai and Spike's white mohawk are distinct, and the little imperfections of buildings are plainly visible while the reptilian bodies of gremlins reveal every lump, nodule and scar. The faces of the cast show detailed wrinkles, pores and negligible blemishes with lifelike textures. A couple moments slightly dip in resolution quality, but that's due to the age and condition of the source. Showered in a thin layer of natural grain, the presentation is ultimately beautiful and very film-like with significantly better definition and clarity overall.

The 4K video also boasts improved contrast and brightness, allowing for better visibility in the distance and within the darkest corners of the frame, and for a story mostly set a night, this is greatly appreciated. Granted, the movie now appears darker than its Blu-ray brethren, but it's nothing too egregious to complain about. Black levels are inkier and truer with silky, stygian shadows that penetrate deep into the screen, providing the 1.78:1 image (slightly cropped from its 1.85:1 OAR) with notable dimensionality and a cinematic appeal. Meanwhile, the whites in clothing, the snow and various objects are cleaner with a more brilliant pop. Specular highlights likewise radiate with a bit more intensity, giving light fixtures a resplendently crisper and narrower glow, better exposing the finer details in the faces and within the brightest, hottest spots while supplying metallic surfaces with a more realistic polish.

Being one of the best Christmas movies ever, the HDR10 presentation gives John Hora's vibrant cinematography a new lease on life, boasting a richer, wider array of color throughout. Primaries, in particular, bathe every scene in candy rose reds, energetic cobalt blues and bubbly, spirited greens, ironically furnishing the naughty, destructive horror with a merry, festive ambiance. The upgrade in the secondary hues is admittedly subtler and more nuanced, but the slight difference over its HD SDR counterpart is nonetheless noteworthy. Whether from the fireplace or the lighting in Dorry's Tavern, several scenes come with a warmer and more vibrant reddish-orange blush, but the Futterman house has a weightier, more solemn yellow glow, which oddly suits Mr. Futterman's grumpy attitude. Also, flesh tones appear more natural and healthy with welcomed rosiness around the cheeks, making a fantastic presentation. (HDR10 Video Rating: 88/100) 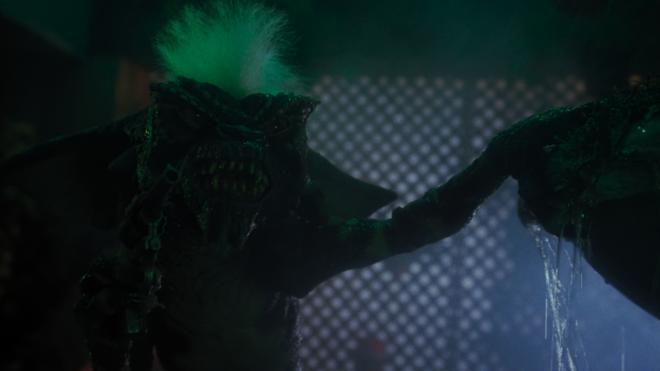 For all intents and purposes, this remains the same satisfyingly enjoyable lossless mix, littered with lots of background activity nicely balanced across the entire soundstage. A broad and spacious imaging exhibits a superbly clean and extensive mid-range even in the loudest segments, maintaining excellent detailed clarity in the higher frequencies with precise, well-prioritized vocals. Although largely a front-heavy presentation, as it should be, the design lends itself splendidly when applying the receivers' Dolby Surround or DTS: Neural:X up-mixing functionality, subtly and effortlessly spreading several atmospherics into the surrounds while the music lightly bleeds into the top heights. The low-end feel a tad more fuller and responsive, providing the action and music with appreciable presence t.

For a more in-depth take on the audio quality, you can read our review of the standard Blu-ray HERE. (Audio Rating: 82/100) 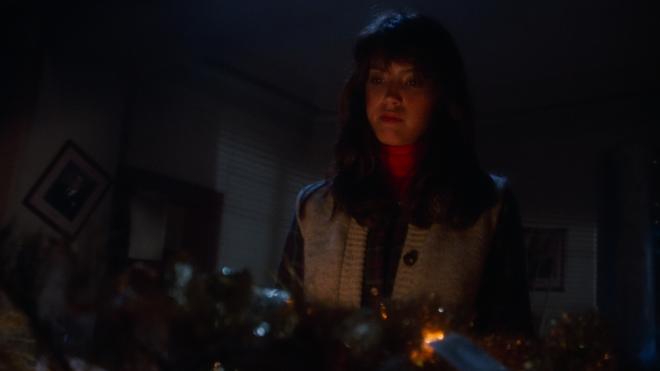 Warner Bros. celebrates the 35th Anniversary of Gremlins with the same set of supplements as the 2009 Blu-ray edition. 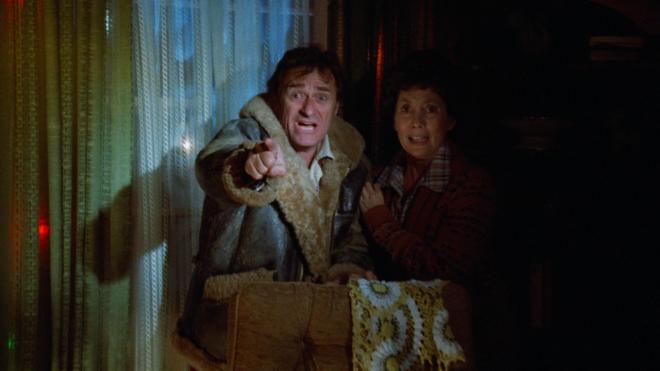 Ignoring the logic of the rules for proper mogwai maintenance and care, Gremlins is a horror-comedy of pure awesomeness and festive hilarity, one of those movies that made an impact on the childhood memories of many and continues to do so decades later. Joe Dante's cult classic celebrates its 35th Anniversary wreaking havoc on Ultra HD with a gorgeous 4K HDR10 presentation, delivering a marked improvement over its Blu-ray counterpart, but the DTS-HD Master Audio soundtrack is not all that much of a step up over the Dolby TrueHD version. The same bonus material from the 2009 Blu-ray is ported over, but this UHD edition is nonetheless a recommended upgrade just in time for the holiday season.