Bed-Stuy was already burning in a heatwave, but underlaying social grievances will boil over leaving the neighborhood changed forever. Spike Lee's Do The Right Thing is proving just how timeless it is as Universal Studios delivers the film to 4K UHD Blu-ray. With recent events throughout the country, this film is just as important and essential viewing as it was the day it shocked theaters thirty years ago. Universal Studios gives the Criterion Collection release a run for its money offering a truly splendid native 4K transfer with HDR10 and upgrades the audio with an effective, immersive DTS:X audio mix - on top of a host of excellent bonus features. Very Highly Recommended

From my review of the 2019 Criterion Blu-ray Release:

"It's going to be a hot one in New York with temperatures in the scorching 100s. In Brooklyn's small Bed-Stuy neighborhood, things are going to get even hotter. Mookie (Spike Lee) is out to get paid by his pizzeria boss Sal (Danny Aiello). Like every other day, Mookie gets caught in the squabbles of Sal's two sons Pino (John Turturro) and Vito (Richard Edson). Like every other day, Mookie scuttles up and down the block making deliveries bumping into colorful locals like Da Mayer (Ossie Davis), Mother Sister (Ruby Dee), the music-loving Radio (Bill Nunn), and Buggin (Giancarlo Esposito) all while local DJ Señor Love Daddy (Samuel L. Jackson) blasts the tunes. Unlike every other day, simmering gripes and festering prejudices will come to a boil." 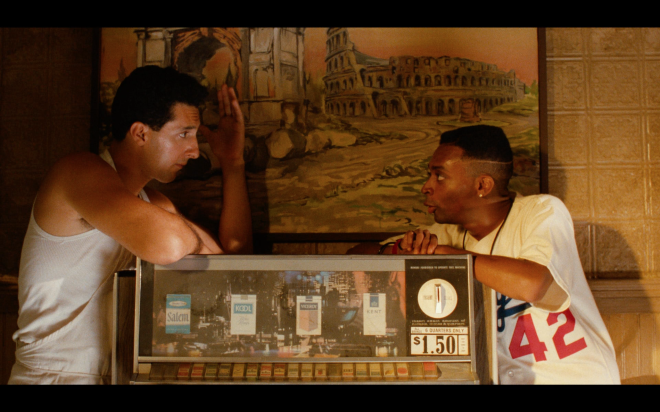 2020 was a bastard of a year for a wide variety of reasons. If a presidential election wasn't enough drama, we had a pandemic disrupting our day-to-day lives. More visceral and shocking were the events that lead to the death of George Floyd and several more people of color spurring civil unrest the likes of which the United States hadn't seen since the 1960s. Suddenly everyone was having this important and long-overdue conversation about race relations. Do The Right Thing needs to be a part of the conversations.

As a white male who grew up in a semi-affluent caucasian-dominate town, my first viewing of this particular Spike Lee Joint was eye-opening. While my school attempted to educate us about racism in America and Martin Luther King Jr. - at the same time, they actively taught that the Civil War was fought because of Northern economic pressure on Southern states with slavery being a near-complete afterthought. This is where movies made by a diverse slate of voices is so damn important. A movie like Do The Right Thing or even Boyz 'N the Hood should have been shown to my 8th grade Social Studies class. Instead when we needed to learn about other cultures or people we watched Glory or Dances With Wolves. Great movies and genuine classics in my opinion - but presented from a decidedly pasty point of view.

And here we are in 2021. 31 years after this film's theatrical release - Spike Lee's "day in the life" film is just as visceral and shocking and an important conversation starter. It's amazing watching this film and realizing that if this movie was made today, the only difference is people didn't have cell phones where video can instantly go viral. You still have people like Mookie doing everything he can to hustle and get paid. You still have people like Sal who think they're a benefactor to "these people." And sadly, there are still all too many Radio Raheem's out there.

If it's been a while since you've watched Do The Right Thing, give it another spin. If you've never watched this movie, it's time to mark the time, turn off the phone, and kick back to it. If you're at all like me never grew up in a world like Bed-Stuy you still won't come away from this film with a full "understanding" - but you'll at the very least come away with a sense of empathy, and that's something the world needs a lot more of right now.

Do The Right Thing lands on 4K from Universal Studios in a two-disc 4K UHD Blu-ray + Blu-ray with Digital copy sip. Pressed on a BD-100 disc, the discs are housed in a standard sturdy black 4K case with an identical slipcover. The 4K disc loads to a static image main menu with the bonus features panel along the right side of the screen. The included Blu-ray disc is the old Universal disc and hasn't been updated from the new restoration sourced for the Criterion disc and what was presumably used for this release. 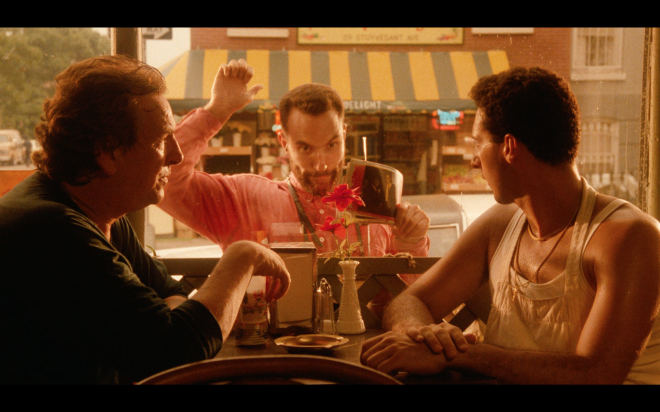 And here we are again faced with another 4K UHD Blu-ray release that puts fans in the quandary of feeling the need to make another purchase after the Criterion Collection issued an impressive release less than 2 years ago. From the bones of it, the source for this 2160p native 4K transfer is the same one used for Criterion's excellent Blu-ray - so know going in that the elements are in impeccable shape without issues there. After doing a lot of disc flipping, this 4K UHD release certainly offers a notable uptick in overall resolution. Film grain is a bit more apparent than the Criterion Blu-ray but it's not intrusive or overbearing, in fact, it offers a more nuanced cinematic quality. I felt like I was seeing finer details in faces, clothing, and scenery - like the patterned walls of Sal's Pizzeria, or the apartments and homes Mookie visits throughout the film. I also felt like the image had an improved sense of depth for a rich film-like presentation.

HDR10 certainly pops, but it may hit in odd ways to folks. Right from the get-go with Rosie Perez's stylized dance to Fight The Power opening credits - the colors push a bit more rusty red/orange. Flipping between discs, this coloring instantly noticeable. But not in a bad way - watching the primary colors of the names coming on the screen show natural yellows, blues, and reds. When the main film starts up, that reddish/orange quality remains but lends itself to that feeling of oppressive summer heat. When Mookie comes out of his apartment building, his Jackie Robinson jersey is still a nice crisp natural white so it's not like the film has been completely been pushed into the reds.

Black levels are a bit darker appearing than the Criterion disc - and certainly much more natural and balanced than the old 2009 disc. Crush is largely avoided. Contrast also gains some strength balancing a number of the hot white blooms that were prominent in previous releases. A key example here is when Spike Lee's Mookie gets into work and is shooting the shit with John Turturro's Pino. Previous disc releases - the 2009 and 2019 criterion disc both - had hot white blooms coming off Sal's car and the bright white sidewalks through the window. This 4K disc with HDR10, those blooms are pulled back and you can actually see more background details. Granted these details are out of focus and not altogether important, but it lends to the improved sense of depth I mentioned earlier. This film always had a very stylized color pallet and this transfer pushes those colors without altering them too dramatically. Skin tones and primaries are still healthy and natural. And since Spike Lee recorded a new introduction for this release I have to imagine he signed off on this presentation.

Apples to Oranges, if you're satisfied with Criterion's Blu-ray release, that's absolutely the best 1080p presentation available. If you don't already have that disc, or, just need to have the 4K, you'll be very happy with the results here. In a matchup against other 4K UHD Blu-ray releases of the late 80s early 90s, Do The Right Thing is a top tier example for the format. 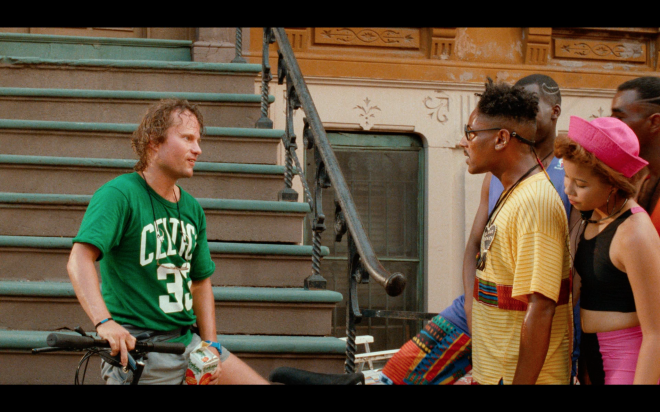 A native 4K transfer isn't the only improvement this disc has to offer - fans also get an impressively immersive DTS:X audio mix. While this track doesn't fundamentally alter the mix to account for the extra vertical spacing, it certainly feels more engaging. From the outset, the sounds of airplanes mixed over Fight The Power are pushed to the overheads but travels along the sides and rears for a very dramatic effect. When the main film gets going, the mix feels more open as Mookie walks along the neighborhood with a rich assortment of atmospherics and street noise peppered in. Even simple conversations pick up a boost. As I was disc flipping, I felt the need to raise the volume on the Criterion or 2009 disc's DTS-HD MA 5.1 mix as dialog didn't hit quite as hard. Subsequently, I felt the need to back things down for the DTS:X mix. Radio Raheem's boombox - and the film's excellent assortment of music - punches LFE impact nicely hitting those lovely low bass notes. The climax of the film is another notable improvement as the crowd gets louder and louder with distinct voice placement. For most of the film, this mix doesn't offer a massive dramatic difference over the perfectly good 5.1 mix, but there's enough here to give it the edge. There's enough in the subtleties to call it a worthwhile improvement.
(90/100) 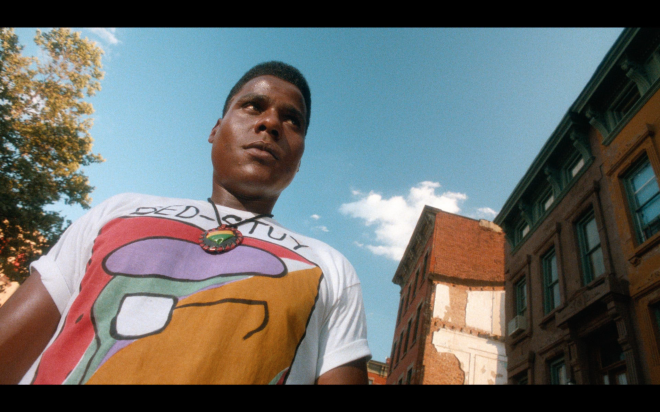 If you were on the fence at all about this new 4K release or picking up the Criterion edition - if you had to pick only one, this disc offers most of (and best of) the bonus features found with the Criterion release. Tipping the edge a bit you now get both the 20th Anniversary Edition audio commentary with Spike Lee as well as the archival commentary with Lee, Dickerson, Wynn Thomas, and Joie Lee - and they're both an essential listen. Lee's new introduction offers a bit of perspective to the film and its cultural significance. All of the rest of the bonus features are holdovers from past releases. You certainly don't get everything the Criterion release had to offer on this disc, but you get a healthy bulk of it.

I love Do The Right Thing. I feel it's Spike Lee's best film - in a long career of great material. This along with Boyz In the Hood are a cultural one-two punch that should be experienced. Especially by folks who don't live and breathe the world of these colorful characters found in Bed-Stuy. It's funny, it's heartfelt, and it's tragic. It's a visceral film that still hits hard today - maybe even harder after the events that passed throughout 2020 because it turns out 2020 wasn't actually unique in that regard. We just heard about it and actually saw the various events that transpired last year because they went viral.

This is an important film that benefits greatly from a new 4K UHD Blu-ray release. The image quality is superb, the new audio mix is immersive, and the on-disc bonus features are informative and represent the bulk of materials created for various releases of this film. If you're looking for an answer to the question of which release to own; the Criterion or the 4K disc - why not own both? It's worth the 20 bucks and half-inch of shelf space to have not only the best A/V presentation available but also all of the best bonus features and materials assembled to date. Very Highly Recommended.