The late John Singleton's Oscar-nominated Boyz n the Hood upgrades to 4K UHD Blu-ray. This story of friends living in and trying to survive in South Central L.A. is just as searingly poignant and often gut-wrenching today as it was in 1991. The performances are pitch-perfect and Sony gives this film a worthwhile upgrade. Featuring a native 4K HDR10 presentation with a new Dolby Atmos audio track, the film looks and sounds better than ever worthy of the upgrade. Highly Recommended.

"Any fool with a dick can make a baby, but only a real man can raise his children."

Sony previously released Boyz n the Hood on Blu-ray in 2011. Take a look at our coverage of that disc for a great review of the film. 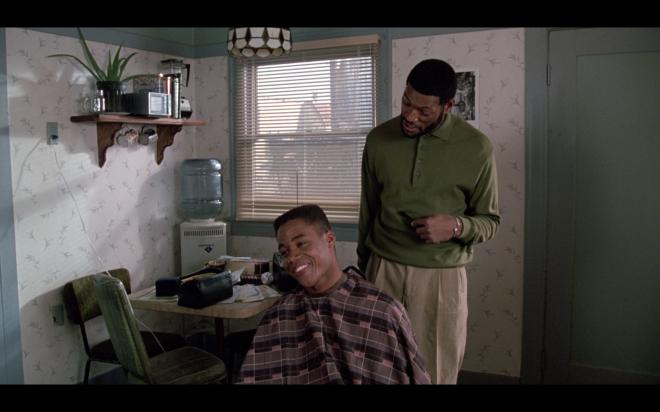 It's amazing that it's been nearly 30 years since Boyz n the Hood took theaters by storm. I was almost 10 when it originally came out, but I remember the controversy it sparked up living in a very white rural community in Michigan. Pretty much every BS sentiment about "gangsta" lifestyle and rap music was thrown about. When people start questioning the impact of M.C. Hammer or Fresh Prince of Bel-Air on the children, you know folks have issues. I have distinct memories about new school dress codes banning baggy shirts and pants - the same sort of crap came up again in the late 90s about black t-shirts and metal bands post-Columbine. People in my sphere of influence made rash assumptions about the film without seeing it - and sadly some maintain that ignorance today.

It's probably been the longer end of ten years since I last sat down and truly watched Boyz n the Hood from start to finish. It's not a movie you can just walk into in the middle and go forward. Having just recently reconnected with Do The Right Thing, it's easy to see how John Singleton's masterpiece acts as a thematic cousin to Spike Lee's seminal work. Both films cover very similar material but from the different perspectives of location. Do The Right Thing takes aims from New York while Boyz n the Hood shows the Los Angeles side of the same equation. Both are harrowing films, difficult to watch and believe as an outsider. But this is where cinema can be powerful tools. They offer the opportunity for people to learn even in the most modest ways another's hardship. There's a brutal honesty to the film with the characters and their desire to do better - it's just the paths they choose that define their fate.

While John Singleton made many more solid films, he never quite hit the same home run as he did with Boyz n the Hood. Even writing this review it's difficult to talk about him in the past tense considering he was the youngest man and first African American to be nominated for Best Director at the 1992 Academy Awards. He was a richly talented individual who died entirely too young. While not all of his films were winners - looking at you 2 Fast 2 Furious - this one is special. They say "write what you know" - and this film is a reflection of how he grew up with many of the characters based on real people he knew. As the film progresses you can feel how deeply personal this film was. That's why it's so good. It's Singleton's heart, soul, and passion wrapped up in 112-minutes.

Boyz n the Hood makes a more than worthwhile leap to 4K Ultra HD Blu-ray with a native 4K 2160p HDR10 transfer. Flipping between the 2011 Blu-ray that's included in this set, the differences are instantly noticeable. For starters, details are vividly lifelike with an organic grain structure that keeps the image looking film-like without any sign of DNR. Facial features, hairstyles, patterns in clothing, set design details - all are on screen and appreciable. The 2011 disc was decent in those regards, but this is a notable step up.

If that wasn't enough, the judiciously applied HDR10 enhances colors giving skin tones a more lifelike hue - by comparison, the 2011 disc made people look pale. Colors don't quite POP off the screen but they're heightened to give primaries an extra sheen but the colors still maintain a gritty texture. The color of Tre's blue car is a terrific example. Later - blood is given a prominent place against pure crisp white. In addition, black levels are much better balanced here where the 2011 disc could dip too close to crush, there's more separation here allowing for dark clothing to stand out from shadowed backgrounds improving overall image depth. In pretty much every aspect, this new release offers an improvement than the 2011 1080p disc.

In addition to the terrific video transfer, Sony opened up the sound mix by providing an intricately designed Atmos audio mix. By comparison, the old (and included on the disc) DTS-HD MA 5.1 mix sounds flat and constipated. In addition to some more distinct object placement, the extra channels allow for a much more open and lifelike sound. Even if all anyone on screen is doing is crossing the street, the placement of street noise in relation to footsteps or dialogue is greatly improved. Overheads don't see a lot of punch, they're used mostly for atmospherics, but when helicopters circle overhead or gunfire erupts, they roar to life. Likewise, low ends raise up another notch giving some sound effects some extra weight while the score and music generate some additional bass response. For the rest of the mix, dialog is clean and clear throughout and levels are spot on without any need of monitoring or extra adjustment.

30 years ago, Boyz n the Hood hit movie theaters in the gut and making John Singleton a premier filmmaker of a generation. In three decades the film hasn't lost any punch or grit as its themes and message are still - sadly - very relevant today. It's a powerful piece of film that still resonates and is worth showing today. Not an easy film to watch, but a necessary one. Sony delivers another terrific classic release to 4K Ultra HD with Boyz n the Hood. The native 4K transfer sparkles giving new life and detail to the image while the Atmos audio mix provides a much cleaner and more immersive auditory experience. Bonus features are largely the same since they recycled the original Blu-ray disc here, but the new 4K-exclusive discs are certainly worth taking a look at. Highly Recommended.

Sale Price 18.99
List Price 30.99
Buy Now
3rd Party 24.36
In Stock.
See what people are saying about this story or others
See Comments in Forum
Previous Next
Pre-Orders
Tomorrow's latest releases