Celebrating its 30th Anniversary, Glory is an emotional, all-star Civil War drama about the 54th Massachusetts Infantry Regiment, the North's second African American regiment created in the wake of the Emancipation Proclamation. In my humblest opinion, the film is as moving today as ever. On Ultra HD Blu-ray, Glory features a faithful and often resplendent 4K HDR10 video presentation as well as an engaging Dolby Atmos mix and all of the bonus materials from the original 2009 Blu-ray. Highly Recommended. 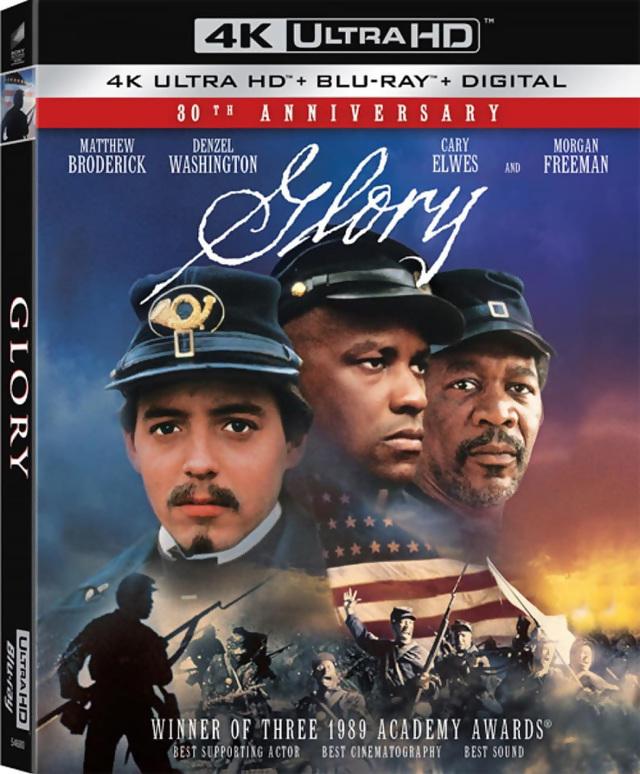 There are movies in each of our lives that become more than just a piece of cinema. Maybe it's a film that helped you fall in love with the medium itself. Maybe it's a movie that marked a key moment in your personal life. Or maybe it's a flick you've watched so many times you can replay the whole experience in your head simply by closing your eyes. As a kid who wasn't much of a reader, Glory was a pivotal cinematic experience, helping me survive American History while emotionally connecting me to the past, introducing me to a slew of performers I still adore watching to this day, and providing a foundation for my love of Hollywood composers.

The story is so wonderfully structured, juxtaposing triumph and tragedy over and over as we journey from training to battle. For every success, there is a horrifying setback, and we experience all of this drama through the eyes of our ensemble characters, rooting for them all to succeed. And I think this juxtaposition of highs and lows is what makes it all sing.

It helps too that the film's universe is so well realized. And while the production design is gorgeous and the cinematography splendid (the final battle sequence could be the subject of an entire lighting course), I'm talking more about the actors. Matthew Broderick and Cary Elwes were familiar faces for me at the time, but this is a movie that also features Denzel Washington, Morgan Freeman, and Andre Braugher. Talk about a super-cast, each of them carving out a role that could have been the lead of his own movie.

With a strong story, well-crafted visuals, and a supremely talented cast, it's hard to imagine these filmmakers failing to make this film as good as it is, but I often wonder what Glory would feel like without James Horner's haunting compositions anchoring every scene. From The Wrath of Khan to Avatar and beyond, there's no mistaking a Horner score, but Glory includes some of his best work. Collaborating with the Boys Choir of Harlem, Horner fuses military-styled drums with sweeping strings and soaring choral movements that put my heart in my throat every time I hear these recording.

In revisiting Glory for this review, I was struck by two final thoughts. First, I still can't make it through the final battle sequence with dry eyes. For my two pennies, this film is as powerful today as it was 30 years ago. And second, in the wake of Hollywood's growing diversity, I also wonder what an African American filmmaking team would do with this story (or some other tale about black Union soldiers). To be clear, this isn't a criticism. More of a thought experiment, pondering the different choices that could be made in terms of character arcs and point-of-view. Perhaps someday we'll find out with a Netflix limited series.

For a more in-depth take on Glory, please have a gander at David Krauss' review of the 2009 Blu-ray.

Glory returns to home theaters as part of a two-disc 4K Ultra HD + Blu-ray + Digital combo pack. The 4K Blu-ray features a new 4K sourced HDR10 video transfer, a new Dolby Atmos sound mix (along with the previous 5.1 and stereo options), and two bonus features. The included Blu-ray appears to be identical to the film's original 2009 Blu-ray (and is not the Mastered in 4K edition). Digital Copy redemption unlocks 4K digital rights via Movies Anywhere and its affiliate digital retailers (but 4K digital playback won't be available until July 30th) . Our review copy's code is good through December 31, 2020. 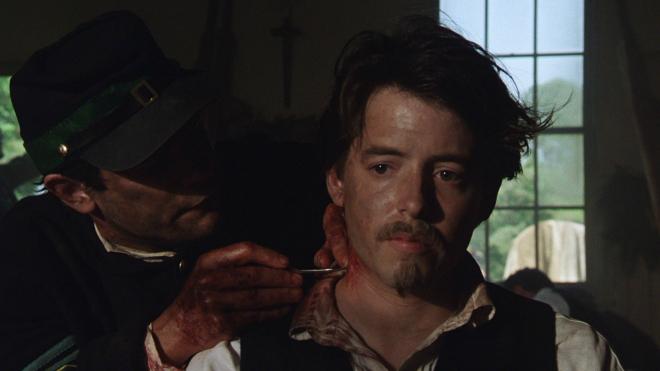 Setting expectations is paramount when diving into catalog 4K movies. Yes, they often have more native resolution than modern movies (many are finished in 2K for cinemas), but photochemical photography and film preservation are complicated processes. To put it another way, some film stocks and formats age better than others, not to mention lens and lightning choices and good old fashion human error. Along these lines, a classic like Bridge on the River Kwai doesn't look as slick and colorful and sharp as the latest Star Wars movie, but Kwai's 4K Blu-ray clearly bests its HD and SD ancestors, revealing a faithful presentation that's as close as we'll get to a theatrical screening.

Glory is similar to Kwai and other classics in that regard. It's not going to pop in the same way modern movies do, but honest to god, watching this 4K Blu-ray is like setting up a 35mm projector in your home. Set, costume, and location details are greatly improved. Skin tones are even and accurate. Exterior locations are more colorful, from blue skies and green forests to the red bricks of Boston. Film grain is natural and mostly restrained, though it spikes in certain shots here and there. That said, much to my surprise, all of the nighttime sequences, including the final battle, are crisp and clear with excellent black levels and contrast. Watching this 4K Blu-ray, you can see why the movie won Best Cinematography at the Academy Awards. Outside of a couple aging visual effects, that final sequence is extraordinary, especially when one considers lighting darker skin tones in navy blue uniforms against a black sky. It's Hollywood filmmaking and craftsmanship at its finest.

And, if you own the original 2009 Blu-ray (included with this release), you'll never be able to watch that version again once you feast your eyes on the new 4K transfer. In all honesty, the old disc seems drab and noisy with a crunchy contrast that robs the whole presentation of fine details and accurate colors. For those who own the Mastered in 4K Blu-ray, the upgrade is less significant, but the 4K Blu-ray still boasts better colors, more fine details, and improved contrast.

Despite all of the improvements, Glory still suffers from a few issues inherent to the film's original production. Namely, there are numerous instances of missed focus and general softness. Take a look at the scene where Shaw meets Frederick Douglas; many of the shots focus on Shaw's mother a few feet behind him. And even the pivotal moment where Denzel Washington's Private Trip breaks down the night before the big battle, his face is softer than the moments when Morgan Freeman is giving his epic speech. And, as I said, when you compare Glory to a modern movie -- even one finished at a lesser resolution -- it doesn't offer the same infinite sharpness and bold colors as the format's best offerings. (Such is to be expected.)

Still, I was pleasantly surprised to find this transfer to be free of encoding errors like aliasing, banding, and edge enhancement. Even better, I didn't see a single scratch, fleck of dust, or hair in the gate, which is very common with many older transfers. Overall, this Ultra HD Blu-ray is the best way to watch Glory in your home.

Glory charges onto 4K Ultra HD Blu-ray with a strong Dolby Atmos (Dolby TrueHD 7.1 Compatible) remix. In my humblest opinion, while this track lacks the fidelity and overhead aggression we hear in the format's best mixes (and with Sony's best catalog remixes), Glory has never sounded better on home video and manages to embrace the new format without any clunky changes. That said, for purists, lossless 5.1 and stereo options are included as well.

As the Academy Award winner for Best Sound, Glory has always been a favorite audio mix of mine, boasting an enveloping and iconic James Horner score as well as some heavy-hitting battle sequences that drop audiences into the horrors of 19th Century warfare. This is a movie where you feel every blasting canon, cracked whip, and burning building. Despite its many strengths, I couldn't help but notice a certain amount of thinness in a few of the effects. Listen closely to the loudest explosions and, to my ears, they lack the fidelity of modern or higher resolution recordings. It's not a dealbreaker -- most of the effects and the music sound bloody brilliant -- but something that stuck out to me this time. Along these lines, dialogue and voice-over remain crisp and clear, but may be a dB or two loud for some scenes compared to the music and effects.

In terms of sound placement in the surrounds and overhead speakers, I loved what the re-recording mixers did to this mix for Dolby Atmos. In addition to the all-encompassing Horner music, which fills your room like a cathedral choir, the battles are a highlight, pushing sound effects both skyward and discretely to the rear channels. From gunshots to clashing swords to the aforementioned cannon blasts, Glory has never been so engaging. To be clear, most of this movie is tame, relying on dialog and music. In many moments, the mix doesn't seem much different from its stereo and 5.1 predecessors (rightly so), but when it gets going in key moments, the Atmos'philes among us will be pleased.

Despite a few nitpicks on my part, I'm very pleased with what Sony has, once again, done in upgrading a catalog title to Dolby Atmos. Sure, it may not rank among my must-have demo discs, but Glory sounds wider, taller, and more immersive than ever before. 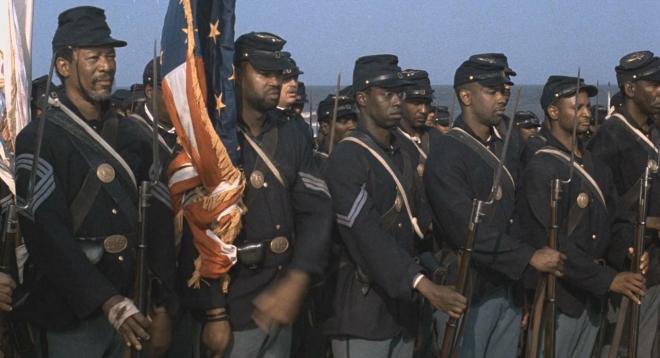 Glory boasts two bonus features on the Ultra HD disc as well as the same supplements as the original 2009 Blu-ray (the Mastered in 4K Blu-ray contained no special features). 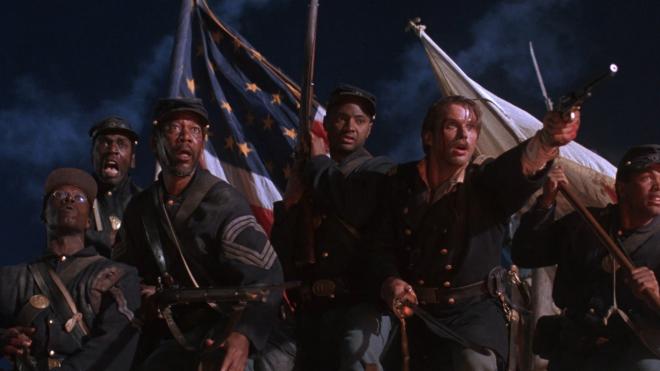 While I can't help but wonder what an African American filmmaker would do with similar material in 2019, Glory will always have a special place in my heart for its emotional, thrilling, and tragic storytelling. As a young person, it helped me find James Horner's incredible music and shined a light on the talents of brilliant performers like Morgan Freeman, Andre Braugher, and Denzel Washington.

As a 4K Ultra HD Blu-ray, Glory looks and sounds better than ever. Its 4K HDR10 video presentation is colorful, contrasty, film-like, and free of encoding errors; if the last time you saw this movie was the 2009-era Blu-ray, it's a huge upgrade. The new Dolby Atmos sound mix is also faithful, but smartly uses the formats height and rear surround immersion capabilities to enhance the experience. And the bonus features are pretty much the same as before. Highly Recommended for fans and 4K catalog enthusiasts. Well done, Sony.

Sale Price 14.96
List Price 26.99
Buy Now
3rd Party 9.37
In Stock.
See what people are saying about this story or others
See Comments in Forum
Previous Next
Pre-Orders
Tomorrow's latest releases