Rambo: Last Blood ends a forty-year-old franchise more with a pensive whimper than a unified hooah, but Sylvester Stallone's return to his iconic role has his moments that fans will enjoy. The one-man army draws blood for the last time on 4K Ultra HD with a marvelously smashing Dolby Vision HDR presentation, an excellent Dolby Atmos soundtrack but a disappointingly small set of bonuses. In the end, the UHD package is only Worth a Look.

Nearly forty years since becoming a cultural icon and three sequels later earning him a permanent place in action film history, Sylvester Stallone's darkly troubled war vet John Rambo returns to the battlefield in Rambo: Last Blood. Only, in this purported final fight, the beloved anti-hero is forced into turning his family's horse ranch seen at the end of 2008's fourth entry as the combat zone. And as the supposed concluding chapter to the series, the fourth sequel is pretty much what would be expected of the franchise — a grisly, blood-soaked spectacle of violence largely driven by topical anxieties, racial tropes and various other sweeping generalizations. It may not be a strong finish, arguably failing to provide any new surprises, but the four-decade-long journey of a soldier's return home ends similarly to its predecessors and at least, goes out on a reflective note.

From a script co-written by Stallone, the fight takes a more deeply personal turn as Rambo safeguards his adopted family and legacy against a Mexican cartel, who send their best criminals, rapists and drug dealers. Whereas previous entries saw the conflicted Vietnam vet fighting the maltreatment of soldiers in smalltown U.S.A. or defending American values abroad — a fantasized catharsis of the country's past failures — Rambo, this time around, battles to preserve any semblance of normalcy and for Gabriela (Yvette Monreal), the teenager he's raised as his own. The girl and her grandmother Maria (Adriana Barraza) are a major detail that mostly goes unexplained outside of a few verbal hints, and the filmmakers don't make much effort either, using both women as little more than plot devices for justifying the gory, blood-splattered retribution. They're essentially the story's MacGuffin. 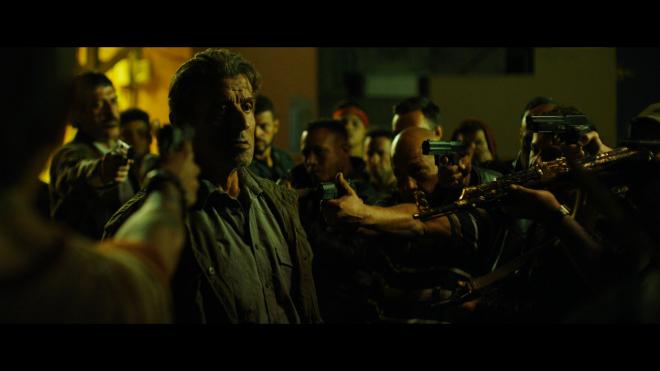 Instilling drama into the fiery fray, director Adrian Grunberg's (Get the Gringo) sophomoric effort shows the decorated war hero continues to be haunted by the demons of his past, a deeply wounded man battling himself as much as those threatening himself. Again, it's nothing new and even feels somewhat obligatory at this point, but Last Blood has its moments worth admiring. The one-man killing machine spends much of his free time digging underground tunnels that aimlessly go nowhere and don't seem to serve any purpose, other than serving as Chekhov's gun foreshadowing the climactic showdown while also being a subtle metaphor for our hero's internals struggles. Arguably, the movie's highlight is the montage sequence, a comical but entertaining clash of vintage Rambo meets Home Alone. And at a brisk 89 minutes, thanks to Stallone's tightly-written script, Rambo's final hooah doesn't overextend its welcome while nicely wrapping up an action legacy.

Lionsgate Home Entertainment brings Rambo: Last Blood to 4K Ultra HD Blu-ray as a two-disc combo pack with a flyer for a Digital Copy. The code can be redeemed via moviesredeem.com or through VUDU and should unlock the 4K Dolby Vision version with Dolby Atmos audio. The dual-layered UHD66 disc sits comfortably opposite the same Region A locked, BD50 disc, and both discs are housed inside a black, eco-cutout case with a glossy slipcover. At startup, the disc goes straight to the usual menu screen with full-motion clips and music playing in the background.

The one-man army bleeds for the last time on Ultra HD with a marvelously smashing HEVC H.265 encode that surprisingly surpasses it's Blu-ray brethren to become the best-looking title of the entire Rambo series. Shot on the Red DSMC2 Gemini camera system capable of 5K resolution and later mastered to a 4K digital intermediate, the freshly-minted 2160p transfer swaggers about with razor-sharp definition for a majority of the runtime. We can plainly make out the smallest detail on and around the farmhouse, from the distinct blades of grass and individual leaves of trees to the minor imperfections of the aged wood and the random decorations in the house, as well as the various gadgets hiding throughout John's extensive tunnel maze. Facial complexions are also notably more revealing with stunning lifelike textures, exposing every pore, wrinkle and negligible blemish.

The heavily-stylized photography of Brendan Galvin also displays an improved and better-balanced contrast, boasting remarkably more luminous and resplendent whites that brilliantly light the screen and allow for better visibility in the distance. At the same time, specular highlights radiate with a tighter, crisper glow in explosions, gunfire and various light fixtures, maintaining outstanding clarity within the hottest spots while supplying metallic surfaces with a realistic polish. Likewise, brightness levels notably benefit from the jump into the UHD warzone, providing the 2.39:1 image with richer blacks and a lovely cinematic appeal. The inky, velvety shadows at night, in the club and inside the tunnels penetrate deep into the screen with appreciable depth and excellent delineation within the darkest corners.

Equipped with the mighty resourcefulness of Dolby Vision HDR, the 4K presentation also greets the enemy with a welcomed boost in the overall colors, impressing on several occasions with a more dynamic and energetic range of secondary hues while remaining faithful to the filmmakers' creative intent. The orange-teal palette of the cinematography is perhaps even more blatant and standout, showering the gratuitous violence in richer, energetic yellows and warm amber browns, especially in daylight exteriors and sequences in Mexico. Primaries are still on the more subdued and tamed side of things, particularly greens looking a yellowish-lime hue. But the reds of blood are a deep ruby crimson while blues are an electrifying admiral shade with one of the more dazzling moments occurring at the nightclub where the red and blue neon lights create a spirited array of fuschia pinks and soft lilac purples.

In the end, this is a marked upgrade over its HD SDR counterpart. (Dolby Vision Video Rating: 92/100)

The blood flows and splatters all over home theaters with an excellent Dolby Atmos soundtrack that is also somewhat disappointing considering the last Rambo entry, which was an earth-shattering, overwhelming joyride. This fifth installment, on the other hand, debuts with a less-satisfying presentation, employing the surrounds more sparingly. Of course, a few atmospherics do pan between the sides and rears with amusing effectiveness and great directionality, and occasionally, those noises float across the overheads to widen the soundfield though it's not enough to generate a convincing hemispheric environ. However, as would be expected, action sequences erupt with plenty of activity, especially during the tunnel scenes where voices and gunfire echo and reverberate from every direction.

The better and more engaging aspect of the object-based presentation is across the fronts, displaying a wide and broad sense of space while exhibiting distinct separation and definition in the mid-range, allowing for outstanding clarity during the loudest segments. Background effects smoothly move between the channels and into the top heights, and mixed with Brian Tyler's score, the design delivers a captivating half-dome soundstage. Amid the combat mayhem, vocals remain intelligible and well-prioritized, but the low-end feels somewhat lackluster and not quite as demanding, given the on-screen action. However, bass nonetheless provides plenty of oomph and impact to the explosive visuals with amusing couch-shaking rumbles, a couple of which nicely dig into the ultra-low depths though not at high-enough decibels to damage subs (bass chart). (Dolby Atmos Audio Rating: 84/100)

The Ultra HD edition shares the same set of supplements as the day-and-day Blu-ray release.

Sylvester Stallone returns to his iconic role as the troubled and conflicted war vet in Rambo: Last Blood, the supposed final chapter to the near forty-year-old franchise. While the sequel has its moments worth appreciating and gruesomely gory violence, the fifth entry ultimately closes the series more with a pensive and divisive whimper than a satisfyingly explosive and a unified hooah. The one-man army draws blood for the last time on 4K Ultra HD with a marvelously smashing Dolby Vision HDR presentation that surpasses its Blu-ray counterpart and the same excellent Dolby Atmos soundtrack. With a disappointingly small and lackluster set of supplements, however, the overall UHD package is only worth a look for devoted fans.

Sale Price 10.78
List Price 22.99
Buy Now
3rd Party 4.98
In Stock.
See what people are saying about this story or others
See Comments in Forum
Previous Next
Pre-Orders
Tomorrow's latest releases