Sylvester Stallone returns to his action-star turn in George P. Cosmatos' Rambo: First Blood Part II, but aside from serving as the epitome of 80s American action filmmaking, the sequel never comes close to the poignancy of its predecessor. The movie charges into the formidable jungles of Ultra HD equipped with a stunning 4K HDR10 presentation, but arms it with the same lackluster DTS-HD soundtrack and an average set of supplements. Still, the overall package is Worth a Look while fans will want this edition in their UHD collection. 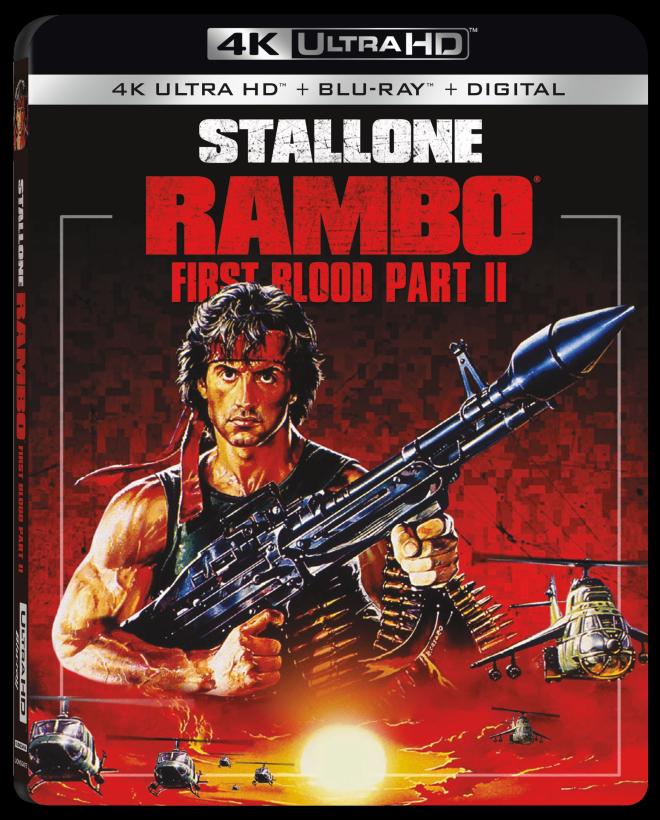 I'm continually fascinated by how drastically a film genre changes over the decades. The Rambo sequels are such a distinct product of the '80s that the series' [last] entry feels positively ancient compared to other modern twenty-first century actioners. Unfortunately, the sequels introduced an internal tonal shift that reimagined the dark, dramatic anti-hero of First Blood as a shirtless mass of invulnerable rage that could stride through streams of bullets as if they were water. This new direction robbed the series of its tension, relevance, and believability. Fans of the entire series may argue that this was precisely the point, but as a fan of the original First Blood, I can’t help but feel slighted.

Sent to prison after the events of the first film, Vietnam veteran John Rambo (Sylvester Stallone) is offered a pardon by his commanding officer (Richard Crenna) if he agrees to return to Vietnam for one last mission. Instead of fighting for himself, Rambo is tasked with investigating a POW camp to see if the straggling Vietcong are still holding US soldiers against their will. After gaining entry to the jungles of Vietnam, Rambo teams up with a female freedom fighter (Julia Nickson-Soul) and uncovers an alliance between the Soviet military and the Vietnamese army that not only threatens the surviving POWs, but the stability of the entire region. Armed with more firepower than God, a full set of exploding arrows, and enough testosterone to breed a small army of his own, Rambo must free his American brothers, defeat overwhelming enemy forces, and confront the corruption of the operation's US commander, Marshall Murdock (Charles Napier).

Rambo: First Blood Part II is all about one thing — proving it’s got bigger cojones than its dramatic predecessor. Explosions come easily and frequently, lighting the night sky and splaying corpses across the jungles of Vietnam. Rambo coats himself in mud to kill a soldier, drops from a tree to kill a soldier, shoots arrows to kill a soldier, uses his knife to . . . Well, you get the idea. From beginning to end, director George Cosmatos (Cobra, Tombstone) seems uninterested in any scene that doesn't involve the blood-n-guts hilarity the series has become famous for. Quiet conversations between Rambo and his potential Vietnamese love interest are interrupted by violence, brief developments in the character are halted by ambushes, and a stirring speech at the end of the film is undermined by wild gunplay. In all, the film racks up a body count and a collection of spent cartridges that seems to outnumber the words spoken by the principal characters. 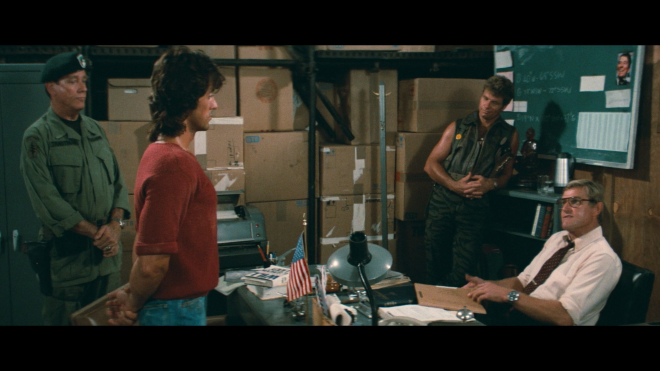 I know there are plenty of '80s action junkies who eat this sort of thing up, but I can’t get over the differences between First Blood and this grating sequel. Taken on its own accord, I might be more forgiving, but viewed as a follow-up to a classic actioner, First Blood Part II seems out of place and out of touch. Everything that made the first film so special is abandoned in favor of ridiculous scenarios that involve Rambo charging into plain sight to mow down literally legions of baddies. Almost every scene devolves into a predictable parade of death that prevents Stallone from having any legitimate resonance as an actor. By the time the credits roll, the film has established itself as an exercise in banality that will only appeal to those looking for a good laugh or a nostalgic Friday night.

All in all, I suppose I can appreciate Rambo: First Blood Part II for what it is: a pulpy, over-the-top product of a simpler time in cinematic history when the bad guys were soulless and the heroes were invincible. I just wish I could appreciate it outside of its era. Remove the brash sensationalism of American might, the varied collection of death scenes, and the complete disregard for everything that made the original First Blood so great, and there’s nothing left to discuss when it comes to this hollow, brainless follow-up.

Lionsgate Home Entertainment brings Rambo: First Blood Part II to 4K Ultra HD Blu-ray as a two-disc combo pack with a flyer for a Digital HD Copy, which can be redeemed via MovieRedeem or through VUDU but only available in HD SDR or HDX with 5.1 Dolby Digital audio. Inside a black, eco-cutout case with a glossy slipcover, the dual-layered UHD66 disc sits comfortably opposite a Region A locked, BD50 disc, which is the same Blu-ray released by StudioCanal in Europe featuring the same set of special features along with one brand-new exclusive. At startup, the disc goes straight to the standard menu screen with the usual options, full-motion clips, and music playing in the background. 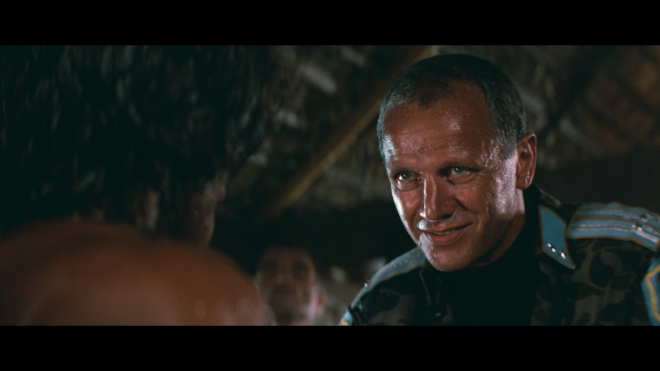 Rambo charges into the Ultra HD camps guns blazing, explosive-tipped arrows primed, and rocket launcher at the ready thanks to a spectacular, eye-popping HEVC H.265 encode. As with its predecessor, the epitome of the 80s actioner lands into hostile territory with a brand-new 4K remaster and full restoration of the original 35mm camera negatives by StudioCanal. And the results are simply phenomenal, showing substantially sharper, cleaner details in almost every scene, making this a massive upgrade over the Blu-ray. Overlooking very few instances of mild softness, the 2160p transfer comes with distinct fine lines in the stitching of clothing and uniforms, the bamboo and wood huts of the POW camps and the various background equipment. The individual leaves of trees and blades of grass are highly-detailed, and viewers can plainly make out each pebble, tiny clumps of dirt debris and every droplet of water during scenes of explosions. Close-ups are incredibly revealing, exposing every wrinkle, pore, bursting vein and negligible blemish of the entire cast.

Continuing its winning streak, the now 33-year-old film invades with significantly brighter and stronger contrast, making the movie look and feel as though shot more recently. The dramatic improvement in the whites easily leaves the Blu-ray behind to fend for itself, displaying a vivid radiance in the puffy clouds and a noticeably crisper pop in the brightest, most intensely brilliant moments. A couple of scenes, most notably in the second half when Rambo turns into a one-man army, even have that much-desired photorealism expected of the 4K format. Specular highlights are, perhaps, not quite as impressive, but there is a welcomed glimmer and shine along metallic edges and the surface of water worth appreciating, adding to those aforementioned realistic details in the photography. Likewise, black levels are considerably richer and velvety for a majority of the runtime. However, some the blackest areas mildly crush the finer details in a few nighttime moments while seeming just a tad murkier and duller in others even though shadow delineation is still strong.

Remaining faithful and loyal to legendary cinematography Jack Cardiff, the sequel is markedly more colorful and animated than its predecessor. And this HDR10 presentation arrives with a surprising array within each of the primaries, from the deep lipstick, ruby red in Rambo's iconic headband to the crimson, scarlet shade of blood. The sky glows a beautiful, true-to-life cerulean blue, which is notably different from the more arctic blue of the patches on the Russian military uniforms, and the green foliage of the surrounding jungle ranges from a juniper moss along the ground to a vibrant shamrock in the upper peaks of trees. Secondary hues also benefit from the jump to UHD, showing a wider selection within the earthy, natural tones of the palette. While much of the photography is bathed in lots of soft ambers, pale peanut browns, and sepia tans, facial complexions come with a peachy, reddish hue that looks more realistic than on the HD version with visible lifelike textures. Even more startling are the sumptuous fiery tiger oranges of explosions mixed with golden, butterscotch yellows in the center without losing or engulfing the most minute detail.

In the end, this is, without a doubt, the best the movie has ever looked and easily puts the Blu-ray to shame. Awash with a very fine layer of natural grain, the 2.35:1 image has a beautiful film-like quality that feels as though watching it cinemas for the first time. (Video Rating: 94/100) 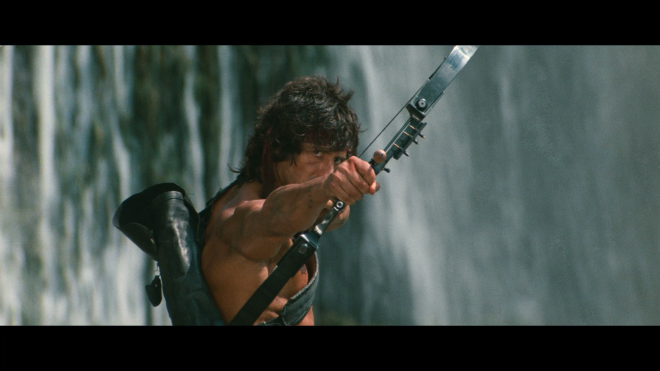 Given the massive, muscular upgrade witnessed in the 4K video, it would have been nice to also hear a new lossless audio mix, if not perhaps updated with an object-based audio option. Sadly, it's not meant to be. Poor Rambo is sent into the formidable and demanding jungles of Ultra HD equipped with the same, somewhat disappointing and lackluster DTS-HD Master Audio 5.1 soundtrack as its Blu-ray counterpart. Although the design comes with a few atmospherics and strong background activity with clean, well-prioritized vocals, it never feels as though it moves about the screen or delivers any sense of presence, failing to ever establish a worthwhile or engaging soundstage. The mid-range is noticeably plain and uniform, deserting much of the action to a flat, dull prison of monotony. Worse is a tediously stale low-end that while arguably adequate for the period is nonetheless lackluster and flavorless. (Audio Rating: 62/100) 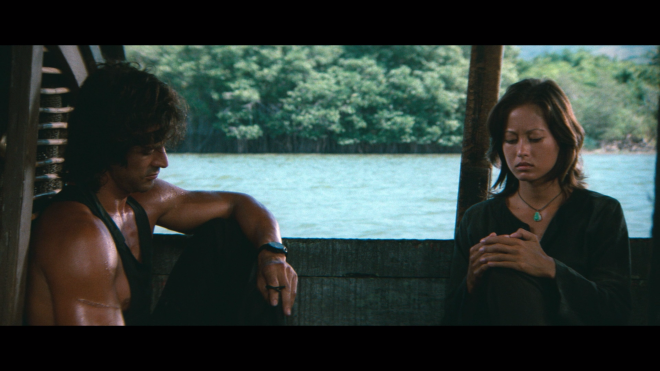 As with the first movie on Ultra HD, the sequel arrives with many of the same bonuses enjoyed in other home video releases, but this 4K edition entices fans with a brand-new featurette exclusive to this package. Special features are only available on the Blu-ray while the UHD has the commentary tracks. 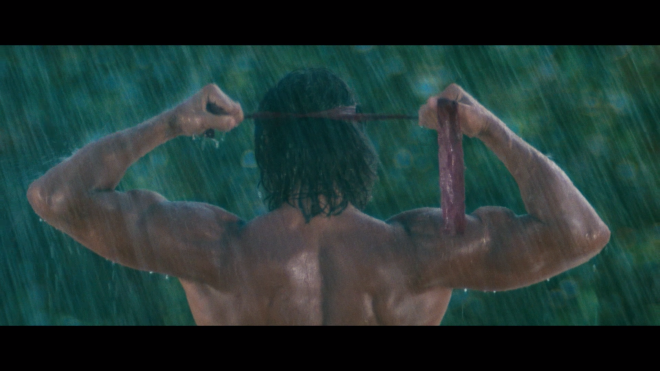 Sylvester Stallone reprised his now iconic role as the troubled one-man army in George P. Cosmatos' military actioner Rambo: First Blood Part II that completely changed the tone and direction of the franchise. Aside from it triggering some childhood memories and satisfying our collective nostalgia, the sequel is ultimately a brash product of 80s American action filmmaking, never coming close to the greatest and poignancy of its predecessor. Nevertheless, the movie charges into the formidable and demanding jungles of Ultra HD, equipped with a stunning 4K HDR10 presentation that abandons its HD SDR counterpart to the past but arms it with the same lackluster DTS-HD soundtrack as the Blu-ray. Porting over an average but nonetheless amusing set of supplements, the overall package is worth a look while fans will be more than happy to add this edition to their UHD collection.

Sale Price 14.96
List Price 22.99
Buy Now
3rd Party 24.99
In Stock.
See what people are saying about this story or others
See Comments in Forum
Previous Next
Pre-Orders
Tomorrow's latest releases