Since its original theatrical run, First Blood has grown into a classic action thriller, responsible for catapulting Sylvester Stallone into action stardom and turning the name Rambo into a cultural icon. Nearly forty years later, the movie remains a fascinating motion picture with a poignantly moving plot. The 4K Ultra HD release comes with a gorgeously stunning HDR10 presentation that easily bests previous editions, an excellent DTS-HD MA soundtrack and a nice set of bonuses. The overall UHD package is Highly Recommended.

I had avoided seeing First Blood until [some] years ago, largely because I made the mistake of seeing Rambo III first, and then Rambo II. Despite the immense box office popularity of the Rambo character in the '80s, the comic-book excesses and callous attitude towards violence of those two sequels were a big turn-off to me. So I figured First Blood could only be more of the same, and simply wrote the film off completely.

Boy was I wrong. As I learned when I finally watched the film on standard-def DVD in the late '90s, First Blood is a film that was demeaned by its follow-ups. It's a far more intelligent and challenging action film — superior not only to its sequels but to just about every comparable effort of its time. What makes First Blood so vital and refreshing is that it not only dares to ask tough questions about America's participation in the Vietnam War, but perhaps more importantly, how we treated the soldiers we sent there. Though First Blood contains plenty of action and graphic violence, it is not a mindless or manipulative film.

The story should be familiar to even those who have never seen the film. John Rambo (Sylvester Stallone) has just returned from Vietnam. Jobless and lost in a world that no longer has a place for him, Rambo visits a small town to connect with old war buddies, only to be arrested and abused by local Sheriff Will Teasle (Brian Dennehy). Triggered by his war experiences, Rambo jumps into action, escaping confinement and leading the police on a statewide manhunt that will have highly destructive consequences. Only the calling in of Rambo's Vietnam Colonel, Samuel Trautman (Richard Crenna) can hope to save him from his one-man assault. But has Rambo passed the point of no return? 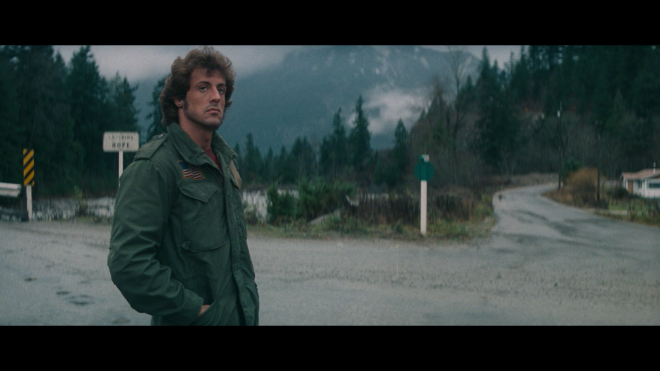 As an action movie, First Blood works. Directed with efficient craftsmanship by Ted Kotcheff, and based on the little-known novel of the same name by David Morrell, the film is very well paced, gripping and always exciting. And unlike its successors, this is no ridiculous, over-the-top comic book. It is refreshing to see the audience not condescended to — Rambo is not the warrior with superhero-like powers as he became in the sequels. He's flesh and blood, relying on only his training and his wits to survive, which grants the character a palpable realism. Every event in the film, though a bit larger than life (this is a movie, after all), remains plausible. First Blood is the rare '80s action movie to create such a believable and realistic portrayal of its hero that the consequences of what he does actually mean something.

First Blood certainly remains notable in the career of Stallone. In the character of John Rambo, he found a role second only to Rocky Balboa. As we learn in the included supplements, Stallone had a significant hand in crafting the screenplay, as well and the input proved essential. The film's unexpected and unusual ending certainly would not have worked without him. Yes, there is yet another one-on-one battle between the good guy and the bad guy (or in this case, two anti-heroes). But it is in the film's surprisingly emotional climax that First Blood truly elevates itself to the top ranks of the genre. Maybe it is heavy handed, and maybe it is sentimental, but Stallone's eloquent handling of a difficult scene ends up making a strong statement about a sad chapter in U.S. history.

Ultimately, I'm not sure that I agree with every position First Blood takes. But the fact it even dares to ask questions in a genre known for avoiding them turns what should have been just another forgettable, mindless '80s B-movie into my pick for the most underrated movie ever made about Vietnam. Too bad Stallone had to go and ruin it with all those dreadful sequels . . .

Lionsgate Home Entertainment brings First Blood to 4K Ultra HD Blu-ray as a two-disc combo pack with a flyer for a Digital HD Copy, which can be redeemed via MovieRedeem or through VUDU but, at this time, is only available in HD SDR or HDX with 5.1 Dolby Digital audio. Inside a black, eco-cutout case with a glossy slipcover, the dual-layered UHD66 disc sits comfortably opposite a Region A locked, BD50 disc, which is the same Blu-ray released by StudioCanal in Europe featuring the same set of special features along with one brand-new exclusive. At startup, the disc goes straight to the standard menu screen with the usual options, full-motion clips, and music playing in the background.

A squad of trigger-happy weekend warriors charge Ultra HD with a stunningly gorgeously HEVC H.265 encode, which was struck from a brand-new 4K remaster and full restoration of the original camera negatives by StudioCanal. Although occasionally showing its age in a few spots, the results are simply phenomenal, easily besting the Blu-ray in a one-to-one combat. The 2160p video shows considerably sharper lines in the clothing and buildings while the lettering of signs and window store posters are more distinct and legible. Background information is plainly visible, and the leaves of trees, individual blades of grass and the ferns covering the ground are razor-sharp for the majority of the runtime. From time to time, resolution dips every so slightly and there is evidence of very mild aliasing in the window blinds of the police station, but it's admittedly easy to miss and doesn't ruin the overall picture. Nevertheless, awash with a consistently thin layer of natural grain, the transfer has a welcomed film-like quality fans will love.

The video also arrives into town with enhanced, stronger contrast while still staying true and faithful to Andrew Laszlo's creative, stylized cinematography, which actually restrains the contrast to give the story a somber, serious feel. On UHD, the photography looks drearier and bleaker without taking away from the bright, vivid whites of the various lightning. A subtler upgrade are the specular highlights throughout, giving the metallic objects and the chrome trimming of cars a sparkling, polished shine while allowing incredible detailing in the brightest, most intensely hot spots, like headlights, neon signs and the many explosions. Brightness levels also show some of the best improvements over the 1080p version, displaying significantly richer, more stygian blacks, from the hair of the cast to the guns and clothing. For much of the picture, velvety midnight shadows penetrate deep into the screen without sacrificing the finer aspects in the background, giving the action an appreciable dimensionality and a lovely cinematic appeal. However, there are a couple minor moments where blacks lose a tad of their luster and are not quite strong, but thankfully, it's not too egregious or distracting.

The subdued, overcast look of Laszlo's photography, at first, seems to hamper the colors, and to some degree, it does limit the overall palette, making much of the action somewhat plain. However, the HDR10 presentation nonetheless comes with sumptuous primaries, which are most apparent in the police car lights showing dramatically electrifying blues and candy rose reds. Meanwhile, clear skies are a lovely cerulean shade, and blood can appear a thickly ruby currant. Interestingly, the greens of the surrounding foliage and forest are not much brighter than its HD SDR counterpart, but viewers can still make out the small differences in the emerald greens of pine needles and the moss shades in ferns. The enhancements in the secondary hues are a bit more nuanced and understated, but explosions come with an animated, fiery orange and a richly vivid yellow in the center. At the same time, facial complexions appear rosier and more accurate to the cold climate while revealing negligible blemishes, wrinkles and pores during close-ups, making it the best the movie has ever looked on any format and a fantastic upgrade. (Video Rating: 94/100)

Although the classic action thriller strolls into town with what seems like a new DTS-HD Master Audio 5.1 soundtrack, it does not reveal a significant, night-and-day difference from the matrixed DTS-HD HR 6.1 track from the 2007 Blu-ray. However, given the movie was originally recorded in 4-track Dolby Stereo, the elements lend themselves terrifically for lossless audio, occasionally filling the surrounds with the ambient noise of the local wildlife, the wind blowing through the trees or the sounds of helicopters flying above. It may not be enough to convincingly generate an enveloping experience, leaving large pockets of silence during a few action sequences, but it sounds great nonetheless. Much of the attention and focus is understandably placed in the fronts where atmospherics and background activity better create a broad and spacious soundstage, discretely traveling across the screen flawlessly. The action and Jerry Goldsmith's score exhibit outstanding clarity and detailing in the mid-range while vocals are precise and very well-prioritized amid the most chaotic moments. For the most part, the low-end is adequate for an action feature of this period, but there are times when the bass delivers a welcomed oomph and impact to the visuals. (Audio Rating: 78/100)

Many of the supplements are ported over from previous home video releases, but as far as I can tell, it's the first time they are all offered together on the Blu-ray format. And to further entice fans into upgrading, the package also includes a brand-new, exclusive featurette. Special features are only available on the Blu-ray while the UHD has the commentary tracks.

Responsible for catapulting Sylvester Stallone into action stardom and turning the name Rambo into a cultural icon since its original theatrical run, First Blood remains a fascinating motion picture with a poignantly moving plot. Looking back, the story, based on the novel of the same name, is more than a typical military actioner, touching on the psychological affects of war and the treatment of veterans after the Vietnam War. The 4K Ultra HD release comes with a gorgeously stunning HDR10 presentation that easily bests previous editions and making it the best the movie has ever looked on any format. The video is accompanied by an excellent DTS-HD MA soundtrack and a nice new set of bonuses. The overall UHD package is Highly Recommended.

Sale Price 13.99
List Price 22.99
Buy Now
3rd Party 24.99
In Stock.
See what people are saying about this story or others
See Comments in Forum
Previous Next
Pre-Orders
Tomorrow's latest releases