Ultra HD: Worth a Look
N/A Stars out of 5 If not for the hilariously excessive violence providing some mild entertainment value, Rambo III would be a chore to get through — the quintessential 80s actioner emphasizing cartoonish action over an engaging story. The third entry in the series mounts a rescue mission on Ultra HD with a great-looking 4K HDR10 presentation, the same passable DTS-HD MA soundtrack and a healthy set of supplements. The overall UHD package is Worth a Look for the curious but fans will gladly want it in their collection.

Check out our review of the Rambo: The Complete SteelBook Collection - 4K Ultra HD HERE.

Halloween, 1990. With a strip of red fabric from mom’s sewing kit, a smear of red paint across a tattered shirt, and a clunky Star Wars action figure case shaped like a machine gun, I was John Rambo. At the time, the Rambo sequels were the pinnacle of action films in my young eyes. First Blood was too slow to keep my attention, but its sequels were the craziest R-rated cartoons I ever snuck into my parents' basement to watch. This year marked the first time I had sat down to watch the Rambo series in [decades]. To my surprise, First Blood hit me as an instant action classic while First Blood Part II undermined everything the first film had established, and Rambo III put the proverbial bullet in the trilogy's head.

Hopped up on a haphazard blend of adrenaline and absurdity, Rambo III opens as Colonel Trautman (series regular Richard Crenna) finds our reclusive hero (Sylvester Stallone) hiding out in a Bangkok monastery, earning money by way of illegal fighting tournaments in the city. Trautman asks Rambo to join him on a mission to deliver weapons to Afghani rebels resisting hordes of invading Soviet forces, but the world-weary warrior refuses. However, when Rambo learns of the mission's failure and Trautman's subsequent capture, he makes his way to Afghanistan to rescue his friend, assist the rebellion, and administer his particular brand of justice to the Soviets responsible for a number of heinous atrocities.

Suffering from an anxious pace, unintentionally hilarious gore, and a ludicrous series of action beats, Rambo III feels more like a parody of the series than a genuine entry. Stallone's character hasn't evolved in the slightest — early glimpses of his new life in Bangkok are little more than a setup for the fighting skills utilized later in the film. He still relies on explosive arrows, reams of bullets and pure, unadulterated brawn to save the day. Even the strategies he employs in his assault are paper thin. The cavernous terrain of Afghanistan could have provided a wealth of new battle scenarios, but the filmmakers merely recycle familiar scenes we already caught in First Blood and First Blood Part II. Worst of all, the film's underdeveloped script strives to generate empathy for the Afghani rebels, but never really develops their role in the story. They're only used as a means to rekindle a bit of Rambo's humanity, dying on cue and offering stories of their struggles that allow him to invest in their plight. 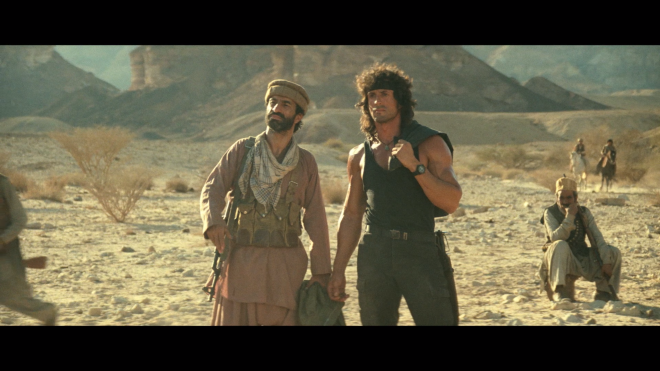 Ironically, I found myself enjoying the historical conflict at the core of Rambo III more than the film itself. I was terribly amused to watch Rambo participate in a slice of history I only recently learned about in Charlie Wilson's War. While I doubt Charlie had a one-man killing machine to thank for driving the Soviets out of Afghanistan, it does add an entertaining layer to an otherwise tedious, repetitive actioner. That being said, I can't imagine my reaction to the film had I simply evaluated it on its own merit. Fans of the series and other 80s action extravaganzas may revel in the film's gratuitous and consistent bloodbath, but I felt the experience was dated, preposterous, and unworthy of its association with First Blood.

I know there's an audience out there that will scoop Rambo III up as soon as it hits store shelves. Personally, it's just not my flavor. With every passing scene, I longed for the gritty tone of First Blood and its prioritization of character over action. This third entry in the series is a subpar shoot-em-up that reduces the brilliance of the first film to a dull, monotonous video game. Ironically, the only warm and fuzzy memories of Rambo III I plan to cling to come courtesy of the addictive Sega Genesis game that dominated a solid month of my eighth-grade year.

Lionsgate Home Entertainment brings Rambo III to 4K Ultra HD Blu-ray as a two-disc combo pack with a flyer for a Digital HD Copy, which can be redeemed via MovieRedeem or through VUDU but only available in HD SDR or HDX with 5.1 Dolby Digital audio. Inside a black, eco-cutout case with a glossy slipcover, the dual-layered UHD66 disc sits comfortably opposite a Region A locked, BD50 disc, which is the same Blu-ray released by StudioCanal in Europe featuring the same set of special features along with one brand-new exclusive. At startup, the disc goes straight to the standard menu screen with the usual options, full-motion clips, and music playing in the background.

Like the first two movies in the series, the third entry mounts a rescue mission on Ultra HD thanks to a brand-new 4K remaster and full restoration of the original 35mm camera negatives by StudioCanal.

Armed to the teeth with an excellent HEVC H.265 encode that delivers a nice upgrade over the Blu-ray, the 2160p transfer enjoys a welcomed uptick, showing slightly better detailing in building architecture, military vehicles, and in the rough stitching of clothes. However, it does come with its fair share of poorly-resolved moments and overall, looks softer compared to its two compatriots. Moreover, of the three movies, the second sequel is the least attractive of the bunch, displaying a somewhat average contrast by comparison. Granted, whites come with a bit more pop to them, but it's not by much. At the same time, specular highlights are not particularly standout or impressive. In fact, the brightest and most intense spots bloom enough to wash away the finest details of spotlights, headlights and most notably, explosions.

The more positive aspects are the improved brightness levels, providing the 2.39:1 image with darker, richer blacks throughout. Velvety, stygian shadows penetrate deep into the screen for some appreciable dimensionality and cinematic appeal without sacrificing or engulfing the smaller background information. John Stanier's photography favors earthy browns and yellows, but the HDR10 presentation, nonetheless, benefits the primaries, showing lusher, spirited blues in the sky and vivid crimson reds in clothing and blood. Secondary hues, likewise, show a bit more variety, particularly in the golden yellows of the temple roofs, the mocha-bone tans of the sand and the tawny caramel tones of the prison. Facial complexions also appear more natural and lifelike with a sunburnt appeal that feels accurate to the climate and region.

Awash with a thin but pronounced layer of grain, the cheesy 80s actioner is ultimately saved by a welcomed and attractive film-like appearance fans will love. (Video Rating: 82/100)

Once again, Lionsgate and StudioCanal have opted to port over what seems like the same DTS-HD Master Audio 5.1 soundtrack as before. Granted, this design comes with a better sense of presence than the sequel, but a redo of the original elements would have nonetheless been most welcomed. Either way, this lossless mix displays a broader, more engaging soundstage as various background activity smoothly moves across all three front channels, and the mid-range is fairly dynamic with plenty of good clarity in the loudest segments, though it also feels pretty uniform and limited in the upper frequencies. Occasionally, some ambient effects somewhat effectively bleed into the surrounds, nicely expanding the soundfield but don't really feel convincingly enveloping. Low bass comes with some appreciable oomph and weight during explosions, but not quite as robust or demanding as the visuals would imply, nothing to truly rock the house or impress. (Audio Rating: 74/100)

Like its predecessors, the third entry ports over many of the same bonuses as other home video releases, but this 4K edition features a brand-new featurette exclusive to this package. Special features are only available on the Blu-ray while the UHD has the commentary tracks.

Rambo III is ultimately an exercise in over-the-top, flag-waving machismo, another quintessential 80s actioner emphasizing cartoonish violence. Sylvester Stallone reprises his now-iconic role as the troubled vet in a very thin, barely engaging plot that's essentially a repeat of Part II, but if not for the hilariously excessive and ludicrous violence providing some mild entertainment value, the movie would be a downright chore. The third entry in the series mounts a rescue mission on Ultra HD with a great-looking 4K HDR10 presentation that while besting its HD SDR counterpart is actually the weakest of the bunch, and the video is joined by the same passable DTS-HD MA soundtrack enjoyed on the Blu-ray. With a healthy set of supplements providing fans a couple hours of enjoyment, the overall UHD package is worth a look for the curious but fans will gladly display it in their collection.

Sale Price 15.12
List Price 22.99
Buy Now
3rd Party 15.12
In Stock.
See what people are saying about this story or others
See Comments in Forum
Previous Next
Pre-Orders
Tomorrow's latest releases