Thor: The Dark World crosses time and space to 4K UHD Blu-ray courtesy of Disney/Marvel. While the film takes on a much more welcomed fantasy-focused look and feel, the behind-the-scenes drama of last-minute director replacements and obvious reshoots overshadows the production. It's still a fun flick, but it's among the weakest of Marvel's slate. Disney gives The Dark World a fitting upgrade on 4K UHD that fairs far better than its predecessor in the A/V department. Still, this is a pretty rough movie itself and asking fans to dole out again for modest visual and audio improvements my be a tough call for some. Worth A Look.

"Look, why don't you let me take over? I'm clearly the better pilot!"

"Is that right? Out of the two of us, which one can actually fly?"

To be fair, The Dark World is not that simple but pretty darn close! While the production looks amazing, plotting relies on a lot of near-constant exposition to get by and obvious reshoots to add more comedy breaks the film's setting and tone making a clunky-at-best second feature for Marvel's Phase 2.

Read our original review for Thor: The Dark World. 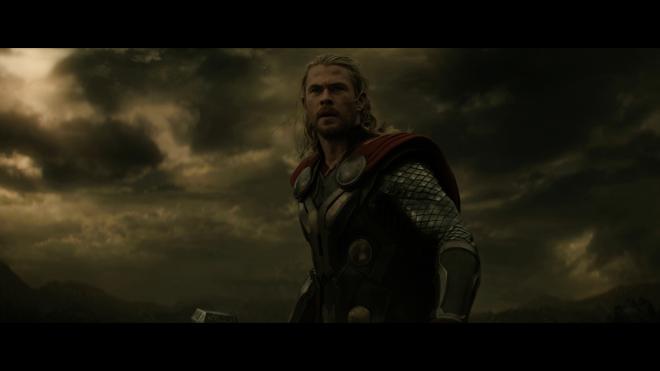 I had a screenwriting professor in school who put it very simply: if you have to use "dark" in your title or in character descriptions to prove your story is "dark," you're blowing it. Looking back at this film again, I feel that truism. When I left the theater, I thought Thor: The Dark World was great. I had a blast. I loved the look of the film, I loved seeing the characters again, the action was much more imaginative and exciting than the first film and it looked great in 3D. Then I bought the 3D Blu-ray and I felt like I was watching a different movie. Story flaws stand out in repeat viewings. There is a lot going right here, but a lot didn't work. Plotting aside, its biggest grievance is casting a great actor like Christopher Eccleston and wasting him as a boring unmotivated stop-gap villain.

This entry is the sore thumb of the franchise. It's still fun and has some entertainment value, but it's rough. Thanks to Avengers: Endgame there is at least a reason to go back and watch it again and not avoid it altogether.

Thor: The Dark World strikes 4k UHD Blu-ray courtesy of Disney/Marvel in a two-disc 4K UHD + Blu-ray + Digital set. The discs are housed in a standard 2-disc case with identical slipcover artwork. The included standard Blu-ray is the same one issued from 2013 and hasn't been remastered or upgraded. The 4K disc opens to Disney's standard language selection menu before arriving at an animated main menu with traditional navigation options. The included Digital Copy unlocks 4K streaming rights where available. 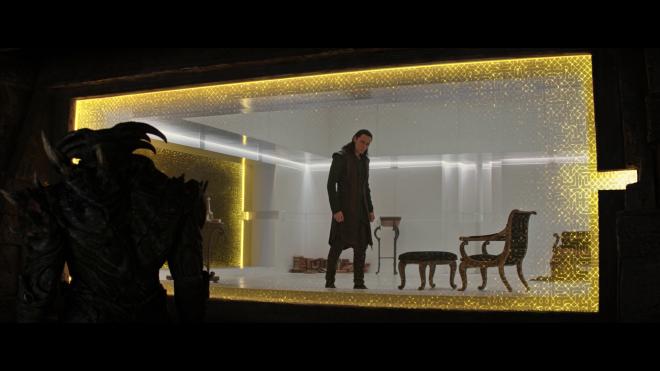 Thor: The Dark World manages a stronger 2160p 2.40:1 transfer than its predecessor! Different shooting style, more practical sets, and clothing, some more refinement in Marvel's post-production procedures show through here. While this isn't a 100% night and day difference over the Blu-ray, there's enough of a difference to get a bit excited.

As far as details go, the thing that stood out to me most was textures. The textures stitched into Thor's cape, the fine etchings in Odin's armor, the detailing in Loki's cape-jacket thing - they all really popped in this presentation. There are still some soft moments, but those are baked in. They looked soft in the previous 2D/3D Blu-rays, they're still soft here. But fine facial features, skin pigmentations, freckles, the Dark Elves' creepy masks - they all get an extra layer of refinement. 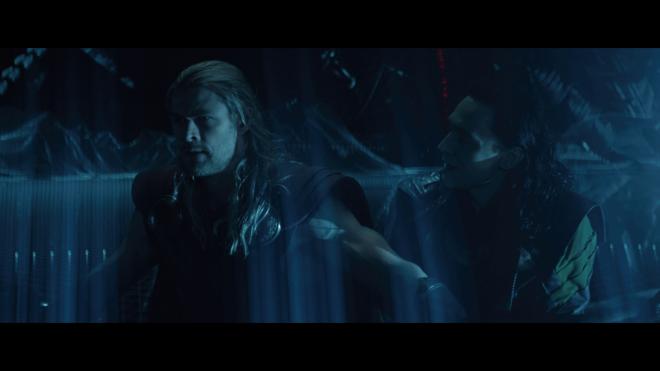 With HDR10 deployed, the colors, black levels, and contrast all enjoy subtle improvements. The film went for the RenFest fantasy earthy green/yellow tones and the HDR grading gives those shades some extra punch while allowing for brighter primaries to have their place. Thor's red cape continues to be a bright spot in any scene. At the same time, the crimson red of the Aether also gives some welcome spectral highlights. Black levels are nice and inky giving the image some genuine depth while contrast keeps whites looking crisp and bright without blooming.

Despite HDR highlighting a few iffy visual effects, most of the film's effects have a nice practical feel while some of the heavy CGI sequences actually look better now with some extra color tone and shading to give the sense of weight. At the end of the day, despite also being sourced from a 2K DI, I'm much happier with this 4K UHD presentation than I was with the original Thor.

For anyone curious about the Dolby Vision-enabled 4K Digital version, there are some subtle differences but not earth-shattering. The biggest bang for your buck with this Dolby Vision push is any really dimly lit or shadowy sequence picked up some extra gradience. When Thor and the Warriors Three are making merry after their early victory, the orange firelight glow isn't just a uniform orange but has shades from light to dark. Given the film's favoring of earth tones, the DV also pushed colors a bit more brownish - but in a nice way. Skin tones are still healthy and details are relatively strong. 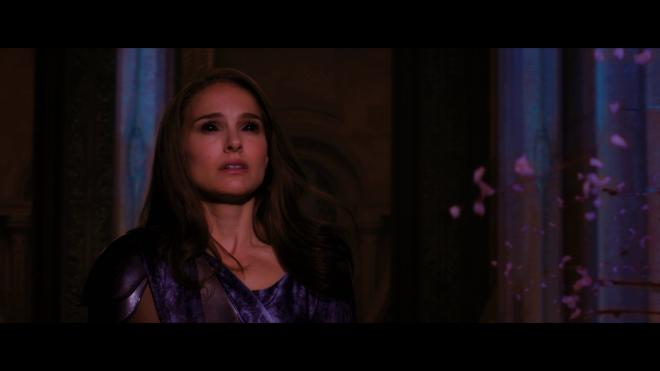 Like the first film - and so many other Disney releases - turn up your volume to enjoy this Dolby Atmos soundtrack. This isn't a bad mix, not at all, but it does require the extra tweaking we've had to do for so many other releases. Not a deal-breaker though because once you get this set where it needs to be it really kicks to life. The opening battle sequence was a solid start with action on all surrounds and the Bifrost opening above and kicking the vertical channels - it was pretty damn awesome!

Dialogue is clean and clear overall, there is a lot more conversational bits to get in all that exposition with a lot of background happening. Thankfully nothing gets lost and you don't have to struggle to hear what's going on. Even in quieter bits, there's still some nice surround activity to keep channels engaged and the soundscape present. A rainy sequence offers some decent overhead activity as well. I'd say it offers a much more dynamic presence than the mix afforded Thor. All around, this is a solid Atmos mix.

But is it inherently better than the previous DTS-HD MA 7.1 track? Yes...ish. Overall, I appreciate the extra space Atmos gives the film. Compared to other Atmos tracks out there, the dynamic placement of object effects may not be as pinpoint as others, but I felt the presence of laser shots or random sound effects much more specifically to their place on screen or in the sides and rears than I did flipping back and forth to the standard Blu-ray's DTS track. I'd call it a success, but maybe not a crowning achievement. If Disney had recycled the DTS-HD MA 7.1 track, I wouldn't have complained. Both do their jobs very well. It's a split hair call. 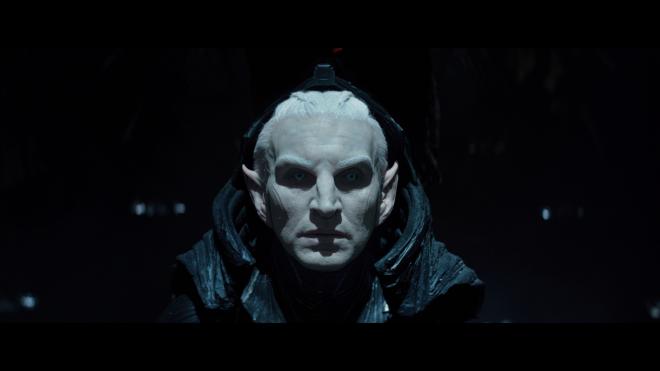 All bonus features are on the included standard Blu-ray, none are found on the actual 4K UHD disc. 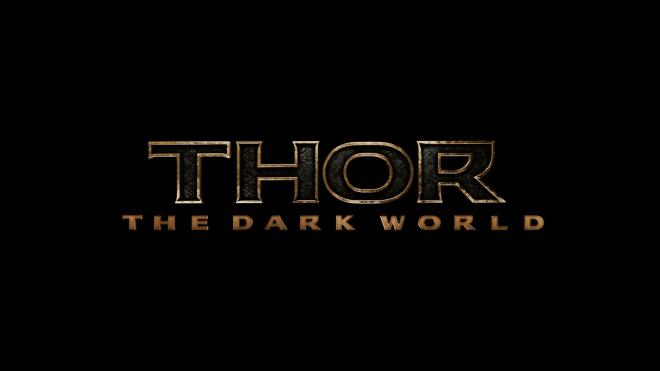 Thor: The Dark World isn't a great movie, but there several other MCU franchise siblings outshine it. Hemsworth and Hiddleston make the best of things and the film's production design creates a rich fantasy world, but it's decidedly a middling movie caught in the middle of setting up a bigger, better and much more interesting adventure. It's there for fun and thanks to Endgame it at least remains a relevant entry in the Marvel Universe.

Disney/Marvel drops Thor: The Dark World to 4K Ultra HD Blu-ray with stronger results than the previous outing. This film enjoys more practical sets and creatures allowing for a little more refinement in production design, clothing and facial details over its SDR counterpart. HDR10 gives the image a nice kick in colors and balanced black levels. The Dolby Atmos mix is again on the softer side, but once you get your levels where you like them, it rocks out nicely. How much value you'll get out of this technological upgrade depends entirely on how much you enjoy the film itself. If you're not a fan, the A/V presentation isn't going to change your mind. Worth A Look.

Sale Price 17.87
List Price 39.99
Buy Now
3rd Party 11.96
In Stock.
See what people are saying about this story or others
See Comments in Forum
Previous Next
Pre-Orders
Tomorrow's latest releases