Spectacularly violent and gory, Hellboy satisfies on the horror visuals but ultimately fails to summon interest in the diabolical adventures of the Dark Horse Comics antihero. The movie rides into Ultra HD with a great-looking Dolby Vision HDR presentation and a demo-worthy Dolby Atmos mix, but a very small set of bonuses. Still, the overall UHD package is worth a look.

The third time is definitely not a charm for the devilish anti-hero who works on the side of good and is affectionately known as Hellboy. Marketed as a reboot to Guillermo del Toro's two-film series, Hellboy marks the third effort for a live-action adaptation of the cheeky, cynical half-demon superhero from Dark Horse Comics. And the results are painfully, sinfully bad. For fans of the original comics, del Toro's movies and horror-hounds in general, the pain is made all the worse by the amazing visuals, makeup and stage design on display. Putting the terrible story and awfully written script aside for a moment, the production is frankly beautiful and fantastically imaginative. Look no further than the Baba Yaga sequence where those familiar with the original Russian folktale will immediately giggle with fiendish delight at her house walking on chicken legs, the creepy supernatural crone crawling out her pestle and mortar or the bodies of slaughtered children hanging in her kitchen.

True to the spirit of the comics, this hard R-rated version of the trenchcoat-wearing beast once summoned by Nazi occultists is the sort that should attract ravenous horror fanatics. This is most definitely not the family-friendly superhero variety currently dominating cinemas, and it's easy to tell director Neil Marshall (Dog Soldiers, The Descent) is having an absolute ball pushing it to the mature-audiences-only extreme, particularly in the balls-to-the-wall gorefest insanity that ensues in the movie's climactic finish. The blood-soaked carnage on display perhaps shouldn't come as much of a surprise when the central villain is literally called the Blood Queen (played well but with a terrible British accent by Milla Jovovich) and worshipped by Gruagach (Stephen Graham), a boar-like fairy tearing out the tongues of monks and piecing together the ancient sorceress' body parts. Impressively photographed by Lorenzo Senatore, the nightmarish visuals are just enough to keep this movie from being a complete disaster. 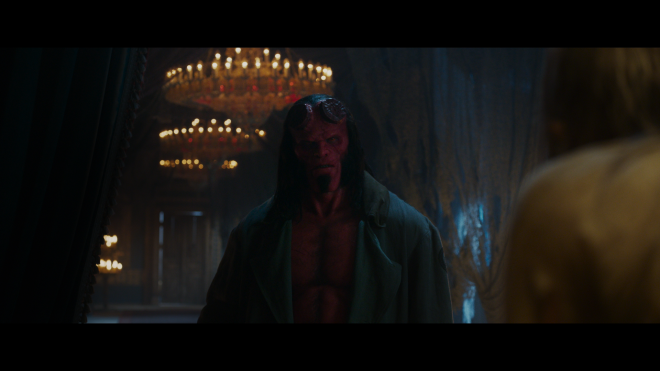 However, Andrew Cosby's script, which drew inspiration from four comic stories and originally intended as a follow-up to del Toro's The Golden Army, is ultimately where the movie sorely disappoints. Right from the cold open to the moment we're introduced to our titular diabolical antihero (David Harbour of Stranger Things fame), it becomes apparent the filmmakers have little confidence in their audience with characters going out of their way to state the obvious or practically narrates the on-screen action. After Ian McShane's voiceover explains King Arthur's involvement in this plot, Jovovich's evil witch needlessly announces he's holding the famed Excalibur sword just before being chopped into pieces. Later, McShane's Trevor Bruttenholm quickly lists off Hellboy's unauthorized mission in Tijuana with the subtlety of thorny cacti to the face, followed by eye-rolling bad jokes and puns. In fact, all the so-called gags, banter and one-liners are so lame, it might as well be devoid of humor, and it'd still be the same movie.

The rest of Hellboy continues in similar fashion, clumsily dumping chunks of exposition throughout. To be fair, the information shared provides necessary backstory to certain characters, but they also feel randomly thrown into the story and ruin the pacing. Admittedly, I like that the filmmakers remained faithful to the comics, connecting Alice Monaghan (Sasha Lane) to Hellboy's fight with Gruagach and the Blood Queen. Seeing Lobster Johnson (Thomas Haden Church) in what essentially amounts to a cameo appearance during Hellboy's origins sequence is a welcomed bonus for fans, and Daniel Dae Kim made a great Benjamin Daimio. But again, these moments are more pleasing to the eyes and imagination than they are engaging, meaning these random flashbacks are sown together solely for jumping from one visually spectacular moment to the next. Hellboy is sensationally violent and gory but also yawn-inducingly dull hampered by a disinteresting, humorless story.

Lionsgate Home Entertainment brings Hellboy to 4K Ultra HD Blu-ray as a two-disc combo pack with a flyer for a Digital HD Copy, which can be redeemed via moviesredeem.com or through VUDU, unlocking the 4K Dolby Vision version with Dolby Digital Plus 5.1 audio. The triple-layered UHD100 disc sits comfortably opposite a Region A locked, BD50 disc inside a black, eco-cutout case with a glossy slipcover. At startup, the disc goes straight to the usual menu screen with full-motion clips and music playing in the background. 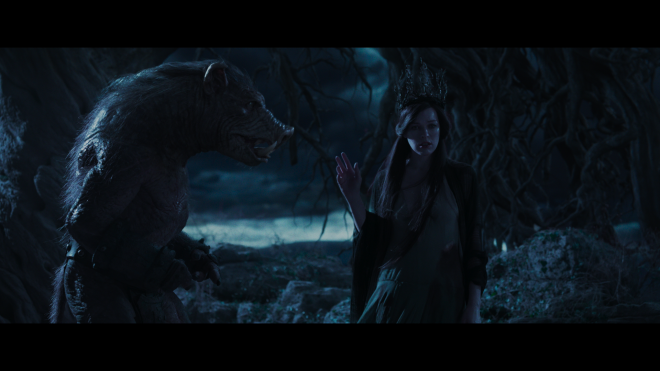 Big Red rains down fire and brimstone on Ultra HD with a great-looking and occasionally impressive HEVC H.265 encode that's sure to satisfy owners even though the end result doesn't offer a massive upgrade over the day-and-date Blu-ray.

The movie was shot on the Arri Alexa camera system capable of 3.4K resolution, and those elements were later upconverted to a 4K digital intermediate. The upscaled transfer enjoys a welcomed uptick in overall definition and boasting excellent clarity during many interior scenes. We can also better makeout and appreciate the extensive makeup work done to David Harbour, exposing the smallest feature, crack and the fractured edge of Hellboy's sawed-off horns while still clearly making out every pore and wrinkle. Individual hairs are highly-detailed, and the stitching and threading of clothes are sharp. However, some of the sharpest edges, like lettering on monitors or the bead curtains in Alice Monaghan's apartment, seem to flicker and waver a tad, and there seems to be a smidge of banding in a couple of scenes with ethereal smoke. Also, the CG visuals are noticeably softer and blurrier than the HD version, making Gruagach and the giants standout as cartoonish against the more detailed backdrops.

Nevertheless, a notable improvement is the more dynamic and vivid contrast throughout. Although lightly subdued for providing the story with a dark, horror-oriented tone, Lorenzo Senatore's photography nonetheless displays crisper, more radiant whites, which is greatly appreciated in the climactic battle in London, but a favorite moment is when Baba Yaga makes an appearance. Specular highlights are not particularly noteworthy, but the brightest spots still radiate with a resplendent intensity, such as the scenes with the flaming sword even though they don't really gain any more detailing than before. Better still are the richer, inkier black levels with excellent gradational differences between the various shades, from Hellboy's silky hair to the Blood Queen's gothic outfits. While providing the 2.39:1 image with a lovely cinematic appeal, the 4K video maintains outstanding delineation within the darkest, murkiest shadows, and the inside of Baba Yaga's house is again a genuine highlight.

True to the stylized intentions of the filmmakers, the Dolby Vision HDR presentation is also crazy colorful and vibrant from the moment our devilish antihero arrives in Tijuana, bathing the screen with dramatic purples, pinks and greens from the neon lights while the streets are deep hazelnut browns but the wrestling match is flooded with a variety of warm tans, granola, and earthy sand tones. The rest of the cinematography favors a variation of blues, from the cerulean sky to the electrifying navy in computer monitors. Hellboy's vision of the apocalypse and the climactic battle comes with a beautiful mix of fiery oranges and rich golden yellows, making the molten lava really pop. As for Big Red himself, he remains about the same, but his body and face is of a faintly deeper crimson red. Flesh tones of the rest of the cast, on the other hand, come with a more natural rosiness and lifelike textures. (Dolby Vision Video Rating: 82/100) 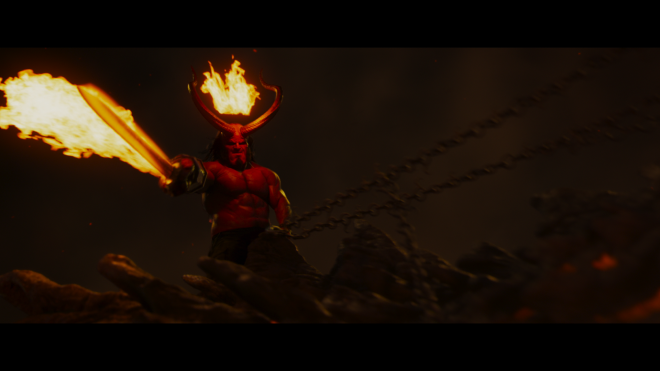 The fantasy-horror flick debuts to home theaters with a hellishly marvelous, demo-worthy Dolby Atmos soundtrack, sure to signal the apocalypse while cranking out some heavy metal tunes.

Immediately, from the two, back-to-back cold opens, Hellboy sets out to impress listeners by creating a wide and highly-engaging half-dome soundstage. While the music spreads evenly across and above the screen, various noises in the background travel into the sides and top heights. The surrounds are employed often with subtle atmospherics encircling the listening area, such as the rumbunctious cheers and jeers of the crowd at the wrestling match or the frightened screams of Londoners running through the streets. Ceiling channels are understandably reserved for the diabolical action, filling the room with debris raining down from above or swords pan overhead, creating an immersive hemispheric soundfield.

Imaging continuously feels broad and spacious while the mid-range exhibits superb distinction and clarity even during the loudest segments, displaying outstanding separation in both the action and orchestration. In fact, Benjamin Wallfisch's score enjoys a great deal of warmth and precision in every note while the song selections roar across the entire room with appreciable fidelity. Occasionally, dialogue can feel lightly drowned out by the action, especially in the case of Harbour, but vocals are clean and intelligible for the most part. The low-end is quite robust and commanding, providing the many action sequences with an authoritative, wall-rattling presence, especially the aforementioned all-out brawl against the giants. (Dolby Atmos Audio Rating: 96/100) 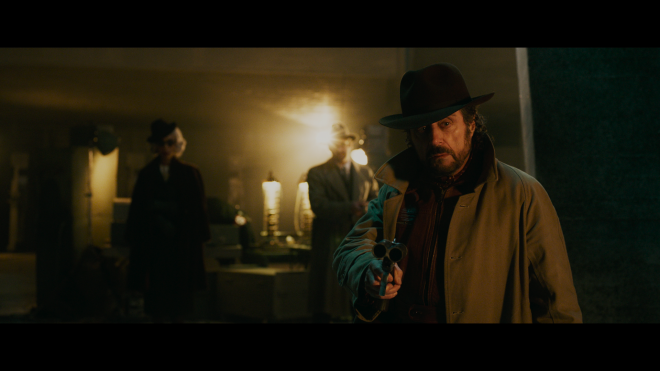 The same set of supplements from the Blu-ray are ported over to Ultra HD disc. 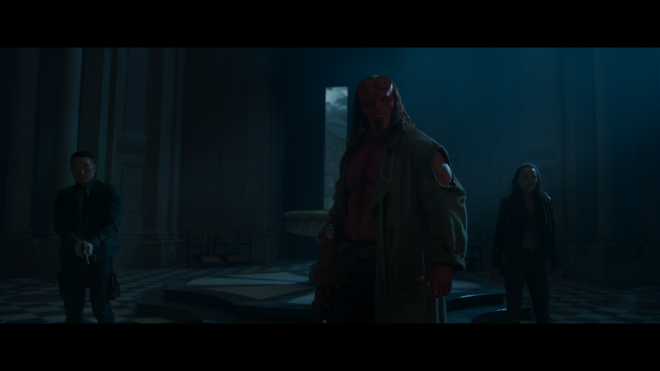 Summoned back to cinemas for the third time, Hellboy incites the apocalypse in this disappointingly dull and yawn-inducing adaptation of the popular Dark Horse Comics. Starring Milla Jovovich, Ian McShane and David Harbour as the titular character, the reboot fails to ignite interest in the devilish adventures of the horror-oriented antihero. The movie rides into Ultra HD with a great-looking Dolby Vision HDR presentation, offering a welcomed upgrade over the Blu-ray, and a demo-worthy Dolby Atmos mix. Although featuring a very small set of bonuses, the overall UHD package is nonetheless worth a look for devoted followers.

Sale Price 12.99
List Price 19.99
Buy Now
3rd Party 9.34
In Stock.
See what people are saying about this story or others
See Comments in Forum
Previous Next
Pre-Orders
Tomorrow's latest releases