Hellboy, Abe, and Liz return for a quest to prevent an Elven prince from taking over the earth with the help of an indestructible mechanical army. Hellboy II: The Golden Army fights its way onto 4K Ultra HD Blu-ray with a contrasty-but-soft 4K HDR10 video presentation, a bombastic DTS:X soundtrack that lacks refinement, and most of the bonus materials from the original Blu-ray. Recommended for fans with big 4K TVs, DTS:X systems, and LFE-geeks. 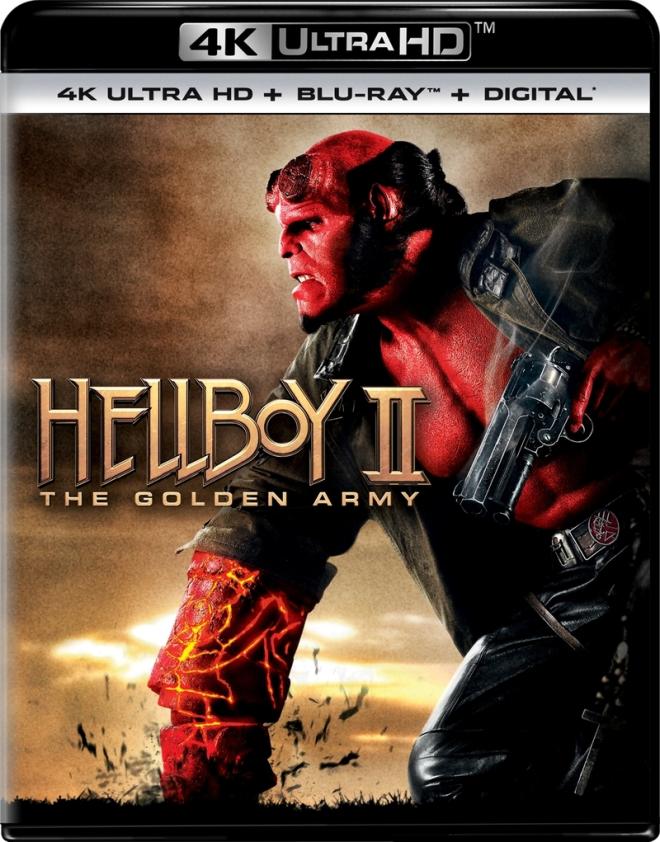 When an exiled Elven prince returns to steal his father's crown and resurrect the fiercest army the world has ever known, it's up to Hellboy, Liz, Abe, and the rest of the Bureau for Paranormal Research and Defense (B.P.R.D.) to protect a princess and save the world.

I'm not an avid Hellboy comics reader, but there's just something utterly enchanting about diving into a Guillermo del Toro universe. The Golden Army has all of the jokes and thrills and fireworks of a typical summer blockbuster, yet every single inch of every single frame seems packed with love. From the sets to the creatures to the characters, The Golden Army feels like a lived-in place and I enjoy returning to it for its horror and its beauty. As Josh Zyber noted in his original review 11 years ago, the film is definitely on the plotty side when we'd love to slow down and enjoy these characters, and when we finally to arrive at the film's climax, it's a little clunky, but I find the sequel's grand scale and wild imagination make it be a worthwhile follow-up to del Toro's first film.

The Golden Army debuts on Ultra HD Blu-ray as part of a two-disc 4K + Blu-ray + Digital combo pack. Housed in a standard black case, you'll find one BD-66, one BD-50, and a 4K digital code to redeem via Movies Anywhere. There are no pre-menu trailers on the UHD disc and, unfortunately, the disc offers no option to resume playback, making it a pain if you ever stop the movie. The included Blu-ray appears to be a copy of the original 2008 Blu-ray. 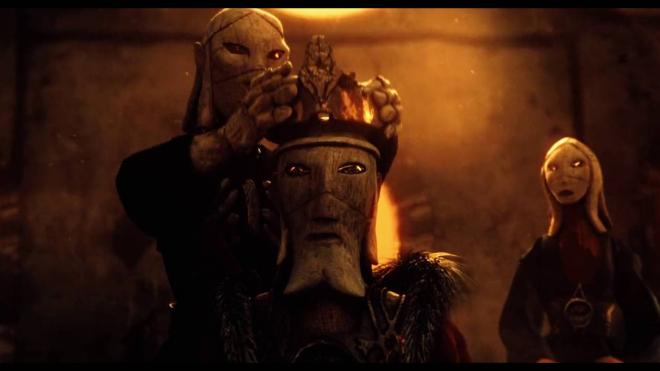 Hellboy II: The Golden Army returns to home video with a 2160p HEVC encode, HDR10 grading, and a 1.85:1 aspect ratio. It's a gorgeous movie to watch for all of its wondrous production design and creatures, but ultimately, inherently soft source materials prevent this from scoring higher against other Ultra HD movies.

As Josh Zyber noted in his 2008 review, "At its best, the picture has extraordinary sharpness and detail. Close-up shots of HB's skin reveal exemplary texture. However, image clarity is not always consistent. Medium and wide shots are generally less impressive and look a little filtered. The movie also has an abundance of CG effects that are disappointingly soft and blurry for a movie of this budget, especially the Golden Army robots themselves."

In bouncing between the new UHD disc and the old Blu-ray, everything Josh wrote in 2008 still applies. In fact, on smaller TVs, or without direct A-to-B comparisons, there's not much of a difference between the two transfers. Some shots look amazing, some shots don't; and the color grading is pretty similar.

But, if you look closely, you can see the enhanced contrast and dynamic range in the newer release. With deeper black levels, the CGI sets and creatures actually seem a touch more in-camera real. Wider shots benefit too, seeming sharper and more dimensional. And anytime there's an explosion or cloudy skies, you can see more highlight details. 4K colors too, though not radically different, are punchier than the Blu-ray which, by comparison, seems a little more drab and hazy.

Overall, the visual upgrade is minor, and it's a middling Ultra HD release compared to other comic book movies, but this is the best Hellboy II has ever looked. 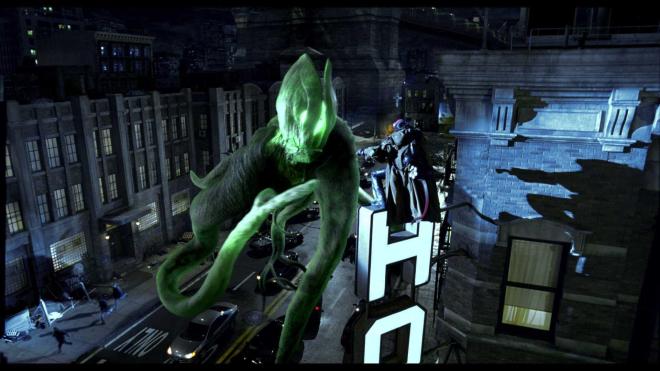 While Hellboy II boasts an aggressive, bass-heavy DTS:X sound mix that's sure to please fans and surround enthusiasts, the track lacks the articulation and refinement of the format's best mixes.

In general, there's a lot of love about The Golden Army in DTS:X. The original Blu-ray's 7.1 mix has always been a favorite of mine, for the way it delivers side and rear sound activity along with guttural LFE. This is a movie where you feel the stomping feet and mountainous roars each time a titanic creature appears. It's also a movie that swims in shrieking train tracks, rain, explosions, mechanical gears, and flying weaponry. Much like the original track, the new DTS:X mix delivers a flurry of deep bass and sound-effect activity while also adding overhead activity. And, much like the film's busy visuals, the sound designers craft individual sonic delights for each character. The dialog is also super crispy and clear, and the music does a nice job of rounding out the whole design.

Again, overall, this is a successful mix, especially if you like immersion and thumping subwoofers. I'm currently finishing up my time with the new Klipsch Reference Premiere speakers and dual SPL-120 subs (reviews coming soon!), and this DTS:X mix tested the hell out of the system's dynamic range.

That said, I happened to watch Hellboy II back-to-back with Black Hawk Down, which Moises Duarte recently reviewed for us HERE and features a similarly aggressive Dolby Atmos mix, but one that I find to be more articulate, refined, and better at using the overhead height channels to create a more realistic sonic hemisphere. In other words, The Golden Army is a bit more like a butcher where BHD has surgeon skills. Smaller sounds-within-sounds, more precise panning, and just a better sense of what these new object-based formats can do.

Still, despite a few reservations, the takeaway is that this new DTS:X track is a lot of fun and a clear upgrade over the Blu-ray's native 7.1 mix (or that mix plus up-mixing). 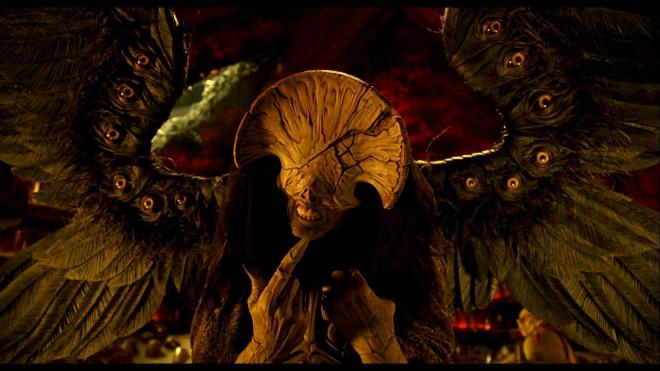 While the Hellboy II Ultra HD Blu-ray only includes the two audio commentaries, you can find the rest of the bonus materials on the Blu-ray disc. Universal has ported over everything that was on the Blu-ray from the 2008 combo pack. However, completists should note that the original set also had numerous special features on its DVD, which are NOT included here. 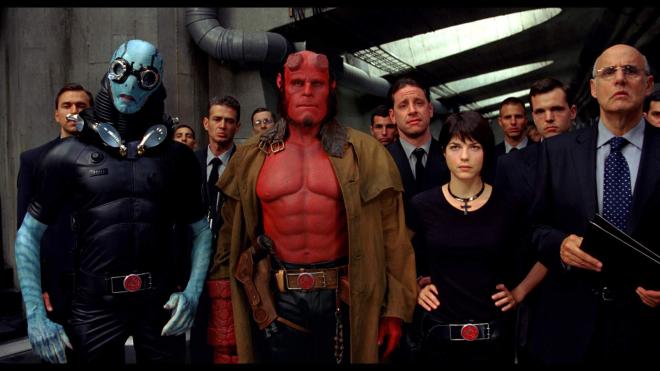 Guillermo del Toro's Hellboy II: The Golden Compass is big-budget studio filmmaking that feels handcrafted, where every square inch of it oozes with imagination. As a story, it feels a bit plotty at times, but if you enjoyed the first one, this feels like a worthy adventure and followup.

As a 4K Ultra HD Blu-ray, the results are a little mixed. Due to the inherent softness of the source materials -- both in the photography and CGI elements -- the 4K HDR10 picture isn't leaps and bounds better than the 11-year-old Blu-ray. Still, this UHD release is sharper and slightly more colorful, with better contrast and more highlight details. The DTS:X sound mix is a more obvious upgrade, delivering authoritative and active immersion with lots of LFE. But the Special Features selection actually takes a step backward from the previous release, having dropped the DVD-exclusive supplements altogether.

Recommended for those with bumpin' DTS:X surround systems and the largest 4K displays. If you have a ~60" or smaller 4K set, or you don't have X capabilities, stick with your Blu-ray.