With skill and stylized camerawork that never feels cheap, Ridley Scott's Black Hawk Down is a terrifying portrait of war and the brotherhood between soldiers. The 4K Ultra HD Blu-ray crash lands with a gorgeous HDR10 presentation and an immersive Dolby Atmos soundtrack, and the same set of supplements are joined by a few new surprises. Still, the overall package is Highly Recommended.

Black Hawk Down is part of Ridley Scott's "grim-and-gritty" period at the turn of the century where his films took on a stylized, unromantic and heavily grainy appearance, which started after working with cinematographer John Mathieson on Gladiator. In this combat actioner, based on the non-fiction novel by journalist Mark Bowden, the look is especially dirty, rough and coarse, probably because the director of photography Slawomir Idziak was trying to imitate Mathieson but it came out slightly more exaggerated. Whatever the case may be, the point is I appreciate Idziak's efforts because the "grim-and-gritty" aesthetic actually suits the plot perfectly, admirably encapsulating the terrifying experience of war while also establishing a sense of urgency and tension during the many character-driven moments. Almost twenty years later, the film remains a visceral, riveting tale about the strong brotherhood bond between soldiers and the courage to survive against the bleakest odds. 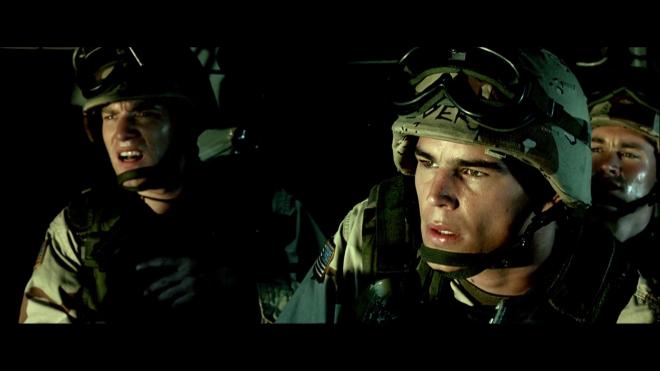 For a more in-depth take on the film, check out our original Blu-ray review HERE from 2006.

Sony Pictures Home Entertainment brings Ridley Scott's Black Hawk Down to Ultra HD Blu-ray as a three-disc combo pack with a flyer for a Digital Copy, which can be redeemed via sonypictures.com and MoviesAnywhere. When redeeming said code, users have access to the theatrical version in 4K HDR10 and Dolby Digital audio on certain streaming platforms. The triple-layered UHD100 disc sits comfortably atop the same Region Free, BD50 disc as the previous release while a second Region Free, BD50 disc is on the opposing panel containing a new set of bonus features. All three discs are housed inside a black, eco-elite vortex case with a glossy slipcover. At startup, the disc goes straight to an interactive main menu that changes screens when switching between the usual options while music plays in the background.

The Ultra HD Blu-ray houses both the 152-minute extended cut as well as the 144-minute theatrical cut, while the included Blu-ray only features the theatrical cut.

The combat actioner crash lands in the hostile territory of Ultra HD equipped with a stunningly gorgeous yet rough and gritty HEVC H.265 encode, amazingly leaving its Blu-ray brethren behind and marching on as the winner in this unexpected fight. Reportedly made from a brand-new remaster of the original camera negatives, this 2160p transfer charges forward with considerably sharper definition, exposing the smallest thread in the uniforms and the wear and tear in the guns and various vehicles. Every piece of debris and dirt flying everywhere is distinct, and the tiniest crack, flaw, and imperfection in the buildings are plainly visible even from a short distance. Close-ups of the cast are often extraordinary, revealing every pore, wrinkle, and blemish with striking clarity and lifelike textures.

Although Slawomir Idziak's highly-stylized photography exaggerates the teal-orange look to the extreme, greatly limiting the selection of colors by significantly skewing the palette towards oranges and yellows, the 4K video is nonetheless faithful to those creative intentions. As daylight exteriors are continuously bathed in a mix of canary, butter, mustard, and golden yellows, the hot, humid climate of the region now feels more stifling, sweltering and oppressive while the sky is an attractive cerulean blue. In fact, nighttime sequences are overwhelmed by an array of overbearingly tense blues while explosions flood the screen in vibrant, fiery-red oranges. Meanwhile, reds and greens are fuller and richer than the Blu-ray, and facial complexions now appear more accurately sunburnt and tan.

At first, the HDR10 presentation doesn't seem dramatically brighter than its HD SDR counterpart, which likely has much to do with the stylized cinematography. But contrast has nonetheless received a noticeable boost, displaying cleaner, crisper whites throughout. Better still, viewers will quickly note the massive improvement in the specular highlights, most notably the way light brilliantly glistens off each bead of sweat on the faces of the actors. The glare from the sun is also tighter and narrower, allowing for more, sharper details within the hottest areas. On top of that, black levels are inkier and far richer than on Blu-ray, which in turn also makes for a slightly darker picture overall. Still, shadows are silkier and velvety without sacrificing visibility within the murkiest corners, and while awash in a thick, coarse layer of grain from start to finish, the 2.35:1 image appears very film-like. (HDR10 Video Rating: 88/100)

All-out war erupts on the screen thanks to a fantastically awesome Dolby Atmos soundtrack that, while providing a noteworthy improvement over its uncompressed PCM counterpart, doesn't quite compare to some of the more aggressive and consistently active object-based tracks currently available.

Nevertheless, we're talking about an action-packed war movie that more than satisfies where it counts and is sure to give everyone's sound system a great workout. Battle sequences are layered with a medley of chaotic noises spreading into pretty practically every corner of the room, placing viewers right smack in the center of the terrifying fracas. Debris often comes showering from above and landing all around, bullets whizz by in every direction and overhead the listening area, helicopter blades fill the entire room with surprising realism, and the echoes of screams ring everywhere, surrounding the listener with the mayhem of war, a bedlam of confusion and utter pandemonium.

Still, a good portion of the story is a character-driven drama with priority given to the soft-spoken dialogue and various conversations, along with the constant yelling and screaming. The loudest, most turbulent sequences maintain superb clarity thanks to a remarkably sharp and detailed mid-range. The front soundstage feels broad and spacious with a great sense of presence, as an assortment of noises fluidly pans between all three channels and into the front heights, creating a highly-engaging half-dome environ. The swarming, busy commotion of the Somalian city fills the sides and rears, but the chaotic anarchy of war envelops the listener with the cries of wounded soldiers, bullets ricocheting everywhere and the blasts of gunfire in the distance, generating an awesomely immersive 360° soundfield.

As would be expected from a war movie, a thunderous, authoritative low-end provides a robust, wall-rattling impact and presence to every explosion, sure to disturb the neighbors. But this sound design holds a special place in the hearts of bassheads everywhere because one scene, in particular, has served as the go-to demo clip for showcasing the capabilities of one's subwoofer. The "F**king Irene!" scene — just a little after the 37-minute mark — remains an awesome, room-pressurizing listen, reaching down to 5Hz with serious decibels, which could potentially ruin a sub while the majority of other subs don't even know it's there (bass chart). In either case, the object-based presentation is simply fantastic. (Dolby Atmos Audio Rating: 94/100)

The package not only ports over the same bonuses as before but also offers a few new surprises, all of which can be enjoyed on the third Blu-ray disc.

Black Hawk Down is a harrowing, character-driven tale about survival and the brotherhood between soldiers which still resonates with audiences today, nearly twenty years later. Based on the nonfiction book of the same name and the Battle of Mogadishu, Ridley Scott captures the terrifying chaos of war and the complexities of military involvement with proficient talent and stylized camerawork that never feels cheap or gaudy flamboyance.

The combat actioner crash lands on 4K Ultra HD Blu-ray with a gorgeous HDR10 video presentation that surpasses its Blu-ray counterpart and a satisfyingly immersive Dolby Atmos soundtrack. Porting over the same set of supplements as its predecessor, the overall package is highly recommended, making an awesome addition to the UHD library.

Sale Price 13.33
List Price 30.99
Buy Now
3rd Party 8.25
In Stock.
See what people are saying about this story or others
See Comments in Forum
Previous Next
Pre-Orders
Tomorrow's latest releases