Director Justin Lin returns for Fast Five, a fun heist flick that shifted the franchise into melodramatic action serial uniting Vin Diesel and Paul Walker with Dwayne Johnson. The movie breaks into the 4K Ultra HD Blu-ray vaults equipped with an excellent HDR10 presentation and a reference-quality DTS:X soundtrack. Overall, UHD package is a Highly Recommended upgrade for fans of the franchise.

For fans of the franchise, Fast Five is the entry that changed everything, modifying it from the car-racing thrill ride of its four predecessors to the high-octane, full-throttle action spectacular moviegoers now love. Whereas Fast & Furious essentially reimagined the plot of the original as a grindhouse revenge thriller, the fifth installment shifts gears and races into familiar heist movie territory in the vein of Ocean's Eleven. This is also the entry where director Justin Lin and writer Chris Morgan take a chance and fully embrace the absurd, absolute bonkers premise of the franchise, diving into insane, over-the-top, balls-to-the-wall but nonetheless visually striking and thrilling action stunts with giddy delight.

With Vin Diesel, Paul Walker and Jordana Brewster reprising their roles, the larger story begins to take shape, stringing together the previous movies as a continuation and result of those events. The return of Tyrese Gibson, Ludacris, Matt Schulze, Gal Gadot and most importantly Sung Kang as members of the Toretto crime crew basically makes clear this installment is fixing the Tokyo Drift timeline. At the same time, Lin and Morgan are slowly establishing the movies into something reminiscent of classic Hollywood serials with an 80s action blockbuster flair — where each entry is the latest adventure with familiar beloved characters, albeit of the antihero variety. The story also introduces Dwayne Johnson as the tough-as-nails Diplomatic Security Service agent Luke Hobbs, marking the start of a grander expanded universe. 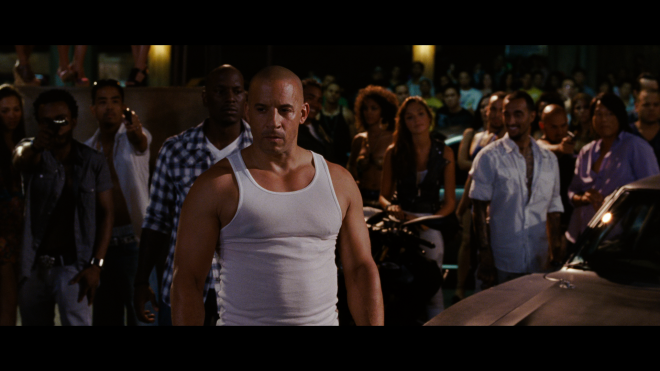 For a more in-depth take on the film, check out Aaron Peck's review of the 2011 Blu-ray HERE.

Universal Studios Home Entertainment brings Fast Five to 4K Ultra HD Blu-ray as a two-disc combo pack with a Digital Copy code. When redeeming said code via Universal's website or Movies Anywhere, users have access to the "Extended Version" of the movie in 4K HDR10 with Dolby Digital Plus 5.1 audio on various streaming platforms. The dual-layered UHD66 disc sits comfortably opposite a Region Free, BD50 disc inside a black, eco-elite case with a slipcover. At startup, the disc goes straight to a menu screen with the usual options in the top-left corner, full-motion clips and music playing in the background. The Extended Version adds one minute to the 130-minute theatrical cut, and both are available on the Ultra HD disc when selecting the "Play" on the main menu screen. 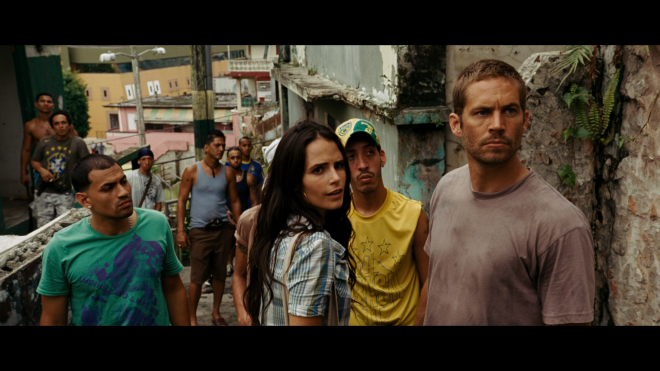 The crew infiltrates the top-notch security vaults of Ultra HD equipped with an excellent and largely beautiful looking HEVC H.265 encode, easily beating out its Blu-ray competition in a fair match.

Shot on traditional 35mm cameras but later mastered to a 2K digital intermediate, the 2160p picture shows a slight uptick in overall definition and great clarity in the many action sequences. Some of the background information in the warehouse is a bit clearer, the design of various vehicles is sharper, and the small imperfections in the Brazilian neighborhoods are a tad more detailed and even striking in a few spots. Facial complexions, especially, are most impressive, revealing the most negligible blemish and pore during many of the close-ups. However, the upscaled transfer comes with its fair share of softer, poorly-resolved moments, mostly related to the CG visuals or a few of the nighttime sequences. Some of the sharpest edges also tend to flicker, and there is some visible moiré in the blinds, a smidge in the brick walls and on Hernan Reyes's necktie.

Those areas are easy to overlook though when this 4K vehicle is performance-enhanced with much better contrast and brightness, displaying a nicer, more vivid picture throughout, giving the exotic locales a striking picturesque appeal in the daylight. The whites in clothing and light fixtures are more vibrant and energetic, and specular highlights, in particular, glow with an intense crispness, supplying metallic objects and surfaces with a realistic shine. The hottest spots, such as the sun's rays reflecting off faces or the ocean, radiate with tighter, narrower splendor without sacrificing the finer details. Some demo-worthy moments are the convoy attack and the actual heist when the team races through the streets with the vault. Viewers can make out the minute features in the plumes and smoke of the sudden bursts of explosions.

Also, black levels are notably richer and inkier with outstanding gradational differences and strong shadow detailing, providing the 2.35:1 image with a beautiful cinematic quality and some amazing, lovely scenes of the city skyline at night. On the other hand, the video is comparatively darker than its HD SDR counterpart, occasionally making it a tad difficult to make out some aspects within the darkest, gloomiest corners. But the best part of this HDR10 presentation is the improved, wider palette in the cinematography. Granted, Stephen F. Windon's orange-teal photography favors warmer yellow hues, giving the action a hotter feel to match the tropical climate with lots of rich browns and amber, fiery oranges. At the same time, the reds and blues of cars and police lights are also fuller and more lively while facial complexions are rosier and more accurate to the weather. (HDR10 Video Rating: 84/100) 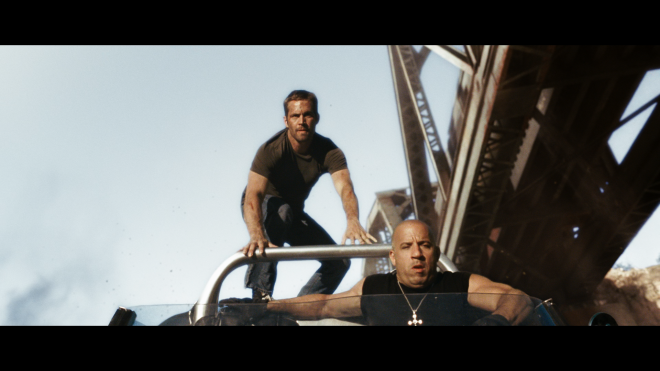 The fifth installment comes barreling down the road and crashing into home theaters with a spectacularly awesome, reference-quality DTS:X soundtrack, adding several super-charged enhancements to an already amazing Blu-ray.

It doesn't take long before the movie kicks into high gear and suddenly throttles viewers into the middle of the action, as the opening escape sequence fills the room with debris scattering in every direction and a prison bus spins through the air. From there, the object-based mix frequently utilizes all the speakers with background activity fluidly moving across three front channels and into the top heights for a fantastically engaging half-dome wall of sound while the sides and rears expand those atmospherics to fully envelop the listener. Helicopters are often flying overhead, flawlessly panning from one side of the room to the other and generating a truly immersive hemispheric soundfield. The score and songs bleed all around, keeping the story animated and constantly moving, while gunfire and engines echo everywhere.

As mentioned above, the movie pretty much erupts into edge-of-your-seat action right from the start with imaging that continuously feels wide and expansive, as off-screen noises distinctly bounce across the entire soundstage. Vehicular mayhem explodes across the screen with flawless, fluid movement while the mid-range maintains extraordinary detailing, reaching room-penetrating highs with crystal-clear clarity and superb distinction in the mids. At the same time, the dialogue is always pristine and intelligible in spite of the loud action and the tumultuous destruction of the Brazilian streets. The low-end packs a serious oomph and potency to every explosion, gunshot and rumbling growl of engines while the songs dig deep into the lower depths on a few occasions. (DTS:X Audio Rating: 100/100) 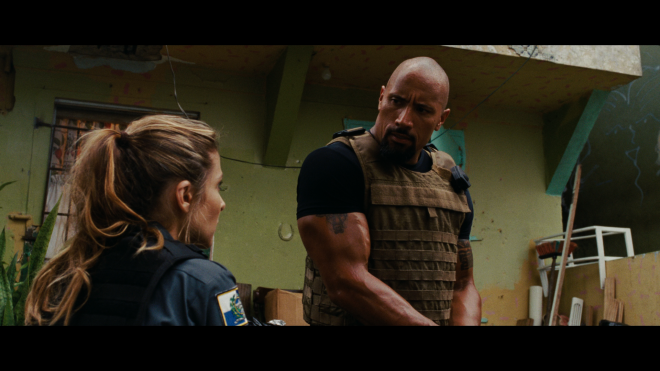 The accompanying Blu-ray is identical to the 2011 release with the same set of supplements. 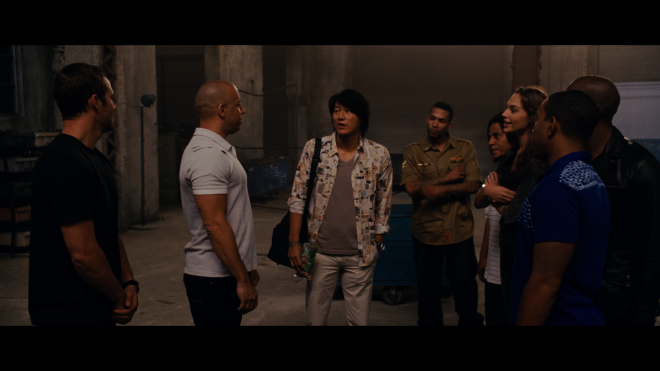 Director Justin Lin and writer Chris Morgan reunite for the awesomely fun and visually spectacular Fast Five, the fifth installment that shifted gears about illegal street racing subculture to a high-octane heist film. Reuniting Vin Diesel and Paul Walker, the movie is also the start of the franchise as a melodramatic action serial, establishing the Toretto crew while expanding into a larger universe with Dwayne Johnson. The movie breaks into the Ultra HD vaults equipped with an excellent 4K HDR10 presentation and an exciting, reference-quality DTS:X soundtrack. Although porting over the same bonus features as before, the overall UHD package is a worthwhile, highly recommended upgrade over its Blu-ray counterpart.

Sale Price 18.87
List Price 29.98
Buy Now
3rd Party 14.89
In Stock.
See what people are saying about this story or others
See Comments in Forum
Previous Next
Pre-Orders
Tomorrow's latest releases