The Fast and the Furious: Tokyo Drift may be the black sheep in the family, but it nonetheless holds its own with some cool racing action and a decent story that essentially kicks the franchise into an awesome film serial. The second sequel oversteers into Ultra HD with an excellent 4K HDR10 presentation and a highly satisfying DTS:X soundtrack, but packing the same set of supplements. Still, the UHD package is a Recommended improvement.

Although largely dismissed as the black sheep of the tight-knit Fast & Furious family, Tokyo Drift has nonetheless earned its place within the world of car-themed crime thrillers, managing to deliver a decently satisfying actioner. Admittedly, it's not a particularly good or memorable movie, ranking low or the weakest in the franchise. Despite the focus on the street-racing subculture similar to its two predecessors, the lack of Vin Diesel and Paul Walker is sorely felt in what basically amounts to a soft reboot of the franchise. Starring Lucas Black and hip-hop artist Bow Wow, the competent but predictably formulaic story is simply there in service of the visuals and some cool racing action, which is ultimately the reason for watching this.

More importantly, Tokyo Drift is appreciated for bringing director Justin Lin (Star Trek Beyond) and writer Chris Morgan into the Furious fold, as they are the collaboration team responsible for eventually turning the franchise into an awesome film serial. Of course, it takes them a couple more tries before finally arriving there. But in revisiting all the movies, it's actually pretty cool to see how Lin and Morgan course-correct the series, starting with Diesel's unexpected cameo at the end. Originally intended as a wink and a nod connecting this third entry to the car-themed action franchise, Dominic announcing Han Lue (Sung Kang) was family is a small misstep in the timeline requiring an explanation in the coming sequels. 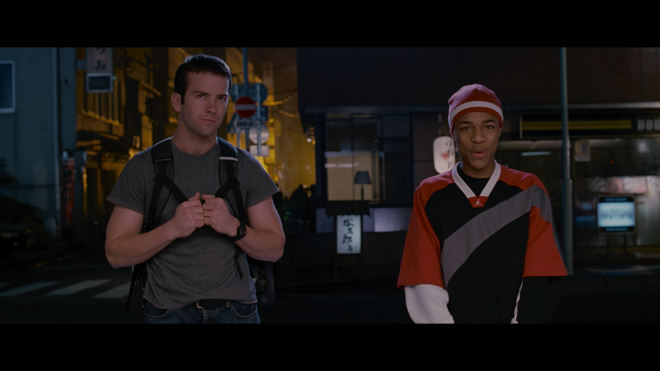 For a more in-depth take on the film, check out our review of the 2009 Blu-ray trilogy HERE.

Universal Studios Home Entertainment brings The Fast and the Furious: Tokyo Drift to 4K Ultra HD Blu-ray as a two-disc combo pack with a Digital Copy code. When redeeming said code via Universal's website or Movies Anywhere, users have access to the 4K HDR10 version with Dolby Digital Plus 5.1 audio. The dual-layered UHD66 disc sits comfortably opposite a Region Free, BD50 disc inside a black, eco-elite case with glossy slipcover. At startup, the disc goes straight to a menu screen with full-motion clips, the usual options along the top left corner and music playing in the background. 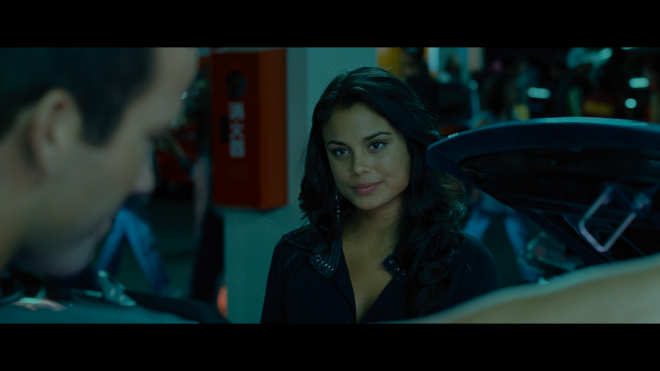 The third franchise entry drifts into Ultra HD with a tricked-out and mostly good-looking HEVC H.265 encode. However, compared to its Blu-ray rival, the 4K release just barely ekes out a win. In fact, this 2160p transfer, upscaled from a 2K digital intermediate, is perhaps the weakest in the muscle-car lineup, looking a bit softer than the others with several poorly-resolved sequences sprinkled throughout, most notably during the panoramic aerial shots of the city. Nevertheless, the overall picture enjoys a welcomed uptick with slightly better definition in the clothes, buildings and of various vehicles. The racing action maintains great clarity, as well.

Also, black levels are appreciably richer, showering many scenes with excellent, silky shadows while bathed in a consistent thin layer of natural grain, providing the 2.35:1 image with a lovely film-like quality. On the other hand, delineation within the darkest corners could be stronger, and there seems to be a smidge of very mild, easy-to-miss posterization in the faces of some cast members during nighttime scenes with lots of heavy shadows. Moreover, contrast doesn't show a major upgrade, but the 4K presentation is certainly brighter with slightly crisper whites in many spots, making city lights a bit more resplendent and brilliant. But it's not by much when compared to the HD version or other UHD releases of similar quality, and specular highlights provide an attractive gloss and sparkle along the cars but significantly better detailing.

Overlooking some of those issues, the HDR10 presentation is nonetheless a win, boasting an improved and a bit more brilliant palette. Twinkie's Hulk-themed car has a glossy, shamrock finish that's near-cartoonish while Han's Nissan S15 is a deep admiral blue with a vibrant tiger orange strip. Other vehicles animate the movie and action with an eye-dazzling array of sumptuous candy reds, sleek chrome yellows, chartreuse greens and a surprising variety of grays, like the shiny charcoal of the Mustang versus the combo of smoke, ash, and blacks of Takashi's Nissan 350Z. At the same time, facial complexions are a tad more revealing with rosier, more natural tones in the entire cast, making a nice win. (HDR10 Video Rating: 76/100) 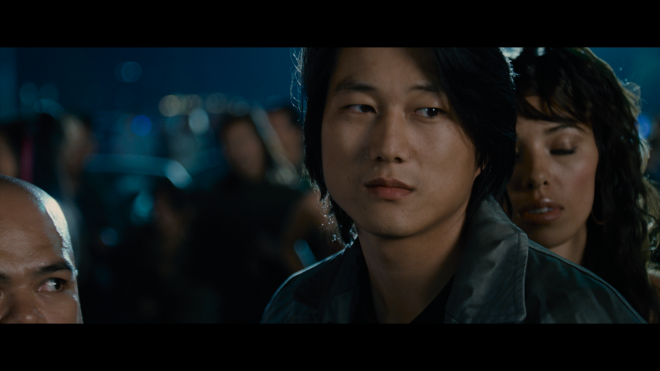 Rolling out of the audio garage, Tokyo Drift cruises into home theaters with a supercharged and ridiculously thrilling DTS:X soundtrack, sporting a fantastic upgrade over its DTS-HD counterpart. Admittedly, the first quarter of the movie taking place in Arizona doesn't immediately jump out and impress, but once in the fast-paced streets of Tokyo, viewers are thrust into the action, as random traffic noise travel throughout the surrounds. Other effects subtly and flawlessly pan from the fronts to the sides and rears to create an awesome sense of envelopment. Of course, this isn't always a consistent feature, as several gaps of silence can be somewhat apparent, but the room kicks into high, ear-screeching gear when Sean enters the world of drift racing. While the music bleeds across the ceiling channels, atmospherics move through the overheads, enhancing the visuals into a subtle hemispheric soundfield.

In addition to the awesome use of the surrounds, the design benefits from the extra-breathing room with a broader, more spacious soundstage. Background activity convincingly and fluidly moves between the three front channels and into the top heights, generating a highly-engaging half-dome wall of sound. The ear-piercing noise of engines screech and howl through the streets of Tokyo, echoing all around with outstanding clarity and separation in the mid-range while the score and song selections enjoy outstanding fidelity and warmth. At the same time, conversations are crystal clear and precise, never drowned out by the loudest action sequences, of which there are many. And better still, the low-end is phenomenal and aggressive, providing the songs with a punchy, room-energizing bass that plummets into the lower depths on several occasions while the grumbling engines with hefty, palpable weight. (DTS:X Audio Rating: 94/100) 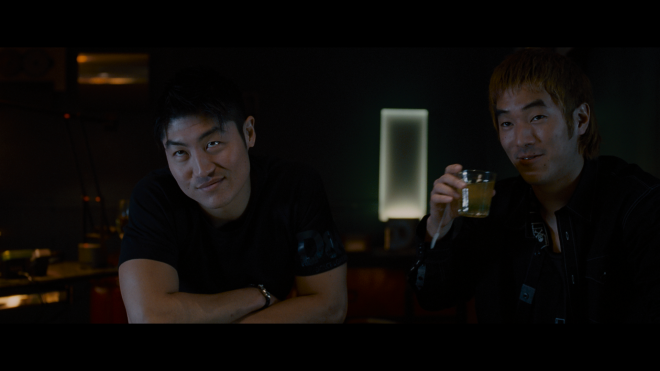 The same set of bonuses are ported over and available on the accompanying Blu-ray disc. 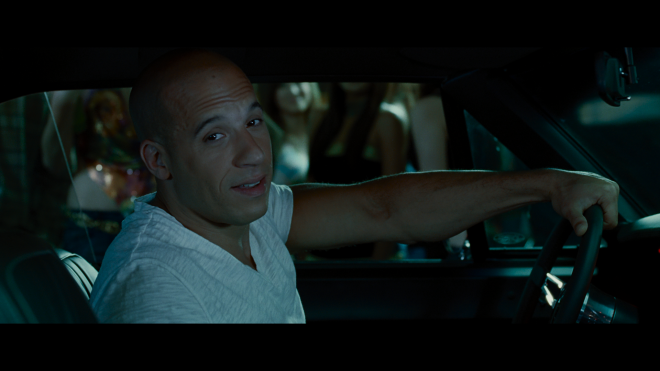 Although considered the weakest link in the franchise by most, The Fast and the Furious: Tokyo Drift is nonetheless appreciated for uniting director Justin Lin with writer Chris Morgan while also introducing fans to Han and the art of drifting. But aside from that, the third installment to the series nonetheless makes for a fun, action-packed night. The second sequel oversteers into Ultra HD home theaters with an excellent 4K HDR10 presentation that boasts some welcomed modifications over the Blu-ray and sleekly enhanced by a highly satisfying DTS:X soundtrack. Packing the same set of bonus material underneath the hood, the overall UHD package is a recommended improvement.

Sale Price 24.99
List Price 29.98
Buy Now
3rd Party 9.73
In Stock.
See what people are saying about this story or others
See Comments in Forum
Previous Next
Pre-Orders
Tomorrow's latest releases