The Fast and the Furious - 4K Ultra HD Blu-ray

Featuring one of Vin Diesel's best and most memorable roles, The Fast and the Furious is ultimately an excuse to see lots of fast cars, enjoy some vehicular mayhem and make street racing look legitimately cool, which it does successfully. The crime thriller drives up to the 4K Ultra HD racecourse with a spiffy HDR10 makeover, an excellent DTS:X soundtrack and the same set of supplements as the Blu-ray. Overall, UHD package is Recommended.

What is it about watching car crashes on screen that endlessly fascinates moviegoers? They are the auto-mechanical equivalent of slasher movies, and you'd think that there would only be so many ways to destroy a car. Yet we continue to flock to these movies, our appetite to see all makes and models of automobile crashed, smashed and blown to bits apparently insatiable.

Perhaps the best piece of car porn ever put on screen, the original The Fast and the Furious remains the best of the [massively successful] franchise. The story is a fairly formulaic crime thriller, but who needs plot when you have lots of good-looking people driving fast cars and blowing things up? Paul Walker stars as undercover cop Brian O'Conner. He's assigned to infiltrate the underworld subculture of Los Angeles "street racing," where impossibly good-looking teenagers (who all apparently have unlimited financial resources) jack up hot cars and challenge each other to death-defying, late-night competitions. O'Conner befriends the king of the circuit, Dominic Toretto (Vin Diesel), but will soon question that loyalty when Toretto and his posse become the prime suspects in a car hijacking ring. Eventually, O'Conner will have to put his newfound street racing skills to the test if he's going to bust the thugs, get the girl, and beat Toretto at his own game. 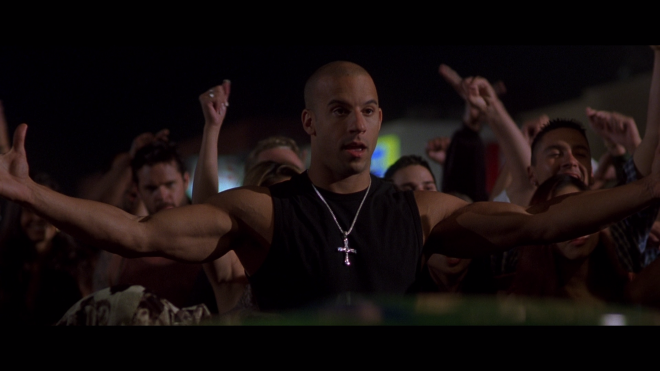 The Fast and the Furious is not a movie that appeals to the intellect. But what it does, it does fabulously. Action über-meister Rob Cohen (xXx, Stealth) directs with the gas pedal pressed all the way to the floor. The lighting, the music, the editing and the action are all pumped to the max, so the film is pure audiovisual eye candy. Take the scene where a group of feds bust in on the lair of Johnny Tran (Rick Yune). Cohen stages the scene like a music video with a blaring neo-industrial song on the soundtrack, lots of slo-mo, and not a single word of dialogue. No, this is not art on the level of European mise-en-scène, but I still have to hand it to Cohen. He revels in telling his stories as pure cinema (even if it is of the MTV variety), and so — unlike most of his contemporaries — he at least has a consistent stylistic aesthetic to critique.

Then there is the action. Though I found the early street racing scenes the least interesting and most far-fetched, The Fast and the Furious really kicks into gear in the second half. There is one extended sequence involving a careening semi-truck that remains one of the most exciting action sequences I've seen. I also liked the climactic daytime street race between Diesel and Walker, which is truly white-knuckle viewing. There is something to be said for pure entertainment movies like The Fast and the Furious, which elevate a threadbare plot and clichéd characters through sheer force of their style, and turn out to be far better than they have any need to be. As far as car-porn films go, this one is up there on my top five list with Bullitt, The Road Warrior and Speed, regardless of how stupid it may be.

Universal Studios Home Entertainment brings The Fast and the Furious to 4K Ultra HD Blu-ray as a two-disc combo pack with a flyer code for a Digital Copy. When redeeming said code via UPHE.com and Movies Anywhere, users are given access to the 4K HDR10 version with 5.1 Dolby Digital Plus. The dual-layered UHD66 disc sits comfortably opposite a Region Free, BD50 disc inside a black, eco-vortex case with a glossy slipcover. At startup, the disc goes straight to the usual menu window with options along the left-side of the screen, full-motion clips and music playing in the background.

Sporting some serious mods to an already good-looking vehicle from 2009, the car-themed crime thriller enjoys a spiffy makeover thanks largely to a fresh paint job of a great-looking HEVC H.265 encode. Definition doesn't quite make the nice, clean jump fans were likely hoping for, but it crosses the finish line with a welcomed uptick, showing slightly improved details throughout. Viewers can better make out the cool design and features of each car, every nook and cranny of the Toretto house is exposed, and facial complexions are revealing with excellent lifelike textures during close-ups. Originally shot in traditional 35mm film, the 2160p transfer comes with its fair share of soft, somewhat poorly-resolved moments, but thankfully, it's nothing too egregious and the picture is awash in a thin layer of natural grain, giving it a nice film-like appearance. Black levels are also notably richer, giving several of the vehicles a silky, eye-catching polish, especially Dominic's 1970 Dodge Charger, and strong shadow detailing provides appreciable dimensionality.

Presented in its original 2.39:1 image, the 4K presentation displays outstanding contrast compared to the Blu-ray, showing brighter, crisper whites throughout. Many of the vehicles, in particular, come with an awesome gloss that beams in the sun while the shiny, gray-lining of decals have a brilliant glaze. Of course, it helps that specular highlights are one of the most attractive features of this HDR10 video, providing those cars, their decals and metal trimmings with a radiant, glistening sparkle without sacrificing the finer details. Meanwhile, the various colors of the supped-up cars shine and pop with intense brilliance. The greens, reds and blues dazzle the screen with a richer, sumptuous glow than its HD SDR counterpart. At the same time, secondary hues also appear more resplendent with a bit more variation in the palette, and the tangerine oranges, butter yellows, chartreuse greens and cerulean blues of cars are some of the movie's flashiest moments while flesh tones appear rosier and more natural to the Southern California climate. (Video Rating: 76/100)

The supercharged actioner takes to the Ultra HD racecourse with a fantastic DTS:X soundtrack, but compared to its DTS-HD MA counterpart, it comes in second. That is not to say or suggest this object-based option is severely lacking or falls short of excellence because the track crosses the finish line with satisfying results. As awesome as it is, however, it only offers minor improvements over its predecessor with a few atmospherics here and there traveling to the ceiling channels, nicely enhancing the action into a very subtle hemispheric soundfield. Occasionally, the design feels immersive in a couple moments, but it's not very consistent, leaving noticeable gaps of silence from time to time. The track's greatest strength is in the surrounds where various effects flawlessly pan from the fronts to the sides and rears, better enveloping the listening area.

Better still, the soundstage benefits from a slightly broader, more spacious presence as background activity convincingly moves across the screen, generating a wide and highly-engaging environ. Some of that ambient noise and the echo of the roaring engines running through the streets expands into the front heights, creating an amusing half-dome effect. The mid-range comes with a bit more clarity and separation during the loudest segments while the music and song selections enjoy outstanding fidelity and warmth. Meanwhile, dialogue is crystal clear and precise from beginning to end and never drowned out by the vehicular mayhem. Frankly, the low-end doesn't appear to improve much, which is not a bad thing since the booming, grumbling engines come with hefty, rumbling vibrations and explosions thrill with a punchy, bombastic oomph. (Audio Rating: 86/100)

Aside from the commentary track, all the special features are located on the Blu-ray.

Frankly, due to its absurdly simplistic script, The Fast and the Furious is ultimately an excuse to see lots of fast cars, enjoy some vehicular mayhem and make street racing look legitimately cool. And funny enough, the movie succeeds on that end, still entertaining after all these years and featuring one of Vin Diesel's best and most memorable roles thanks to a Point Break­-lite plot that doesn't demand much of its cast. The crime thriller enjoys a spiffy makeover on 4K Ultra HD, offering an improved and enhanced performance vehicle that leaves its HD SDR counterpart in the dust while revving an excellent DTS:X soundtrack under the hood. With the same set of supplements as the Blu-ray, the overall UHD package is Recommended for fans looking to upgrade their previous HD edition.

Sale Price 18.39
List Price 29.98
Buy Now
3rd Party 9.95
In Stock.
See what people are saying about this story or others
See Comments in Forum
Previous Next
Pre-Orders
Tomorrow's latest releases