Although lacking the gruff presence of Vin Diesel, 2 Fast 2 Furious makes for a fun and decently entertaining follow-up to the original furiously fast car-themed actioner. Starring Paul Walker, the plot is ultimately a repeat of the first, but it nonetheless sows the seeds for continuing and expanding the series. The sequel speeds unto the streets of Ultra HD with a gorgeous-looking HDR10 presentation, leaving its Blu-ray counterpart in the dust, along with an excellent DTS:X soundtrack that delivers the thrills. Porting over the same set of supplements as before, the overall package makes a Recommended addition to the UHD library.

Picking up some time after the events of The Fast and the Furious, audiences are reintroduced to Brian O'Conner (Paul Walker) in 2 Fast 2 Furious with the sort of gaudily tasteless but nonetheless eye-catching flair we've come to expect from the franchise. In fact, this John Singleton production is the movie that started sowing the seeds for the rest of the series although that was not the original plan. Despite Vin Diesel being out of the picture, the first sequel is ultimately a repeat of its predecessor, except O'Conner is now living as a wanted criminal and earning cash in illegal street racing. With the promise of wiping his record clean, the former undercover cop once again must infiltrate a dangerous criminal organization while under the guise of a car racer. Still, it's a fun and decently entertaining follow-up, delivering plenty of amplified action-packed car mayhem. Most importantly, it's the story that brings Tej Parker (Ludacris) and Roman Pearce (Tyrese Gibson) into the fold. 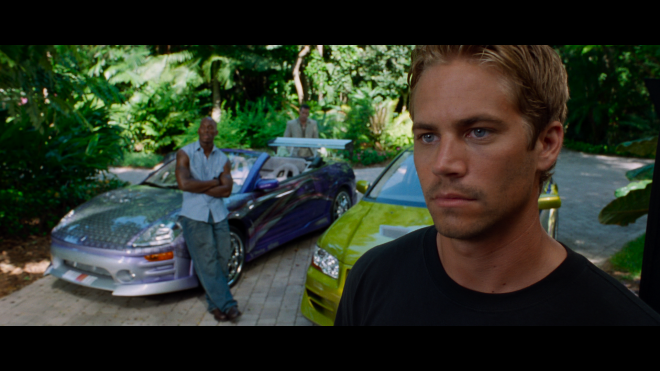 For a more in-depth take on the film, check out our review of the 2009 Blu-ray trilogy HERE.

Universal Studios Home Entertainment brings 2 Fast 2 Furious to 4K Ultra HD Blu-ray as a two-disc combo pack with a Digital Copy code. When redeeming said code via Universal's website or Movies Anywhere, users have access to the 4K HDR10 version with Dolby Digital Plus 5.1 audio. The dual-layered UHD66 disc sits comfortably opposite a Region Free, BD50 disc inside a black, eco-elite case with a slipcover. At startup, the disc goes straight to a static screen with the usual options along the bottom and music playing in the background. 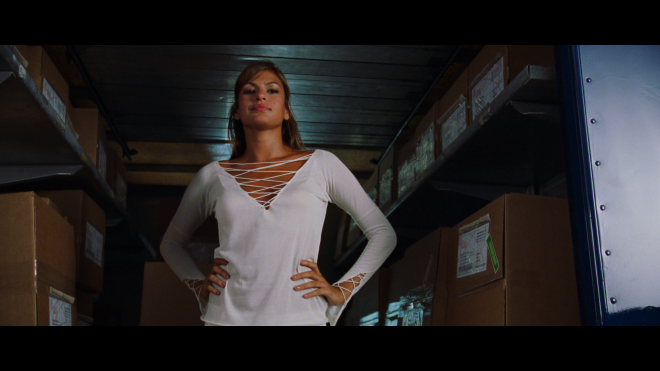 The action sequel races across the Ultra HD finish line with a souped-up, gorgeous-looking HEVC H.265 encode that runs circles around its Blu-ray predecessor. Originally shot on traditional 35mm film and reportedly mastered to 4K digital intermediate, the 2160p transfer sports slightly sharper definition and clarity of the many Florida locations and various vehicles. It's not a massive jump over the HD version, but it's definitely a welcomed uptick, better exposing the unique, chic body design of each car while facial complexions reveal pores and minor blemishes with lifelike textures. However, it also comes with its fair share of soft and poorly-resolved moments, most notably during extreme wide shots and in some of the CG visuals. Nevertheless, awash with a fine layer of grain throughout, the picture has a nice film-like quality, aided by the inkier and silkier blacks. The nighttime race against a pair of muscle cars is particularly noteworthy, showering the action in rich, velvety shadows without sacrificing finer details and providing the 2.35:1 image with an attractive cinematic appeal.

Better yet, the 4K video kicks in the NOS, boosting the contrast and bathing every exterior shot with a sunnier, more vivid and glitzier appearance. Displaying significantly brighter, crisper whites throughout, viewers can practically feel the heat from the sunshine, radiating off the pavement and buildings. Outstanding specular highlights provide the chrome trimmings a glistening sparkle, metallic surfaces with a realistic gloss and luster, and the ripples of the water a shiny sparkle while the hottest spots, like explosions and headlights, maintain excellent sharp details. The HDR10 presentation also boasts a markedly more sumptuous and lavish array of colors, which is immediately apparent from the first, opening race. Even at night, cars glow and pop off the screen in hot, bubblegum pink, polished tiger orange, glossy purple, pearlescent chartreuse, and intense fiery reds. Primaries are also richer and deeper, like the cerulean blue sky and lively greens of the surrounding foliage. At the same time, flesh tones appear rosier and a bit more sunburnt, appropriate to the blistering tropical climate. (HDR10 Video Rating: 88/100) 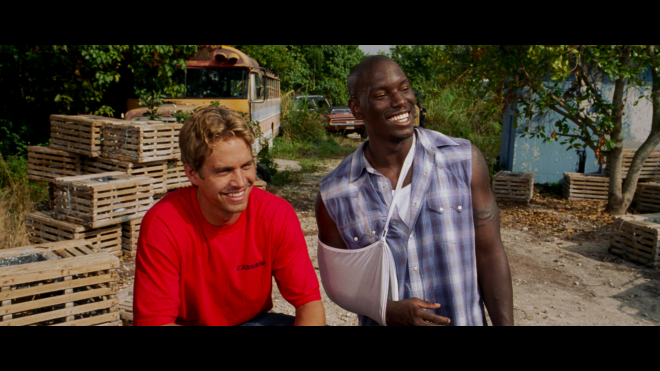 2F2F screeches down the street with an awesome DTS:X soundtrack that offers a few decent modifications under its hood, but nothing that makes it leaps-and-bound better than the Blu-ray's already impressive and excellent 5.1 DTS-HD MA counterpart.

This is not to suggest the newer object-based option is lacking because it occasionally generates a good soundscape that can feel quite immersive, especially during the car races. The loud booms and high-pitched vrooms of cars dashing down the streets echo all around and above the listening area. Every once in a while, a few atmospherics, like the chirping of birds in the distance, are subtly heard in the overheads, as well. However, such ambient effects are far and few in between while also at slightly higher decibels than in other scenes, calling attention to themselves and feeling more forced rather than feeling natural. A majority of the action is better delivered within the surrounds and are, frankly, more effective in creating a satisfying soundfield, making this mix feel more like a 5.1 track instead of an upgrade to the newest audio format. Ultimately, this track is comparable to its predecessor, meaning it's an overall excellent mix but not really a notable improvement over the DTS-HD version.

The new design benefits most as a front-heavy presentation, displaying a bit broader soundstage littered with various background activity fluidly traveling between the three channels and lightly bleeding into the top heights. Imaging comes with a slightly more spacious feel and a stronger sense of presence, but it still exhibits the same strong, nicely detailed mid-range as before, which delivers excellent clarity even during the loudest moments. The score and song selections also reveal a tad more warmth and fidelity as the music reverberates into the heights, but at the same time, it suddenly blares louder than the rest of the track. The low-end doesn't appear to show much of an improvement and isn't particularly memorable or robust, but the bass remains palpable enough to provide the grumbling engines and explosions with a hefty, bombastic weight.

With distinct, crystal-clear dialogue that's never drowned out, this DTS:X option makes for a great listen that complements the action and visuals well. (DTS:X Audio Rating: 82/100) 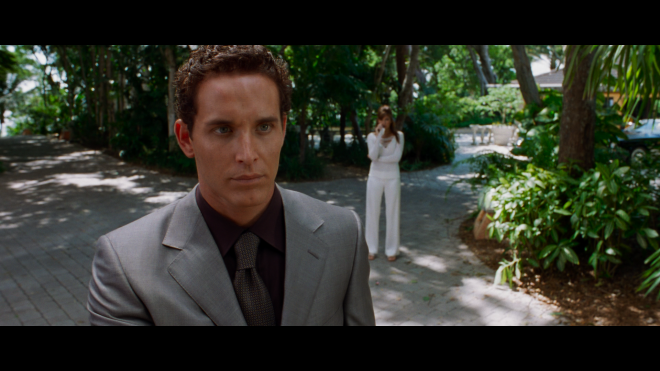 The same set of bonus features are ported over and available on the accompanying Blu-ray. 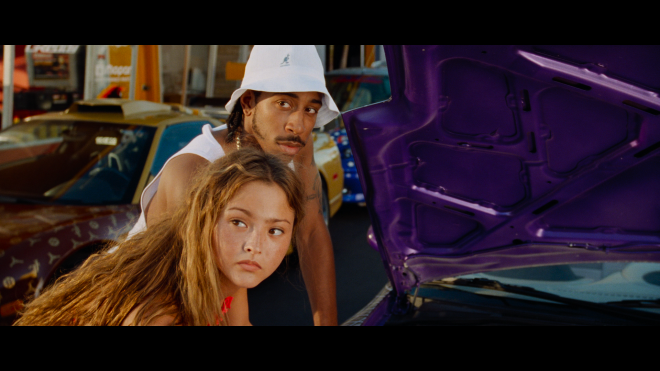 Although lacking the gruff presence of Vin Diesel, 2 Fast 2 Furious makes for a fun and decently entertaining follow-up to the car-themed actioner. Starring Paul Walker, the plot is ultimately a repeat of the first, but it nonetheless sows the seeds for continuing and expanding the series. The sequel speeds unto the streets of Ultra HD with a gorgeous-looking HDR10 presentation and an excellent DTS:X soundtrack. Porting over the same set of supplements as before, the overall package makes a recommended addition to the UHD library.

Sale Price 20.84
List Price 29.98
Buy Now
3rd Party 21.01
In Stock.
See what people are saying about this story or others
See Comments in Forum
Previous Next
Pre-Orders
Tomorrow's latest releases