With an indelibly memorable performance by Ron Perlman as the titular character, Guillermo del Toro's Hellboy continues to entertain fifteen years later with plenty of laughs, whimsically inventive action and freakishly imaginative visuals. The fight against the apocalypse rages on Ultra HD with a spectacularly beautiful 4K HDR10 presentation, an outstanding Dolby Atmos soundtrack and featuring a wealth of bonus material. This UHD edition of the cult superhero favorite is a Highly Recommended upgrade deserving a place in everyone's 4K library.

I have to admit I've never been a big fan of Dark Horse's Hellboy books, but I was familiar with the comics to be excited by the news of Guillermo del Toro (Pan's Labyrinth, The Shape of Water) very loosely adapting the first book into a live-action feature. As a del Toro fan, especially after what he did in Blade II, it felt like his darkly twisted, strangely imaginative and wildly fantastical sensibilities were a perfect match for a tale about a demon who grows up to be a superhero, and on top of that, Ron Perlman was set to play the titular character! The anticipation was high, and thankfully, del Toro did not disappoint in the visual department while simultaneously giving moviegoers an iconic and indelible performance from Perlman as Hellboy.

Admittedly, the plot of Hellboy isn't anything particularly special or memorable, sometimes leaving this viewer with much to be desired — a sentiment, I'm sure, that's pretty unpopular. David Goyer's script follows an incredibly simple premise about Nazi villains wanting to usher in the apocalypse. However, the story is ultimately devised only in service of the visuals, of seeing Big Red battle the legendary mystic Rasputin (Karel Roden) and his sword-wielding SS assassin Karl Ruprecht Kroenen (Ladislav Beran). And of course, it's a great treat to see Abe Sapien (Doug Jones but voiced by David Hyde Pierce) and Liz Sherman (Selma Blair) brought to life. In the end, Hellboy is visually captivating, funny and an all-around good time. 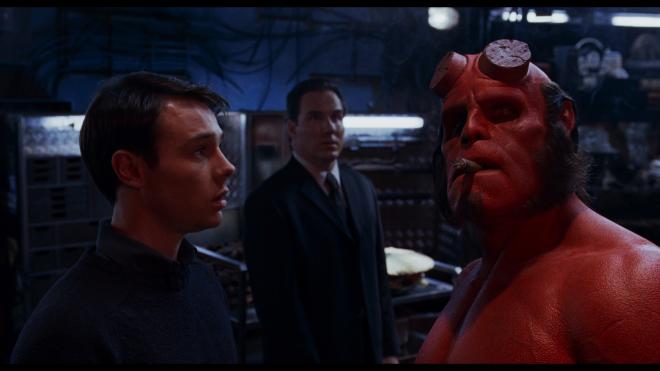 For a more in-depth take on the film, check out our review of the 2007 Blu-ray HERE, and be sure to read Michael S. Palmer's review of Hellboy II: The Golden Army on 4K Ultra HD.

Sony Pictures Home Entertainment brings Guillermo del Toro's Hellboy to Ultra HD Blu-ray as a two-disc combo pack with a flyer for a Digital Copy, which can be redeemed via sonypictures.com and Movies Anywhere. When redeeming said code, users have access to the 4K Dolby Vision version with Dolby Digital Plus 5.1 audio. The dual-layered UHD66 disc sits comfortably opposite a Region Free, BD50 disc inside a black, eco-elite vortex case with a glossy slipcover. Both the 122-minute theatrical cut and the extended, 132-minute Director's Cut are included on the UHD disc, and the difference between them is relatively small, providing more character interactions and a bit more comedic dialogue. At startup, the disc goes straight to an interactive main menu that changes screens while toggling between the usual options with music playing in the background. 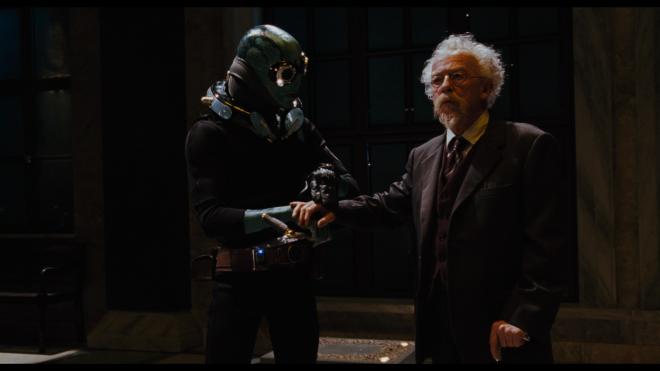 For a good chunk of the runtime, the HEVC H.265 encode boasts sharp definition throughout the elaborate stage production, the gothic props in the background and in the amazing practical effects, like the demon Sammael or Abe Sapien. Fine lines in the buildings and in the intricately embellished costume of Karl Ruprect Kroenen are highly detailed while the hairs and the stitching in the clothing of others are strikingly distinct from a short distance. Facial complexions are much more revealing with lifelike textures, and this is especially true of Hellboy during his many close-ups. Sometimes, resolution noticeably dips and looks comparably softer than its better moments, most of which are related to the dated CG visuals, but overall, this is the best the movie has ever looked, awash in a fine layer of film-like grain.

Admittedly, properly gauging contrast and brightness balance is a bit more challenging since Guillermo Navarro's photography makes an intentionally dark movie. Nevertheless, the heavily-stylized aesthetic benefits from the small boost in contrast, as the whites in clothing and various light fixtures are cleaner and crisper. Likewise, the improvement in specular highlights are subtle but still appreciable, the glare from light reflecting off wet surfaces now shows a tighter glow and revealing better detailing in the brightest spots, like scenes with fire. Black levels, too, are significantly richer and deeper with excellent gradational differences between the various shades and strong shadow delineation.

Again, Navarro's cinematography largely favors a bleak and murky appeal, which suits the story's gothic atmosphere well, so colors are understandably limited. Still, the orange-and-teal palette nonetheless comes through with notably warmer and brighter yellows from the street lights and a few of the lamps decorating some of the BPRD rooms. Other sections of the buildings, the sewers and Rasputin's mausoleum are bathed in vibrant cyans, cobalt blues and deep, vivid oranges while the sewer water is grimier, slimy green. Hellboy is also a deeper crimson cherry and his blood a slightly darker scarlet red that really pops. The skin tones of humans meanwhile are peachier with a slight rosiness in the cheeks of new-guy John Myers, making a great-looking HDR10 presentation that fans will love. (HDR10 Video Rating: 86/100) 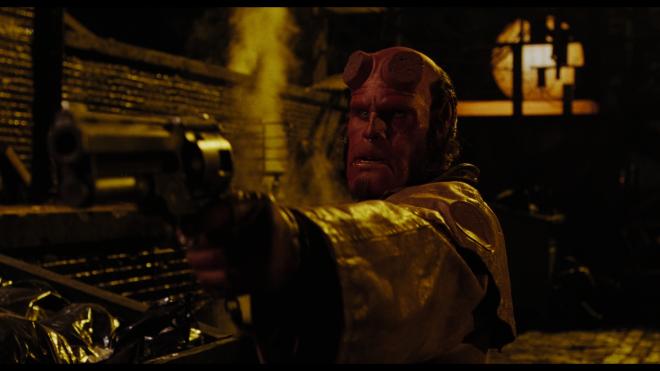 In his previous Blu-ray iteration, Big Red raged a battle against the apocalypse with a fantastic uncompressed PCM 5.1 track that really rocked the house. On Ultra HD, the good-hearted demon storms home theaters with an equally awesome Dolby Atmos soundtrack that supplies a few welcomed enhancements to the wildly gothic visuals.

Much of the attention is maintained across the fronts where various effects freely bounce around between the channels and into the top heights, creating a highly-engaging half-dome soundstage. Whether we're inside the rooms and halls of BPRD or outside doing battle with monsters, imaging is continuously broad and spacious while exhibiting sharp definition and separation in the mid-range, providing the score with exceptional acoustical warmth and the action with clean, crisp details. Dialogue is always precise and terrifically prioritized over the loudest, ear-piercing moments. A powerful and robust low-end also delivers some room-shaking presence to every fight scene, gunshots and Ron Perlman's throaty voice.

The surrounds are often employed with the echoes of bustling crowds, the commotion inside BPRD or the screams of bystanders running from the chaos. Bits of debris and other noise effectively and effortlessly pan between the rears and across the room, creating several noteworthy moments of envelopment with the subway fight offering a demo-worthy highlight. Occasionally, those atmospherics travel into the overheads to nicely expand and broaden the soundscape, such as the aforementioned subway sequence. The scenes with rain falling from above or the snowy wind blowing all around are also able to generate an immersive hemispheric soundfield, making this an awesome object-based mix. (Dolby Atmos Rating: 88/100) 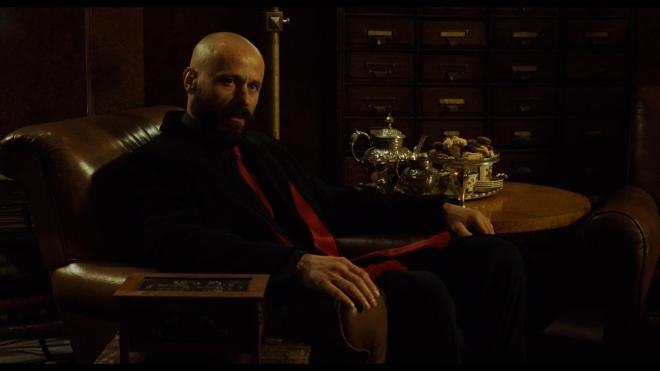 For this UHD edition of Hellboy, Sony Pictures has ported over a mix of supplements from previous home video releases while also introducing a pair of brand-new exclusives. 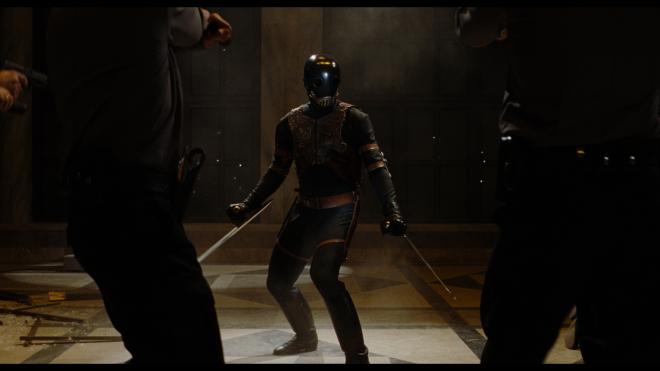 Loosely based on the Dark Horse comics of the same name, Guillermo del Toro's Hellboy is a visually enchanting and freakishly imaginative adaptation thanks to the director's whimsically gothic sensibilities. With an indelibly memorable performance by Ron Perlman as the titular character, the dark fantasy superhero tale continues to entertain fifteen years later with just as many laughs as wildly inventive action. The fight against the apocalypse rages on Ultra HD with a spectacularly beautiful HDR10 presentation struck from a brand-new 4K remaster of the original camera negatives and an outstanding Dolby Atmos soundtrack, making this the best the movie has ever looked and sounded on any home video format. Porting over many of the supplements from previous releases along with a pair of new exclusives, this UHD edition of the cult superhero favorite is worthy, recommended upgrade deserving a place in the 4K library.