Pitch Black not only works as a throwback to lean creepy horror/sci-fi filmmaking, but it spawned a franchise for Vin Diesel and the ocularly enhanced anti-hero Riddick. Still the best of the franchise, the film is creepy and David Twohy proves he’s an economical and creative director bringing big thrills on a tight budget. After an already excellent 4K Ultra HD Blu-ray release, Pitch Black Director’s Cut gets a new 4K Ultimate Edition box set from Turbine Media Group sporting the same excellent Dolby Vision transfer with a new highly-engaging Atmos audio track, and hours of new and archival bonus features to dig through. If you’ve yet to add Pitch Black to your 4K collection, this is a very cool set for the shelf. Highly Recommended

A transport flight takes damage from space debris forcing an emergency landing on a desolate desert planet. The multiple suns bake the planet’s surface. But for the ship’s pilot Fry (Radha Mitchell) and the rest of the survivors, the lack of water isn’t their biggest worry. Hiding in the shadows is a race of flying nocturnal creatures and they're very, very hungry. With a rare total eclipse about to cover the planet in darkness, the survivors will have to turn to the most notorious criminal in the galaxy, Riddick (Vin Diesel), to help them reach an escape ship before the creatures kill them all.

[Excerpt from our 2020 Pitch Black 4K Ultra HD Blu-ray Review]
“A sleek, polished blend of horror and western with a pinch of Ridley Scott's Alien, David Twohy's Pitch Black is a cult sci-fi favorite with an undemanding and insular plot focused on achieving just one goal. From the writer of other long-time favorites like The Fugitive, G.I. Jane, and Waterworld, the Vin Diesel vehicle is good brainless fun balancing thrilling action visuals with some arguably humdrum scenes. Simply put, in a story about running across a barren landscape in pitch-black darkness without being mauled to death, a few character exchanges can fall flat and feel rather empty, surprisingly doing little to move the narrative forward. Still, the script, co-written by Jim and Ken Wheat, attempts to introduce depth to a high-concept premise by touching on themes like self-preservation, self-sacrifice, and fate.

Many of these discussion points come from Radha Mitchell as the pilot of a transport ship willing to sacrifice not only the cargo but the passengers as well in order to save herself. This band of strangers includes a bounty hunter (Cole Hauser), an impressionable runaway (Rhiana Griffith), a British antique collector (Lewis Fritz-Gerald) and a Muslim group on a pilgrimage led by Keith David. The most dangerous of the bunch is also the main attraction: Diesel's amusingly belligerent but reluctant, accidental hero Riddick. His journey from indifferent, heedless criminal to willing, thoughtful champion is ultimately the real appeal. Frankly, the actor's brooding portrayal of the muscular anti-hero is the only three-dimensional character worth remembering in a movie that could have easily been forgotten.” 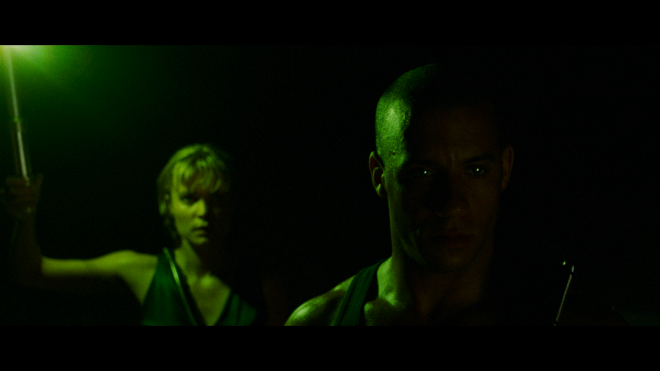 For my part, I’ve always been a big fan of Pitch Black. I can’t remember who pointed me towards it but I’m glad they did when they did because I got to see it alone in a giant theater right before it left its theatrical run. Sure, the visual effects are bottom-budget range and there is an air of cheap penny-stretching that could rival a low-rent Syfy Channel feature, but that’s exactly what works for this film. With a low budget came a lot of creativity. David Twohy and his team couldn’t afford to constantly show the creatures, so the film is steeped in deep shadows and creative lighting. 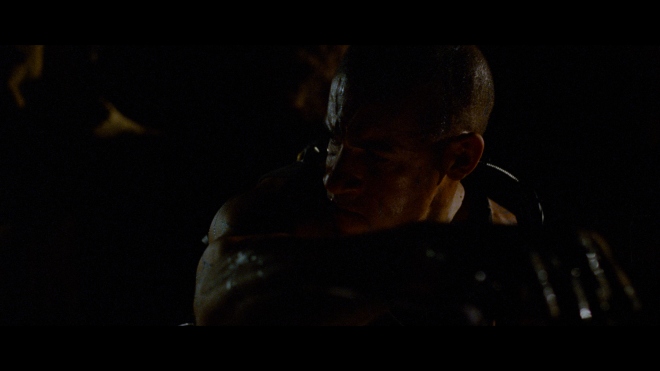 With a great cast including Keith David, Claudia Black, Cole Hauser, and Rihiana Griffith - the film works because they’re the ones maintaining the tension and suspense. If they didn’t pull off their respective roles the film would have fallen apart. I’m a little more enthusiastic for this one so I’m popping the rating up a titch. While I thought the sequels The Chronicles of Riddick and Riddick were pretty good and entertaining, this first one is where it’s at. Maybe one day we’ll get that Furya movie that’s been teased about for a couple of years now.

Pitch Black crashes onto 4K Ultra HD Blu-ray once again, this time thanks to Turbine Media Group as a three-disc 4K Ultra HD Blu-ray + Blu-ray set. The 4K version of the film is pressed on a BD-66 disc, and the 1080p version gets a Region Free BD-50 disc, with an additional Region Free BD-50 disc reserved for bonus features. All three discs are housed in a paper stock digibook, each with its own tray and not stacked. This set comes with a [Correction] 180-page booklet - that is only in German. While that may be a pain, I’ve been using the Google Translate app on my phone and that’s been very handy for reading these foreign release booklets. The only odd duck translation I encounter is if someone mentions a movie, the German title translation doesn’t always track for English.  Also included are a double-sided poster, patch, core sample card, ID Card, and lobby cards. Everything is housed together in a large hard-stock bookcase. Each disc loads to an animated main menu with traditional navigation options. Audio defaults to German so you’ll have to select the English track before starting. This disc also only offers up the longer and better Director’s Cut. The Theatrical Cut is not included. 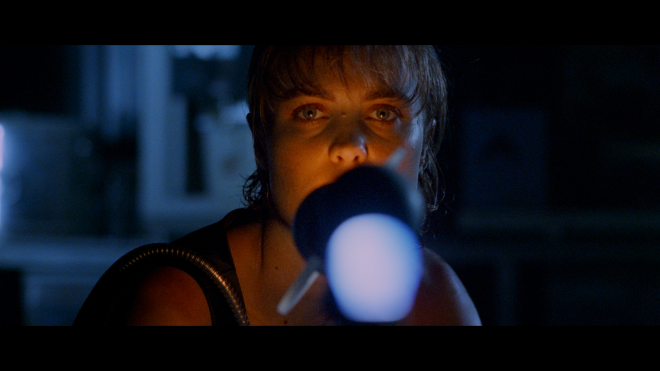 Pitch Black comes in with largely the same Dolby Vision transfer as what Arrow offered up in 2020 - and that’s not a bad thing at all. The main difference here is that the encoding is a tad different, coming in at a couple of gigs lighter than the Arrow release. Checking out bitrates between the two discs and the differences are nominal without enough of a swing to create any notable loss in overall quality. Sometimes this disc was a 10-15 points lower, other times it was a few points higher, others neck and neck depending on the shot in question. 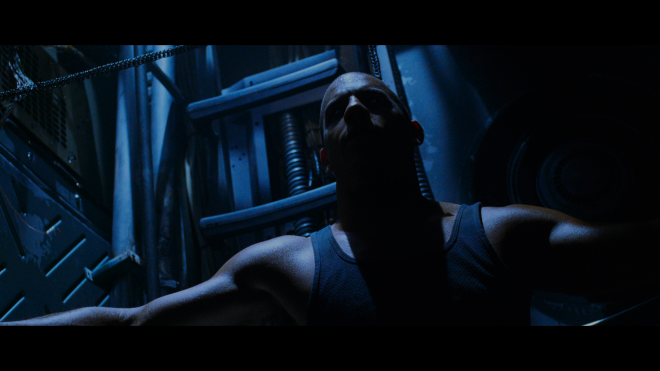 “The sci-fi horror actioner crash lands on Ultra HD with an outstanding HEVC H.265 encode, offering diehard fans a dramatic upgrade over previous high-def releases. Struck from a brand-new remaster of the original 35mm camera negatives, which was supervised and approved by David Twohy, the native 4K transfer flaunts notably cleaner lines in the crashed transport, the abandoned settlement and various other gadgets. Occasionally, the deliberately over-processed photography can take away from the picture's stronger aspects, making several sequences look a tad on the soft side, and the CG visuals have not aged well. Nevertheless, overall definition is sharper with better detailing in the costumes and in the rock formations of the desert landscape while the faces of the cast come with lifelike textures.” 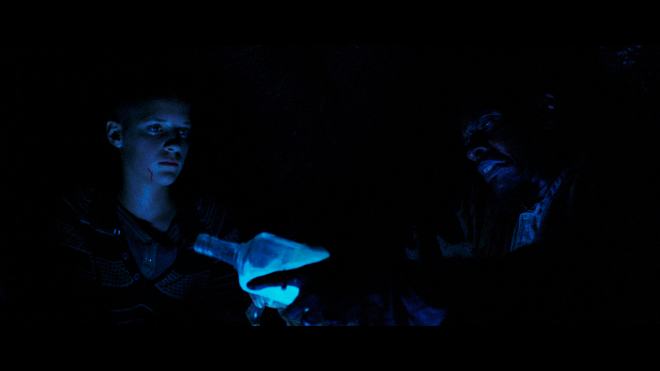 Now, Arrow’s release came in with a generally excellent DTS-HD MA 5.1 mix that handled the film’s dialog, scoring, and creepy sound effects very well. What makes this release of Pitch Black exciting is that Turbine engineered their own Dolby Atmos track and it offers a nice layer of improvement in element spacing, LFE, and general atmosphere without it sounding overworked. This new Atmos mix is on both the 4K disc and the 1080p Blu-ray - so if you’re not rocking 4K UHD yet, you’re not left out in the cold.

From the getgo, the crash landing scene proves to be a terrific showcase for what this mix has to offer. From Diesel’s narration on, there’s more rumble and bass with the soundscape feeling larger. I love when I can feel the bass through my floors! Height channels also come to life nicely with all of the crash and burn sound effects moving through the fronts, into the height channels, and through the sides and rears. Once on the planet, things cool down a little letting the main surround channels handle the heavy lifting with only sporadic height activity - the first creature attack or Fry’s excursion into the tunnels are nice moments there. When the two suns set and the eclipse begins and those creatures are zipping around overhead, there’s a lot more distinct pinpoint channel usage into the height, surround, and rear channels and it’s damned creepy if you’re watching with the lights off!

Arrow’s DTS-5.1 track was very good in my opinion, this new Atmos mix just takes everything that worked well in that track and makes it better. Perhaps not the biggest A to B improvement on the scale of things, but certainly an appreciable one. Now, this disc also comes with a DTS-HD MA 2.0 track that’s very good, but if you’ve set yourself up for Atmos that’s really the only way to go. There is not a DTS-HD MA 5.1 track included. As mentioned in the Disc Stats, the German Atmos mix is default so you’ll need to go into the language menu and flip over to English before starting the film. 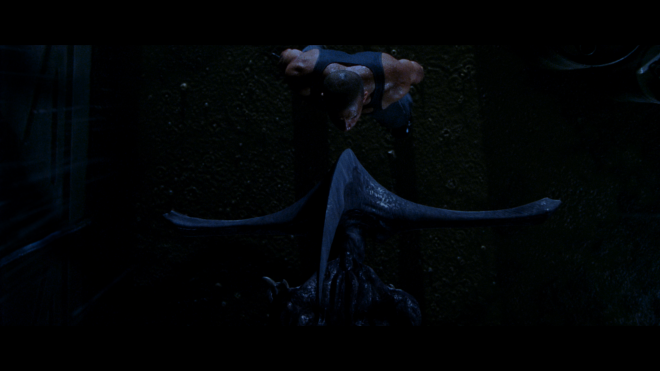 If a new Atmos track and a bunch of swag and an 180-page book wasn’t enough, Turbine has dug deep to bring fans a ton of new and archival bonus features. However, you’re not going to get the same set of new bonus features that were on the Arrow set. So those exclusive interviews and such remain exclusive. But what you do get here is nearly 2-hours of new exclusive interviews with various cast and crew including David Twohy and Keith David among others. Counting the book - there’s a ton of exciting stuff to dig through for this release. 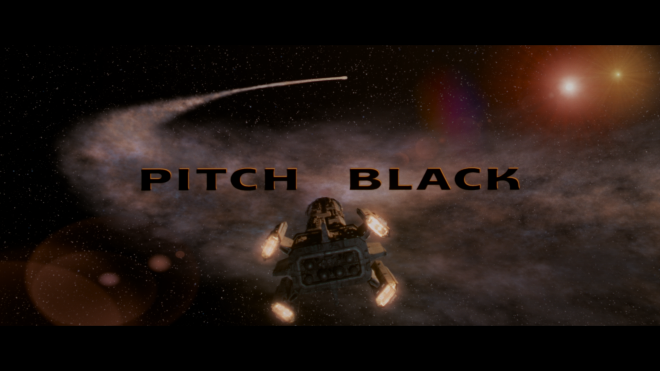 What started as a simple low-budget sci-fi horror film managed to spawn a fan-favorite franchise with Pitch Black. Personally, I wish Vin Diesel would spend more time on something like a fourth Riddick film than with his “family” for the latest Speedy and Vexed entry. F9 was stupid and fun, but it’s a franchise that’s jumped the shark many times now whereas there’s a whole universe for Riddick to explore. Maybe we’ll get that fourth film, but who knows at this point. Pitch Black was the first and is still the best of the franchise with two very highly entertaining followups The Chronicles of Riddick and Riddick - that I hope will come to 4K Ultra HD Blu-ray soon!

As for Pitch Black, this three-disc Ultimate Edition 4K Ultra HD Blu-ray set is a terrific release for fans to dig into. You now get the film with an excellent Dolby Atmos audio track for 4K UHD and Blu-ray on top of many hours of new and archival bonus features complete with an 80-page booklet and additional swag all housed in a slick-looking box for your shelf. While the Arrow set was damn good if you haven’t added Pitch Black to your 4K Ultra HD Blu-ray collection, this set from Turbine is a damned exciting way to go. Highly Recommended.