Another day, another release of Kevin Costner's aqua opus Waterworld! Universal Studios gives the infamous cult classic another A/V upgrade in 4K UHD Blu-ray. It's the same fishy squishy Mad Max-on-water ballet of budget excess and adventure only now it looks and sounds even better! Presented with a fresh native 4K HDR10 presentation, the film is gifted with an aggressive DTS:X audio mix upgrade to match. However, the only bonus feature included on the 4K disc is the longer Extended or "T.V." Cut of the film. While this disc certainly looks great and sounds amazing, it may not offer enough to fans who already purchased Arrow's Limited Edition. Still, it's certainly Worth A Look if you want the very best A/V presentation of the Theatrical Cut.

"Golly gee a single tear rolls down my cheek, you're gonna die for your friend?"

It hasn't even been six months and I'm already swimming around in Waterworld's wake again. Don't get me wrong, I love the movie, but after spending the better part of 7-hours watching three versions of this movie back in January, I wasn't too eager to jump in again. But damn it all, once that zoom in to the Universal logo with the North Pole melting gets going I couldn't stop watching. Check out my review of Arrow's 3-Disc Limited Edition for my full review of the movie. 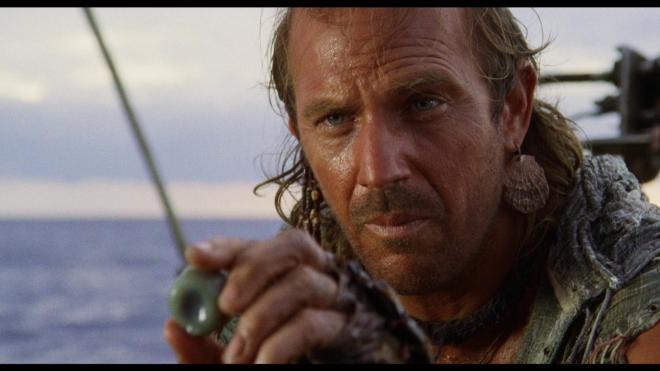 While I've seen this more times this year than I ever intended, I can't help but say Waterworld is still a fun ride. All the action and adventure spectacle is on full display in every frame. It's a technological marvel considering how it couldn't cheat and rely completely on weightless CGI to create its world of water.

I can't count how many times I've seen this movie over the years and I still get lost in all of the intricate details. This time I couldn't help but look at the weapons everyone was using. On one side you have all of the "peasants" on the atoll using spears with shark teeth for tips and then there are the Smokers with all their retrofitted guns with tin can barrels. Everything on-screen looks like it lived underwater for decades. This movie was the most expensive movie of its time before Titanic and it shows.

Maybe Universal didn't need to punch out a 4K UHD Blu-ray release considering Arrow just released their incredible Limited Edition, but here we are. I've got plenty of room on my shelf for another edition of Waterworld.

Universal Studios takes the deep dive with Waterworld on 4K UHD in a two-disc 4K UHD Blu-ray + Blu-ray + Digital set. As of now, the included digital slip redeems only in 1080p on VUDU. Pressed onto a BD-100 disc, the discs are housed in a standard black 2-Disc case with identical slipcover artwork. The 4K UHD disc loads to an animated main menu with traditional navigation options. The Extended Cut is accessed in the bonus features menu and presented in 1080p SDR. It is not on the standard Blu-ray disc - that is just the same old Blu-ray that Universal released 10 years ago. 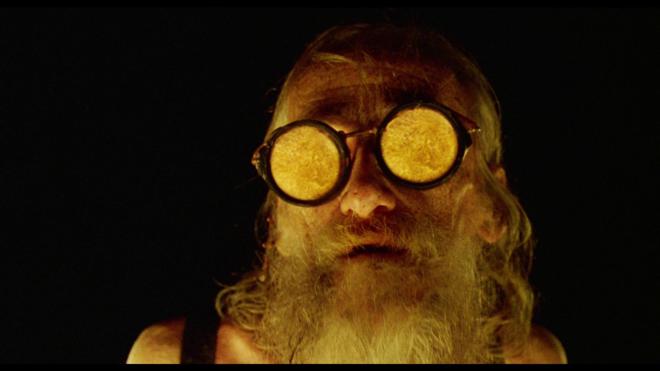 When I plugged into Waterworld for Arrow's Limited Edition Release, I was immediately struck by how incredibly BLUE the movie was. As this native 1.85:1 2160p transfer appears to have been sourced from the same restoration elements - blue is still a very prominent color - but with HDR10 in play, everything has much more nuanced and improved coloring, contrast, and stronger black levels. I honestly didn't think there was going to be much room from improvement but Universal found it here.

Film grain is a little more noticeable than the 1080p Arrow transfer, but it's not overly noisy and lends itself to a nicely film-like and organic appearance. Details gain a modest uptick. With the 1080p Extended Cut on the disc, it made it easy to switch back and forth for some spot check comparisons. While not dramatic improvements, they're noticeable - especially in the costuming where I noticed the individual hand-tied stitches that kept Gregor's clothes together or the various course grades of burlap and tarps to make sails. Like I said, not the most dramatic improvements but enough refinement to give this presentation the detailed edge.

As for colors, HDR10 balances everything out nicely. The blue water is less of a uniform royal blue color and now enjoys some color shade gradience. This is important because I felt that the stronger blues of the Arrow disc could push yellows a bit too green. It's not the most appealing example but when Costner pees in that cup it's much less green now than before. Likewise the mold, rust, and the sludge the atoll people recycle the dead in has a bit more yellow/brown gradience.

To that end, contrast and black levels enjoy a stable uptick in overall quality. The scenes on The Mariner's boat, where characters occupy close space to one another, is a prime example. Where the bright white horizon could bloom a little and people could just look too bright, HDR10 wrestles that under control and keeps things nice and even. Likewise in The Deez - especially scenes with the little guy in the oil well - offer up deeper richer black levels with improved shadows. All in all, this is now the best Waterworld has looked on home video - but whether or not it's worth purchasing yet another copy for is a judgment call you'll have to make for yourself. 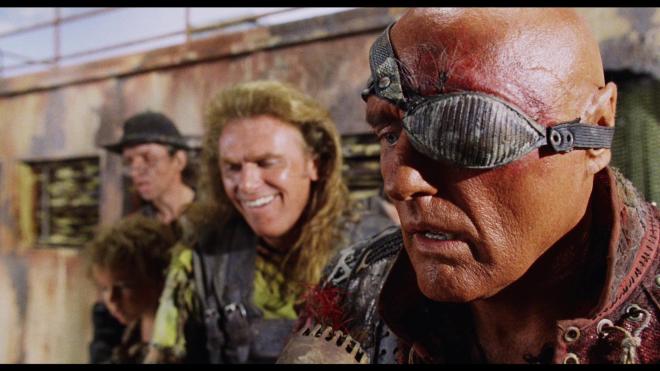 Waterworld gets nice and splashy with a brand spanking new English DTS:X audio mix that greatly opens up the soundscape. While I wouldn't quite call this the best of the best in DTS:X, it does offer a clear and noteworthy improvement over the already impressive DTS-HD MA 5.1 of the Arrow release. LFE is the big punch here with that opening zoom of the earth as the icecaps melt, that low rumble slowly builds and then thumps into James Newton Howard's catchy score. It's a hell of an effect. This newfound LFE kick is enjoyed throughout most of the film - especially in the big action sequences against the smokers. Anytime there's an engine on screen there's an appropriately appealing low rumble to accent it. The vertical channels open things up and gives the mix a lot more space. During dialogue sequences, there is more directionality between characters and where their dialogue originates from. Levels are on point, I ran this one loud and was not disappointed in the slightest! 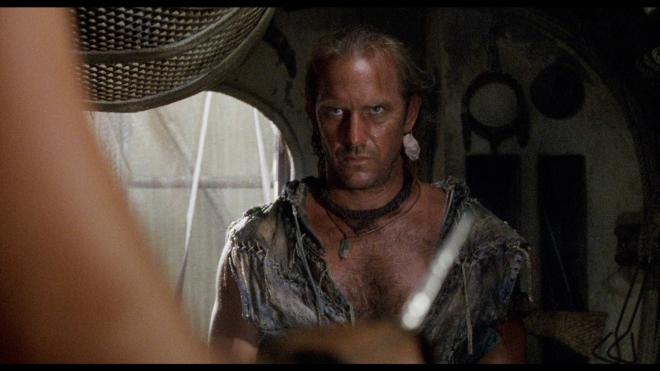 Well, that's the rub. I don't really call the Extended Cut of Waterworld a bonus feature, but that's all we get here. Universal didn't seem to want to include anything new or exciting from Arrow's Limited Edition release. It'd been great to get that Ulysses Cut on the second disc since it's the most complete version of the film without content edits, but we're not that lucky. This is nowhere close to the incredible collection of bonus features on Arrow's Limited Edition set. This is the same A/V presentation that Arrow provided for their release of this cut back in January. 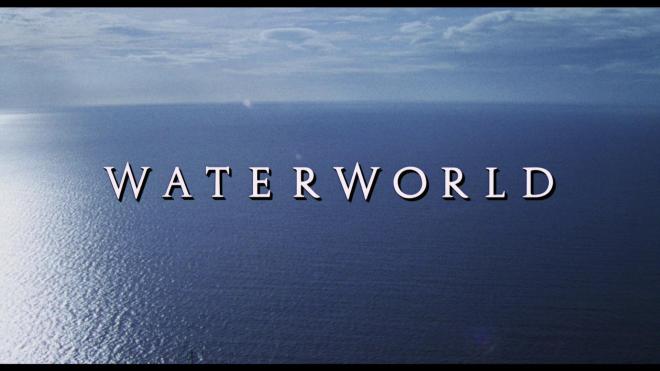 A year too early to call this a 25th Anniversary Edition (please don't let there be another release next year!), Universal Studios floats Waterworld onto 4K Ultra HD Blu-ray with impressive results. If this was the only new release out there, it'd be a no brainer for fans to pick up. However, Arrow's Limited Edition can still be found at a decent price - and that release really is the most complete package available. So it all comes down to how much you love Costner's fish flick? If you're not big on bonus features and only need the Theatrical Cut to survive, Universal's 4K UHD Blu-ray delivers a beautiful native 4K HDR10 video transfer with an active and engaging DTS:X audio mix. You also get the Extended "T.V." Cut of the film as a "bonus" if you're curious about all the stuff that didn't make the final edit. If you don't already own Waterworld this is an easy disc to recommend. If you already have Arrow's Limited Edition, your mileage may vary. Worth A Look.

Sale Price 14.99
List Price 22.98
Buy Now
3rd Party 14.99
In Stock.
See what people are saying about this story or others
See Comments in Forum
Previous Next
Pre-Orders
Tomorrow's latest releases