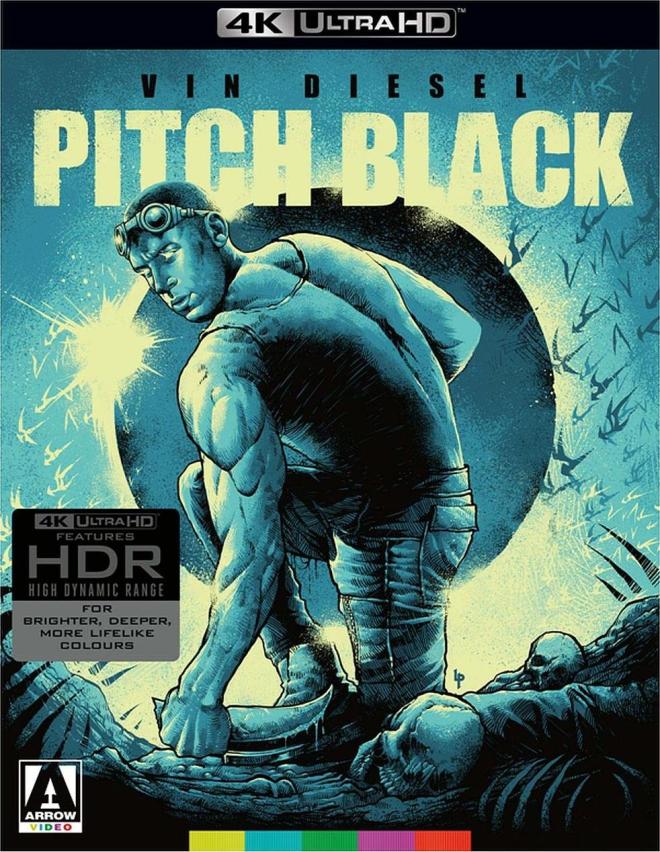 A sleek, polished blend of horror and western with a pinch of Ridley Scott's Alien, David Twohy's Pitch Black is a cult sci-fi favorite with an undemanding and insular plot focused on achieving just one goal. From the writer of other long-time favorites like The Fugitive, G.I. Jane and Waterworld, the Vin Diesel vehicle is good brainless fun balancing thrilling action visuals with some arguably humdrum scenes. Simply put, in a story about running across a barren landscape in pitch-black darkness without being mauled to death, a few character exchanges can fall flat and feel rather empty, surprisingly doing little to move the narrative forward. Still, the script, co-written by Jim and Ken Wheat, attempts to introduce depth to a high-concept premise by touching on themes like self-preservation, self-sacrifice and fate.

Many of these discussion points come from Radha Mitchell as the pilot of a transport ship willing to sacrifice not only the cargo but the passengers as well in order to save herself. This band of strangers includes a bounty hunter (Cole Hauser), an impressionable runaway (Rhiana Griffith), a British antique collector (Lewis Fritz-Gerald) and a Muslim group on a pilgrimage led by Keith David. The most dangerous of the bunch is also the main attraction: Diesel's amusingly belligerent but reluctant, accidental hero Riddick. His journey from indifferent, heedless criminal to willing, thoughtful champion is ultimately the real appeal. Frankly, the actor's brooding portrayal of the muscular anti-hero is the only three-dimensional character worth remembering in a movie that could have easily been forgotten.

For another take on Pitch Black, you can read our review of the Riddick Blu-ray Collection HERE.

This Blu-ray edition of David Twohy's Pitch Black comes courtesy of Arrow Video on a Region free, UHD100 disc, which is housed in a black, eco-friendly keepcase. Accompanying the disc is a 44-page pamphlet on glossy paper with color photos, production notes, a brief explanation about the restoration and fictionalized notes from an investigation on the crash. It also includes a pair of thoughtful essays with the first entitled "Where the Night Things Flit" by author Simon Ward and the second is Marc Shapiro's article "Hunter of the Dark." There are no trailers or promos before being greeted by a familiar menu screen with full-motion clips, music playing in the background and the usual options along the bottom. 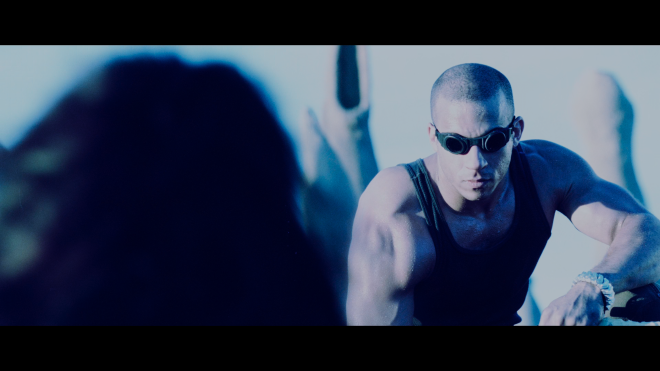 The sci-fi horror actioner crash lands on Ultra HD with an outstanding HEVC H.265 encode, offering diehard fans a dramatic upgrade over previous high-def releases. Struck from a brand-new remaster of the original 35mm camera negatives, which was supervised and approved by David Twohy, the native 4K transfer flaunts notably cleaner lines in the crashed transport, the abandoned settlement and various other gadgets. Occasionally, the deliberately over-processed photography can take away from the picture's stronger aspects, making several sequences look a tad on the soft side, and the CG visuals have not aged well. Nevertheless, overall definition is sharper with better detailing in the costumes and in the rock formations of the desert landscape while the faces of the cast come with lifelike textures.

More importantly, David Eggby's highly-stylized cinematography enjoys a bolder, more vivid contrast balance, making whites significantly brighter and hotter without also feeling blown-out. The desert planet's intense heat and action sequences also benefit from the radiantly crisp specular highlights, showering the visuals with a luminously brilliant glow along the edges of metallic surfaces, from the beaming sunshine and various light sources. Meanwhile, black levels are exceptionally rich and true, providing the nighttime action and many other scenes with inky, midnight shadows that penetrate deep into the screen without sacrificing the finer details. With excellent visibility in the darkest, murkiest corners of the frame and bathed in a very fine layer of natural grain, the 2.35:1 image comes with a lovely cinematic appeal and an appreciable three-dimensional feel.

At first glance, the mostly monochromatic aesthetic feels as though limiting the palette to blazing hot yellows and iron-grey blues, an intentional choice to give the movie a very metallic veneer. And certainly, much of the action is bathed in fuller canary yellows and golden marigolds while blues range from dark indigos and cerulean hues to vibrantly glowing teals in the artificial lights. But at the same time, the Dolby Vision presentation furnishes the action with a wider assortment of colors, like the deep, fiery oranges in torches, the crimson cherry reds and the royal magentas when the planet is in full eclipse. Most notably, facial complexions appear more natural and accurate to the planet's scorching climate with rosy tones in the cheeks of the cast. (Dolby Vision Video Rating: 84/100) 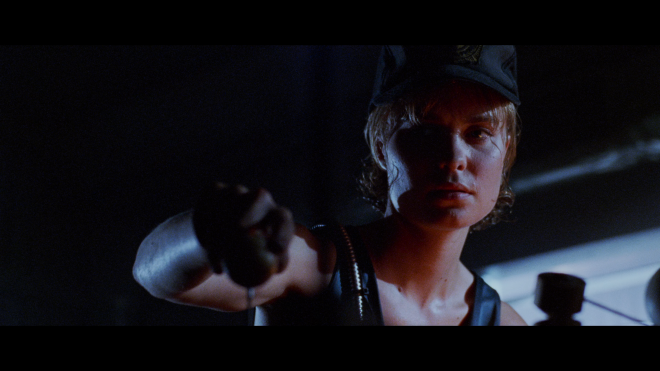 The cult favorite comes to home theaters with the same DTS-HD Master Audio 5.1 soundtrack as its Blu-ray iteration, delivering clean, decently-prioritized dialogue and excellent channel separation. Imaging is unique but spacious in that listeners gain a good sense of the planet's isolation without also seeming like the track is missing anything. Dynamic range is nothing special or extensive either, but moments of shock and sudden action remain crystal clear and discrete. Low-frequency effects are punchy and effective, giving those same scenes plenty of weight. The surround speakers are noticeably silent for a chunk of the movie's runtime but when employed, they create an immersive soundfield that's quite satisfying. (Audio Rating: 82/100) 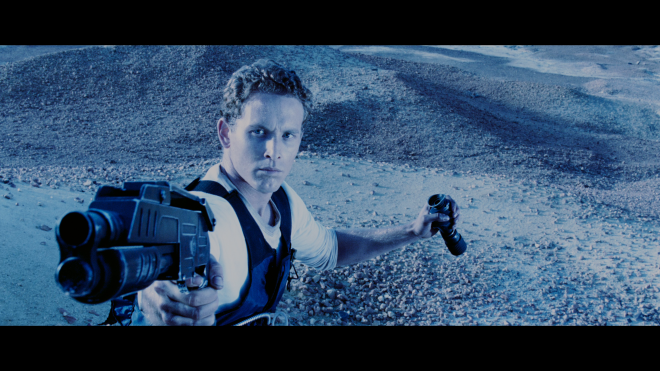 The bonus materials are mostly from previous releases, but this Ultra HD edition includes a new short documentary and five shorter featurettes. 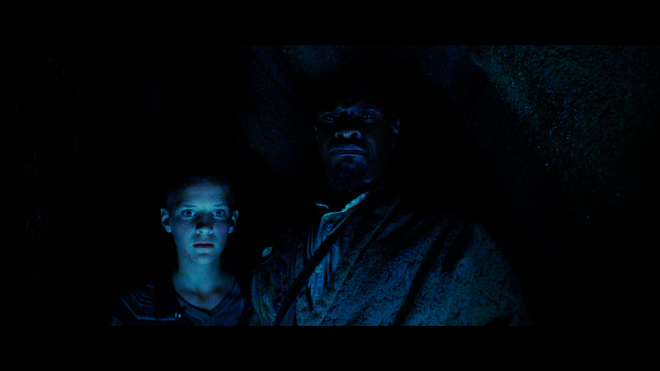 Vin Diesel makes his breakthrough performance as the brooding, anti-hero criminal with the amazing infrared vision Riddick in the sci-fi horror actioner Pitch Black. Although some conversations can fall somewhat flat and feel empty, David Twohy's feature is nonetheless good brainless B-movie fun with strong action visuals and a generally satisfying story. From Arrow Video, the highly-stylized space western crash lands on 4K Ultra HD with an excellent Dolby Vision HDR presentation, showing a dramatic upgrade from its HD predecessors, but ports over the same DTS-HD MA soundtrack as before. With a few new supplements for fans to sift through, the overall UHD package makes a recommended addition to the library.