For the last forty years, Ridley Scott's seminal sci-fi horror classic Alien continues to scare audiences, a masterpiece of suspense and terror that introduced the world to cinema's first female action hero and H.R. Giger's now-iconic Xenomorph. 20th Century Fox celebrates the genre masterpiece's 40th Anniversary on Ultra HD with a brand-new 4K HDR10 remaster that greatly improves on its HD predecessor. Though the same DTS-HD 5.1 track and bonuses are ported over, the overall package is nonetheless Recommended, making for an excellent addition to the UHD library.

It is to the masterful talent and skilled direction of Ridley Scott that his Alien endures as one of the greatest horror masterpieces of all time and continues to scare audiences forty years later. Released at a time when the public was still swooning over George Lucas's romantic space opera, Star Wars, the plot effectively reminds us the universe and its vast darkness remain a place to fear and dread. In the opening shots, the commercial towing spaceship Nostromo moves across the screen, intimating the same opening from Lucas's film, but Scott quickly abolishes the similarities and reveals an ugly, bizarre-looking structure floating in outer space, nothing like the sort we'd immediately associate with a sci-fi adventure. By the time we're introduced to our blue-collar heroes, awakening from a kind of embryonic sleep, the metallic stillness of the spacecraft has become suffocating and oppressively confining. Once threatened by the alien creature, these tight, enclosed areas are used to incredible effect, creating tension and suspense through space alone.

Unlike standard horror movies of the time and since, Scott's film is a more pensive slow burn withholding jump scares, instead, establishing an ominous and foreboding atmosphere, patiently biding its time before characters are forced to survive a ravenous and brutal monster. The story is well-constructed and ingenious with a great deal more to offer than frights, especially considering the fact that Ripley (Weaver) is our first female action hero. In this drab and uninspiring future, the struggles of the working class remain unresolved and continue to be problematic. It's in this space of already existing conflict that Ripley battles for her identity as a strong female voice. Her endless clashes with Ash (Ian Holm) are telling of this aspect. With H.R. Giger's sexually-charged design of the creature and the derelict spacecraft, this tension is brought to the forefront and her fight for self-awareness is made even more apparent. The narrative's underlying themes are ripe with imagery and symbolism of sexuality and politics.

For a more in-depth take on Ridley Scott's Alien, check out our original Blu-ray review of the six-film collection from a couple of years ago. 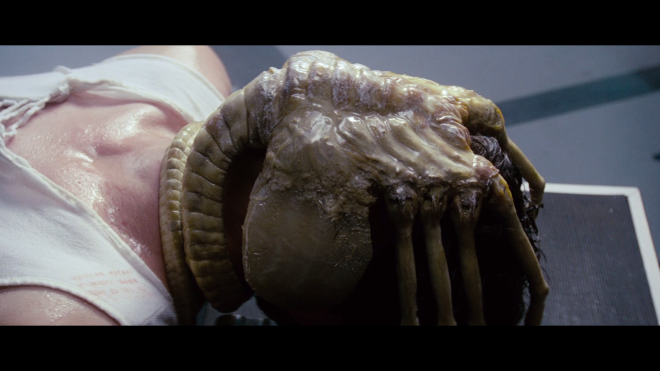 20th Century Fox Home Entertainment celebrates the 40th Anniversary of Ridley Scott's Alien on Ultra HD Blu-ray as a two-disc combo pack with a flyer for a Digital Copy, which can be redeemed via FoxDigitalMovies.com or VUDU, unlocking the HD SDR version with Dolby Digital Plus 5.1 audio. However, when redeeming via Movies Anywhere, users are granted access to the 4K HDR10 presentation with legacy audio through iTunes or other streaming services. The triple-layered UHD100 disc sits comfortably opposite a Region Free, BD50 disc inside a black, eco-cutout keepcase. At startup, the UHD goes straight to the main menu screen with full-motion clips, the usual options along the bottom and music playing in the background.

A masterpiece of terror and suspense bursts through the chest of Ultra HD, breeding a terrifyingly gorgeous and frighteningly exceptional HEVC H.265 encode that throws the previous Blu-ray out the airlock.

Reportedly, director Ridley Scott supervised a brand-new restoration of the original 35mm camera negatives, and those elements were then remastered to a 4K digital intermediate for this 40th Anniversary release. The results bring this sci-fi horror classic home with incredible detail, far better than anyone could have imagined given how excellent it already looked in HD. The intricate design of the Nostromo and the crashed alien spacecraft's interiors are markedly sharper and more revealing than before. Whether characters are chatting in the mess hall, running through the metallic, claustrophobic passageways or squeezing through air shafts, distinct lines in every scene are plainly visible while each button and computer gadgetry is highly detailed. Every pore, wrinkle, and negligible blemish is revealed with lifelike textures, and the Xenomorph exposes the immense work that went into its design.

As much as the increase in resolution delivers a welcomed step up over its Blu-ray predecessor, the better and frankly, more appreciated improvement comes by way of the notable boost in contrast. This doesn't necessarily mean a brighter picture overall, since the photography has always been creepily dark and dreary, layered with harsh, oppressive shadows to generate a morose, forbidding mood. However, hardened fans familiar with the many home video editions of this classic will immediately and definitely appreciate the cleaner, intensely radiant whites throughout. At the same time, the remarkable specular highlights add a vividly resplendent dazzle and pop to the various light fixtures while also exposing the smallest detail within the hottest spots. Better still, watery areas glisten and sparkle in the light, adding a gross twinkle to the alien's slimy drool, and other metallic surfaces have a realistic shine. Also, black levels are significantly richer and silkier, providing the 2.40:1 image with better gradational differences between various shades and improved visibility within the darkest, murkiest corners.

On the whole, the 4K Blu-ray is simply remarkable and beautiful to behold, even in spite of the lack of color and life throughout. The rather monochromatic, heavily-drained palette places more emphasis on maintaining a brooding, ominous atmosphere, but this HDR10 presentation remains faithful to those creative intentions. Writhing beneath Derek Vanlint's deliberately limited and noticeably restrained cinematography are accurately rendered and fuller primaries with reds, in particular, looking more dark crimson or a sangria berry shade, depending on the scene. As has been noted on the Blu-ray, Scott altered the color timing to slightly push the blues, and here, that change gives the picture a dramatically steelier, metallic appearance while also displaying some dramatic differences in the various tints. Meanwhile, secondary hues seem relatively the same although there is a bit more variation in the yellows, browns, and tans, and facial complexions appear healthier and more true-to-life with better coloring in the flesh tones.

All things considered, this new 4K video transfer delivers a significant upgrade, and the film has never looked better, marking it as the definitive version of the horror masterpiece, awash in a thin layer of natural grain, giving it an appreciable film-like and stunning cinematic quality. (HDR10 Video Rating: 96/100)

While a case could be made that a new object-based track might have been an appreciated improvement to complement the excellent 4K video presentation, it's also understandable why 20th Century Fox opted to simply port over the same DTS-HD MA 5.1 soundtrack enjoyed on previous Blu-ray releases.

Alien doesn't have much going on sonically, which is by design and not any technical limitations, and this lossless mix is faithful to that. Silence becomes a terrifying character in and of itself, and this track doesn't add any artificial effects in the surrounds. Most of the attention is given to the fronts with well-prioritized vocals and an expansive dynamic range. The other two channels display the discrete, off-screen sounds of the ship accurately and flawlessly, creating a wide and spacious soundstage, some of which effectively travel into the top heights when applying an AV receiver's Dolby Surround or DTS: Neural:X up-mixing functionality. Bass is also not all that active, but there is a noticeable low-end presence throughout, adding depth and some punch to action sequences. Rears are essentially reserved for very light atmospherics and faint echoes that nicely expand the soundfield. Ripley's escape during the self-destruct countdown exhibits the most activity so as to raise the suspense and energy. Jerry Goldsmith's artfully subtle score also makes good use of the back speakers with mild bleeds. Ultimately, this lossless mix of a sci-fi horror classic sounds excellent. (Audio Rating: 82/100)

The same set of supplements from the first disc of the Anthology and 6-Film Collection Blu-ray box sets are ported over and can be enjoyed on the Ultra HD.

Celebrating its 40th Anniversary, the film hatches from its pod on Ultra HD with a brand-new 4K restoration and remaster of the original 35mm camera negatives, birthing a significantly stunning and gorgeous HDR10 presentation that greatly improves on its Blu-ray predecessor. Although crash landing with same DTS-HD MA 5.1 soundtrack and supplemental material as before, the overall package is nonetheless recommended for both genre fans and 4K enthusiasts.