Michael Doughtery's hit horror/comedy comes to 4K Ultra HD Blu-ray with a new cut of the film, Atmos audio, and a ton of new bonus features!

What better way to celebrate Christmas than with a little festive horror film dedicated to the most famous seasonal anti-hero? Krampus was a surprise hit way back in 2015 and now we get to finally see the film as it was meant to be seen with all of the little bits of gore and language that were cut to secure a family-friendly PG-13 rating. 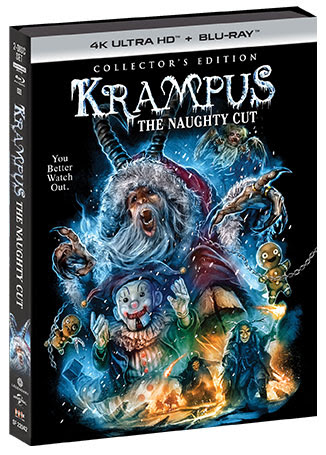 In addition to the new cut which looks to run at about 102-minutes, this two-disc 4K UHD Blu-ray and 1080p Blu-ray set will also snatch up a new Dolby Atmos audio mix along with a host of excellent new features that even the most misbehaved little boys and girls will want to take a look at.

If you're keen to upgrade your old Blu-ray - Krampus: The Naughty Cut - 4K Ultra HD Blu-ray is now up for pre-order here - but if you order direct from Shout! Factory, you can pick up an 18" x 24" poster while supplies last - and as of this writing, is cheaper than what Amazon is currently listing this at.