Thanks to Scream Factory, Michael Dougherty’s 2015 horror/comedy/Christmas flick Krampus: The Naughty Cut terrorizes 4k Ultra HD Blu-ray. This creepy hilarious film was a surprise hit in theaters and has quickly become a seasonal classic and now can be enjoyed in a slightly longer form. Now in Ultra HD with Dolby Vision and a new Atmos audio mix - it looks and sounds better than ever topped off with some excellent new and archival bonus features. Highly Recommended.

Young Max (Emjay Anthony) seems to be the only one feeling the Christmas spirit. In a letter to Santa, he desperately hopes Christmas will be like it used to be when his perfectionist mother (Toni Collette) and work-addicted father (Adam Scott), his boyfriend-addicted sister Beth (Stefania LaVie Owen) could celebrate the holiday with their grandmother Omi (Krista Stadler). And if everyone could get along with Uncle Howard (David Koecher) and Aunt Linda (Allison Tolman), and their kids all the better. But when Max’s list falls into the hands of his cruel cousins, he gives up on the spirit of Christmas triggering the arrival of the Anti-Santa - the demon Krampus and his diabolical minions.

I discovered Krampus entirely by happenstance. I’d heard of it from internet chatter and saw the poster at the theater but that was it. Never saw a trailer. Never read a review. I actually went to the theater to see another movie but when it turned out that the auditorium had some gremlins in the audio system, the theater gave me a free ticket to anything else and since I didn’t want to brave a freezing Chicago winter walk home I figured I’d give Michael Dougherty’s latest a shot. What was turning out to be a disastrous outing turned into one of my favorite movie-going experiences. I had the auditorium all to my self so I got a prime seat without any annoying chitchat. The film was a thrill-ride dark family comedy with some genuinely terrifying practical effects creatures thanks to the geniuses at WETA. Even as a PG-13 feature it didn’t hold back or feel cheated by its rating. It’s like Evil Dead II and National Lampoon’s Christmas Vacation had a demented lovechild. 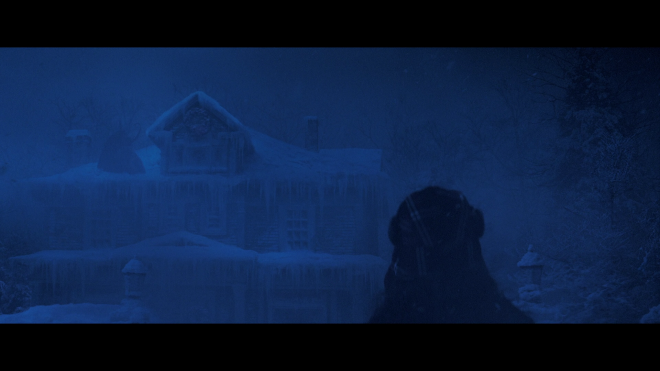 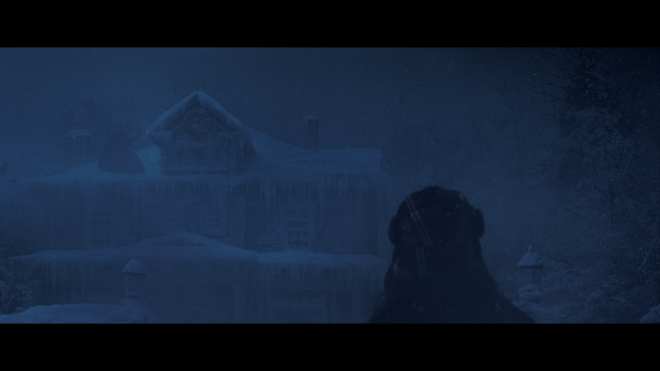 If I have a criticism it’s that the dark humor could have had a little more bite - especially with the overly satirical nature of the big exhausting family gettogether. While there’s still a lot of humor in the horror, it could have used some more edge. Trying to keep things somewhat family-friendly, most of the humor feels pulled back. But that’s a small nitpick really. Now with the slightly longer Naughty Cut, we get a little more choice uses of language, a little more time for character-building, and a little extra splattering of gore. These are basically all of the slight scene extensions found in the bonus features just reinserted into the film proper. This Naughty Cut doesn’t fundamentally change the experience any. Aside from the number of F-Bombs, I’d be willing to bet this new cut would still pull a PG-13. It’s still the same movie, only roughly four minutes longer. 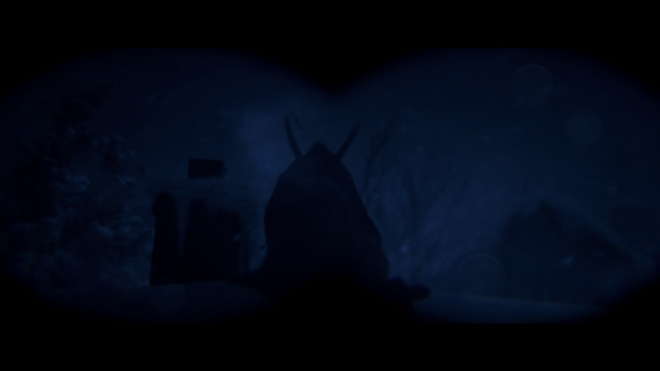 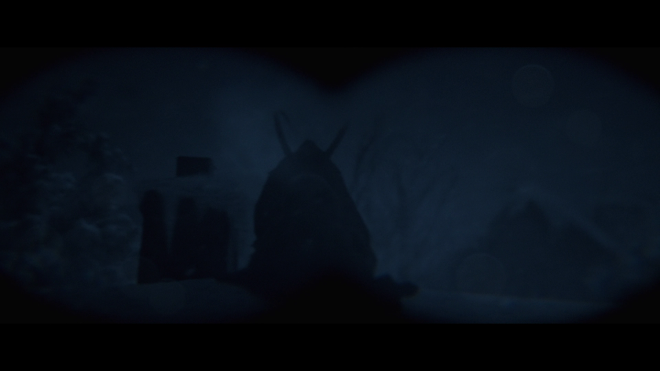 For another take - read our 2016 Blu-ray Review

Vital Disc Stats: The 4K Ultra HD Blu-ray
This new seasonal favorite comes to 4K Ultra HD Blu-ray as Krampus: The Naughty Cut from Scream Factory in a two-disc 4K UHD + Blu-ray Collector’s Edition. In addition to the 4K disc, the standard 1080p disc is packed with this new longer cut sourced from the recent remaster. Both discs are housed in a standard black keepcase with identical slipcover and reversible insert artwork. The discs load to animated main menus with traditional navigation options. 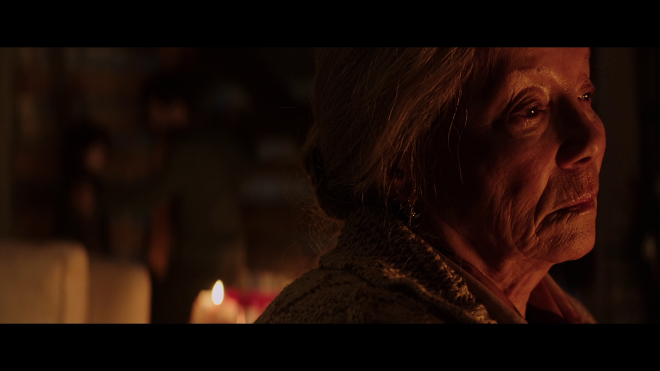 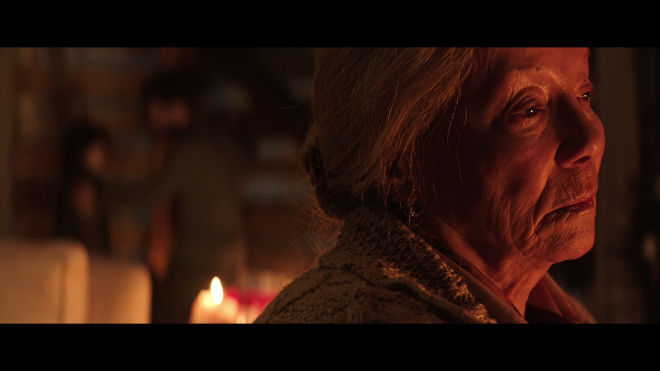 Shot digitally and finished on a 2K Digital Intermediate, Krampus picks up a welcome upgrade with this upscaled 2160p Dolby Vision transfer. Given the limitations of the source elements, there are only subtle improvements with details. Doing some frequent disc flipping, there were several brightly lit sequences that offered some slight enhancements, but most of the time there's little to no difference in details. The lack of notable detail difference is partly because most of the film is so very dark and steeped in shadows - but thankfully nothing quite so dark as AVP: Requiem where you can’t see anything. Some sequences are just a little brighter, others a bit darker and more ominous. You still get a full appreciation of all the creepy elves, snowmen, and demonic gingerbread men stalking this film. 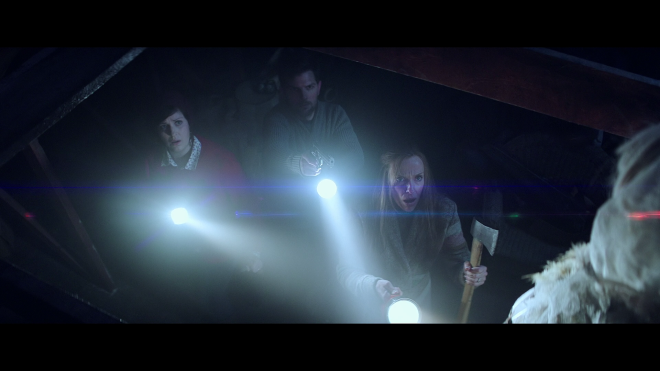 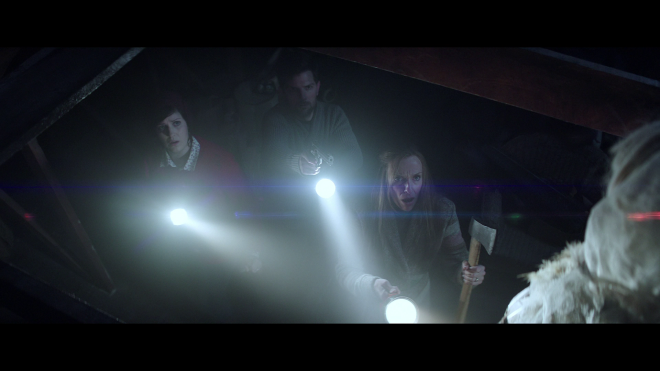 The biggest difference you’re going to see with the 4K disc and the new Blu-ray is color timing and brightness. Whites are crisper and more natural with black levels solidifying deep inky blacks without being quite so hazy and avoiding the worst crush issues of the 2016 release. There’s less of a green tone to the image favoring more of an icy blue color now. The blue shift is more noticeable whenever the family leaves the house and braves the storm. Primaries also get a little extra punch with some stronger reds, blues, and yellows than the previous transfer - but those are really most notable in the opening moments of the film.

With Dolby Vision (and HDR10), the 4K disc becomes the easy winner. Dark outdoor scenes take on a more natural cool blue tone allowing for some sharper details to come through when Beth is out to find her boyfriend or when Tom and Howard try to find her. Firelight is also warmer with a much more natural red/orange presence to the flickering flame light. For the calmer quiet scenes with the family huddled around the fireplace, the extra shadow definition with deeper orange/red firelight gives the scenes a creepier vibe without losing important details or slipping into crush territory. The animated flashback sequence also takes on a more pronounced aged sepia tone this time out. Image depth also gains a welcome boost, even during the darkest sequences there’s plenty of three-dimensional presence to the image. While not the biggest set of improvements, overall it’s a stronger more satisfying visual experience. 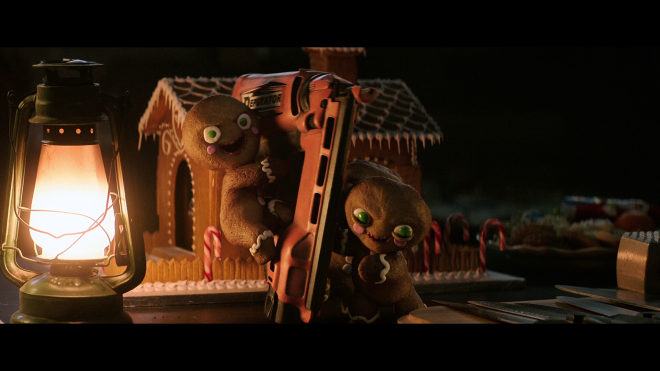 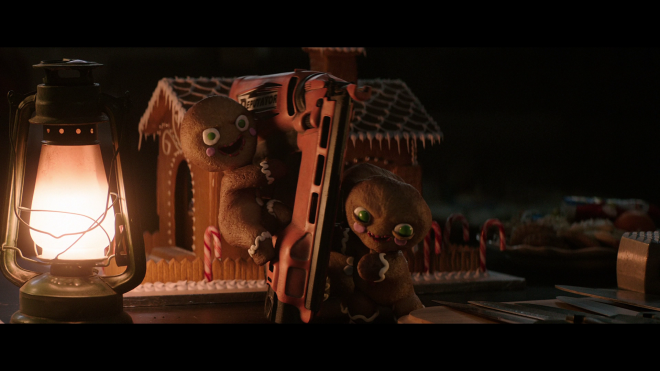 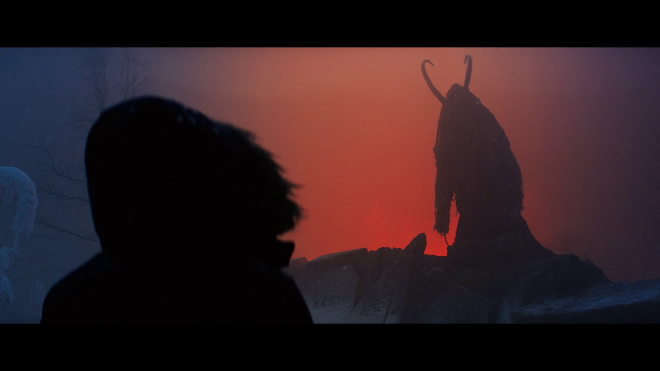 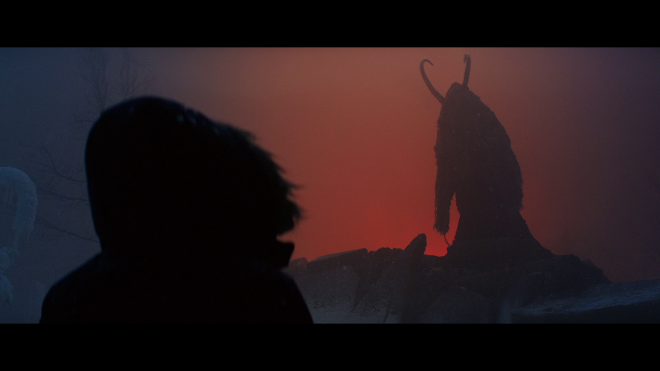 Now the big winner for this release is the new Atmos mix that is present on both the 4K disc and the new 1080p disc. The 2016 release enjoyed a near-demo-worthy DTS-HD MA 5.1 track and this new Atmos mix takes everything that worked so well and gives it some subtle tweaks to make the most of the new format. The biggest benefit I heard - and felt - was the overhead effects. Anytime Krampus is stomping on the roof or when that terrifying Jack-In-The-Box monster is shimmying around in the vents, the object placement is terrific. The creepy critters and their thumping around also punch some great LFE giving the subs some room to rattle the floor a bit. 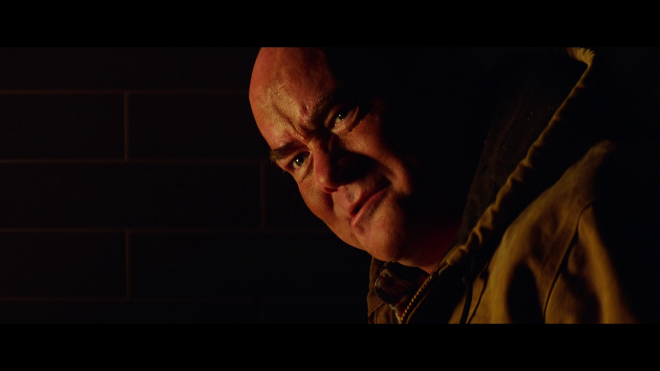 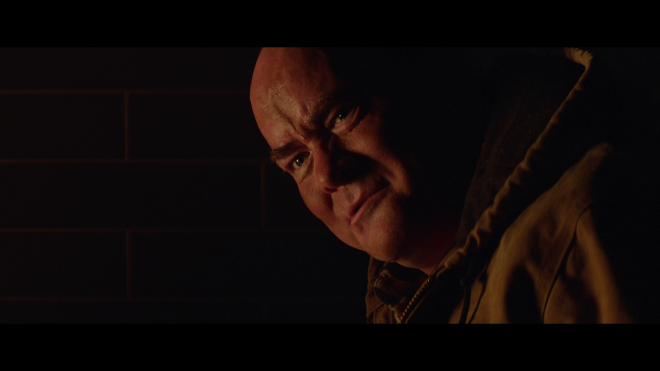 Throughout, the dialog is clean and clear. The Douglas Pipes score accents the creepiest - and funniest - sequences without sounding like it’s being pushed in to add noise to an already active mix. Surround channels are almost always engaged, if the family isn’t being attacked that creepy dissonant sound of a raging blizzard certainly raises the hairs on the back of your neck. When Beth is about to get attacked is a damn creepy sequence. It sounded great in DTS-HD MA 5.1, but now it’s even better in Atmos with Krampus jumping from roof to roof!

For those not rocking Atmos - the same DTS-HD MA 5.1 mix from the previous release is still available on both the 4K and 1080p Blu-ray discs. 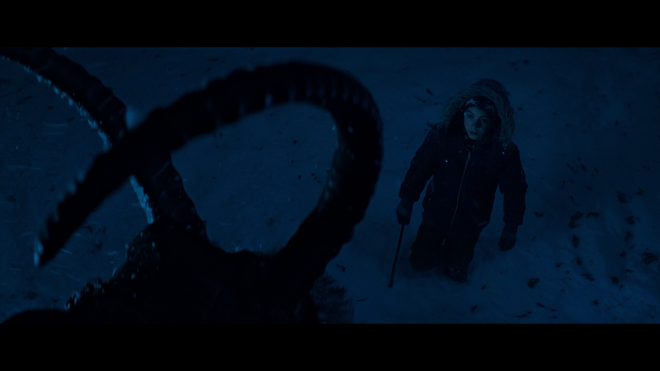 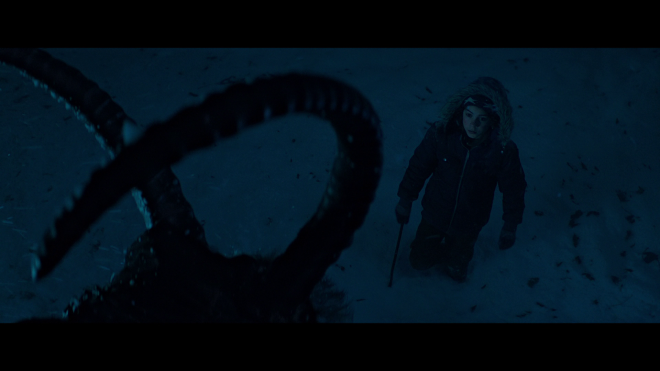 Not leaving anything in the bag, Scream Factory loads up this release with an impressive selection of new and all previous archival bonus features. The same audio commentary is brought back and it’s a fun listen if you’ve never given it a go. It’s the lone bonus feature that appears on the 4K and 1080p discs. Everything else is on the 1080p Blu-ray. You get about an hour of new informative interviews. Each has some great insight into the production but David Koechner is easily the most entertaining. 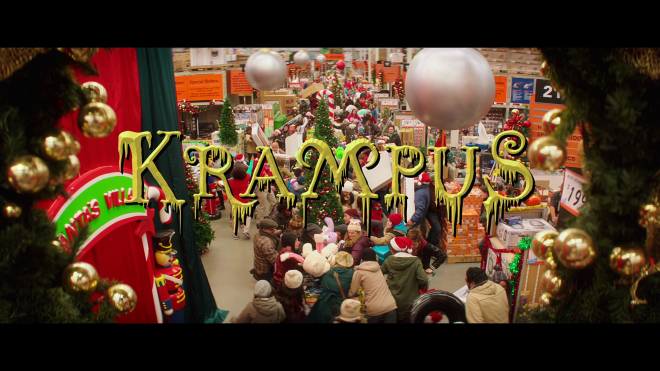 Just in time to spread some very much-needed cheer, Scream Factory delivers holiday horror/comedy fans Krampus: The Naughty Cut on 4K Ultra HD Blu-ray. Running a little longer than the original PG-13 release, it offers up some extra character bits, some choice language usage, and some extra gore. Not a different or better film, just more of what was already great. Capped off with an excellent Dolby Vision transfer, a terrific Atmos mix, and an informative mix of new and archival bonus features, this is the gift that is sure to keep Santa’s dark little helper from visiting your home this year. Highly Recommended.