Much like every other Ridley Scott-directed medieval sword and armor film, The Last Duel failed to gain much of a following at the box office. While a hit with critics, few people braved the theater to see this film about a woman whose husband challenges her attacker to a duel to the death to restore her honor. I tried to see it myself, but it lasted at my local theater for all of a week. Even without a huge box office offering, it's nice to see Disney/Fox Studios giving this film a full 4K Ultra HD Blu-ray release with Dolby Atmos audio. 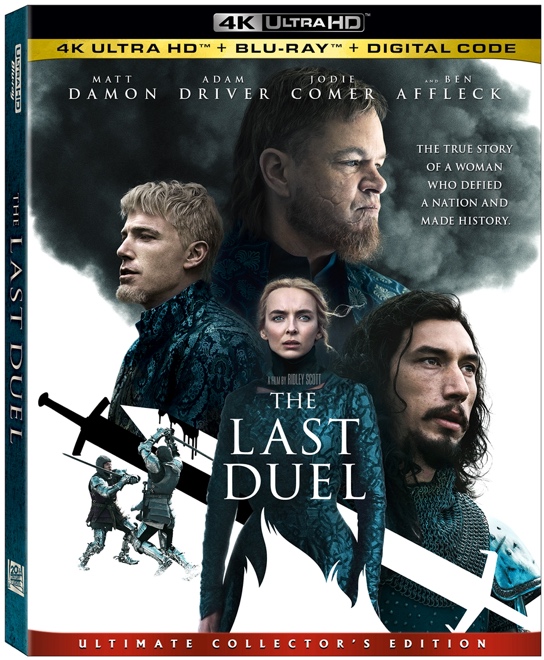 Obviously, The Last Duel is also coming out on Blu-ray, but Disney didn't send along the cover art for that set. I imagine it'll look pretty much the same. Also, there's no word as of yet about any kind of retailer exclusive packaging or SteelBook option. We're pretty sure Disney will keep to their usual pattern and offer the disc in HDR10 with the 4K streaming picking up Dolby Vision. The 4K disc will offer Atmos audio while the 1080p disc will only be equipped with a DTS-HD MA 7.1 mix. Bonus features are pretty light, amounting to all of a single featurette. Who wants to bet since this is a Ridley Scott film there will be a Director's Cut edition with more elaborate bonus features? That said, I do hope Disney/Fox has Kingdom of Heaven lined up for a 4K Ultra HD Blu-ray release.

As of now neither the Blu-ray or 4K Ultra HD Blu-ray are up for pre-order, but as soon as they are we'll update our listings ASAP.

Jodie Comer is spellbinding in this tale of betrayal and vengeance set in 14th century France from visionary filmmaker Ridley Scott. Based on actual events, the film stars Matt Damon and Adam Driver as friends Jean de Carrouges and Jacques Le Gris, two knights who must fight to the death after de Carrouges’s wife (Comer) accuses Le Gris of assault.

Based upon the book by