The classic 1997 science fiction masterpiece about the perils of human perfection lands on 4K Ultra HD Blu-ray from Sony Pictures in a deluxe SteelBook package. 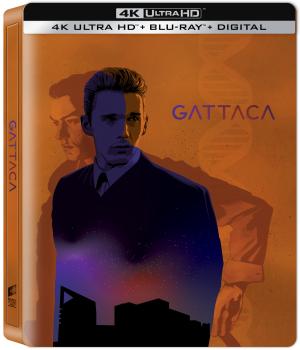 Per the announcement from Sony, this 4K UHD Blu-ray disc will feature a new 4K remaster with HDR10 from the original camera negative and a new Dolby Atmos audio mix to match. As of now, the only bonus features appear to be recycled from previous releases. With that, what's really cool about this announcement is that it was one of the featured titles from Sony's Survey they put out a couple months ago to help them determine what fan favorites would get solo releases or be included in another Columbia Classics 4K set. Hopefully, this means more deep catalog titles will be making their 4K debuts shortly. The last 1080p Blu-ray for Gattaca came out on Blu-ray 12 years ago. It was a highlight for the format at release, but it has needed a revisit for some time so this is very welcome news indeed.

As of now, Gattaca isn't yet up for pre-order but we expect those links to go live any time now and we'll update our listing ASAP.

Here is the full press release from Sony:

NEWLY REMASTERED FROM THE ORIGINAL CAMERA NEGATIVE
SYNOPSIS
Ethan Hawke, Uma Thurman, Alan Arkin and Jude Law star in this engrossing sci-fi thriller about an all-too-human man who dares to defy a system obsessed with genetic perfection. Hawke stars as Vincent, an “In-Valid” who assumes the identity of a member of the genetic elite to pursue his goal of traveling into space with the Gattaca Aerospace Corporation. However, a week before his mission, a murder marks Vincent as a suspect. With a relentless investigator in pursuit and the colleague he has fallen in love with beginning to suspect his deception, Vincent’s dreams steadily unravel.