With excellent performances, strong characters and gorgeous stage design, Andrew Niccol's cautionary tale Gattaca remains a beloved sci-fi favorite after twenty years. The dystopian vision of the future worms its way to Ultra HD with a beautiful 4K video, an excellent Dolby Atmos track but the same set of supplements. Still, the UHD package is Recommended.

Nearly twenty-five years ago, I walked out the theater really loving Gattaca but not thinking it was the profound sci-fi film of the year that many kept touting. And frankly, I still don't. After all, this was the year of Contact, Starship Troopers, Abre los ojos and Cube, which touched on ideas I would argue as far more provocative and challenging while confronting the ramifications of their respective premises. This is not to say Andrew Niccol's cautionary tale doesn't center on an intriguing concept, which imagines a near dystopian future governed by eugenics and blatant genetic discrimination. Only, the story never fully embraces the darkly bitter tragedy of its conceit, allowing its protagonist Vincent (Ethan Hawke) to conveniently elude the system, along with the potential to flirt with questions about predestination and identity, in order to achieve an unironically preordained and rather contrived happy ending.

Again, this is not to suggest that Gattaca is a bad movie because it is a splendidly well-made film, and I find a great deal to admire with each viewing. So, if it's not for the story, then what keeps bringing me back to this bleak outlook on the ethics of scientific progress? One of my main loves with the film is its phenomenal stage design and art direction, a bizarre dreamlike vision of 50s and 60s kitschy pop aesthetics merged with the cold, sterilized fantasy of the future. The whole production almost feels as though it were filmed in the 60s, convincingly capturing what filmmakers back then would have imagined the 21st Century would look like. My other love for Gattaca comes from the characters genuinely struggling with a normalized system of genetic determinism, of how within less than two decades, determining one's lot in life based on their genes can become the natural order of things. 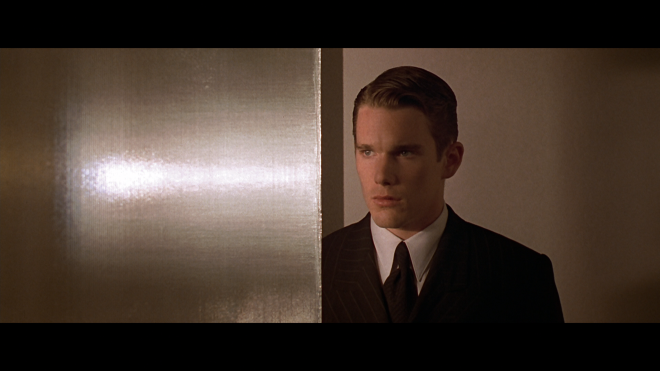 Sony Pictures Home Entertainment brings Andrew Niccol's Gattaca to Ultra HD as a two-disc SteelBook combo pack with a Digital Copy code. When redeeming said code via sonypictures.com/MAredeem or MoviesAnywhere, users are granted access to the 4K digital version in Dolby Vision with Dolby Atmos audio. Housed inside an attractive, copper-colored SteelBook, the dual-layered UHD66 disc sits comfortably atop a Region Free, BD50 copy of the movie. At startup, viewers are directly taken to a static screen with the usual menu options along the bottom while music plays in the background.

Genetically engineered for the best performance, the dystopian sci-fi favorite worms its way to Ultra HD with an overall fantastic and beautiful HEVC H.265 encode.

Reportedly coming from a brand-new remaster of the original 35mm camera negatives, the native 4K transfer boasts sharper definition and clarity with a pronounced layer of natural grain throughout, providing the 2.39:1 image with an attractive cinematic appeal. Whether at the minimalist offices of Gattaca or the home of the two Jeromes, background information is more distinct while the threading and stitching in the clothing are better detailed, and facial complexions are highly revealing with lifelike textures of the pores and wrinkles during close-ups. However, a few sequences appear to be the result of some mild noise reduction with one dialogue scene between Vincent and Irene being the most egregious and blatant, which is at around the 67-minute mark just after Vincent gives a blood sample. But other than that, the majority of the picture is consistent with a stable grain structure.

The cinematography also benefits from the improved contrast and brightness, showing brighter and more vivid whites, which is immediately apparent in the opening title sequence. Specular highlights are more nuanced and subtle but no less appreciable, as the hottest areas come with a tighter glow and metallic surfaces have a more realistic sheen as the light bounces off. Velvety, inky blacks add some depth to several scenes while maintaining excellent visibility in some of the poorly-lit interiors and in the darkest shadows. Meanwhile, the stylized palette favoring greens and warm earthy tones are richer and better saturated, and the familiar yellow tint of the photography feels fuller with an amber-sepia quality, which really complements the story's oddly antiquated atmosphere. Primaries are a tad deeper and well-saturated as well, but the more vibrant secondary hues are ultimately the biggest upgrade and make this HDR10 presentation a standout. (HDR10 Video Rating: 88/100)

Considering this is a dialogue-driven sci-fi drama, it should come as no surprise that the Dolby Atmos soundtrack is largely a front-heavy presentation, primarily focused on the characters and their interactions. However, the design nonetheless benefits from the extra-breathing room with better clarity and detailing in the mid-range while Michael Nyman's unadorned, haunting score enjoys a great deal of warmth and fidelity. Minimal as they are, background activity blends more smoothly across the entire soundstage while convincingly flowing into the off-screen space and into the top heights, forming a more spacious and expansive feel. Atmospheric effects, likewise, are selectively and deliberately employed at key moments, occasionally panning into the surrounds and overheads. Although not enough to create an immersive hemispheric soundfield, they are surprisingly effective at generating a wide, open sense of space that's highly engaging. LFE plays a minimal role, but there's enough bass to give the mix some weight and presence, especially in scenes with the rocket launches. With precise, crystal-clear dialogue reproduction throughout, the object-based track makes for an excellent step-up from its DTS-HD counterpart. (Dolby Atmos Audio Rating: 82/100)

Only the theatrical preview is on the Ultra HD disc while the accompanying Blu-ray carries the same set of supplements as the 2008 release.

Andrew Niccol's cautionary tale Gattaca imagines a bleak future where one's life is fated from birth, but the story never really puts the ethics of scientific progress to task or fully embraces the darkly bitter tragedy of its conceit. Nevertheless, thanks to the excellent performances, strong characters and gorgeous stage design, the sci-fi drama remains a beloved favorite after twenty years. Coming from a fresh remaster, the dystopian sci-fi vision worms its way to Ultra HD with a beautiful 4K HDR10 video and an excellent Dolby Atmos soundtrack, a genetically superior presentation over its HD brethren. Porting over the same set of supplements from its Blu-ray predecessor, the overall UHD package is recommended.