Joe Dante's classic 1984 horror/comedy will be going 4K in October.

Warner Brothers is working on Gremlins for 4K Ultra HD Blu-ray on October 1.

Anyone who lived through the '80s experienced the magic of Gremlins. For everyone else, now is the time to see one of the decade's defining movies, a wildly original blend of comedy and horror. When Billy (Zach Galligan) receives an adorable pet named Gizmo for Christmas, he's given three rules for its care. Inadvertently, he breaks the rules, and a resulting army of duplicate furballs wreaks havoc throughout the town in this endearing and enduring box-office hit.

The 4K release will feature HDR (High Dynamic Range) and supplements will include:

•    Gremlins: Behind the Scenes Featurette

•    Gremlins: The Gift of the Mogwai (motion comic)

•    From Gizmo to Gremlins: Creating the Creatures

•    Hangin’ with Hoyt on the set of Gremlins

You can find the latest specs for Gremlins - 4K Ultra HD Blu-ray linked from our 4K Blu-ray Release Schedule, where it is indexed under October 1. 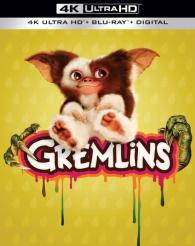