STAND BY ME Headed for 4K Ultra HD Blu-ray

Rob Reiner's classic coming-of-age drama based on Stephen King's short story is getting a 4K upgrade this August.

Sony is preparing Stand By Me for 4K Ultra HD Blu-ray on August 27.

In a small woodsy Oregon town, a group of friends -- sensitive Gordie (Wil Wheaton), tough guy Chris (River Phoenix), flamboyant Teddy (Corey Feldman), and scaredy-cat Vern (Jerry O’Connell) -- are in search of a missing teenager’s body. Wanting to be heroes in each other’s and their hometown’s eyes, they set out on an unforgettable two-day trek that turns into an odyssey of self-discovery. They sneak smokes, tell tall tales, cuss ‘cause it’s cool and band together when the going gets tough. When they encounter the town’s knife-wielding hoods who are also after the body, the boys discover a strength they never knew they had. Stand By Me is a rare and special film about friendship and the indelible experiences of growing up. Filled with humor and suspense, Stand By Me is based on the novella ‘The Body’ by Stephen King. 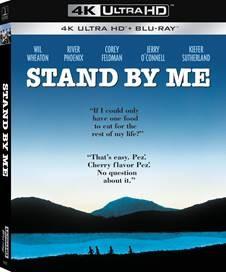 The release will be sourced from a new 4K remaster with HDR and a Dolby Atmos soundtrack and supplements include:

"Walking the Tracks: The Summer of Stand By Me”

You can find the latest specs for Stand By Me - 4K Ultra HD Blu-ray linked from our 4K Blu-ray Release Schedule, where it is indexed under August 27.