Based on the Stephen King novella, Rob Reiner's Stand by Me is an engagingly poignant allegory of self-discovery, confronting trauma and a rite of passage into adulthood. The coming-of-age drama comes home on Ultra HD with a gorgeous 4K HDR10 presentation, a fantastic Dolby Atmos soundtrack and features one new exclusive along with the same set of supplements as the previous 2011 Blu-ray. The overall UHD package is Highly Recommended.

As a fan of Stephen King while growing up, it was pretty much guaranteed I'd fall in love with Rob Reiner's Stand by Me, an adaptation of the famed author's short novella "The Body." And it wasn't simply that the film was based on a King story that sold me. When I saw it in the autumn of 1986, I was quickly captivated by the tightly-knit circle of friends, each of whom were grappling with serious personal issues related to their dysfunctional families. Gordie (Wil Wheaton) recently lost his older brother (John Cusack) and is neglected by his parents; Chris (River Phoenix) is abused by his father and stigmatized by the town due to his family history; Teddy (Corey Feldman) has suffered from his father's PTSD but still venerates him for his service; and Vern (Jerry O'Connell) is bullied by an older brother (Casey Siemaszko). All the while, the town's local gang is led by the sadistic Ace (Kiefer Sutherland), who doesn't like the kids.

It's a lot for young children to deal with no matter the age, but there is something about having to face these sorts of problems during our pre-adolescent years that either makes it more memorable or traumatic. It probably has to do with the fact that those are the years when we are struggling to figure ourselves out, caught in between growing up and still desiring childish activities. Throwing violence into the mix and forced to cope with death while in that hormonal confusion complicates the journey of discovering the person we want to be. The quest to see the dead body of missing boy Ray Brower is essentially an allegory for this loss of innocence with the train tracks serving as a visual metaphor of this treacherous trek into adulthood, as though it were a rite of passage or initiation — dark and twisted as it may be. Life sometimes feels as though heading in a straight route, but as the adult Gordie (Richard Dreyfuss) implies on the kids' return home, there are many roads taking each of them in unexpected directions. 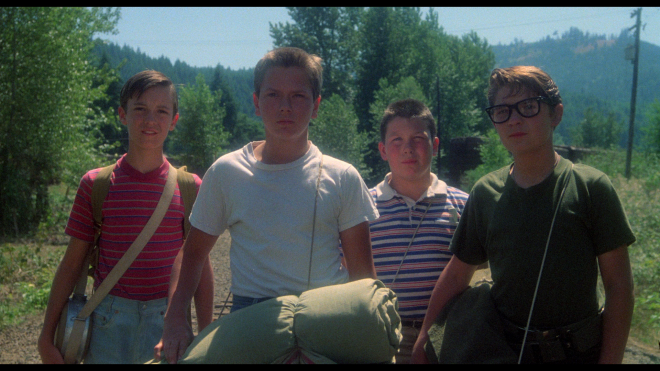 For a more in-depth take on the film, check out Aaron Peck's review of the 2011 Blu-ray HERE.

Sony Pictures Home Entertainment brings Rob Reiner's Stand by Me to Ultra HD Blu-ray as a two-disc combo pack with a flyer for a Digital Copy, which can be redeemed via sonypictures.com and Movies Anywhere. When redeeming said code, users have access to the 1080p HD version with legacy Dolby Digital 5.1 audio. This may change when the movie officially releases next week. The triple-layered UHD100 disc sits comfortably opposite the same Region Free, BD50 disc as the previous 2011 release, and both are housed inside a black, eco-elite vortex case with a glossy slipcover. At startup, the disc goes straight to an interactive main menu that changes screens when switching between the usual options while music plays in the background. 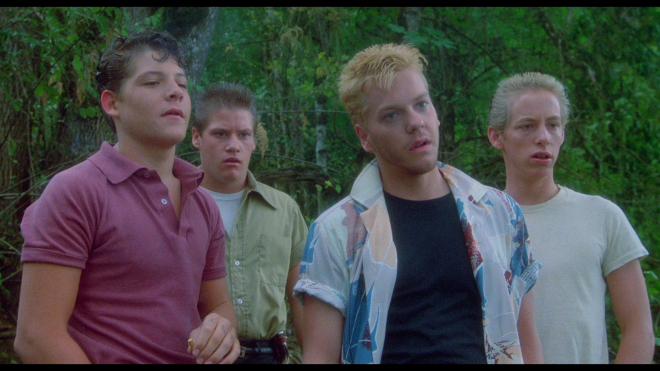 The classic coming-of-age drama goes on a journey through the woods of Ultra HD and discovers a stunningly gorgeous HEVC H.265 encode, leaving the Blu-ray behind to fend for itself against the junkyard dog Chopper.

Remastered from the original 35mm camera negatives, the new 2160p transfer is razor-sharp with considerably better definition in almost every scene. Granted, the stylized photography of Thomas Del Ruth heavily diffuses the highlights to achieve a nostalgic, dreamy feel, but beneath those creative intentions, we can still make out the fine threading in the kids' clothing and the fabric of their camping gear. The individual pebbles and the worn wood of the train tracks are distinct, and the separate blades of grass and the leaves of trees are plainly visible. From the rough beard whiskers of Kiefer Sutherland and the faint freckles on Jerry O'Connell to the makeup work on Corey Feldman and Bradley Gregg, facial complexions expose the smallest pore and negligible blemish with lifelike textures. There are a couple of soft spots here and there, but they're easily excused as the result of age and photography.

The Stephen King favorite also receives a dramatic face-lift by way of improved contrast and brightness, supplying the nearly 35-year-old film with a new lease on life. As mentioned above, this 4K video remains faithful to Del Ruth's hazy, starry-eyed aesthetic, but whites still come through with dramatic, sometimes eye-squinting brilliance, supplying the many outdoor exterior shots of Oregon with a beautiful, looking-through-a-window effect that fans will love. The same goes for the specular highlights furnishing a resplendent glow to the fluffy clouds in the sky, a glistening polish to the edge of metallic surfaces and a crisp, radiating sparkle along the waters while still allowing for excellent detailing within the hottest, brightest spots. On the opposite end, black levels are rich and stygian, which is immediately apparent in some of the casts' hair and outfits. Dark, midnight-black shadows also maintain strong detailing in the murkiest portions of the frame, such as when the boys spend the night in the woods.

Continuing its winning streak, the HDR10 presentation also surprises with a lively, full-bodied array of primaries, starting with the sumptuous greens that bring the gorgeous woody wilderness of Oregon to stunning vividness. In fact, it's quite impressive to see the slight dissimilarities between the various vegetation, some looking a fuller emerald or vibrant shamrock while the pine trees are a deeper, darker shade. Meanwhile, the sky is always a blissfully relaxing, celestial blue while the red of Gordie's shirt is a deeper cherry than the pinkish magenta seen on the Blu-ray. Much of the palette favors earthy, natural tones with lots of yellows and browns, so secondary hues don't display as much of a jump compared to its HD SDR counterpart. Nevertheless, the nuanced differences are enough to provide the 1.85:1 image with fiery oranges and warm yellows in the sunset shots while skin tones appear peachier and healthier throughout.

Awash in a thin layer of natural grain, furnishing the 4K transfer with an appreciable film-like quality, this is ultimately the best the film has ever looked on any home video format. (HDR10 Video Rating: 94/100) 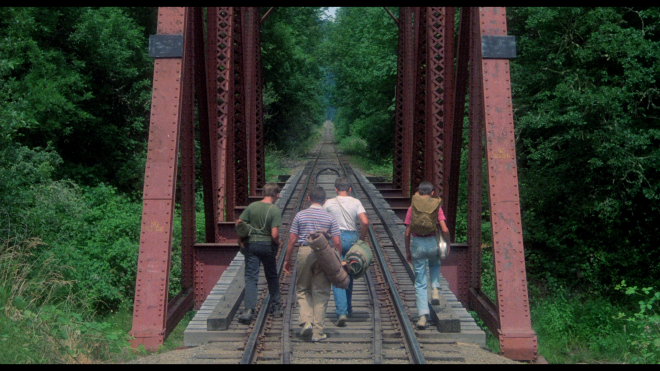 Adding to the enjoyment, this UHD edition of Stand by Me also comes home with three audio options, each providing their own level of enjoyment depending on the owner: Dolby Atmos, English DTS-HD Master Audio 5.1 and English DTS-HD MA mono. For staunch audiophiles, the mono track is excellent with a clean, room-penetrating mid-range and exceptional fidelity.

However, I must admit to being pleasantly surprised by the object-based mix, supplying the story with an unexpected layer of background activity. The local wildlife, for example, is continuously heard in the distance, from the birds singing overhead or the crickets chirping all around the listening area. The wind blowing through the trees or the echo of the trains' air horns reverberate through the surrounds and across the ceiling channels. A few times, the atmospherics can seem a bit overstated and artificial, but not bad enough to ruin or distract from appreciating this otherwise satisfying hemispheric soundfield.

Likewise, imaging feels spacious and expansive, as various other noises fluidly travel between the three front channels and into the top heights, generating a highly engaging half-dome soundstage. There isn't a whole lot going on in the mid-range or ever pushed too far into the upper frequencies, but the mix remains clean with appreciable clarity and distinction, furnishing the song selections with a good deal of warmth and presence. The low-end is not particularly demanding or memorable, which is to be expected from a design of this vintage, but the bass is adequate with enough oomph to provide the trains some weight. With precise, well-prioritized vocals throughout, the Atmos track is a welcomed upgrade and great listen. (Dolby Atmos Audio Rating: 88/100) 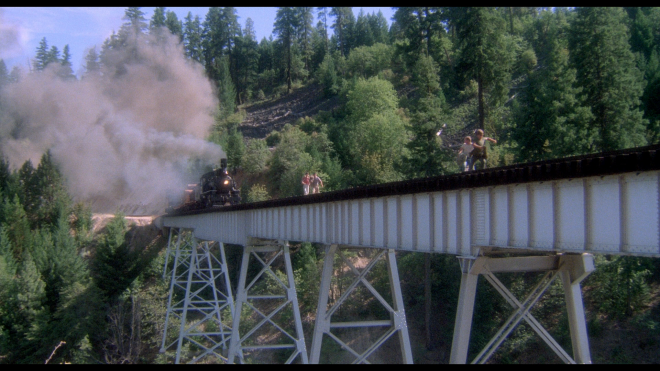 For this Ultra HD edition of Stand by Me, Sony Pictures offers one new, exclusive bonus feature while the same set of supplements as before are on the accompanying Blu-ray disc. 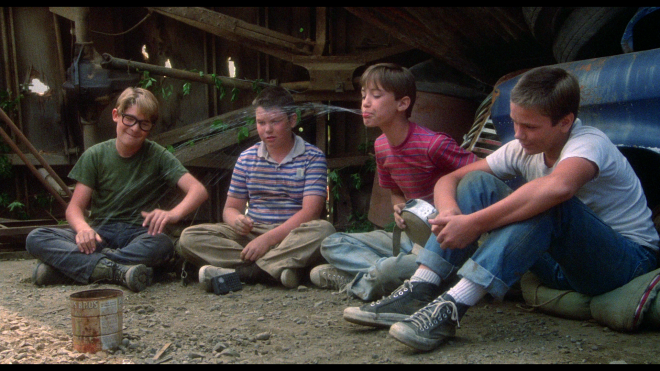 Following four boys while on a quest to see a dead body, Rob Reiner's Stand by Me slowly opens up into more than a simple journey of morbid curiosity. Based on the Stephen King novella, the film becomes an allegorical tale of self-discovery, confronting the challenges of their dysfunctional families and a dark rite of passage into adulthood. The coming-of-age drama comes home on Ultra HD with a gorgeous 4K HDR10 presentation and a fantastic Dolby Atmos soundtrack, making it an exceptional improvement over the Blu-ray and the best the classic film has ever looked or sounded on home video. With one lone exclusive joining the same set of supplements as before, the overall UHD package is highly recommended.

Sale Price 18.79
List Price 30.99
Buy Now
3rd Party 22
In Stock.
See what people are saying about this story or others
See Comments in Forum
Previous Next
Pre-Orders
Tomorrow's latest releases